(+Video) Am talking about how hulls and the editor will be handled in the game, the recent progress on space craft mounts, weapons and camera controls, and how I spend a sleepless night long to code it! (also includes a little status report at the end!)

Today was extremely productive - spent all night coding this nicely working camera and mount system for spacecraft (which was/is a LOT of fun to do) - when I should have either 1) laid down sick in bed or 2) moved my butt to uni courses \o/ It was surely worth the effort:

Each spacecraft has different mount points, which can hold either a camera (green boxes), a weapon or an engine (both red boxes). Weapons and engines can be mounted and dismounted, activated or deactivated for operation (there are already some weapon meshes mounted & activated on the model). By principle it works a lot like the equipment screen in Freelancer. Different cameras can be switched through pressing a key. Such mount points also define where projectiles and other particles originate from.

The things I programmed to make this possible come handy for future applications too: think of manned/unmanned drones or large voxel-based capital ships, where such mounts are also necessary. That also means the models you see there are placeholder assets for now - I dug out the spacecraft model from when I first started out StarFire for this purpose, I still like it a lot so maybe it's going to stay. 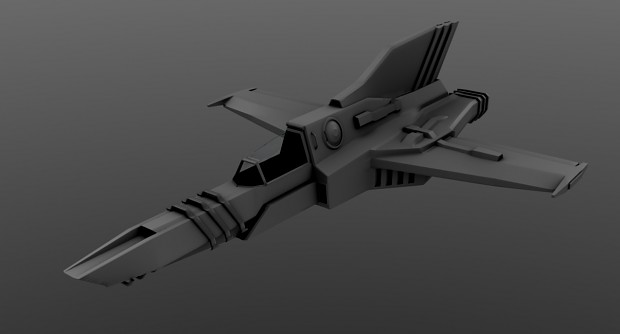 The planned development of the ship editor will be postponed. Highest priority now is to get a basic simulation working for the pre-alpha release. Main reason is that this editor is going to be a huge huge HUGE construction site and I want something playable before starting to work on a gigantic pile of tasks. I will now focus on a more general implementation of a space simulation and use placeholder assets, later then adapt to the editor.

First I didn't want to do anything into the "minecraft" direction at all, but while working out concepts for damage models, hulls and painted hulls I all wanted to integrate, voxels are STILL the best solution. So now, I have decided to code my own blocky voxel engine, however, with a twist.

The thought is to create an engine that acts like a voxel engine, but from a technical view, is not a real one. This is a very experimental concept that is also compatible with the hull concept I worked out, where you can define the composition of your spacecraft hulls (along with the ability to freely modify the interior of your spacecraft).

However, there is one problem here: namely time and resources (and probably feasibility). I might not even be able to pull it off all by myself, or not at all, and even if I could, it'd take years. In a worst case scenario, I will still have the bare bones of a space simulation without a fancy voxel engine. Then I'll focus on exploration and quests creation instead - 'cause I'm flexible like that. (I know this sounds a bit strange now, but its the best way to figure out how resources are spent better, and I sure as hell won't give up StarFire anyway!)

Gameplay
includes, well, gameplay, most trivial case being flying around in your spacecraft and shoot stuff. Recently done some progress here by finishing off a rough layout for camera controls and spacecraft mounts.
------------------------- Progress: ~10 %

Deployment
includes a functioning website and internet based services. Looked into this, but honestly don't think I'm ready yet to do anything in this direction (I'll wait till I made some progress with the gameplay).
------------------------- Progress: ~5 %

Thanks, glad you think so - it's very rough work at the moment