There has been a lot of progress with Soul Saga over the past month. The most exciting part of this update is the working combat system! 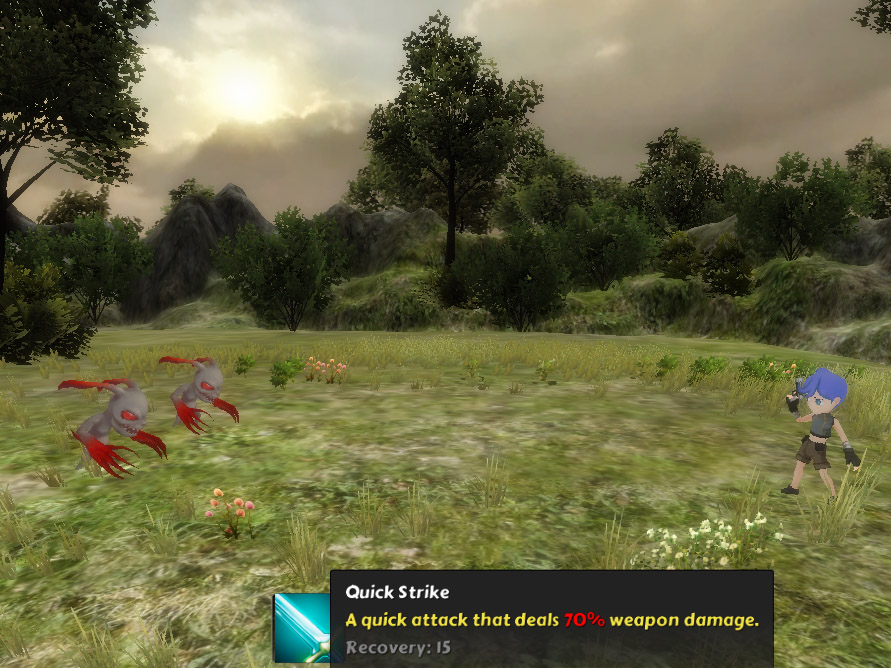 There has been a lot of progress with Soul Saga over the past month. The most exciting part of this update is the working combat system!


If you've ever played a turn based RPG, like Final Fantasy 10, then you'll understand how this type of system works. When it's a character's turn, the combat stops and waits for that character's actions. You can see from the above image how this kind of looks when it's the player's turn. The player chooses from their current character's available skill icons (at the moment only 1 skill is available).

One thing I dislike about several RPG systems is having to replace your favorite weapon with one you don't like. The following pretty much sums up my experience with almost all RPGs:

I can't promise that you'll love every weapon you see in Soul Saga, but I can promise you can always use the one you DO love, and not be forced to bludgeon your enemies with an ugly stick of doom. And if you're the type of person who REALLY likes to switch up your combat style often, then you'll love that weapons and clothing don't take up any inventory space! When you unlock vanity items you can use the dressing room to switch up how your character looks!

You might be asking at this point "well, what if I don't WANT to use a weapon? Or what if I want a pistol? Or a frying pan? Or a stick of pickled bologna?!" This is ALSO a possibility in Soul Saga. Since Weapons are just vanity items, and do not effect stats, you can be a bare-fisted martial artist, a pistol wielding gun slinger, a rifle shooting maniac, or a bludgeoning bologna slayer (well, if the item is actually in the game... hmm the possibilities).

This concept also goes for the clothing. If you want to save the universe with no pants on, then by all means do so! Clothing, just like weapons, is simply for visual appeal, and does not effect stats.

Soooo... if weapons and clothing don't effect stats... then what the heck does? If you've ever played a game like League of Legends, you'll have seen an inventory system that works similar to Soul Saga's equipment. Besides your normal inventory, you will get an equipment pouch, which are the items that will affect your stats in battle. If you want to use a consumable in battle, it must also be equipped in your pouch. These items don't change anything visually about your character, but are the actual bread and butter to getting your advantage in battle.

Battle consumables are things such as potions or snacks that are used to give you a powerful but temporary edge in battle. For example, there may be a sandwich consumable, where if equipped, allows you a 1 time use to immediately recover 10% of your HP. There may also be an edible "wall-nut" that, after consumed, reduces incoming damage by 50% for 5 turns. The exact items haven't been set in stone, but there's a long list I want to implement. The main point of these consumables is that they slightly handicap you by taking up an inventory slot that could otherwise be used to increase your stats, but will allow you to develop more strategies around possible encounters while exploring the dangerous universe of Soul Saga.

After dropping all that awesome news on you, I unfortunately also have to state a possible doom for the character customization... The reason I was not able to deliver a video to you this month was because of some dire issues arising with the complicated outfitting of the human models. The animator that has been working on Soul Saga spent the last month working very hard on the Humans, but this eventually ended poorly as real life issues and lack of complicated rigging experience got in the way. Unfortunately, in the end, the animator was unable to figure out how to deal with animating all of the outfits a character can have. This set back has put character customization on review for the chopping block.

However, there is still hope to keep the character customization system alive. I have put a different animator on the job of the humans, while the original animator will continue to stick with animating the enemies (and he's doing an amazing job at that). I will keep you updated on how that is going over the next few weeks via Soul Saga's Facebook, Twitter, IndieDB, and Google+ pages.

Nice! The music style reminds me of The Legend of Zelda, great job!

Thanks Dexter. It remind me of Legend of Zelda as well, and also parts of it sound similar to many other older classics.