A new update on the SHMUP Creator, making light on a non sexy truth about game development: we spend most of our time fixing bugs and writing new bugs! I'm sharing last month bug list to illustrate the kind of work I do those days.

March was a “bugs fix” month.
I’d like to say that my code is so clean I never see any bugs, but it would be a big, big lie. After a while, the code get bigger and bigger, more (too) complex, and each time I do some work somewhere I can break something elsewhere. It’s sometimes quite stressful
This month I fixed some old and very annoying crashes and bugs, and it felt good.
To illustrate the kind of non-sexy work I do those days, this is my March list:

(OK) – f9 don’t hide the background collisions preview boxes
(OK) – backgrounds collision boxes preview is broken
(OK) – if we are editing a collision box, “Focus on selected” doesn’t work as expected
(OK) – the speed decrease at the end of a spline for enemies doesn’t work for every case: refactoring needed
(OK) – prevent user to move the first waypoint of an enemy
(OK) – the selected collision box doesn’t blink anymore
(OK) – the sprite preview in the collision panel is not big enough, depending of the picture ratio
(OK) – if there is no collision, update the collision panel anyway (to avoid old pictures in the panel)
(OK) – hard to select some sprites on screen: bug in the rendering order part of the selection
(OK) – when we stop shooting, the laser sound should also stop
(OK) – add a sound and a default particle effect when we create an SFX
(OK) – double click on text to rename doesn’t work well
(OK) – when we reload a scene, the sprite rendering order is not the same. It should.
(OK) – the transition to a waypoint Aim should use aimSpeed
(OK) – after a checkpoint and a level restart, the music should not stop
(OK) – there were an old default explosion for the player (playing at the same time as the real one): remove it
(OK) – if the player dies and one stray bullet kills the last enemy: we should not win the game
(OK) – if we select several weapons, display the red outline around all of them, not only the last one
(OK) – there were an old default material on some objects adding error message in the log: re-export the weapon objects
(OK) – if we use another window for a while and come back to the SHMUP Creator, the frame rate is too fast for a few seconds
(OK) – if we minimise the SHMUP Creator and maximise it again, the camera scroll bar is moved to the center of the screen
(OK) – waypoints flip flop : the icons are inverted
(OK) – the thumbnails of the background assets are not displayed anymore in the game box
(OK) – transform panel: a lot of issues :/
(OK) – undo position: some waypoints manipulators are showing up even if we are in weapon mode
(OK) – if we select the first waypoint and another one, we can moves the 2 waypoints. We should never move the 1st one.
(OK) – a lof of issues with objects duplication in the editor, because of bad vectors code
(OK) – crash only in release with undo and weapons
(OK) – crash with vector when selecting an enemy after deleting others + crash changing tab in the editor panel
(OK) – crash with undo after translating a weapon: seems to be because of the waypoint manipulator bug

It can give you an idea of what is feel to work on a tool, and why it takes time.
What a great hobby, coding tools and engine! The last 3 crashes where a pain to fix, but at the end, it felt good to be able to find the issues and correct them.

Also:
I made progress on the beginning of the 2D level and on the end of level boss and added a new Kill trigger. I also modified the default grid snapping behaviour with multi-selection. 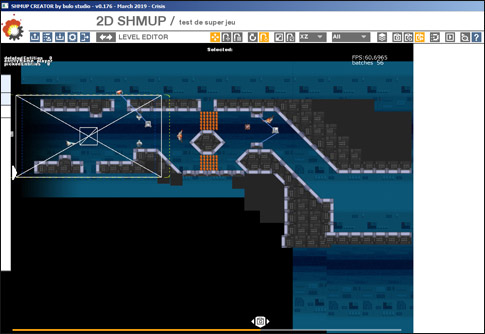 Hey! haha working on tools is hell.
I've been working on a framework for Unity, meant to simplify the process of creating heavy UI... Well "each time I do some work somewhere I can break something elsewhere. It’s sometimes quite stressful" i know that feel :)
Now i stopped working on it, after one full year of dev, and never released it... Anyway.
I found your post by searching press mediums to release a shmup i'm working on (still on Unity).
Making the engine for my shmup is really hard, specially the process of design. Each time you make a choice, you open some doors and close some others. Haha i can not even imagine the complexity of making an engine for shmups meant to be used by other devs.
I wish you best of luck !