A bit of backstory about one of the if not the most important level in the mod yet!

Hey yall, I tried to post this once but I think I somehow butchered it and it didn't get posted so yay!

Aaaanyways as we are getting closer and closer to the release of this custom story I think it is time for me to talk about some of my favorite levels. Today it is going to be the Servant room. Why is it so important? Well because the thought that there should be not only multiple endings but multiple paths leading up to those endings came up for the first time here. This level will be the divider between the two paths and you will be able to decide which path to take based on which puzzle you complete. Also this is the level where I developed the Dynamic Monster Encounter system which I intend to use on other levels (not completely replacing scripted monster encounters) and also I was playing with non-note based story telling for the first time. But the level has quite a rich backstory which I want to tell you about.

The first stop of the level's history is back in the original mod. It was meant to be like the prison levels in the base game that is kind of the climax point in terms of horror and story. spoiler alert, it didn't end up like that. First of all, the execution was buggy at best. Some rooms could hardly be accessed because of the level design (floor candles were blocking some doors for example) and the level was basically polluted with monsters. You could expect a monster to come after exiting every room. Also since the story of the original mod was a disaster, the big reveal of the story was dumb. Who would have thought a secret servant society was a bad idea in a story?

So when I finally decided to remake the entire mod back in august, 2018, I did not know what to do with the level. It was in such a bad shape that it would have taken a long time before I fixed everything and bring it up to standard in terms of visuals. And even then, the story was taking a whole different shape from the original and I didn't know if the level was even needed for the story. This lead to me brushing it aside and working on it after I was done with the main puzzle at the Underground castle. Now to understand where it is in the story CURRENTLY, I have made a very professional™ graph of the current level layout: 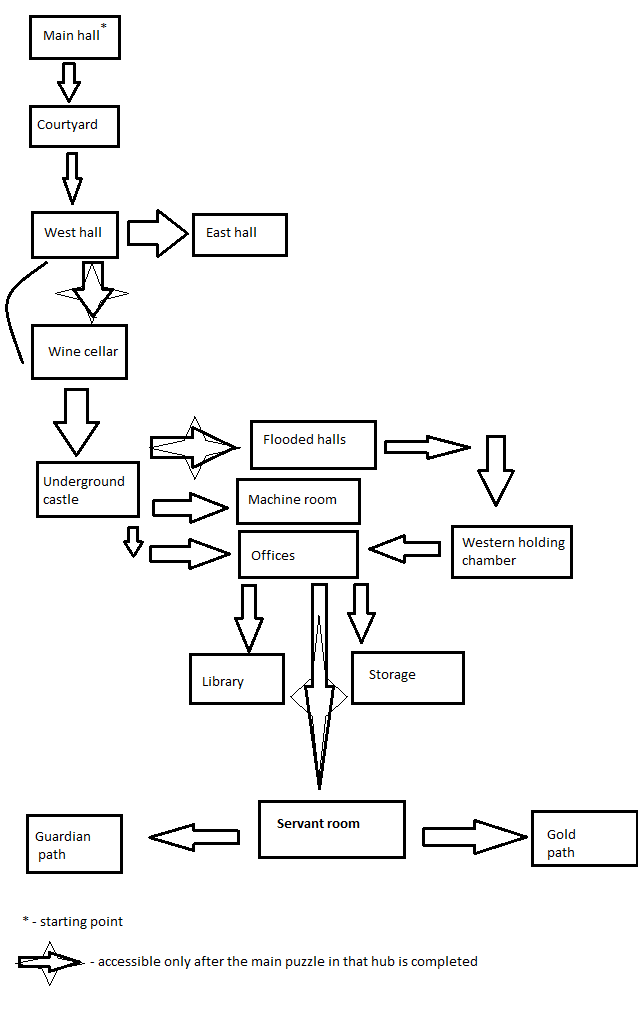 (Note: the Offices part is a bit misleading, so as a clarification, first the Offices is a side-level of the Underground castle, but you return to it after Western holding chamber, when it becomes a hub level)

Now, after a careful studying of the picture, you can ask, why are you talking about a level that is so far from the Servant room? Well because at this point in time, the Servant room was a side-level of the Underground castle and a part of the main puzzle there.

The level itself remained in its non-reworked state until the second stop when I decided to rename the level to Church because of story reasons and entirely remake it from scratch. I have worked about a month and a half on it and the end result was a prison or dungeon level that was a bit mazey filled with monsters and such. I even envisioned a cool part where you had to kill the monster chasing you from the Offices all the way to the Servant room to escape back to the Underground castle and finish the puzzle. I started making it and had a basic prototype in mind for it.

Unfortunately as the custom story got longer and longer, I realised that such a level would be way too early for the pacing and decided to give it its original name back and place it to the TBD(to be decided) pack alongside the outside area from the original mod (that later became the Courtyard) as well as the starting house (that was scrapped when the Main hall was introduced) and make an entirely new Church (don't worry, I still have plans to make a level where you have to kill the monster ;) ).

My vision for the Church was a library with Junstine feeling to it, that had a puzzle which granted you access to a lower level, where there would be a small torture chamber or prison segment with some story revelations. The puzzle had 3 iterations. The first was a simple find a button to open a door in a maze-like library while the monster is searching for you, the second was with 3 buttons and the third the same but whitout a monster. Experimenting about which puzzle would be the best has taken way too much time for me however and when I realised, I rushed an underground part for the level so I can feel like I have made progress on the mod but I did not know what to place there.

I made it into a chase sequense like the one in the base game with the Kaernk before entirely scrapping Church because I felt like I could not get it just right unlike other levels. It got written out of the story and the puzzle and got boarded up in its hub level to honor its former existance.

Couple of months pass and I almost forgot about Servant room in the TBD pile, when I got to the part when I needed a prison level. I almost started making a new one when I was like: oh yeah, I have this one prison level put aside for later use that would come in handy at this time. So I brought it up, polished it a bit and called it a day. The problem was that at that time I was experimenting with the Dynamic Monsters that meant Dynamic Monster Pathing, but the level was designed with not that in mind. This resulted in a lot of headaches because at some points, the monster would just get stuck or simply vanish (I guess because of the game's engine unless somehow it found a way to fall off the level somehow). Thankfully before I had to completely redesign the whole level to support Dynamic Monster Pathing I got the first playtesting results back, which I wrote an article about back in like January. You can read it but in short, the biggest finding in it is that players get frustrated when they get killed by the monster over and over.

So I scrapped the Dynamic Monster System entirely and added a few Scirpted Monster Encounters to the level and started working on the puzzles. From the start I knew that I want this level to be the dividing hub level between the two paths you can take in the story so I designed the puzzles that way. During that time I got the chance to experiment with new game mechanics and system I have never thought I would before (you can't imagine how much work goes into making a text appear when you look at a door, but not show that text from accross the level). Then I moved on from the level for a few months, making the Sewers, Asylum and the Torture chamber.

When I returned to the level like a week ago I did it for one particular reason: Dynamic Monster Encounters. I wanted to make a monster that is there to feel like it is constantly patroling around the place but still leaving room for the player to breathe. In about a week I have developed the Dynamic Monster Encounter System (or DMES for short) that, as I mentioned will not entirely replace the scripted sequences but I will certainly use in the future with some tweaks to it because right now it is rather simple.

And that is pretty much it. A random level, that has almost been scrapped became one of the most important levels and corner stones of the custom story and probably my most favorite level to work on. Also a fun fact: I usually use the Wine Cellar when I'm experimenting with something but this time I did it on the Servant room because I was making thing guarantied to be on that level, while the Wine Cellar is in the middle of big changes.

Thanks for reading this article. I hope you enjoyed this type of "update" more than the ones previously. It gave me a big oppurtunity to talk about the mod while giving a small update on what I have made recently but most importantly, I had fun writing this :D You can check out some of the uploaded images not only about the Servant room but some of the others. Unfortunately the pictures don't give enough justice on how much I love this level :(