These past couple weeks we've been shoring up all of our web functions, so that we can create a more social experience for our players.

These past couple weeks we've been shoring up all of our web functions, so that we can create a more social experience for our players. We recently added Notifications, but that was just the first phase! We are now in phase 2, which brings some much-needed updates to the creator browser and the profiles page. And phase 3 is in the works! So, what's coming down the pipe today? LET'S DIG IN!

OKAY, let's get this one out of the way because IT'S THE BEST. You can now choose among 14 starting avatars to represent YOUR FACE to the rest of the world! Currently, your avatar is displayed on your profile and your Creator Card (we'll get into that in a bit), but we plan on expanding the rest of the game's UIs to display your avatar in most places where your name is displayed. 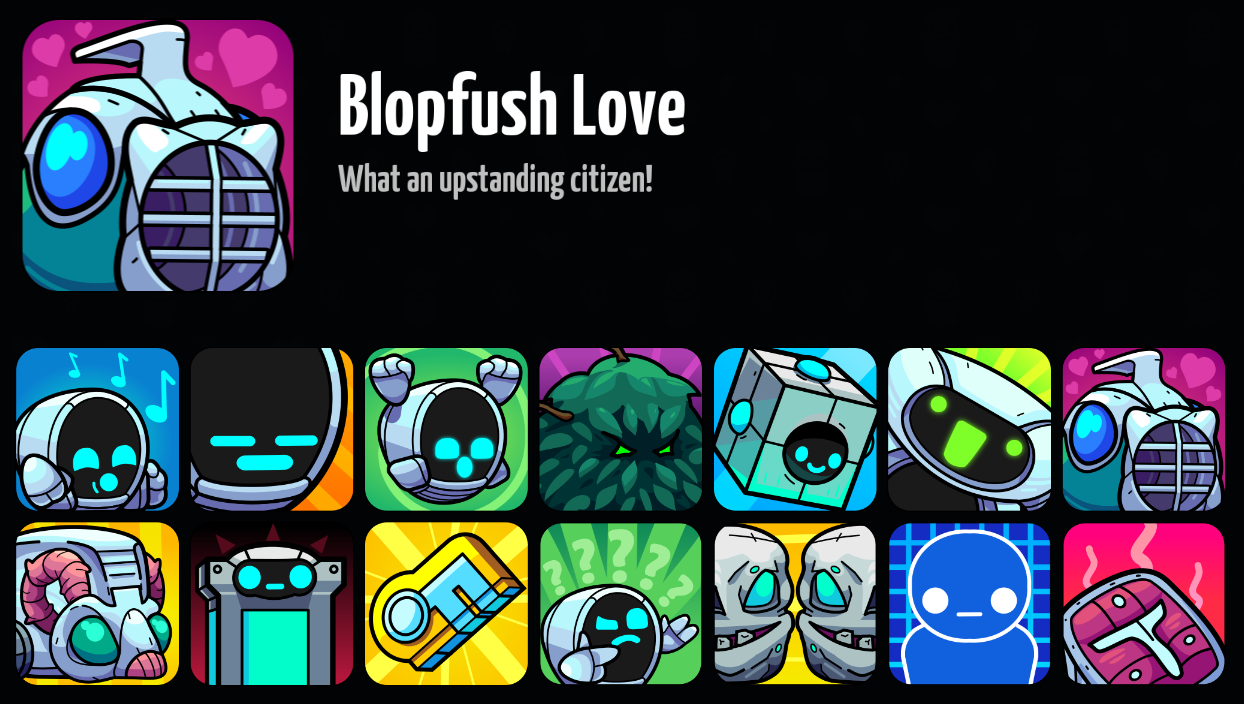 We're starting with these 14 avatars, and we are working on adding unlockable ones as well for a future patch. After all, what's the point of achieving things if you don't get an avatar to show for it?

The profiles page has been in need of an overhaul for QUITE SOME TIME. So we did that! We're not fully finished with it -- we'd call this the halfway mark -- but it's already looking a lot better! We've also added some additional stats to the profile page, so you can get a better snapshot of how you're doing. We even added tracking for Exposure Bucks tipping, so you can show the world how GENEROUS you are! 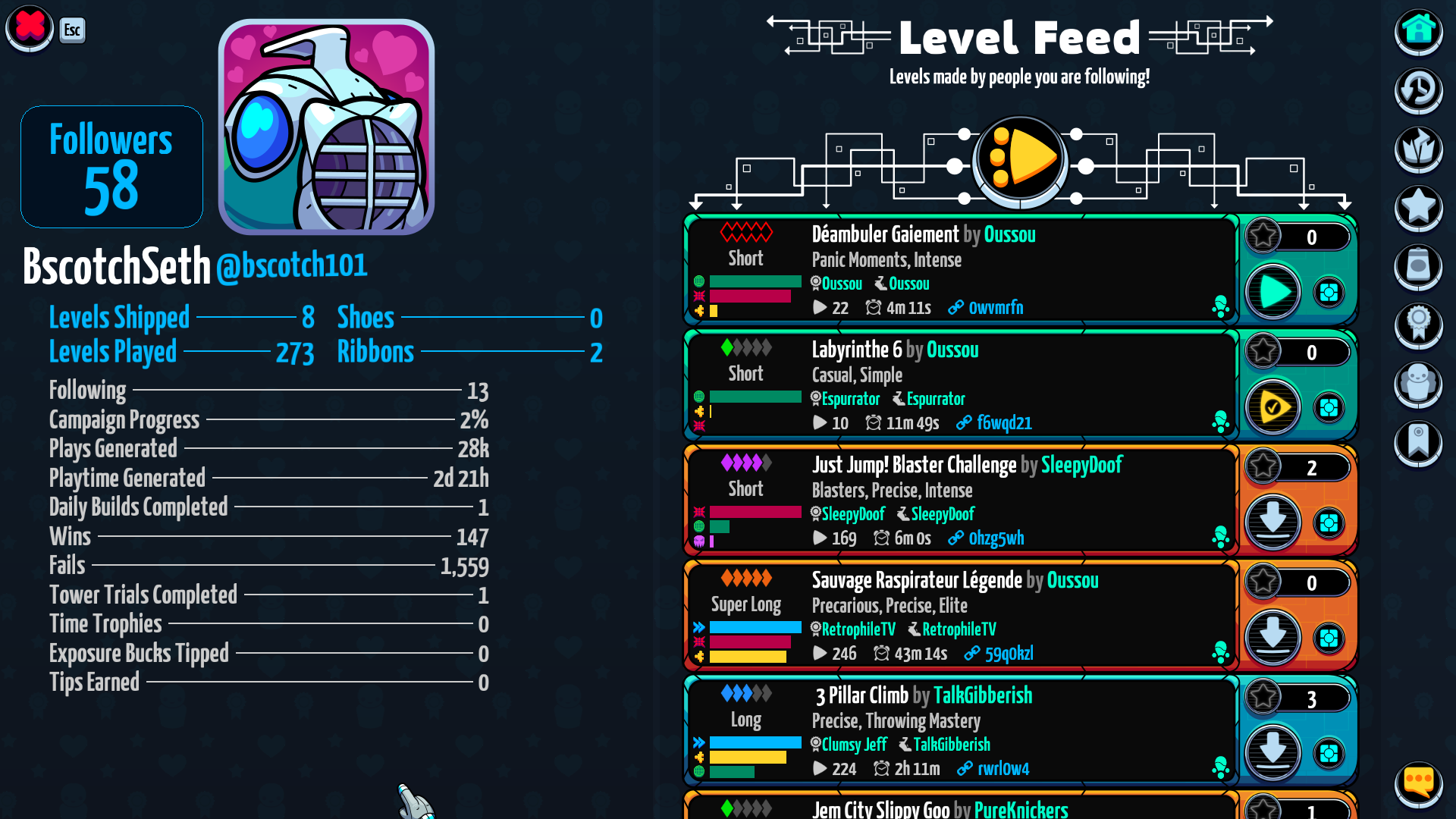 If you want to update your avatar, just click on it on your own profile page.

A "Creator Card" is the UI element that represents you to other players. The old creator cards were, in a word, UNFORTUNATE. So we ripped them out and made them smoother, shinier, and prominently feature the new avatar system. Take a look!

You may notice that we're also highlighting the "Followers" count. Previously, we had two buttons -- "Buddy List" and "Subscribe." This was confusing to many people (what's the difference between these two lists?), and we also had a cap on how many people you could subscribe to, so we didn't overload our servers. So in the past, the idea of "following" or "subscribing" to someone was a sort of secondary thought, because those systems were too weak. This was unfortunate, because we think that the power of a game like Levelhead is in its ability to bring people together to share the things they made. Naturally, a "Followers" type system is the right tool for this job, but we hadn't invested in making that concept strong enough and emphasizing it enough.

This patch is the start of bolstering the power of the "Following" system. For starters, we are doing away with "Buddies" entirely, and merging "Buddies" together with "Subscriptions" and calling the new list "Following." Now, you just follow people! And we have also removed the limit on how many people you can follow, to pave the way for the next patch, which seeks to make this whole system more robust. We don't want to say too much about that just yet, but... it's coming!

To go with the updated Creator Cards, we wanted to make sure we were showcasing them in a better light. So we updated the visuals of the Creator Browser to go with the new Profile page! 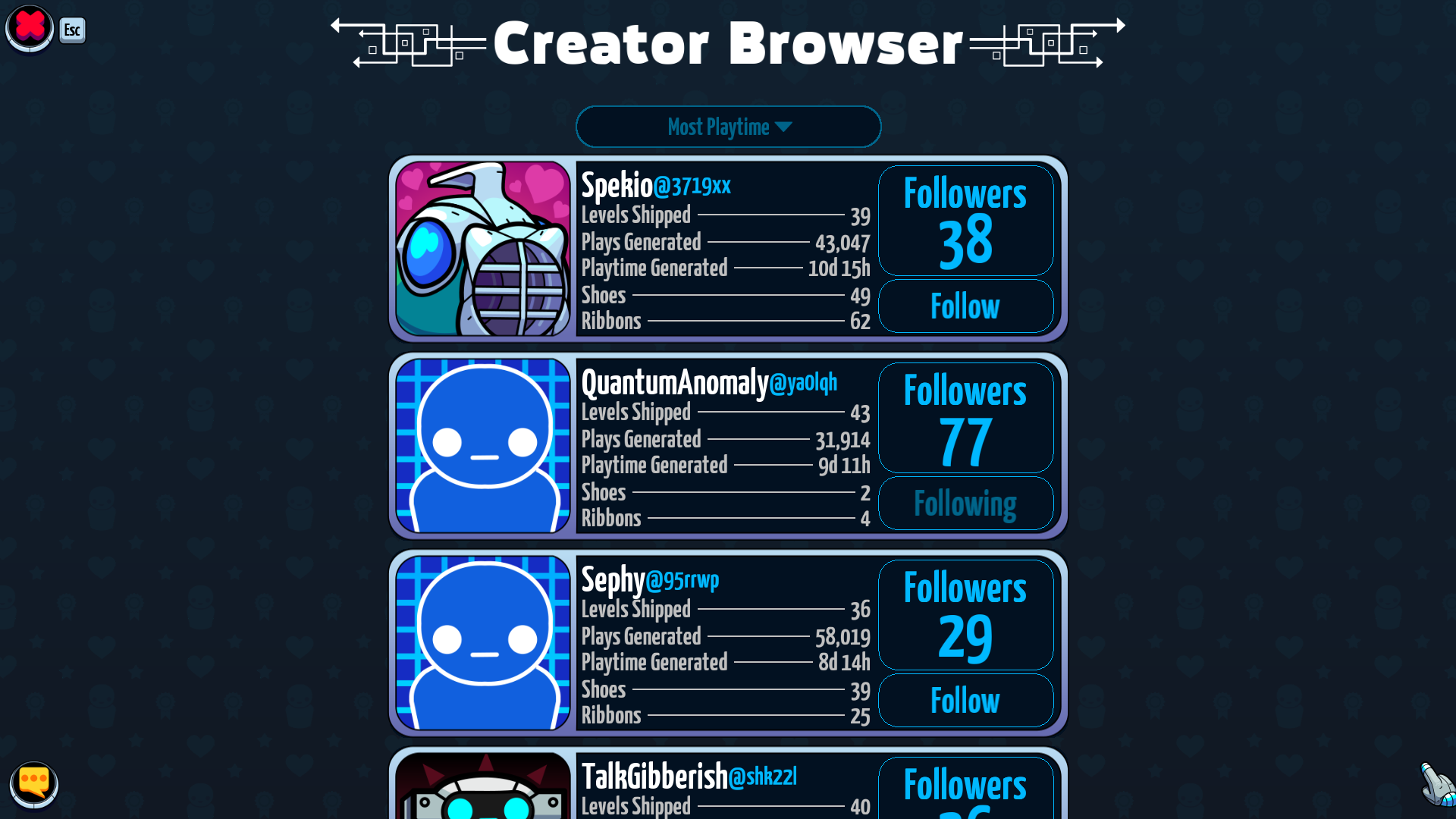 We also added numerous sorting options (up from the previous two), so you can see things like who is the most prolific creator, who has the most followers, etc...

But we didn't just spend this whole time on web and UI updates! We also managed to squeeze in some gameplay tweaks as well!

First, we expanded the "Enclosures" system -- the ability to create secret areas in your level -- by adding more types of enclosures. Now you can have a secret Spookstone, Rickety Wood, or Kronkrete area!

These types of enclosures are also independent of one another, so you can have secrets bumping right up against other secrets. Time to DECEIVE EVERYONE!

We've also added a new item called the "SECRET EYE!" It's an invisible item that is controlled by a switch. When it becomes activated, it will reveal any secret enclosure that it is inside of. So now, instead of requiring the player to "face check" for secret areas, you can reveal secret areas based on triggers and switches!

You can even use this system to "lock" secret areas as being always visible once the player enters them. Or maybe put the Secret Eye on a path, and have it reveal multiple secrets in sequence! Hey, do whatever you want. IT'S YOUR LEVEL!

For you Metroidvania builders out there, we've got just the thing. MULTICOLORED KEYS AND DOORS!

You can now better control how the player moves through the level, by harnessing the power of colors! For example, maybe you have four locked doors in the same area, and the player has to go through them in sequence. With colored keys and doors, this is now super easy, whereas before, you'd have to come up with some kind of elaborate switch contraption to ensure the doors unlocked in the right order.

And some other stuff!

We have a bunch of other miscellaneous improvements and fixes in this patch, so don't forget to check out the patch notes! Also if you have not bought the game yet, grab Levelhead over on Steam or download a free demo on Itch and make some levels :D