As you may or may not have noticed, there was no news post last week. Don't worry, it's not because I wasn't working on the game. In reality, the work I was doing was such a large amount that I've held off until this week where I had more to show you.

If you've been following the game from the early days, you my have noticed that the game has gone from 2D to 2D with faked parallax, to 2D with real parallax, and now what you'll see in a minute. I get a lot of messages about making the game in 3D, which I've honestly thought about. Opening gameplay up into the 3rd dimension allows for a lot of things: pulling alongside a ship to broadside it, larger areas to explore, more interesting land formations and so on.

So last week I started playing around with it to see if I could make a nice looking water shader. After all, if the game didn't have one they why bother with 3D? That brings us to here (these are pretty big gifs, so apologies to those with slower net):

After that I spent awhile trying out different texturing styles for meshes (I still am too).

What's the second most visible thing in the game after the ocean? The player model, of course. So that's what I started next. Here was the first texture I did for it. 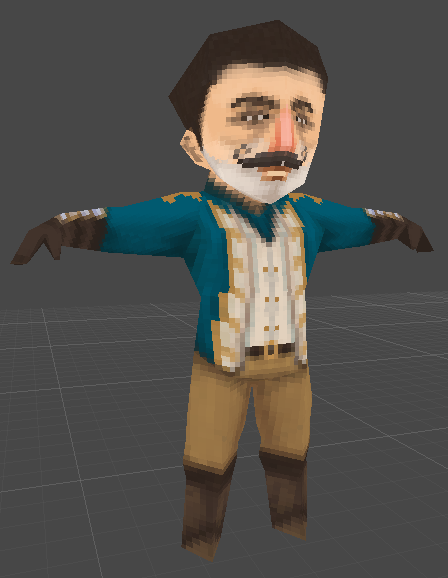 Got some comments about the eyes being too creepy (which I agree with in hindsight), so I redid them afterwards. 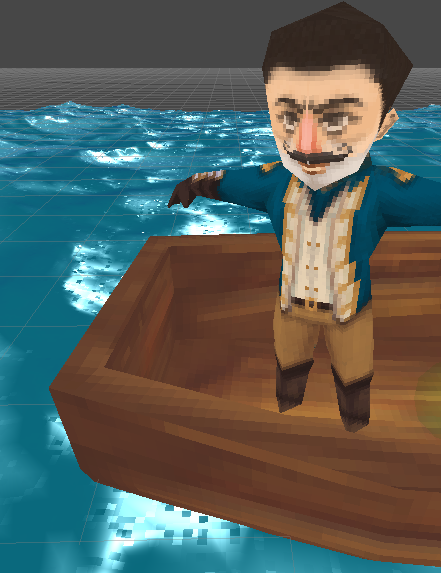 From there I set about rigging the character and all of that, as you can see here: 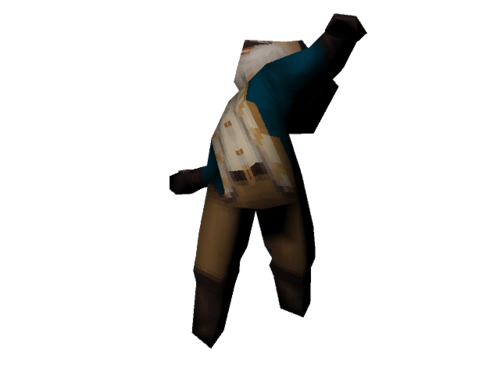 And finally here's a gif of the player standing on the water as waves roll by.

This week I'll be seeing if the gameplay in a 3D world is fun enough to warrant the transition to it. Last week was spent on mostly visual things to make sure I could make the game look nice enough, so this week it's all substance stuff.

There's no new build out this week in light of all these testing scenarios. Next week might have a build, though whether it's of 2D or 3D will be determined by how this week goes.

What do you all think? Do you like the way the 3D world looks? Are you excited at the thought of what the open world would allow? Do you prefer the 2D world over this one? Let me know what you all think.

That looks really cool!! Love it!
I have played around with the 2D version (found it at the screenshotsaturday) but I think it would be even better in 3D.
Looking forward to seeing more of that.
Ah yeah and you could give him a pair of feet maybe ;)

He has two wooden feet

He's got little pointy nibs at the front of his feet. Might be kinda hard to see.

Wow, I'm amazed, great transition man, it's definitely what it needs! Although you could always produce the 2D and 3D version?

This is a pretty radical redirection. Looks good, though. :D

reminds me of Wind Waker :D

My first thought: Where did the 2D go!
I really like 2D and I especially like the pixel art, which you seemed to be making in great detail ( even your 3D models looked like pixel art ). I also like the challenges and the solutions to making open worlds in side-scrolling 2D. They always surprise me.

But after looking at the image for some time I saw that you kept some of the old style ( The pixel art ). And a game like this would fit a 3D world.

So I got in doubt. Whatever you do is fine, because they both look amazing. You should just keep it in this "pixel art"-y style.
And if you decide to keep it in 3D, just make sure it isn't becoming just another 3D game.

Keep at the good work! I hope you make the right decision!

WOW! I mean really WOW this is great! I would make the combat Assassins creed like. Easier to program, A is block, timed parries result in counters, and B is to attack in combos.

It's a surprisingly huge change, but good job so far translating the old style into 3d! I like that it's a 64-bit style, which I've rarely seen recreated (unlike all the 8-/16-bit stuff). The only stylistic critique would be the water, but I'm not sure how you'd make it more N64-style, except maybe less polygons (if you can do that easily in Unity)

I think either 3D or 2D could be a lot of fun (exploring, sea warfare, etc., should work just as well in 3D--probably better in some cases). It seems like development of 3d assets might be a lot more work, though (especially for one person). Are you thinking about getting some extra help?