A launcher for ScrumbleShip is in the works, but is delayed due to a critical library bug. 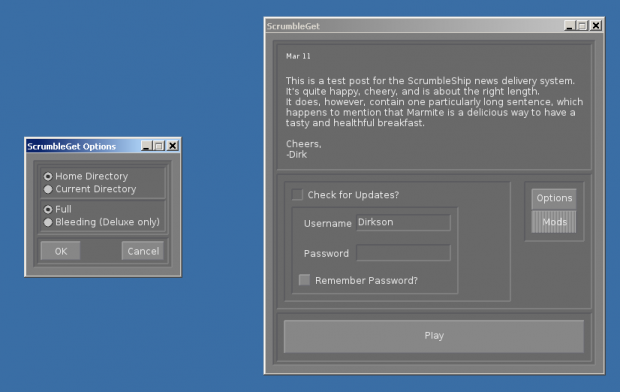 It also downloads the music separately, keeping the average update download under 5mb for major versions, and under 1mb for bleeding edge versions. The launcher itself is a trim 500kb, and even has a mini-news displayer that should help me stay in better contact with the community.

In the future it will assist people in submitting bug reports when the game crashes, telling them exactly what it's sending.

Unfortunately, it has one major problem: It doesn't do windows. The GUI library I chose has a critical bug on Windows 7 and 8. I've been working with the library's maintainer to get this fixed for some weeks, but progress is slow. If I'm unable to get it solved, I'll think I'll have to switch the GUI to SDL, as there seems to be a lack of cross platform C GUI libraries.

I've been holding back the official 0.21 announcement until this bug get solved. I may wrap it in with the 0.22 announcement at this point.

It does function perfectly fine on Linux and older Windows computers, and ought to function under Mac OSX without difficulty.

A fix for the windows bug may come any day now, and the moment it does I'll be able to release the launcher, and make ScrumbleShip much easier for the average person to install and update.

I learned the hard way how managing your game exes cross-platform compatibility, libs and pre-game engine coding is quite hard; keep it going fellow lone wolf, soon these issues will be history.

You might want to check out Qt. It's a very popular, free, cross-platform GUI library.

QT is huge, and cannot be statically compiled, which makes it poor for a launcher - I'd have to distribute large dlls alongside it, rather than have a small standalone exe.

It's also C++ only, which is a pain to switch to... But the current forerunning option ("fltk") also requires me to learn some C++, so that's not such a big deal.