An air superiority fighter from several decades ago.

Since the last update, a lot of new aircrafts have been done, a few of them have already been revealed in some way, however not all these new aircrafts have they family fully completed, so that is why they are taking some time to be present.

And that is where the Mirage F1 comes in, as it is one of those families that is entirely completed and already in the game.
For those o know, in the list it was present some time ago about which aircrafts will be in the game, it was stated the mirage family was in. What didn’t specify, was which unit it was, the mirage family is too big to be grouped in a single collection, so it was divided smaller groups. The Mirage 2000 is the most common in games and is guaranteed that will be in, but besides that one, the Mirage F1 also fits perfectly in the timeframe that game tries to focus and is far less usual to be present, so it was selected to be in as well.

The first version of the Mirage F1, this version was developed for flight testing. It uses the Mirage III radar; it can be identified by the shorter rounder nose. 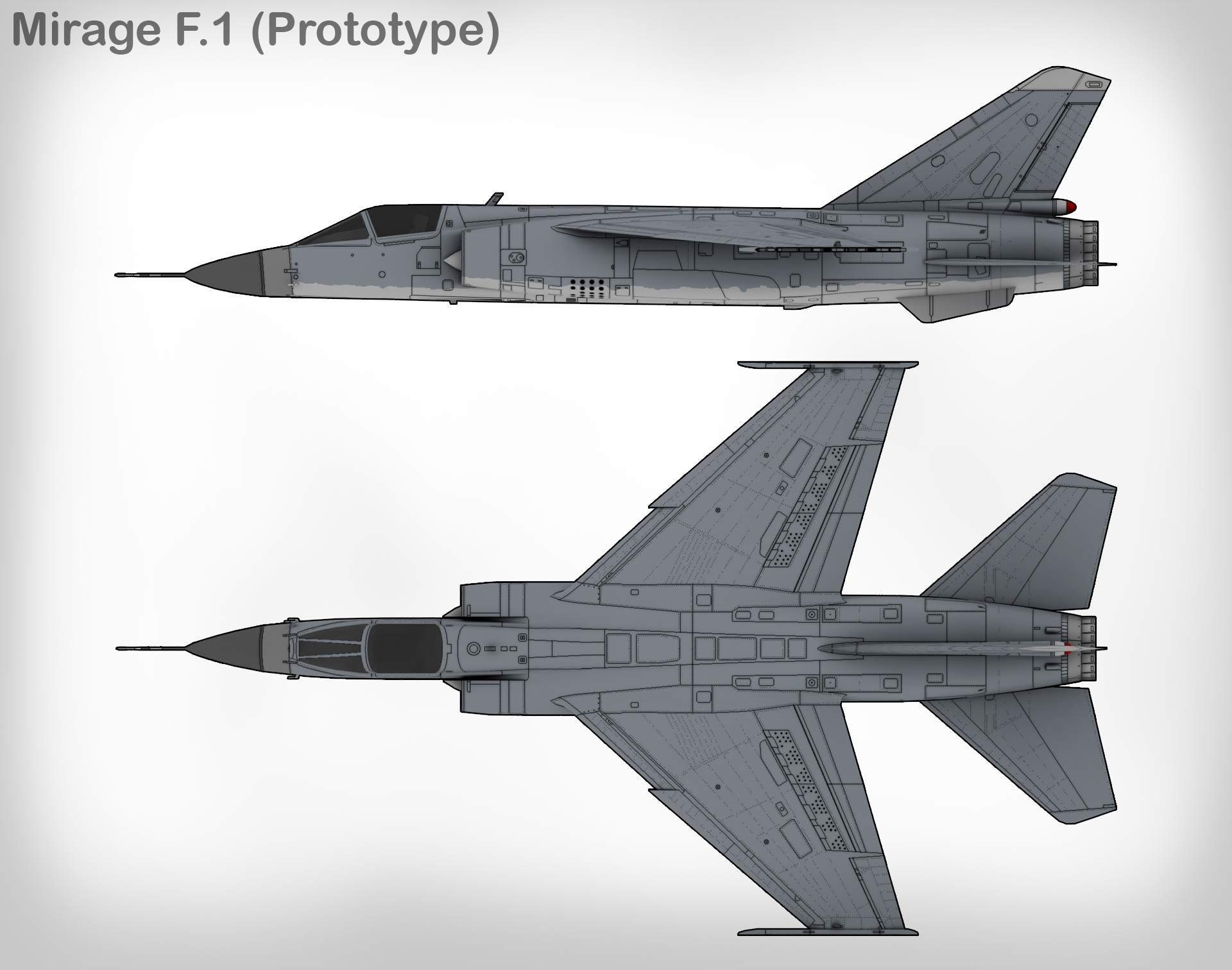 This is a fighter version with the most basic package for air combat and as expected it has weaker avionic from the rest of the family.

The main and most known version of the Mirage F1 is the C variant with the latter C standing "chasse (fighter)". This version has the finalized design that will be very little changed over the next variants. 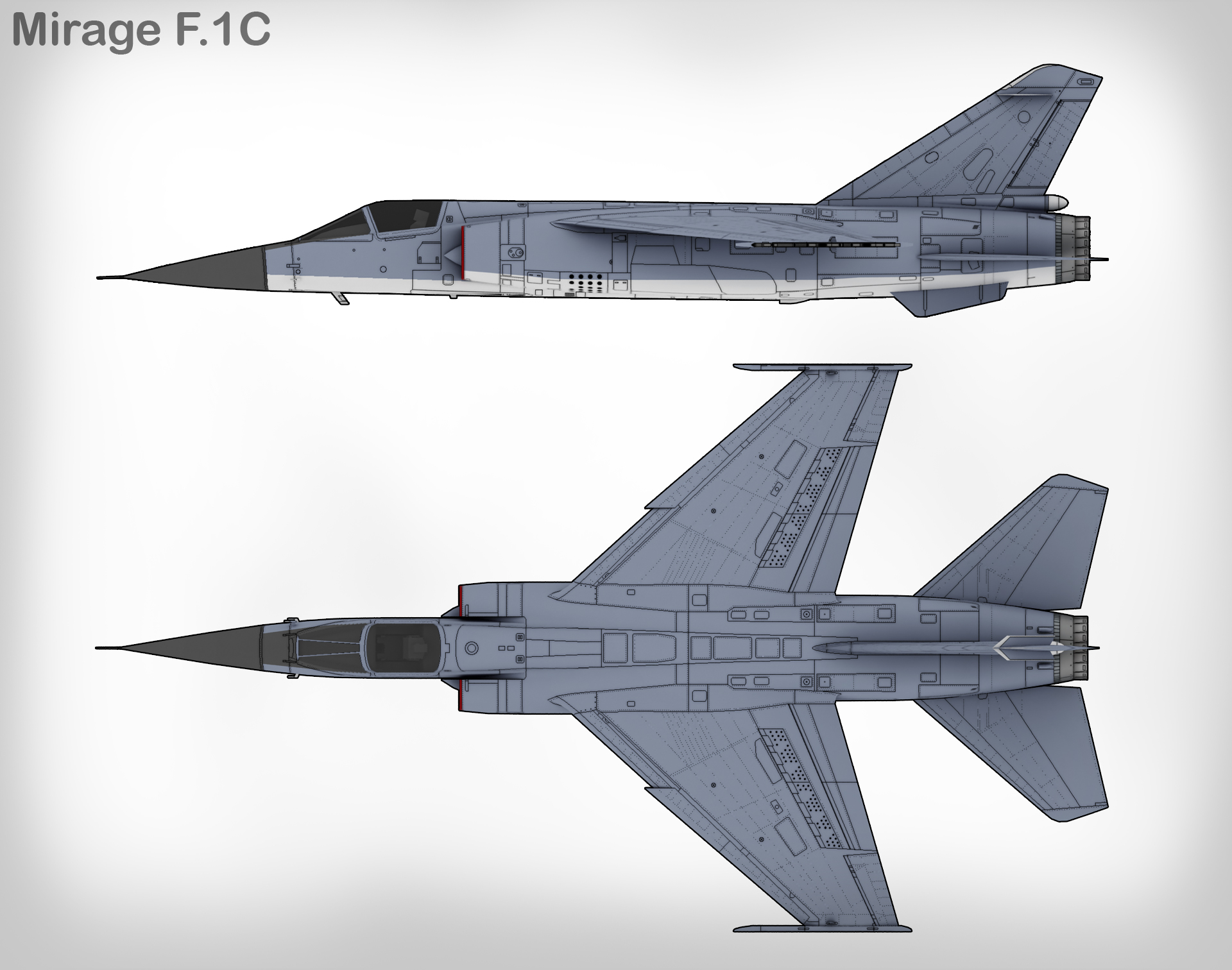 As stated above this is air superiority fighter but it is far from useless against ground targets.

It follows the Mirage 1C variant and adds more internal improvements; it can be identified by the stretched nose to accommodate a refueling probe. 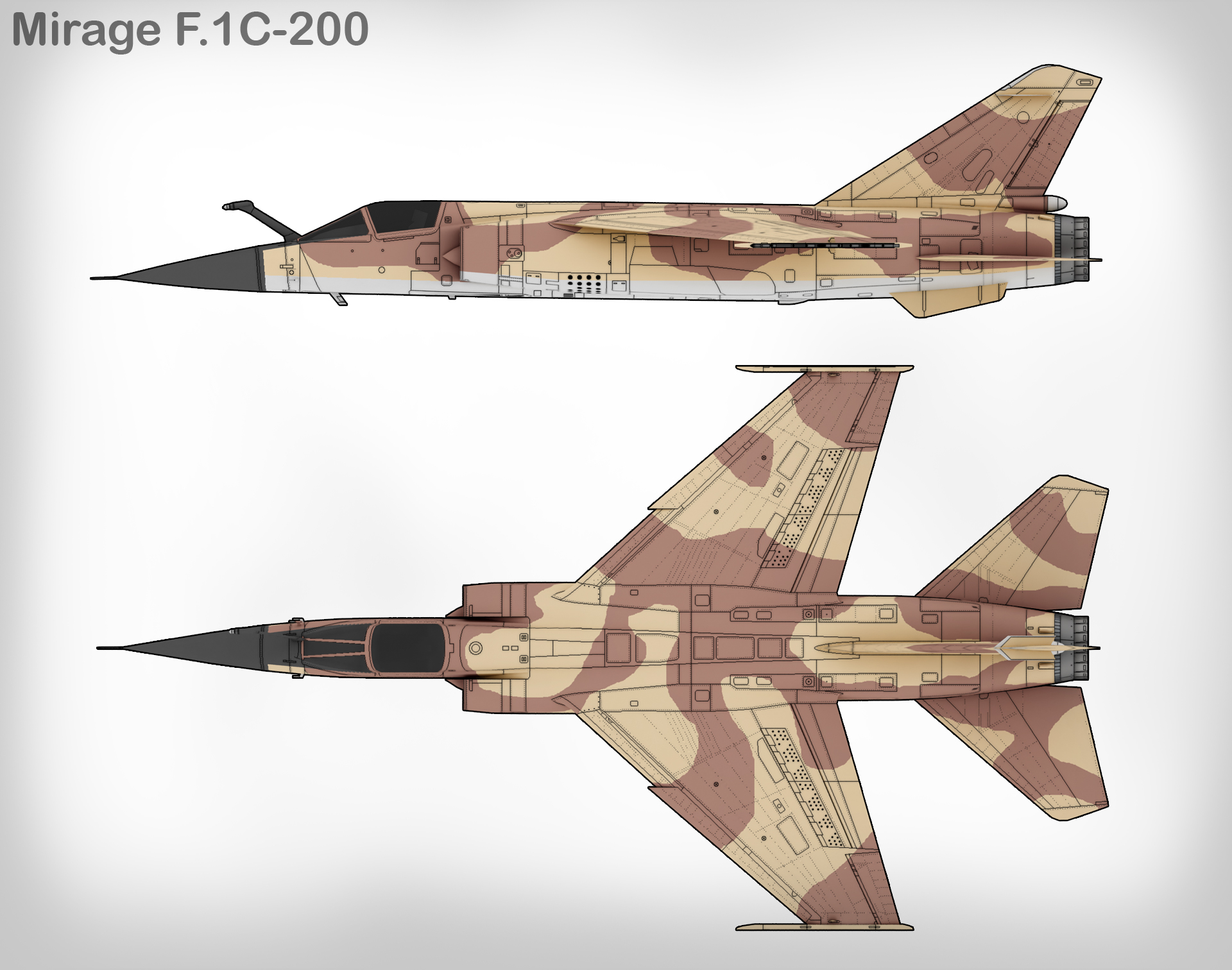 After the success of the C-200, this variant born this as reconnaissance role, it can be identified by the added cameras installed under the nose. 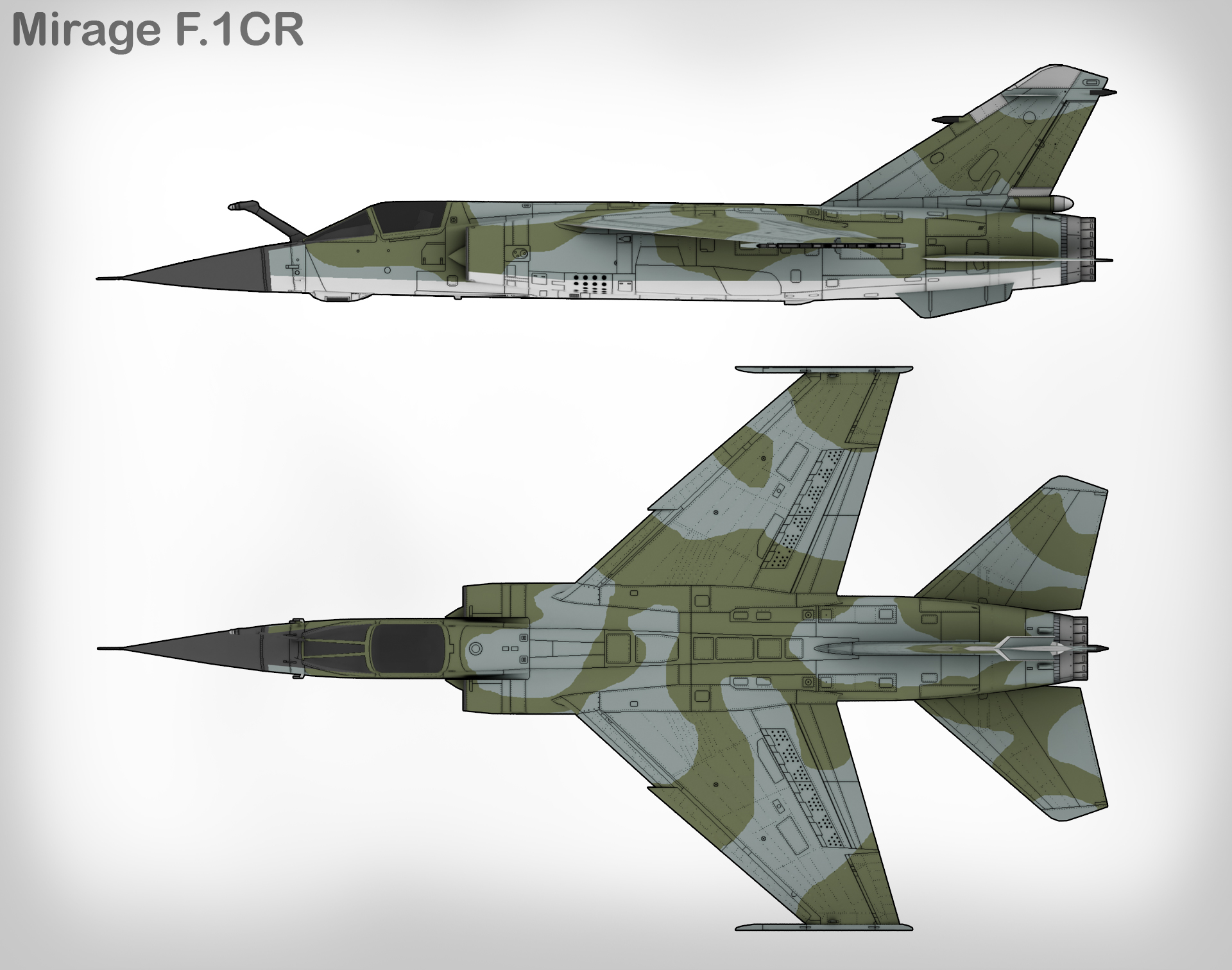 As stated above the Mirage F1CR is a reconnaissance variant and it is fitted with a new radar capable of terrain mapping, as a result it the boosted ground attack capabilities while retaining some capabilities of previous variants.

The Mirage F1CT evolves from the CR and replaces some avionics and cameras and fits instead a laser range finder under the nose. 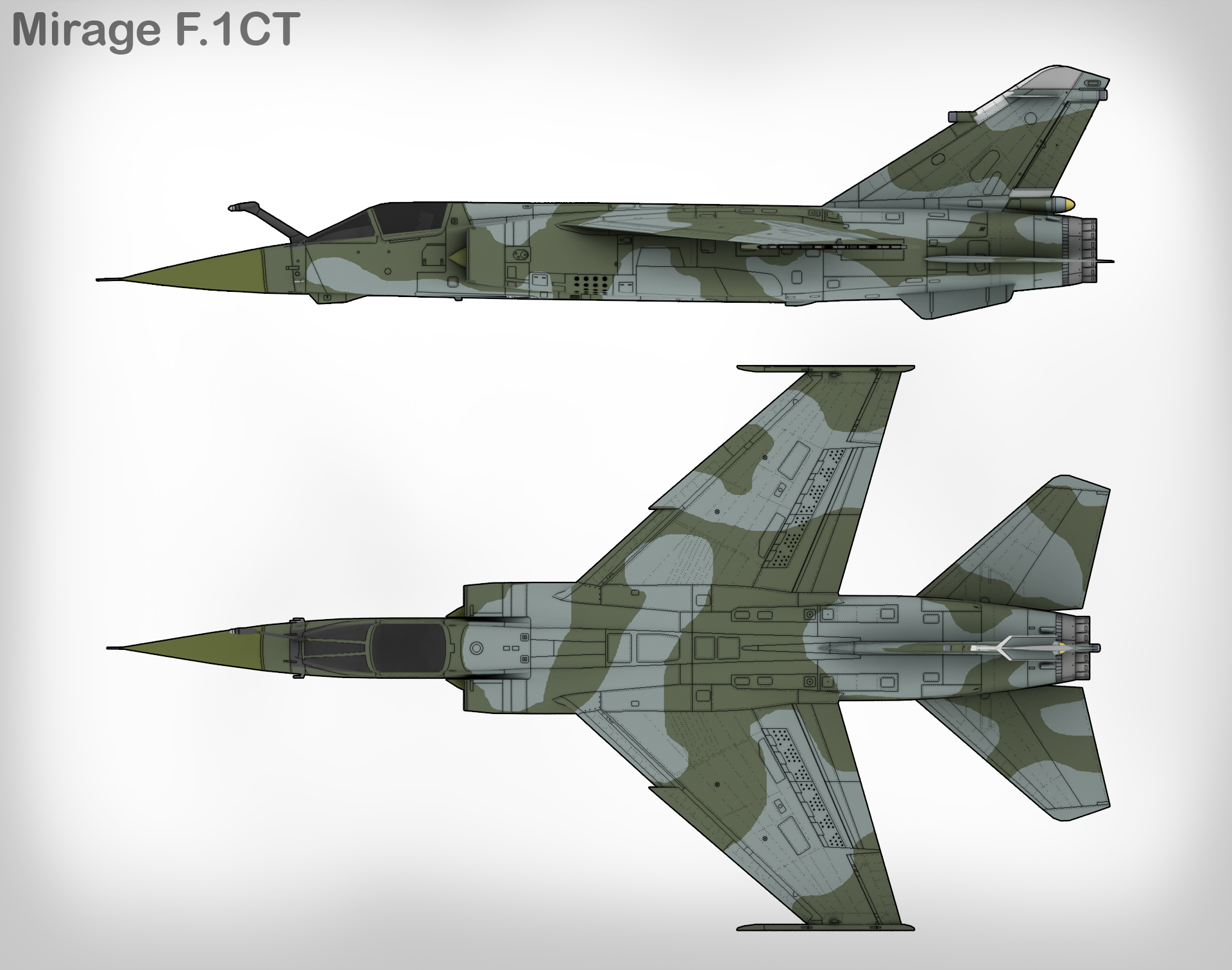 The CT version uses some elements that were applied to the CR to make a full-fledged ground attack variant, with improved avionics to fill that role with the capability to use laser guided weaponry.

Evolving from the C-200 the Mirage F1E remains very similar to its predecessor. 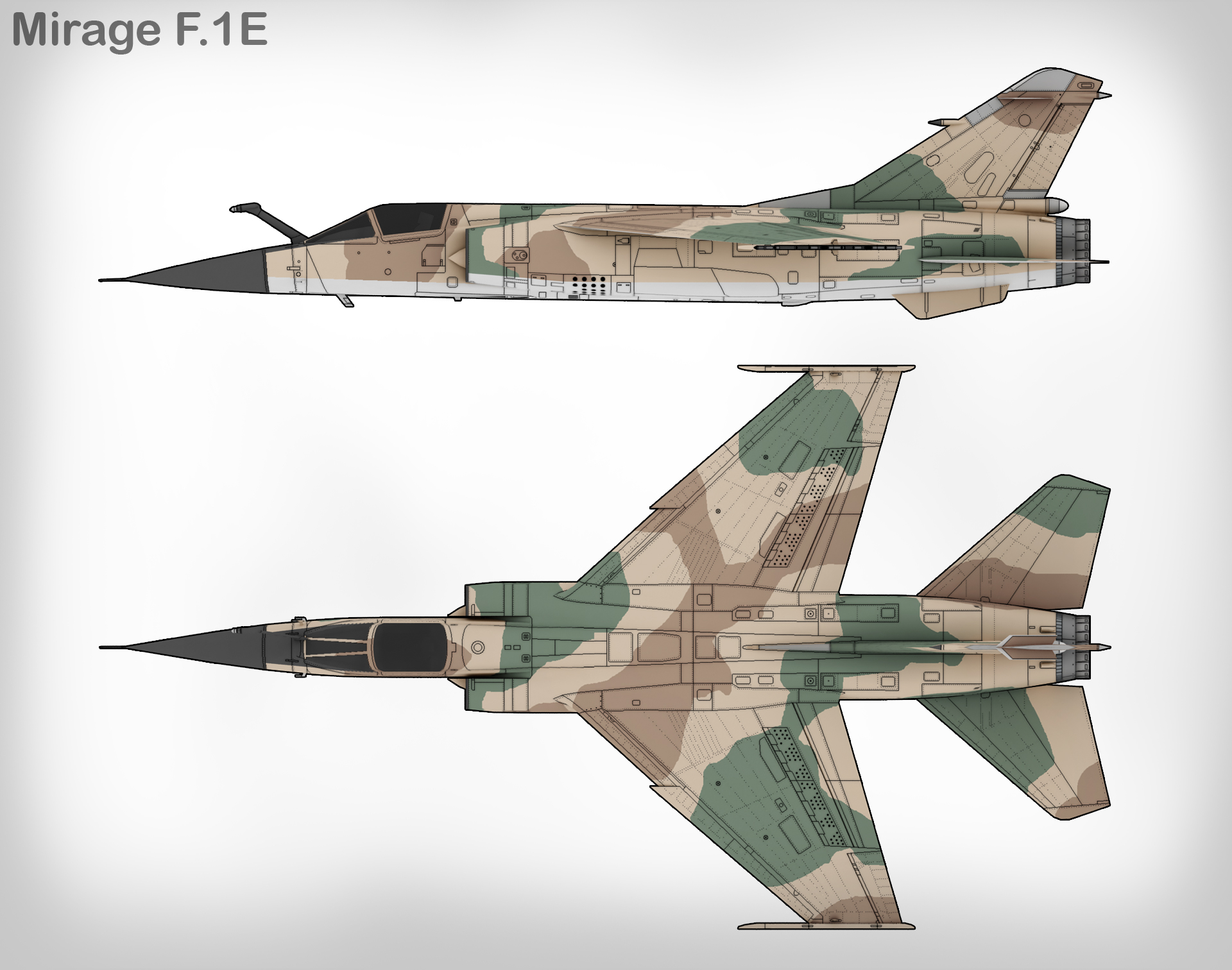 It is with the Mirage F1E that there is finally a element in this family that is a multirole aircraft, this is noteworthy because since this aircraft was initially design with that possibility in mind. As a result there was no need to make any drastic change in the airframe.
An important note is that this variant uses Sidewinders instead of Magic and Super 530 AAM missiles.

Following the evolution of the F1E, it has applied one last modernization to increase the service life of the aircraft, the Mirage F1M it is very hard to distinguish from other variants, but very often is fitted with chaff/flare dispenser just above the ventral fins, something that other units didn’t had as a built in package. 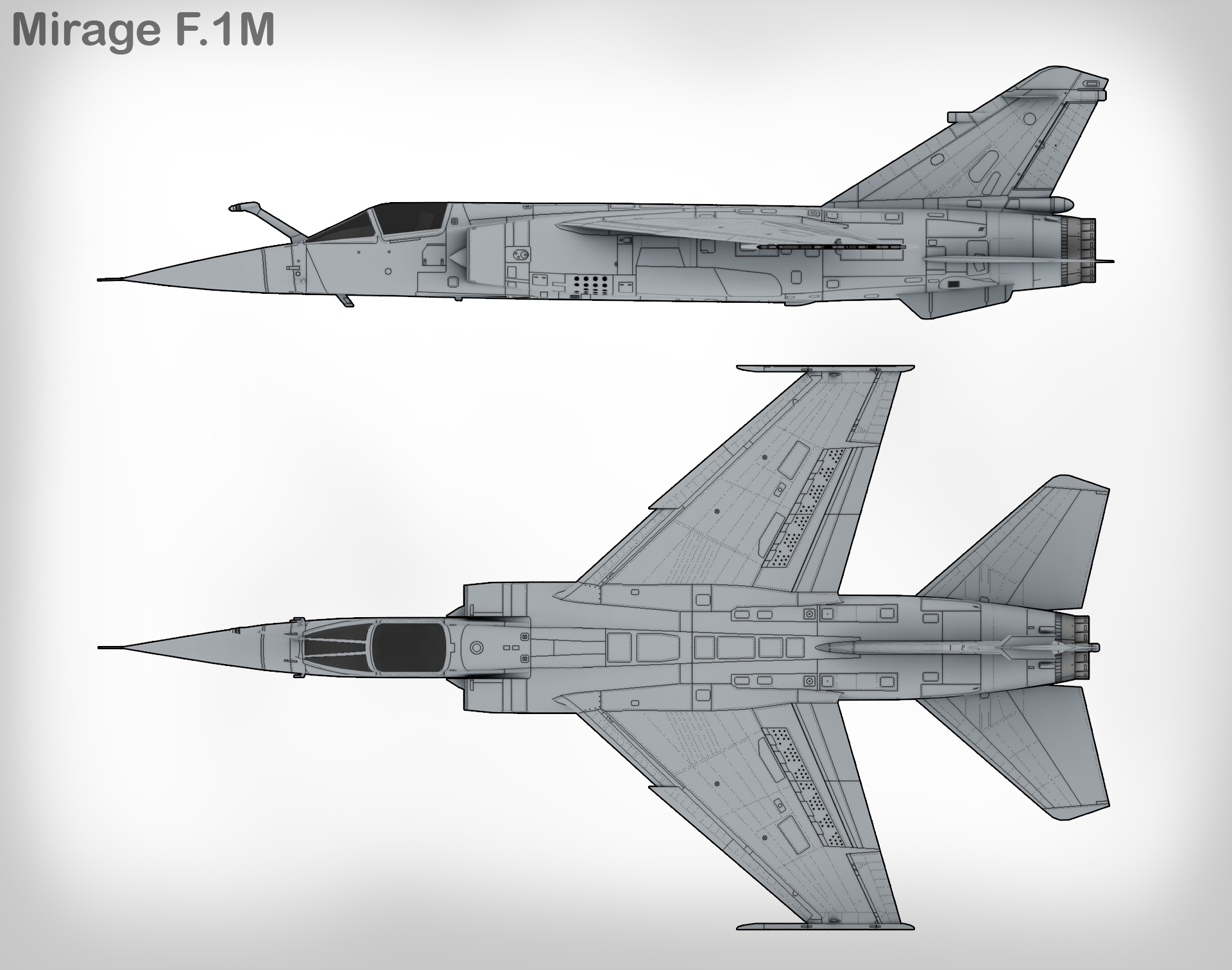 The Mirage F1M continues to be a multirole variant and the improved avionics and with the addition of built-in countermeasures, this makes it one of the best variants in this family.
This variant also uses sidewinder missiles.

The Mirage F1AZ diverge from the main branch, this is one of the easier variants to distinguish, it has a rangefinder and an antenna under the nose.
While all produced units use the normal engine, this variant in the game went ahead realized the idea of fitting a RD-33 engine (a mig-29’s engine).
It remains with the “mass produced” label because this variant really exist, however with the RD-33 engine it should be really considered as “concept” 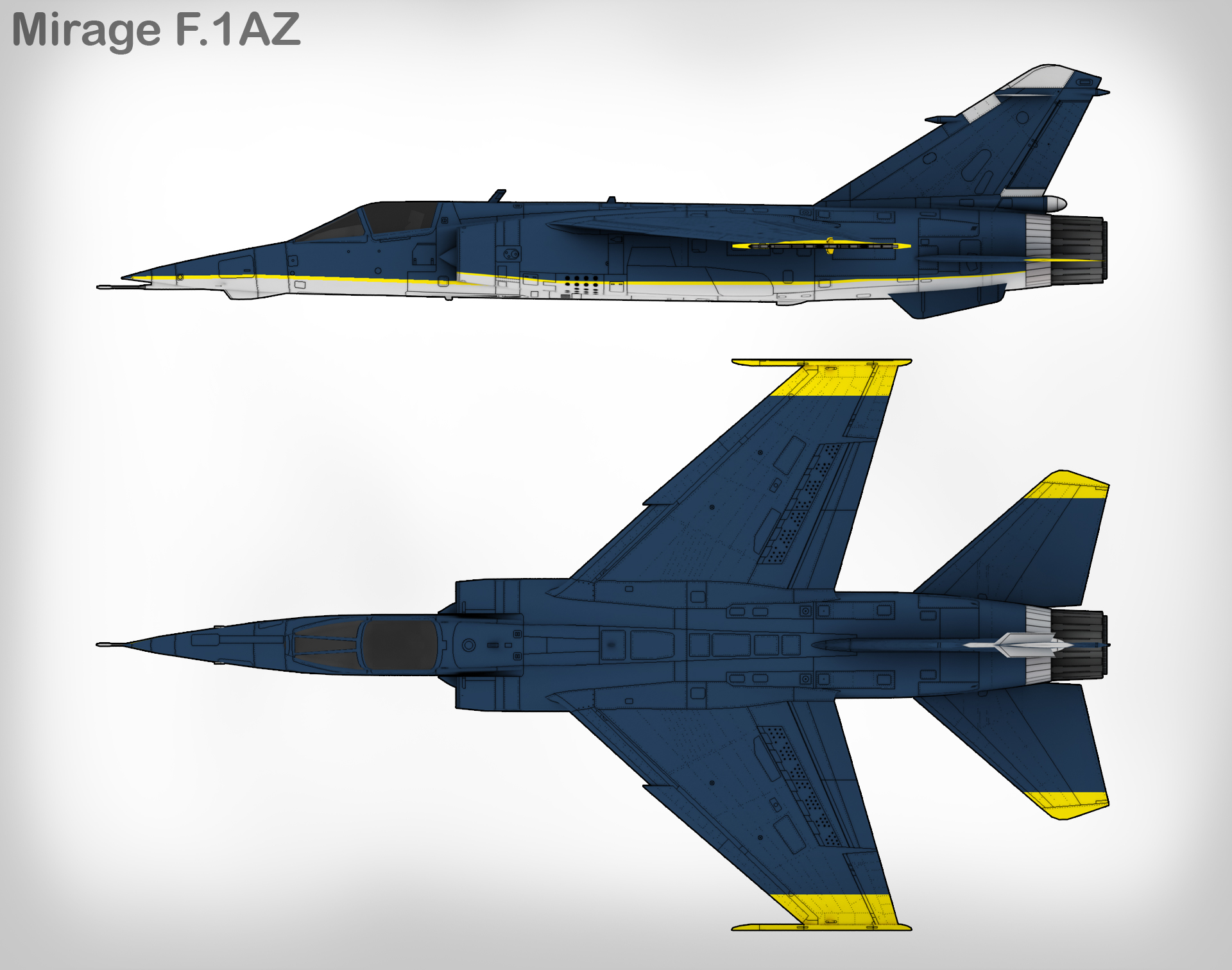 This variant is a ground attack variant, similar to the CT variant, but it uses different technologies. The Mirage F1AZ is very good attack aircraft but it has much weaker capabilities as fighter than the CT.

The Mirage F1_M53 is a variant completely unrelated to the M variant, it born from the original C to become a evolved variant capable o carrier operations.
It has slightly stretched fuselage and refueling probe is stored inside of the right side of the nose. 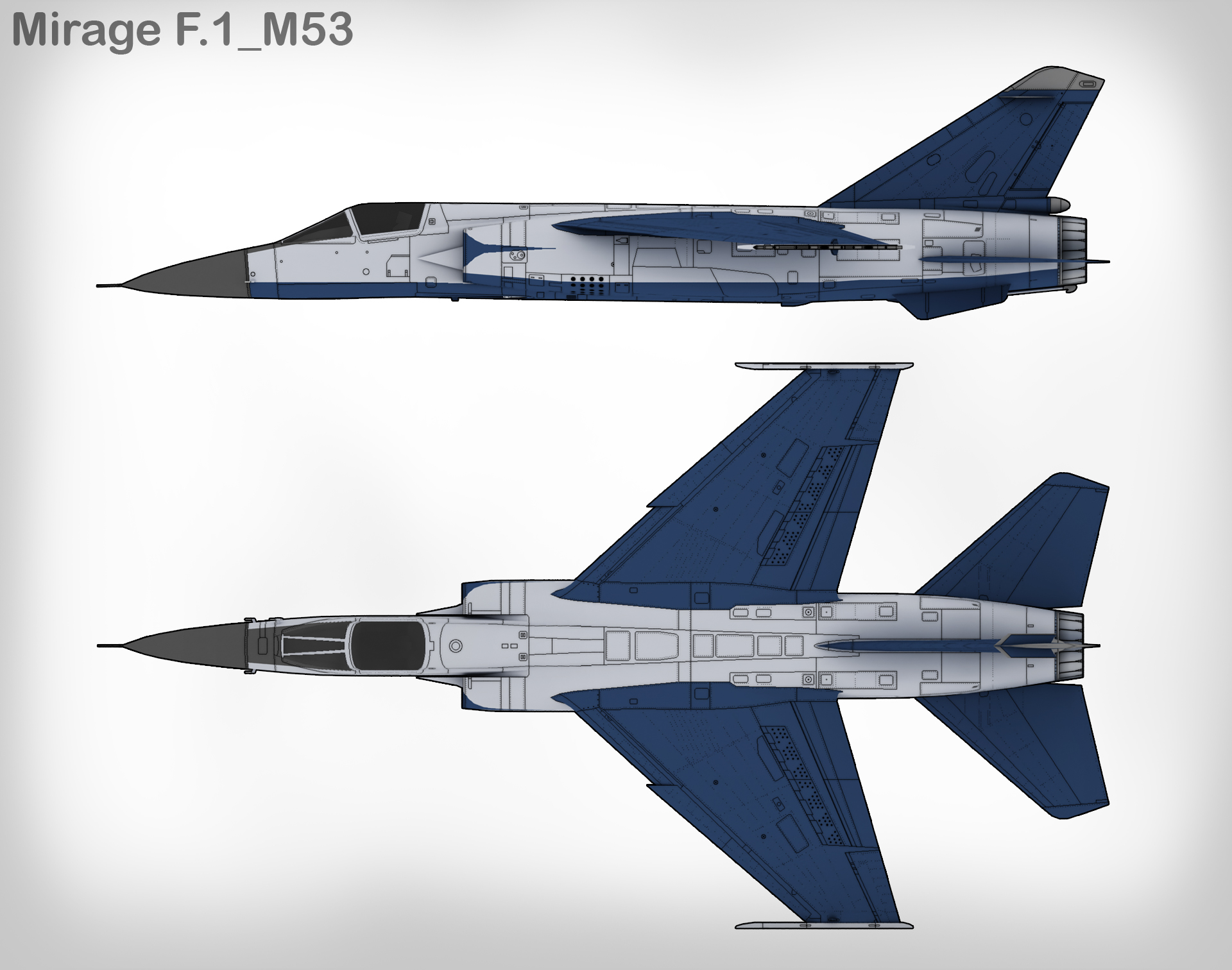 The Mirage F1 M53 has been fitted with all the avionics in order to be the multirole aircraft. It also has a new engine capable of higher performance with little cost in additional weight.

The mirage MF2000 another branch diverging from the main family, this one evolves from the E variant to become what some considerer as the “Super Mirage F1”.
Although visually there’s no significant change besides the laser designator below the nose. 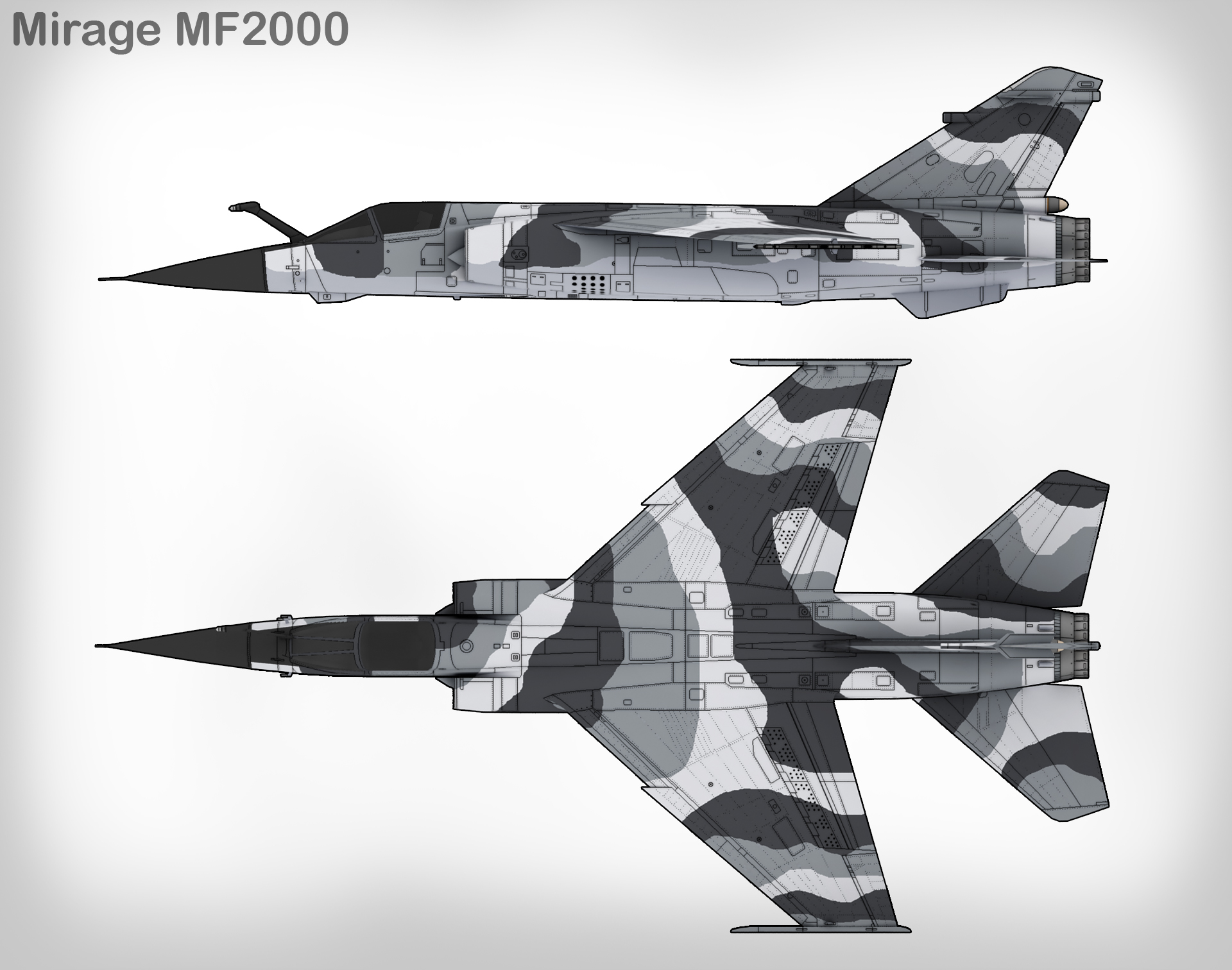 The MF2000 is a multi role aircraft; this variant uses the latest avionics with combination of some of the Mirage 2000. While derived is an older design, these changes make it a viable fighter against early 4th generation fighters.

And this is all for the Mirage F1 family, on contrary to some families, this one is more sober with no exotic variants in it. The downside is the variants are very similar to each other with only a few having a really noticeable feature. But regarding to that, visual variety will be compensated with the aircraft of the next report.

Thanks for another good report :)

"But regarding to that, visual variety will be compensated with the aircraft of the next report."

Most likely the F-22, from the stuff I have been getting >__> descriptions nearly killed me

The F-35 also have an interesting variety of units.
But it will be the F-22, in variants this aircraft is the king.

So, uh, are you going to throw almost every single ATF prototypes/drawings that related to YF-22?

^
Since there are quite alot. Not to mention the several extras, like the X-44..

That'll be an interesting report to read, given the various concepts made during the competition and other proposed programs.

It's also good seeing the F1, this is one my favorites in the Mirage family.

I just realized I can make Sprog's Kaizen now :P

I love seeing older aircraft being implemented (still hoping for my personal favorite), keep up the good work!

At last a french plane ! Can't wait for the Rafale and Super Etendard ! :D