Control and edit any mission at any time, add anything that you want, just don’t use it for cheating…

This report contains the changes of the 0.2250 update.

The Mission editor announced a while back is almost completed and in this update it will featured a working preview.
Anyone interest in making original missions may like to try this out.

This is how you can access it:
Press Shift+E during play time and you will immediately enter in edit mode 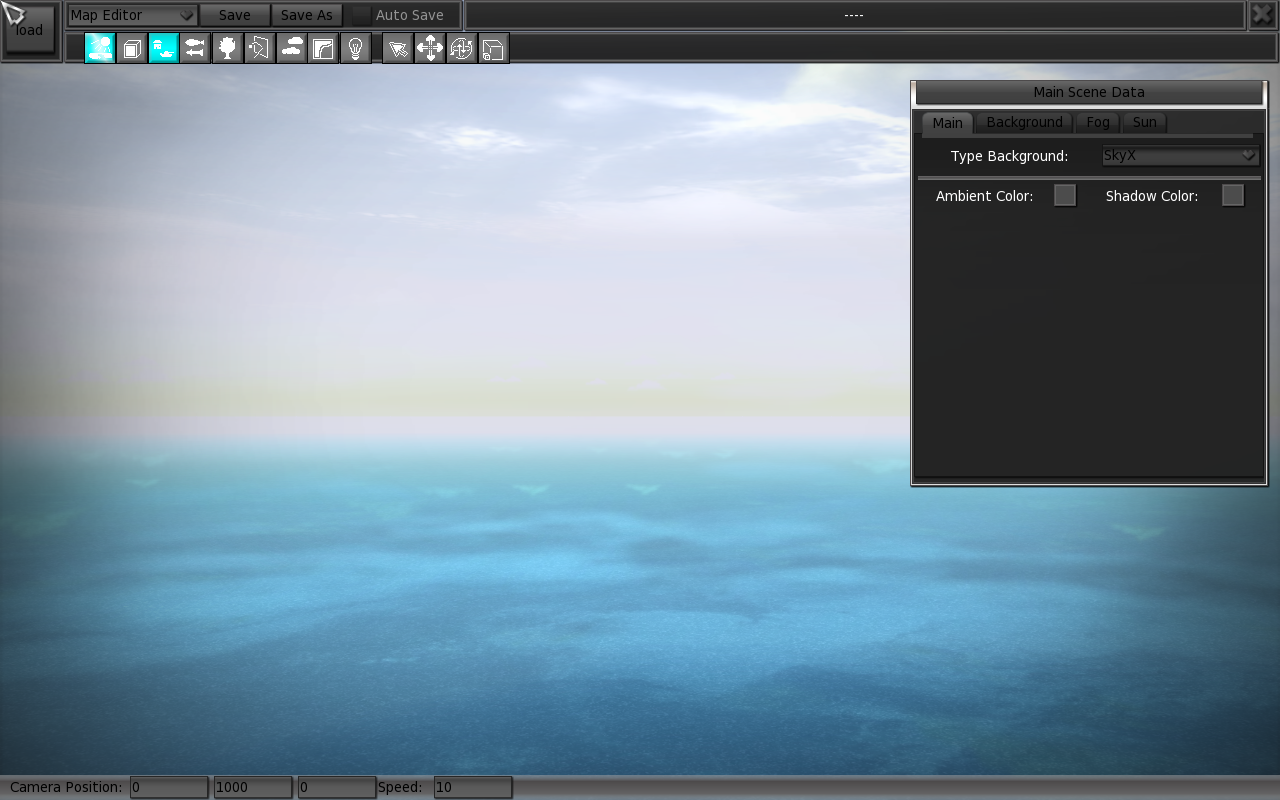 After entering in the edit mode, change it to the mission editor mode.
Note, the mission editor in this version is a preview, not all functions are available and it is not yet possible to make a mission from scratch, but you can add and edit missions events at will.

Before showing an event as an example, let’s explain the terminology:
Missions- These are the player missions, the accomplishment of the main mission will result in clearing the level, whoever sub missions can be added, they can be used as separate phases of the main mission or be used as independent operations.

Actions- there are the controllers that change the level, they range can be from spawning a unit, change the music or triggering the death of a unit

Triggers- these are the controllers that check the game state forking from certain conditions, when those conditions are true, they call any specified action (They can be from checking the player position or checking the number of targets remaining in the level);

Conditions- is a controller composed of group of triggers, only when all contained triggers are true this controller will call any specified action;

Variables-stores numeric values, they can be used for controlling branching patch to be used for karma levels;

Pointers-are the static hud points that can be used to help guiding the player in the missions;

Npc Missions- these are the controllers that define the goals for AI players, by default all AI have the mission to kill all enemies, but it can range from guarding a zone to escape to a designated place;

Dialog-these are the controllers for the communications dialogs that appear in-game;

Fixed Events-these are quick triggers that can call any spiffed action in a specific event they can be from the player clearing the mission to crashing to the ground;

Just to try it out, let’s add an event that makes backup arrive if the player HP goes below certain level. 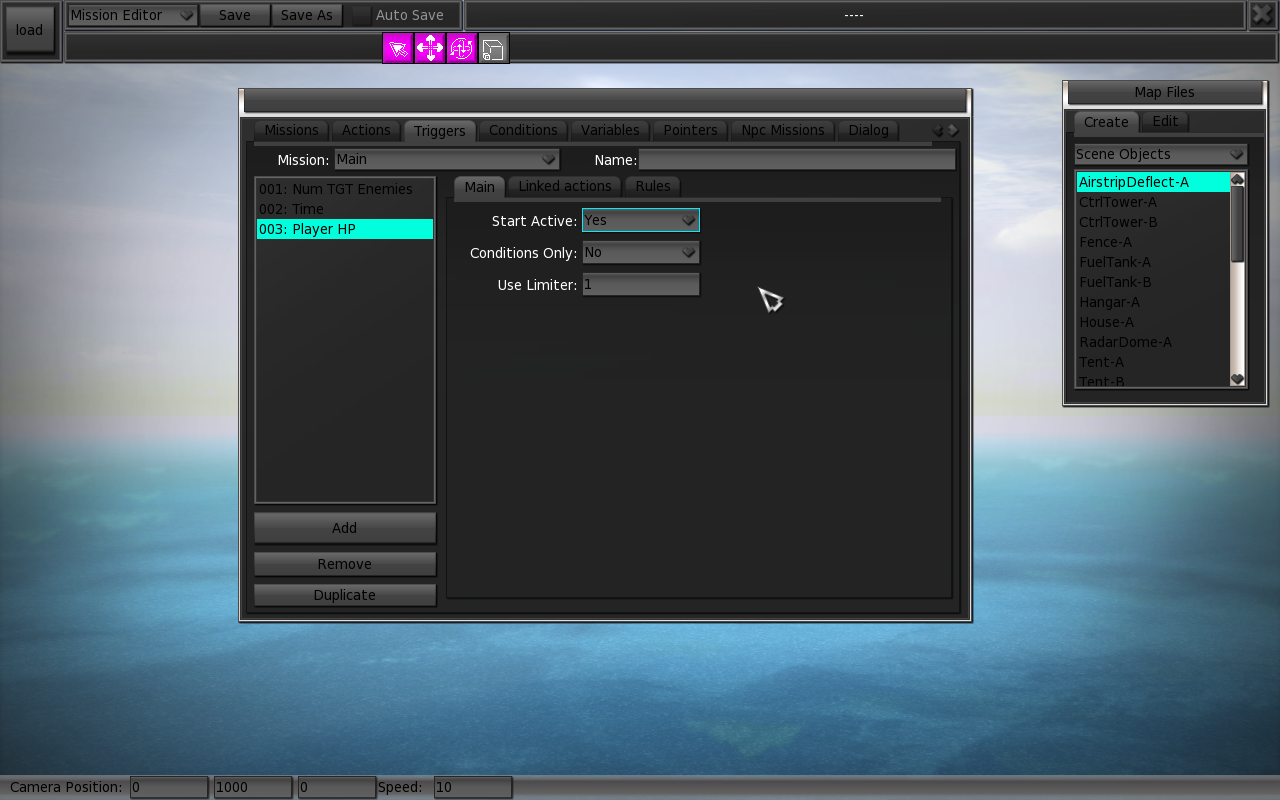 First we create the trigger and setup the desired parameters. It is important to make it active.
Conditions Only, will make this trigger only usable when checked as part of a condition group, in this case we don’t need that.
Use Limiter, defines how many times this trigger can become true, with the “1” value it will call only one time for backup and then it will be automatically turned off.
If this trigger is part of a condition, then that condition can never be true while a trigger element is disabled. 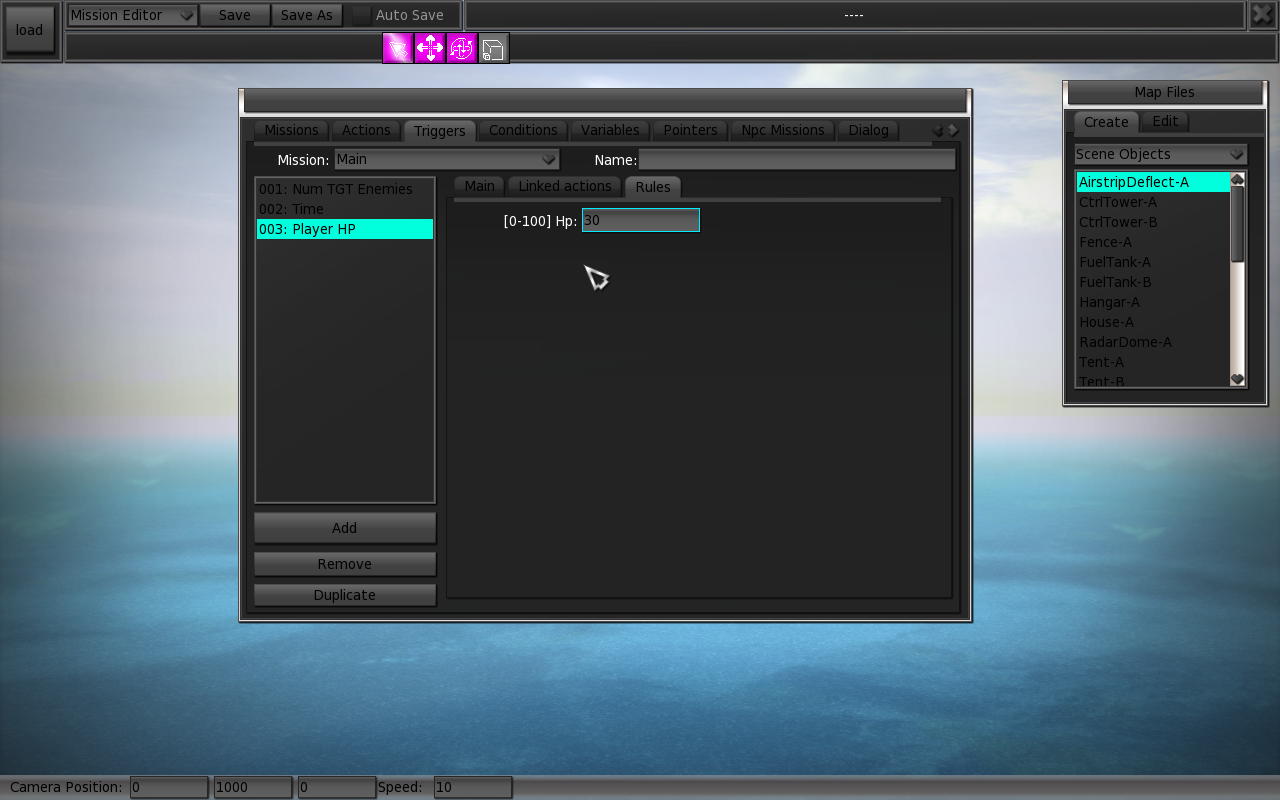 Then define the intended HP value. For this example, this trigger will be active when the payer HP reaches bellow 30%. 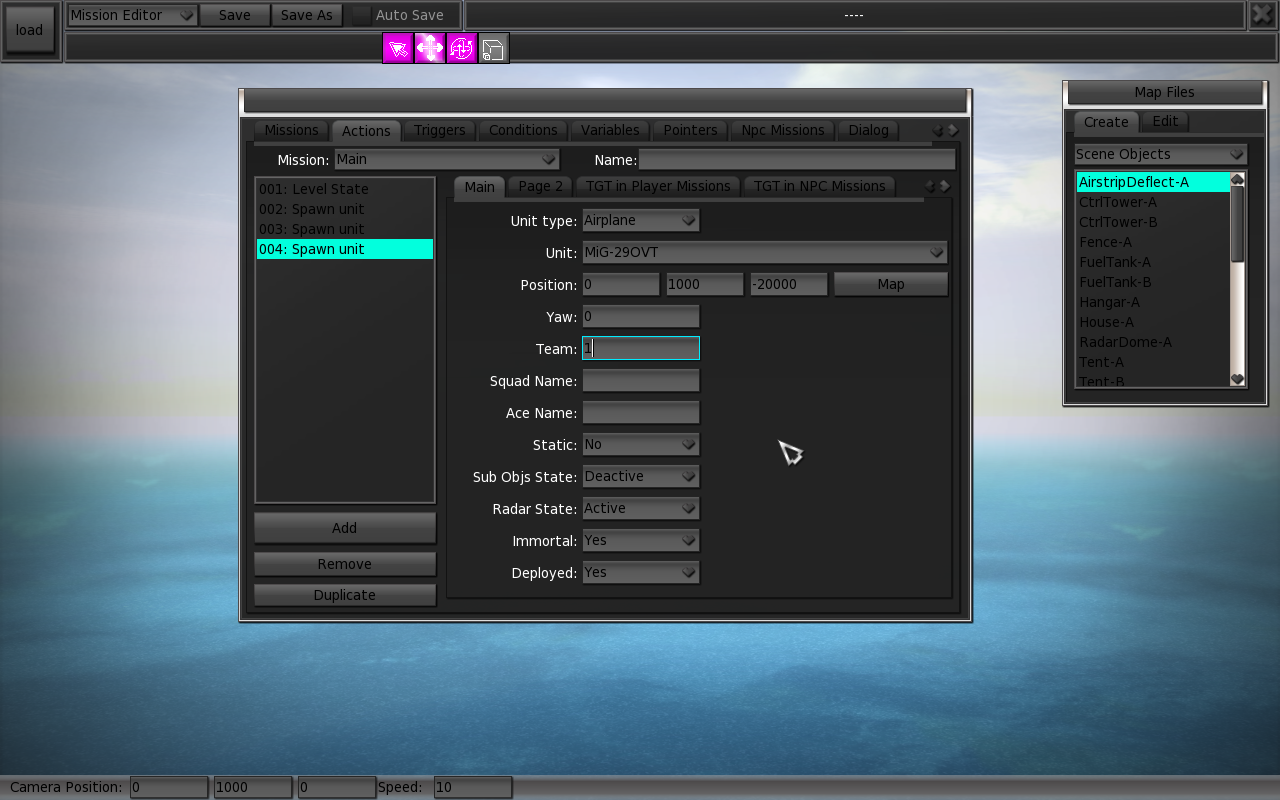 The next step is to create the action the spawns the unit. As we want a backup unit, we set as team 1, as usually this is the player’s team.
Whoever, the player can be part of any team, even neutral and can change at any point during mission. 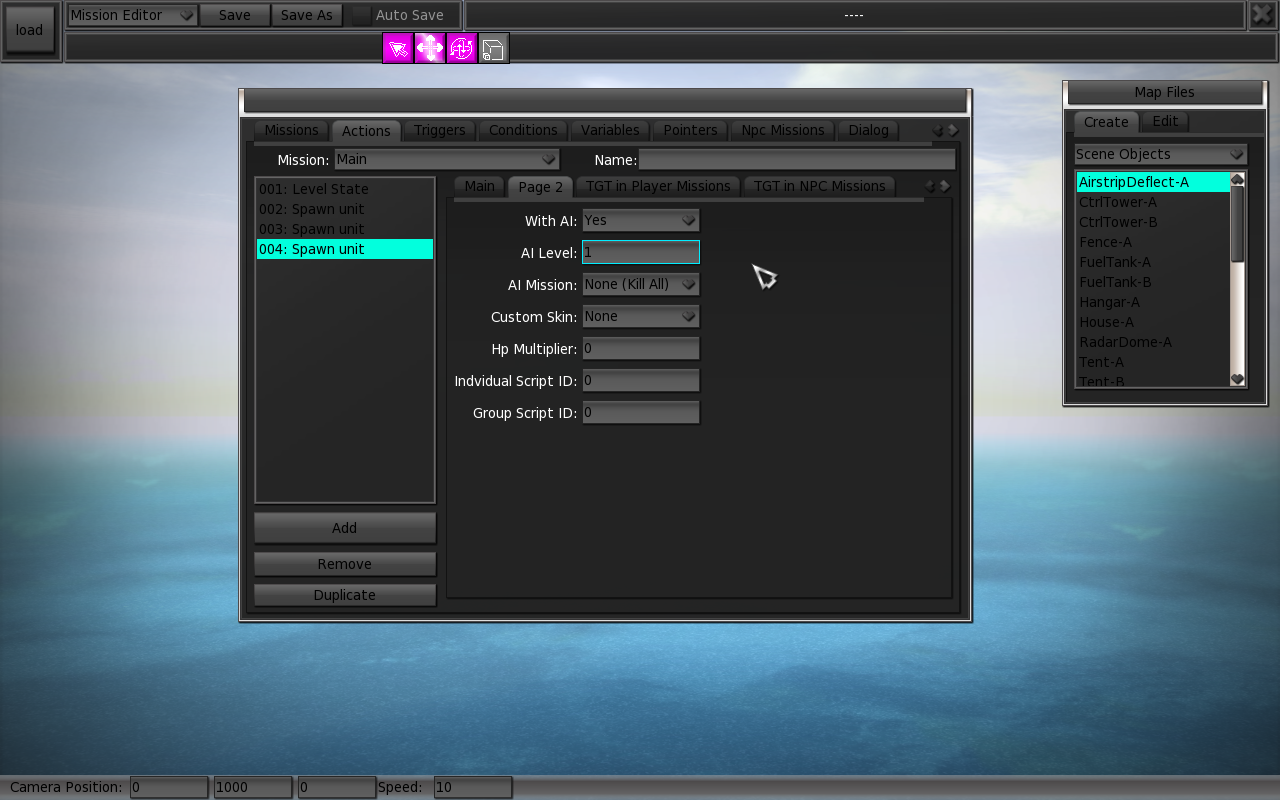 But we must not forget to set the AI active in the unit. 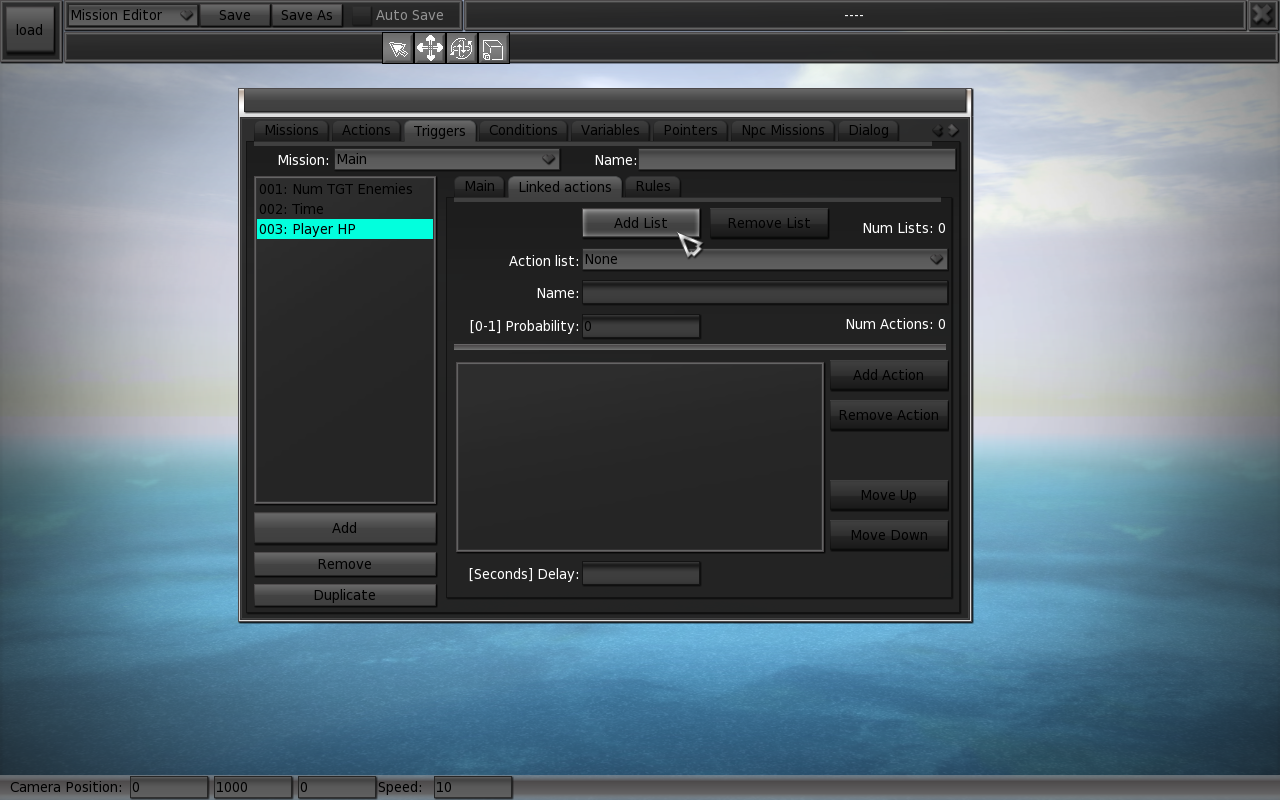 The final step is to link the action to the trigger. To do that, we need to create a list. A list is a set of actions that can be called.
A trigger can have a multiple action lists, each with their own call probability, but only one will be called.
This is useful to make controlled “random” events.
(If there is only one list and it as 0% probability, the game will assume that the maker forgot to set that value and that list will have 100% probability) 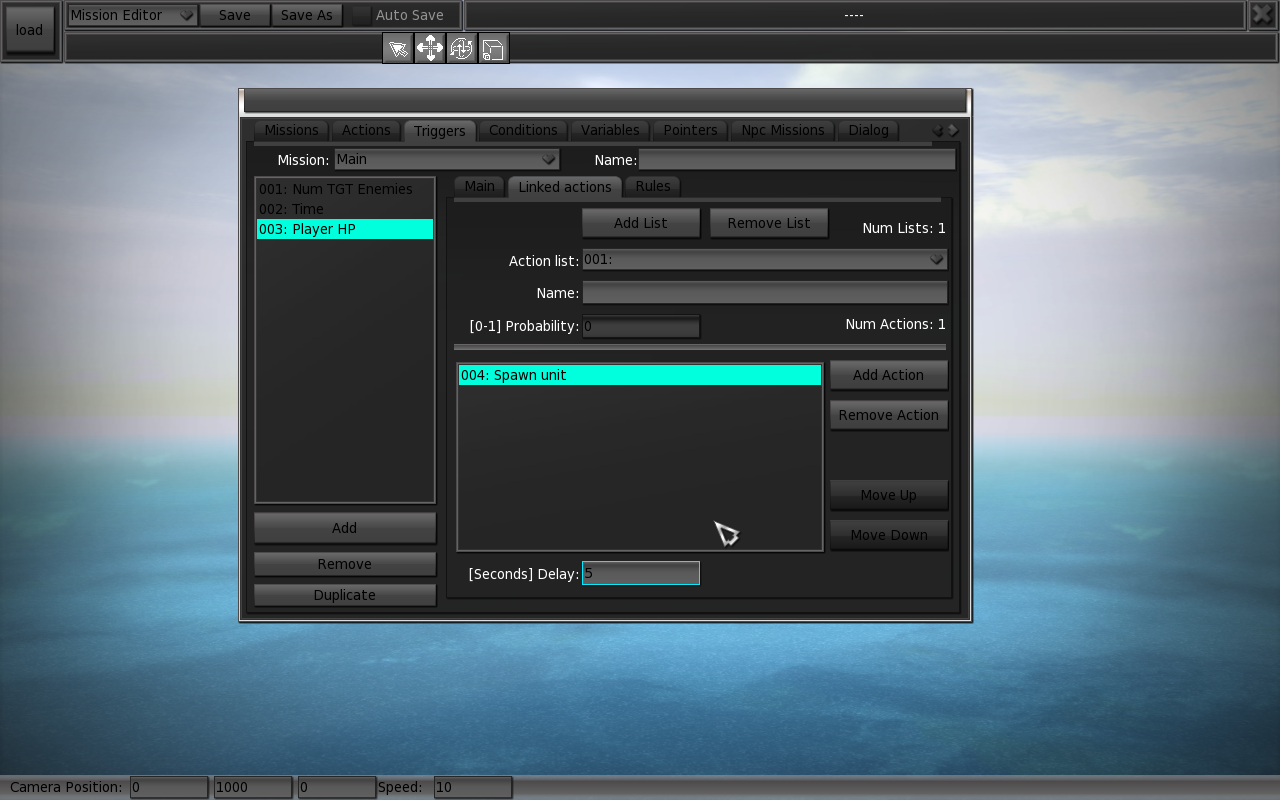 And finally link the action to that list. (Naming triggers, actions or other controllers will help you later when you need to find the right one in a huge list of controllers)
After this you can turn off the editor and play. If the condition is met, the event will be carried out.

You can also play and edit with the currently available missions by changing the existing events to test different outcomes.

At the moment, the game already offers a wide selection of actions and triggers, but new ideas are always welcome to expand this selection even further.
The purpose of this update is for the player to get used to the mission editor, because it will be fully functional and it will be possible create completely new missions in the next update.
So look forward to that.

Enjoy the editor and again feedback is much appreciated especially if anyone has ideas to add more actions or triggers.
When the editor is completed, it will be accompanied wit some tutorials, but in case someone as any question, feel free to ask.

There’s a lot more to do with the editor in this version, but that will be left to the player to find out. As for the rest of the update, as the editor at the moment is the most important priority, there isn’t much room to add anything else, but in this update there still are some extras.
First, playable aircrafts:

The F-15B, one of the most basic variants for the F-15 family, it is a two seater, trainer version. 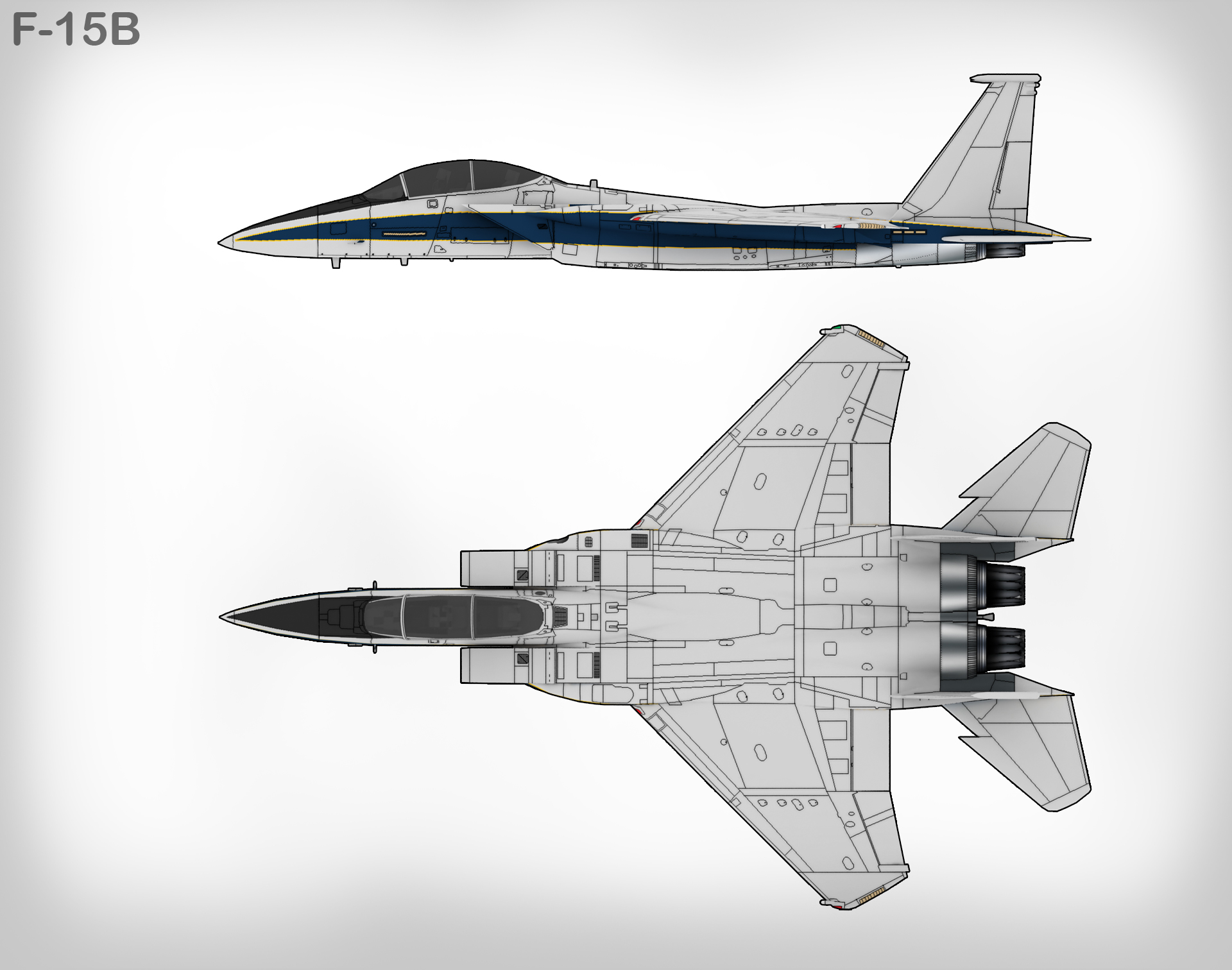 The F-15B is the trainer version of the F-15A and while it is a trainer is a fully combat capable variant.

Similarly it was added the F-15D, the trainer variant of the F-15C 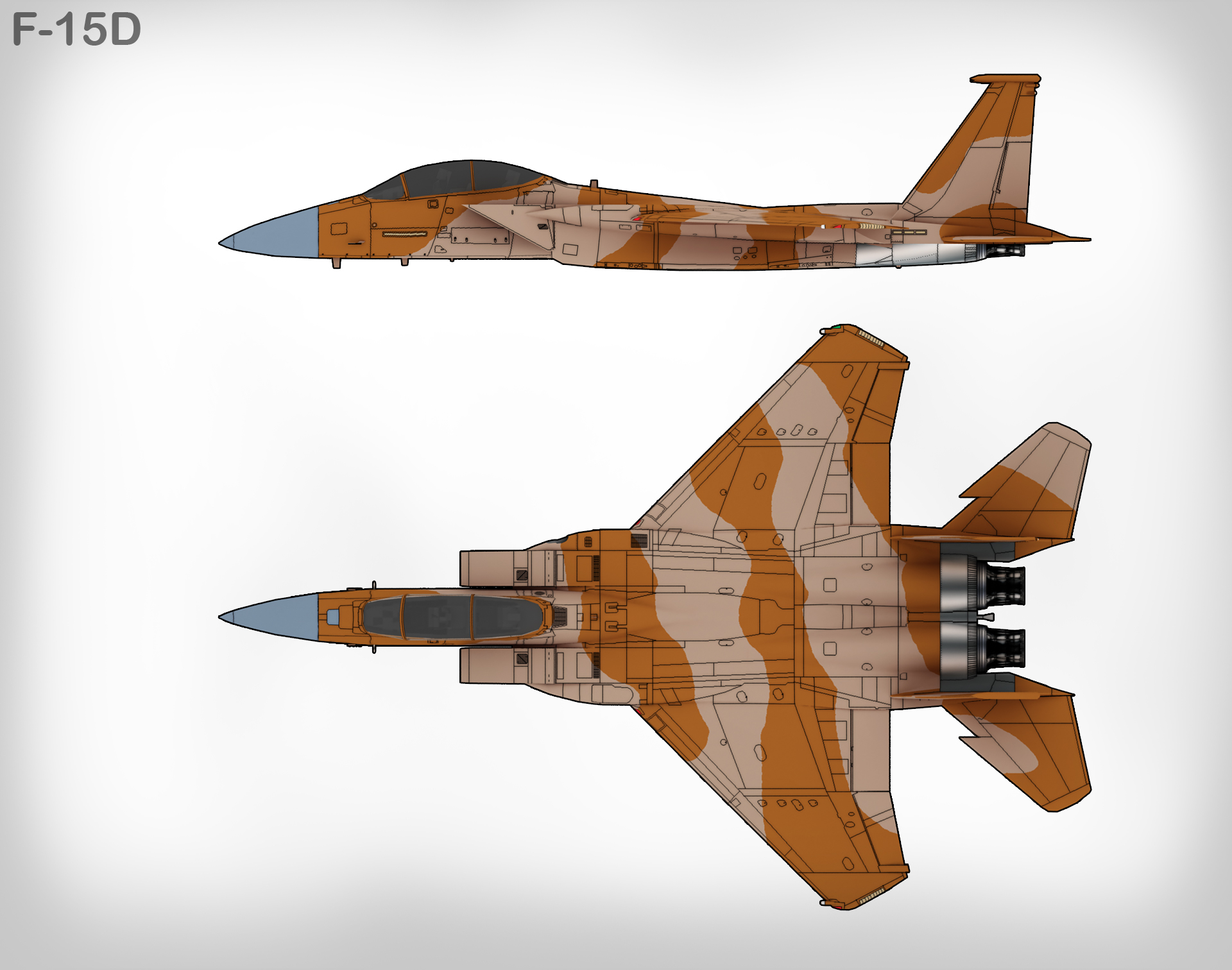 The F-15D has better avionic and performance compared to the F-15B.

A similar unit is the Su-27UB, the two seater/trainer variant of the Su-27 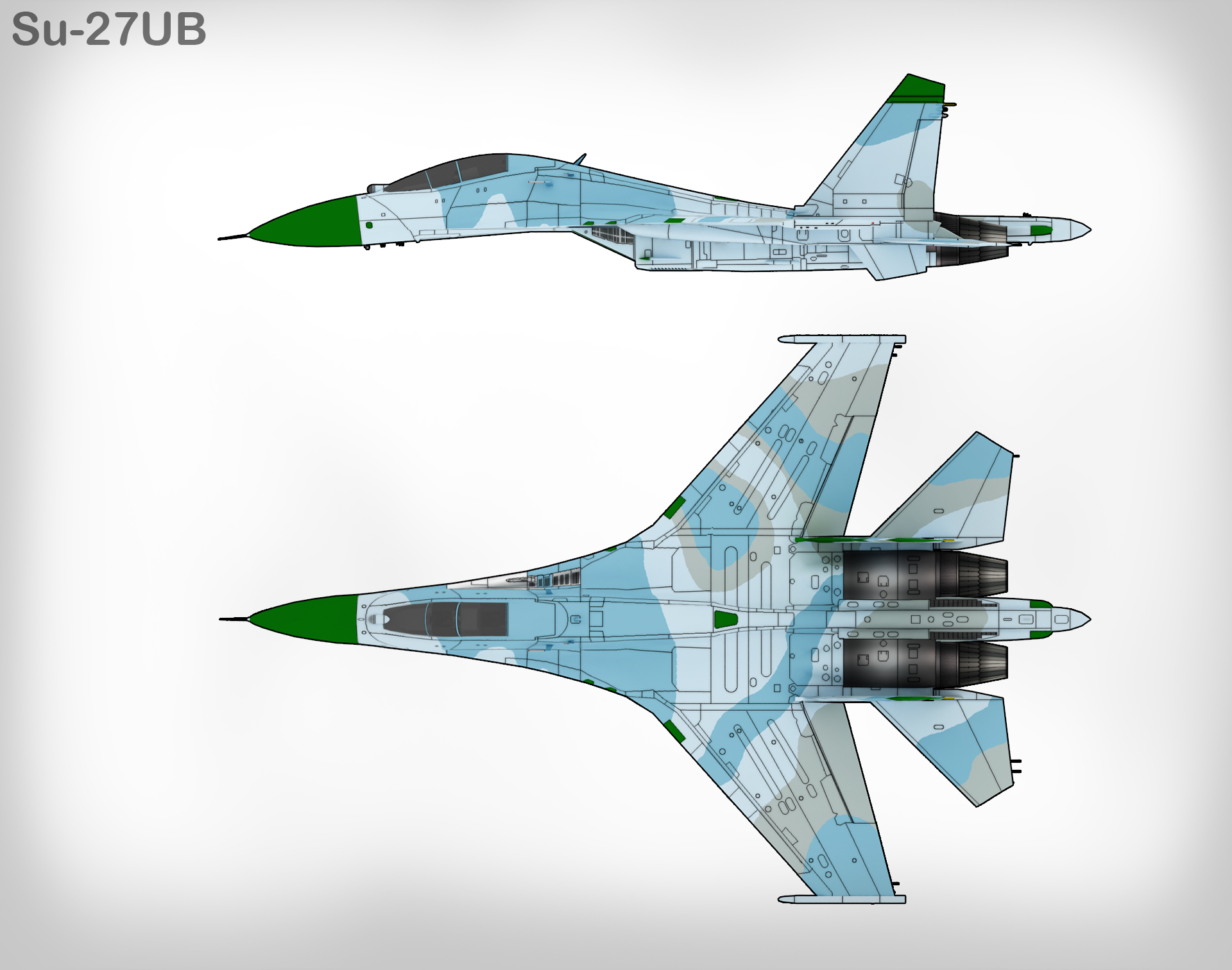 The Su-27UB is however a much lower performance than the standard Su-27S.

It was also added the Jaguar Gr1A.
This aircraft was shown a while back but it is one of those that units that haven’t been added yet. 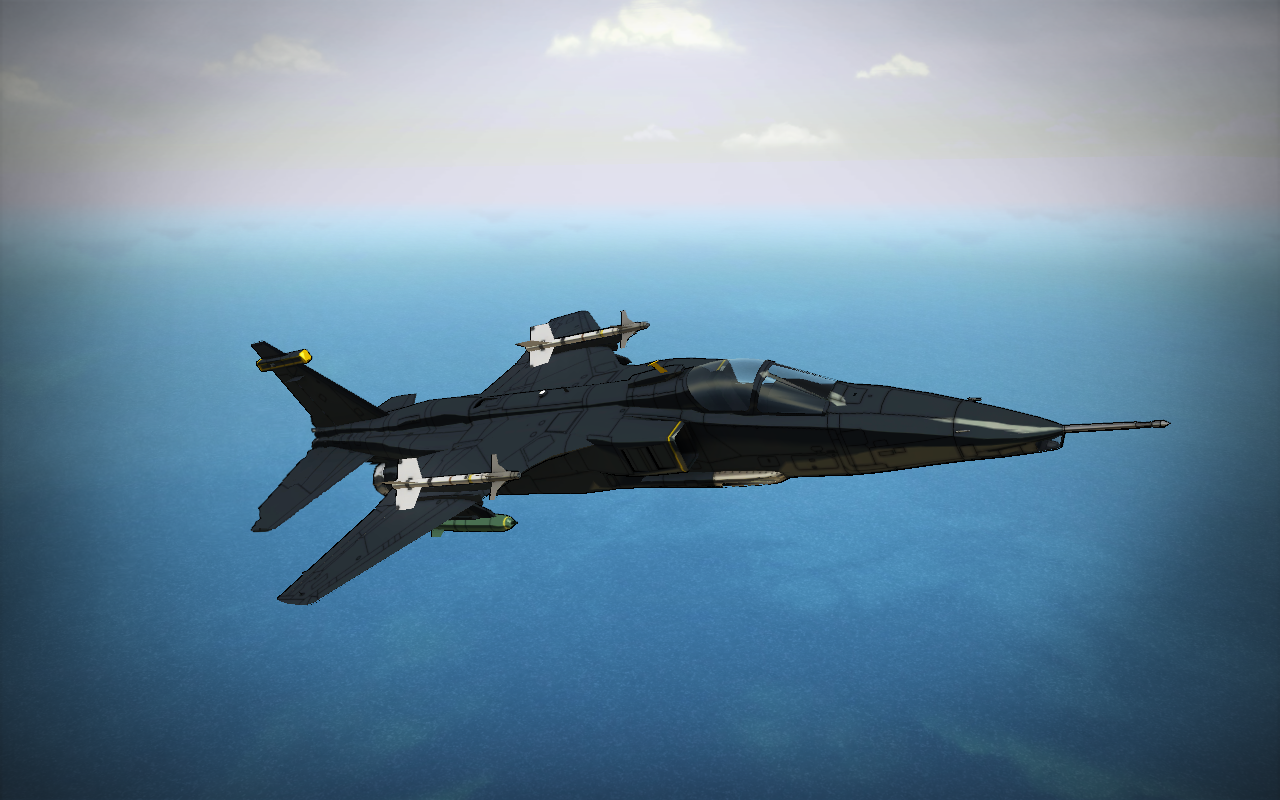 The jaguar Gr1A It a simple performance variant.

And finally the new campaign has started the production, this will be a truly story based campaign.
Also, while the whole campaign and related content will be released all of it in a single update, as an extra it added in this update a new map that it will used in that campaign. 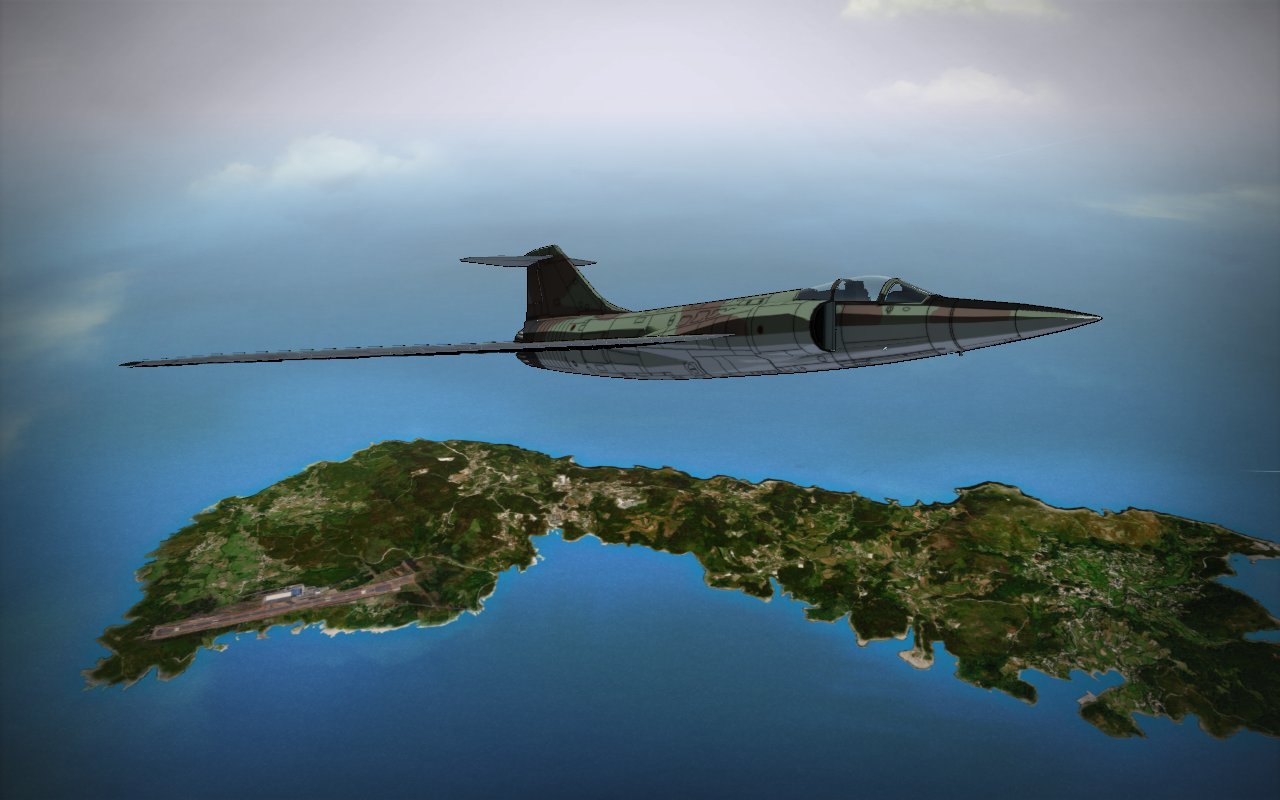 The map still needs some tweaks and the ground objects to be added, but this will give more variety to the existing maps available.

Can't wait to see the campaign along with the things people will be doing with the mission editor!

This might sounds a bit redundant, but is there's any possibility to make the mission editor as a standalone program? I know some would prefer it to be standalone.

I would like the Mission and Map editor as standalone too.

Okey, I'll keep that in mind. Only out of curiosity, why would you prefer as a standalone?

More convenient to use in most cases, IMO. Takes less memory, better co-usage with other programs (like copy-pasting briefing text from Word, adding dialogue samples with sound editor open, scripting in external editor, etc). Standard Windows interface is more comfortable to work in for some people.

Besides, by making it standalone it obviously would prevent 'cheating' from happening....

if you know what I mean

Well John_Silver and V3KTT just pretty much summed it up for me.

Thanks, I’ll see what I can do. But accessing the editor mode during gameplay is an option that will only be available while it is in alpha. In the final version, it will only be possible to go to the editor by a specific main menu option.

Is the map editor still in production?

I'm drooling over that screen of teh GR-1A. Beautiful modelling and texture work Time.

That would take a while though.