What only lacks is a warning message saying “Warning, Ion cannon detected!”

This report contains the changes of the 0.2190 update.

Just for contextualizing, these last updates hare been more compact because the mission editor currently is being developed in parallel production.
Being that said, let’s start off with the main topic:

While the mission editor is not yet completed, the skirmish is the game mode that has being given more attention at the moment.
In each update is constantly being improved and refined, although it already offers everything that need to offer there are still a handful of great ideas lurking around in the forum, both as game modes and mutators, so there is still plenty to improve/add in this game mode.

This continuing the expansion of the flexibility of the mutators, it has been added the possibility to add additional units.
Exploring this newly added possibility, what could be created as a mutator is something that adds units that disrupt or limit the formal flow of battle.

Several ideas came to mind, but ultimately was chosen the creation of this unit: 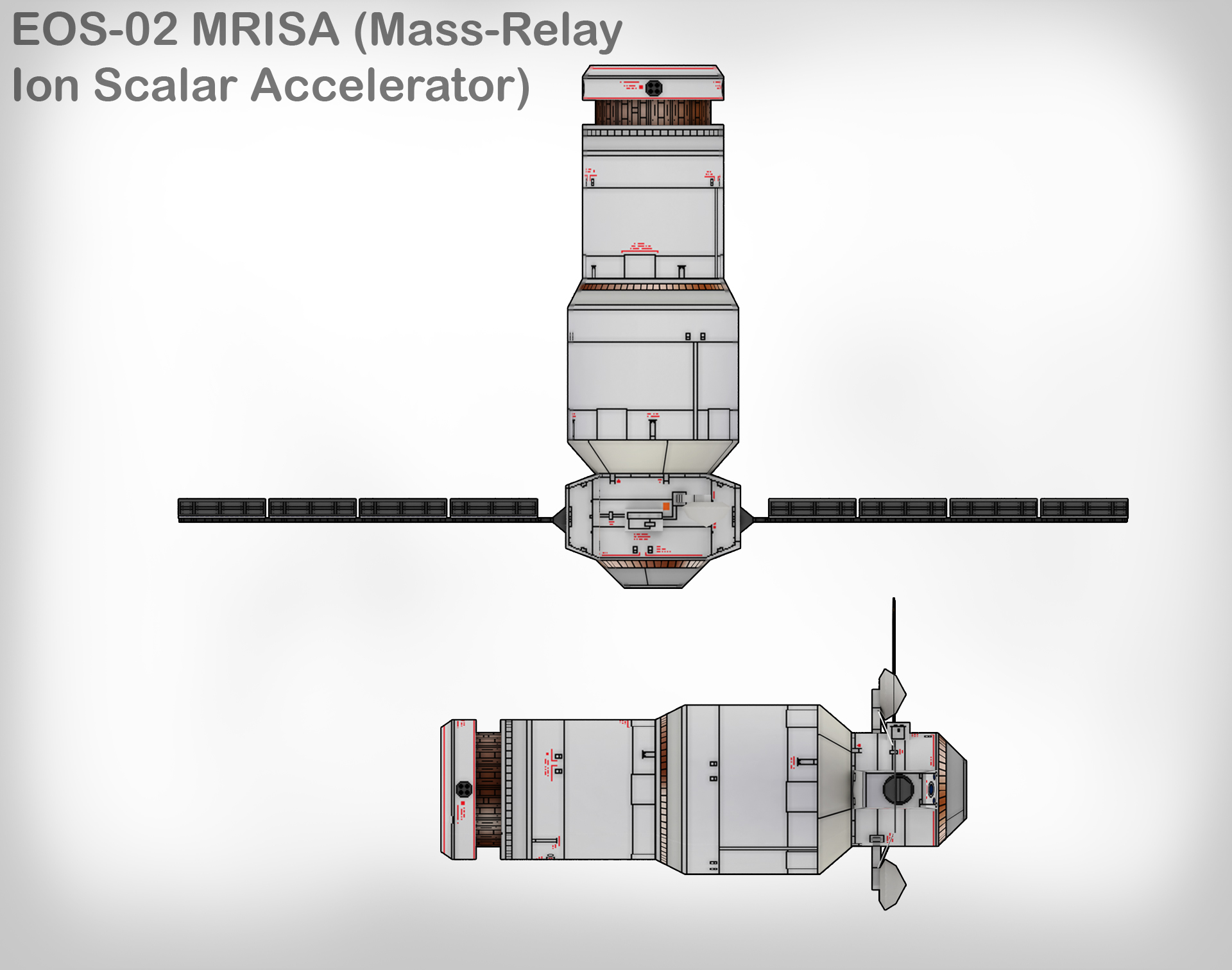 The EOS-02 MRISA cannon is a orbital Scalar Accelerator cannon that operates using a enlarged and up-powered version of the same concept used in the aircraft-mounted L1WAC.
(Note: if you look at the description of this unit you can see more complete background information.)

With this unit it was created the “Ion Rain” mutator

Here a screen show of the EOS-02 in use: 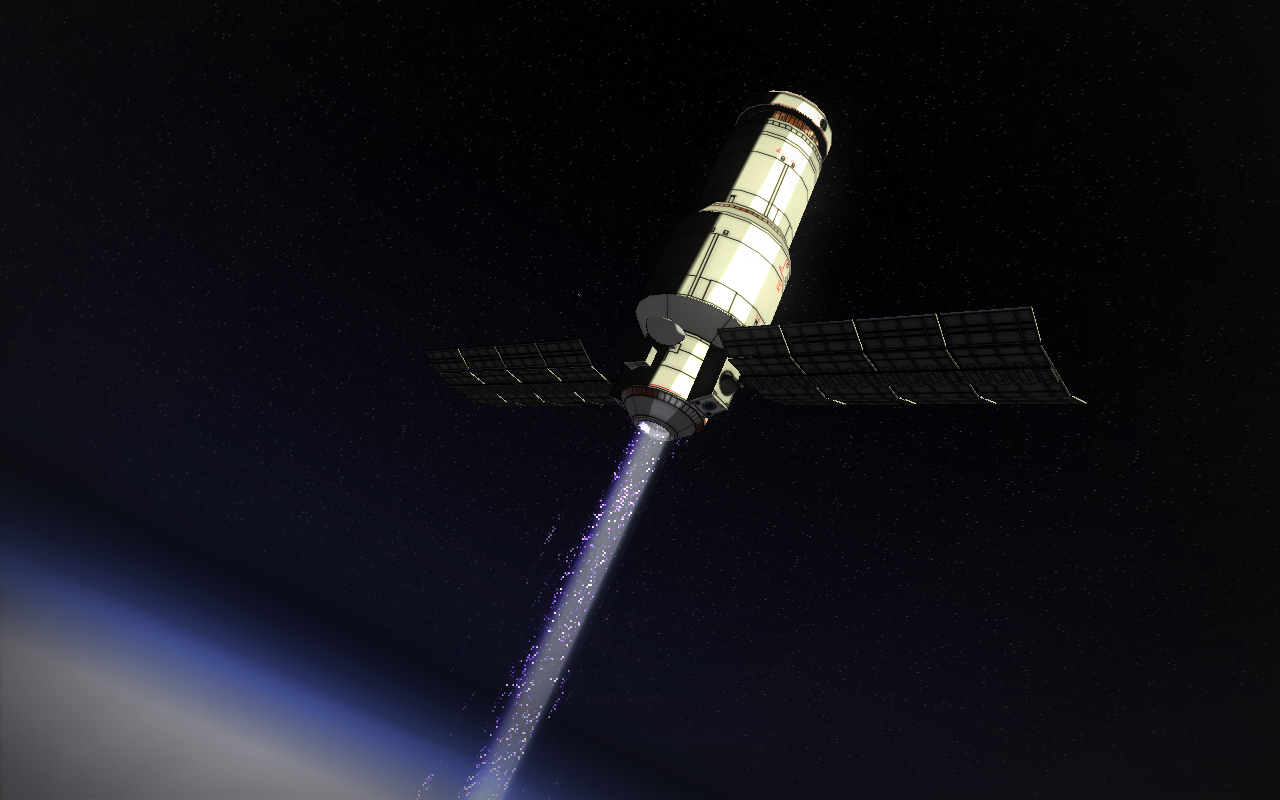 This ion cannon should be considered as low performance and suited to targeted a single unit, rather than being a weapon that deliver destruction to a wide range.
While the mutator have 7 units in space they are more disruptive than actually effective.

(Also this is just small Ion cannon, a bigger, more powerful and more intimidating version will surely be added in the future)

Moving on with the additions, has it was mentioned in the past report, due to a frequent request of the F-16XL, it was decided to finally add it in the game.
But instead of adding directly the exact variant in question, is being added instead the whole evolution that led to that unit and it will move on to beyond

The F-16 SCAMP II is the next stage in the development of the F-16XL production line, and is a stepping stone between the sharply swept delta of the original SCAMP and the contoured lines of the XL. The wingspan has again been increased, trading more mobility for further increased stability, range and weapons carriage. 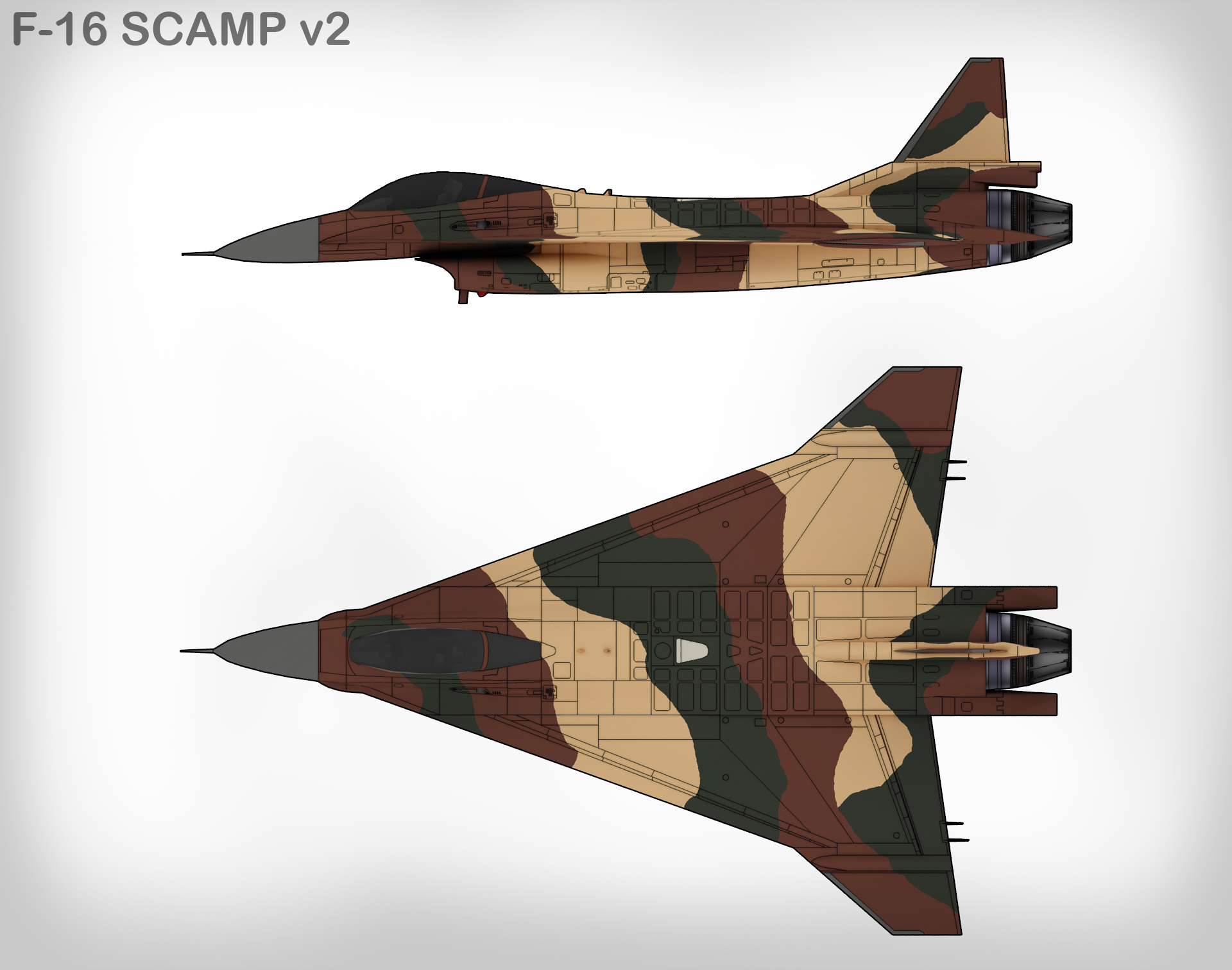 An interesting point of this variant is that it contains three all-moving parts in the tips that control pitch, roll and even yaw.

Like before, here is a size comparison be have a better idea of the scale of this variant: 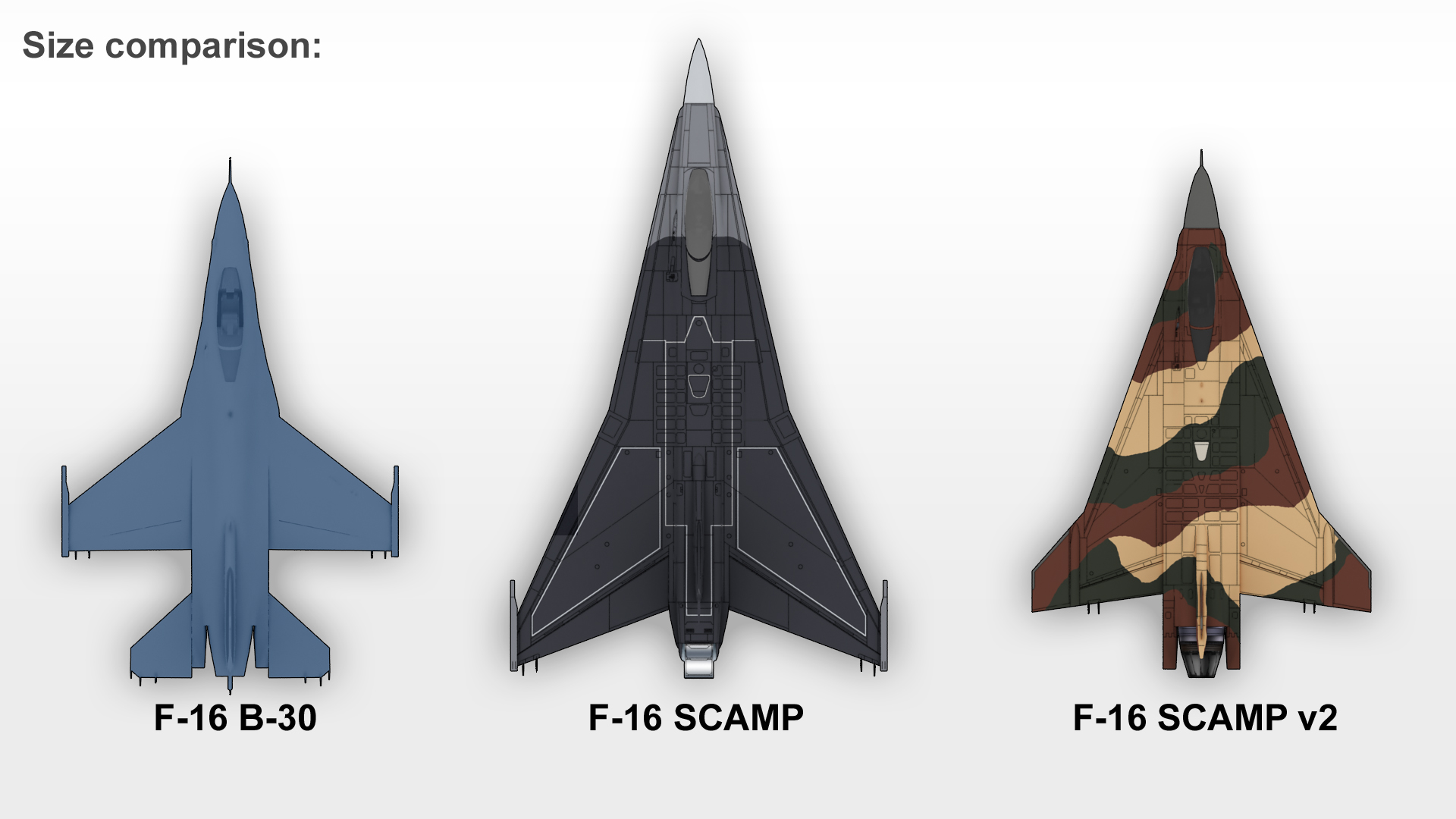 As you may notice, the first version is exceptionally long, but this version falls back to a more compact size as the original.

Another unit that has been added in this update is somewhat different from the usual.
It was requested as sort off a joke unit, but also to add another element to the Su-47 family:

And here is the story behind this unit:
“Produced from a mistake on the production line in an aircraft development facility, a mistake which led to over 200 SU-47 Berkuts having their wings installed backwards, led to the testing and rather limited deployment of the SU-74 Tukreb. Not wanting to fall behind on quote, the factory cleared these mis-installed Sukhois for active deployment to various customers throughout the world. The factory was promptly threatened by various air forces throughout the world after they received the shipment, however further testing of the mistake aircraft saved the firm from destruction by tomahawk cruise missile. In field tests the "Tukreb", as nicknamed by the first pilots due to lack of other reporting name, was at least on par with the standard SU-47 and was allowed onto the battlefield in limited numbers.” 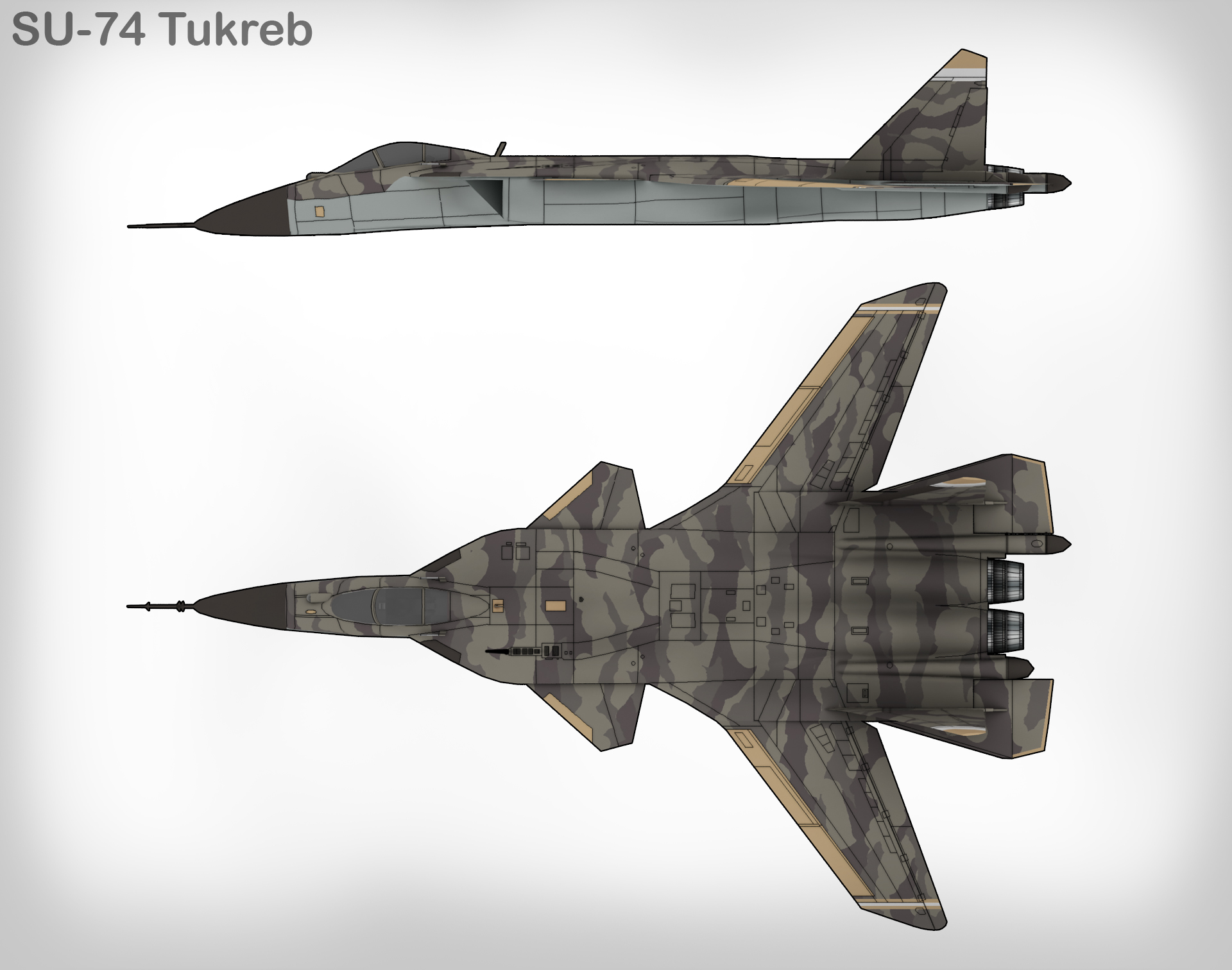 While the Su-74 is just a fictional unit in a what-if scenario it is still regarded as combat capable like any other unit, with a performance corresponding to alterations and be balanced gameplay-wise.

Regarding fictional variants, there have been some suggestions in the forum, that have been taken in to account, but just to be aware, real variants will always have more priority.

Also here are other additions/change that you will find in this update:

There have been added new gameplay sounds and improvement of the existing ones.
Something that may interest modders is the newly added possibility to set distinct hud sounds for each unit.
In this version you already will hear that some aircrafts have different warning sounds.

Other addition, due to the feedback in the forums is the inclusion of an achievement system in the profile, (for now they won’t be called accolades to avoid confusion).
The challenges that are included in this update are most basic, also as it uses the already existing profile data is very likely that anyone with a significant playtime has most of the awards already conquered.
This system built to be easily expanded and it will be in the future, so expect the addition of much more awards in the near future. (Also if you have any idea for a new challenge feel free to suggest it)

The last addition is the new menu music, this music is composed by José Pavli and it will serve as a preview of his work as he will be responsible for composing the soundtrack of the next campaign that is expected to be released shortly after the mission editor is completed .

And finally preview of the next report, can anyone guess what it is?
(With this you all are aware what will be the next gameplay mechanics to be introduced in the next update)

I guess that new update will be out of the Blue.

>Out of the Blue

Next updates tag line, love it.

Sounds good, that will be the next update's title!

IT MUST BE A TOMCAT

NEXT UPDATE IS CARRIER LANDINGS

Seem like we will be "have"ing a "blue" in the next update.

nope, the 117 has a v-tail. this looks more like the lockheed "have blue" demonstrator from the 70s

Which means you eventually implement stealth?

As for the ion cannon thing, could be nice complement to Odin OSL mod.

Also lol tukreb (again). Reminds me of that B-71 joke.

Hi there!
I follow now this game since it´s early beginning and i must say:
This is a game what i have waiting for!
Totally modable, much content, and even has a Skirmish mode to play your own Scenarios alone (i really hated the fact that in the last Ace Combat on only can play Campaign for Singleplayers, cause i don´t play online).
But now i have a question! I really hate it when you must use the mouse in all the menus, but when you are in flight mode the mouse is just not the right "Thing" to fly those jets. What i mean do you plan to add in "Xinput" (Xbox 360 Controller)? And when not, can you make it, so that we can use the Arrowkeys from the keyboard and not just the mouse? Remember, i talk about the menus!
I hope you understand what i mean. Thank you so much for a reply!

I use my xbox controller already. Just go to options/settings, controls, then use the set of boxes next to those bound to the keyboard.

Can't wait for this update to clear Desura so I can get my hands on that delicious orbital goodness!

I got a question for you: since the Orbital Laser/Mass Accelerator/Ion Cannon actually has a model rather than just an effect, does this mean that the altitude ceiling is being made higher?

Well you can already make space maps if you know how the orgre engine works.

No the Altitude ceiling is the same, but every aircraft has its own service ceiling.

If you're going to add new acheivements, you gotta add some crazy and funny ones. I'll have to think of some later. And if you guys pull an Ace Combat 3 and take planes into space, that would be absolutely amazing.

Aside AC3-style space level, I'd like to see a mission where you must intercept satellite/meteor/colony drop (?) and your planes are equipped with ASM-135 ASATs as SPWs.

Is perfectly possible to use ASM-135 ASAT, but the aircraft will need the support of an AWACS or ground support radar to be able to detect and lock to the satellite.

That's what the buffing feature was implemented previously for, eh?

Man, this game keeps getting better and better, also can we get the s-32 and X02 Wyvern?

From the forum:
"No Ace Combat fictional planes please."

Unless if you want to get sued by Namco, that is.

TS, I LOVE YOU, I LOVE YOU SO MUCH. YOU ARE A BELKAN'S DREAM COME TRUE. THE BELKAN TUKREB IS NOW OFFICIAL.

Update finally popped, can't wait to start it up and see what's what.

Tell Mr. Pavli that he is ridiculously good with his orchestral sections (I didn't like the middle-end bits with the generic light-techno afterwards.)

What do you mean?

I dunno, the first bits with the low brass sounds very nice, but I'm not too sure about the middle where the piece just degenerates into generic action/tension.

I have to say though, the orchestral music gives the game a sense of scope that you don't get with other forms.

Apparently I just too late for the party:

The sattelite can even dropped down? Or destroyed? With ASAT ( Anti-Sattelite missile ) missile? :D

I didn't noticed the name reference of the Ion Sat. You sly guys. I only recognized it as a real reference due to the Starfighter. Bravo.