Post news RSS Quarries of Scred - Rolling down the roadmap

An update on progress for Quarries of Scred, and other general musings upon its development.

Quarries of Scred is a bit of a personal experiment.

The goal, is to make a game within approximately 1 fortnight, and get it the hell out the door. I approached Arnthak in the entirely opposite fashion - it was a project wherein I wanted to relearn skills, and pick up new perceptions. This is different. Scred operates by the same rules I instilled with my Pixel Challenge of the Day, many moons ago - GET IT DONE.

So, after a week and a few days - where do we stand? In a pretty good position, is the answer.

Consulting the revised roadmap, we see that the core gameplay is roughly done - barring the actual 'huzzah, you've won' type condition. There's a branch of the PR trunk in motion as well - I've begun posting here, as well as covering the game via my twitter account and signing up for promoteindiegames.com, which might be an interesting venture of itself. I've also been posting to facebook a fair amount, though have yet to make an actual page over there.

There's a few key things that need to be done, still - a trailer is definitely a requirement, as is the troubleshooting info pack. It's an unfortunate problem of working with Java, that a lot of people tend to have trouble running the game (often because I've compiled it with an up-to-date copy of the JDK, and people's environments are older). This will take a bit of time, though I've already gathered some info that is over on the Arnthak troubleshooting page. I've also acquired some great info & help from Chris Gray of Lugdunon with regard to making Linux builds - which should make Tom from Lenna's Inception happy.

So, what's bee rolling through so far? Well, based on some feedback from last week, we now have this info screen that pops up: 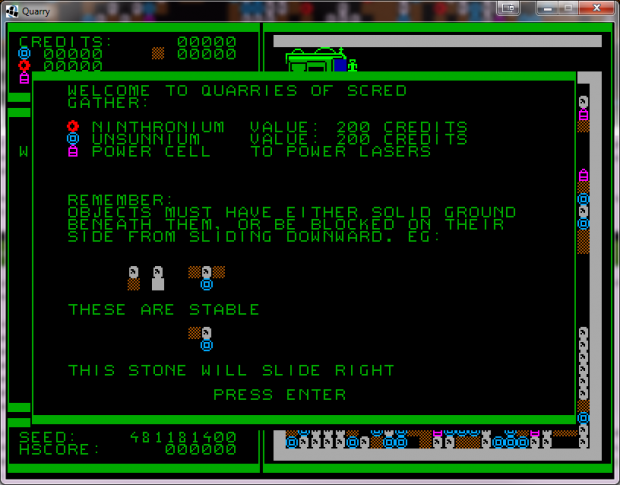 This comes up on game start, and when the player presses F1. There's also this stats screen, which helps to foster long-term play: 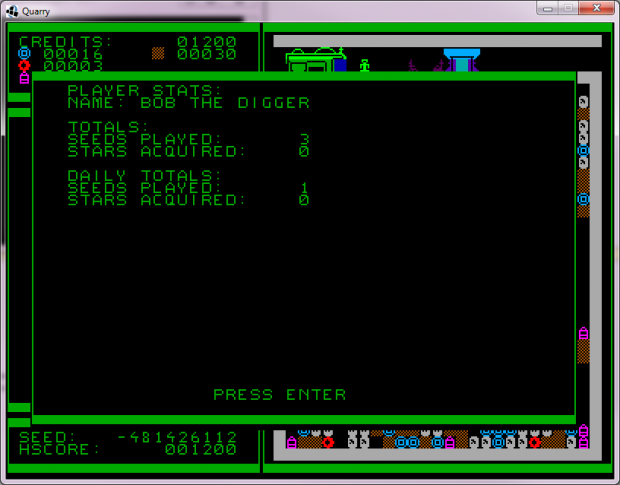 The idea with this screen, is that players will develop an extensive log based on both daily play and practise runs in normal seeds. I'll be adding the capability to add one's own name shortly, so that Bob won't take credit for everything...

Another thing that's slowly expanding, are the shops: 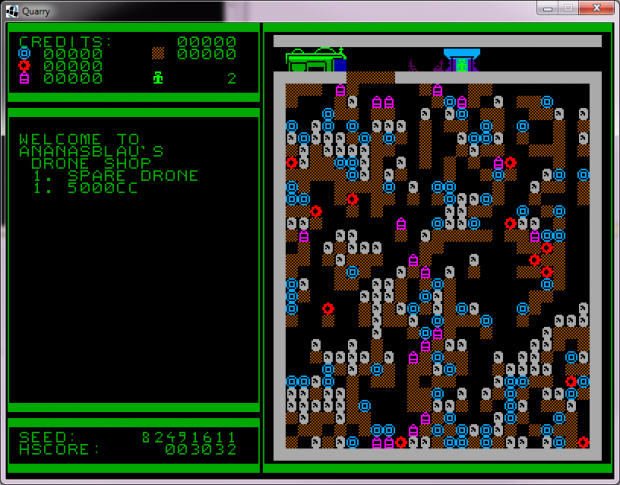 So far, the following have been implemented:

In the future, we'll be adding a Gem refinery, that the player will be required to return to periodically, and a Rocket that will close off the seed when you have acquired a set amount of loot. This will enable you to 'win' the game, thus racking in on the scores listed in the stats.

So, how does it play? For those that don't know, QoS is based upon a game I played as a kid, which it turns out was a clone of Boulderdash. I've taken that gameplay, added in shops, lasers, land mines, self destruction and a slightly different model for the maps. I'll also be adding in the requirement to return gems to a refinery in order to actually get creds for them. Right now, it has that same fun-but-harsh element, which is what I was hoping for.

There's not too much time left for the first-wave of development, so the only thing to do is push ahead. I'd love to get more bookending done, as this is the part that pushes it from 'experiment' to 'game', that a lot of the gamedev stuff I see lacks.

Give it a try

There's actually a build up on IndieDB as of last night - feel free to test it out and let me know what your thoughts are. Here's a convenient link!

All said and done - getting Scred 'out the door' isn't the end point. I'd like to stress that it's simply the point where I think 'I would pay for this'.

- As a side note, I'd like to thank everyone who's tested/helped/advised on QoS so far - and all the awesome folk on twitter. Feel free to annoy me, over on: @DarkestKale

There's a new build available, you may want to check that out - it has some new shiny things (lots, actually)