This is the presentation of Quantum Quest, the video game we are working just now. Classic RPG and boardgames mechanics, settled on a cyberpunk city. 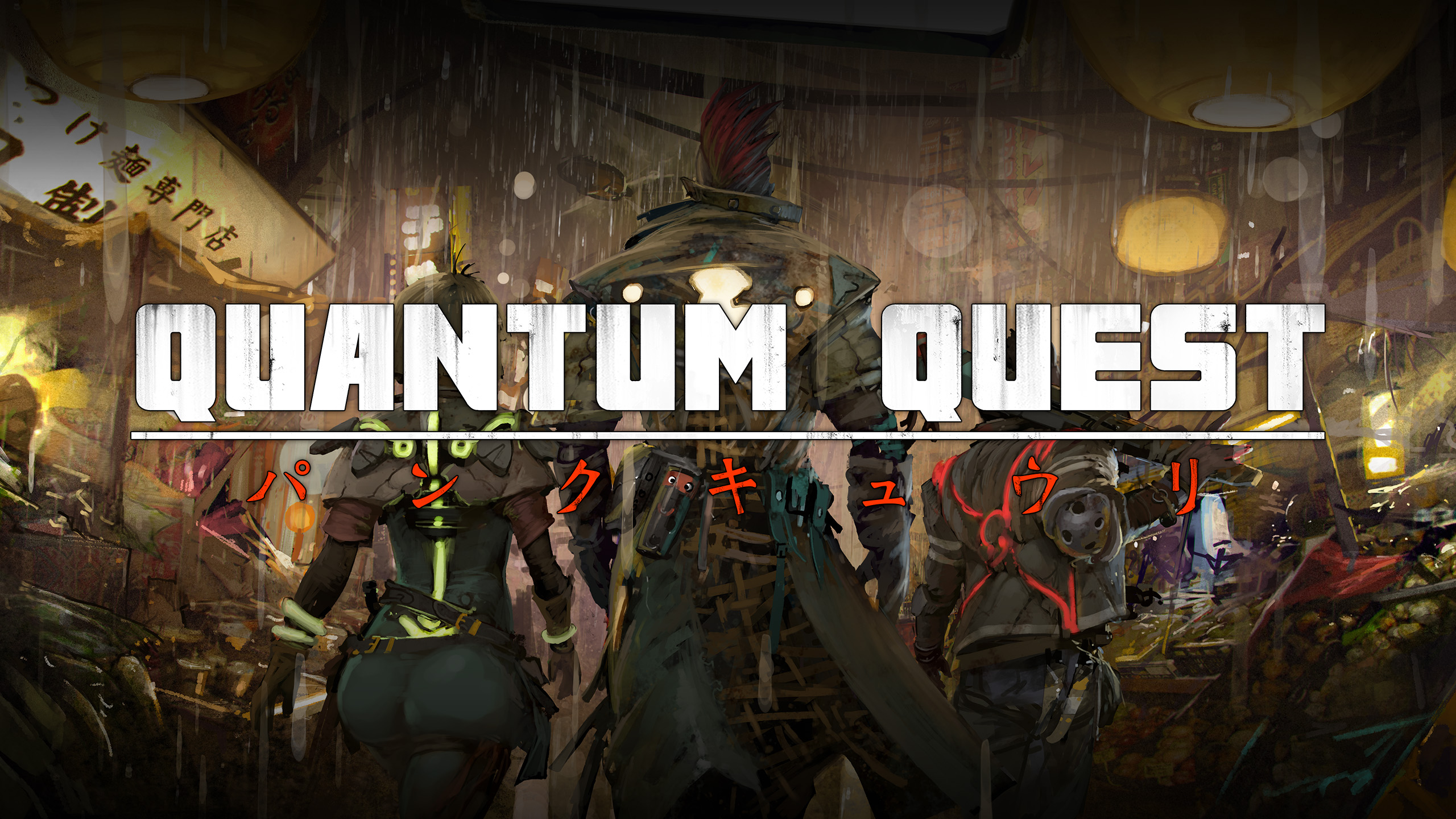 Quantum Quest is a virtual tabletop video game. It mixes elements from board games with deck management and tactic combat. The staging and the mechanics emulate a table with boards, miniatures, tokens and even dice over it. The player will throw these dice in the game.

Substantially, Quantum Quest has been designed as a traditional board game, which people can play with others. We'll have single player story mode and multiplayer mode, with an editor mode. 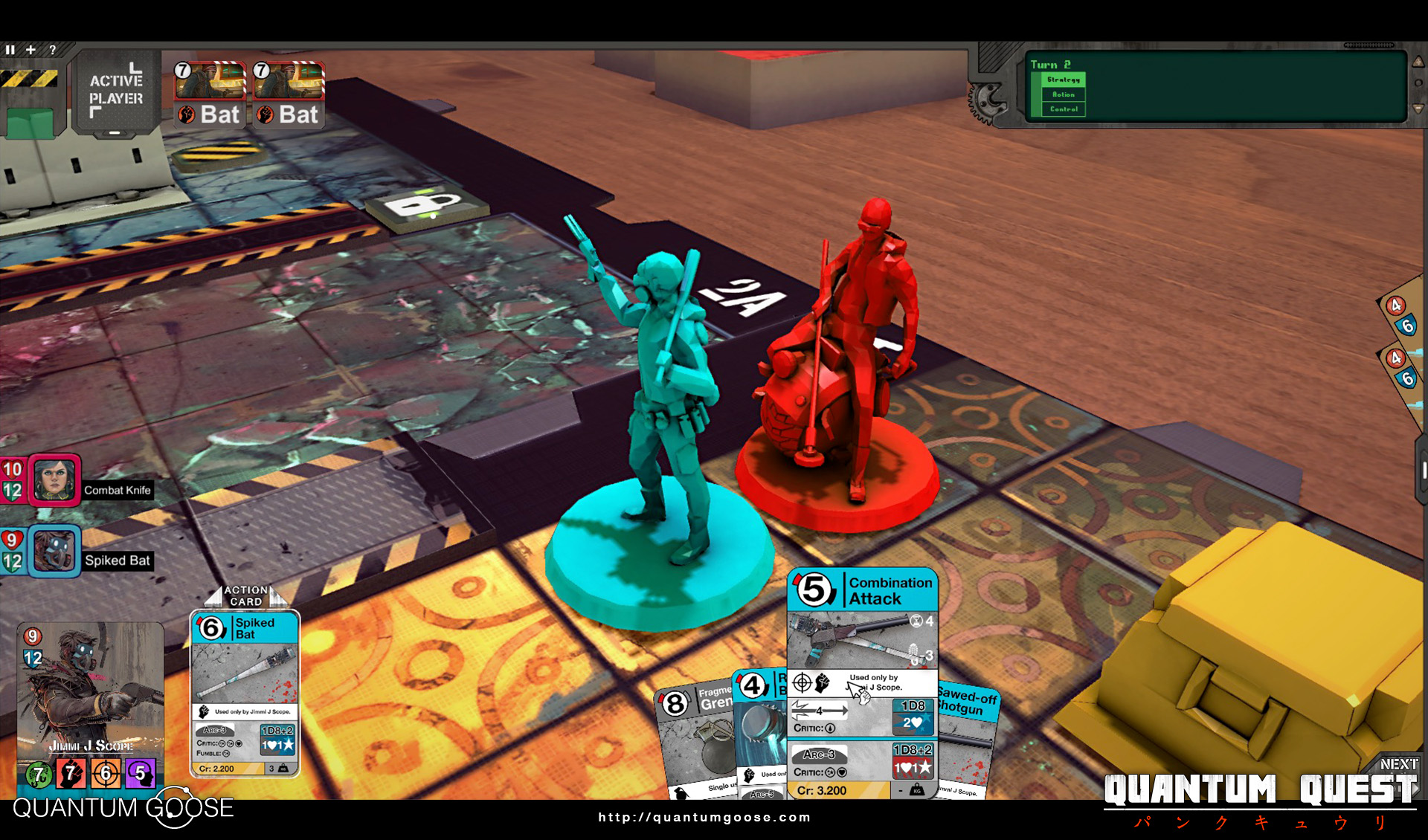 In story mode the player controls a group of bounty hunters. Their lives are ruled by violence and the hard live in underworld, and they are involved in a conspiracy which concerns them and their love ones. 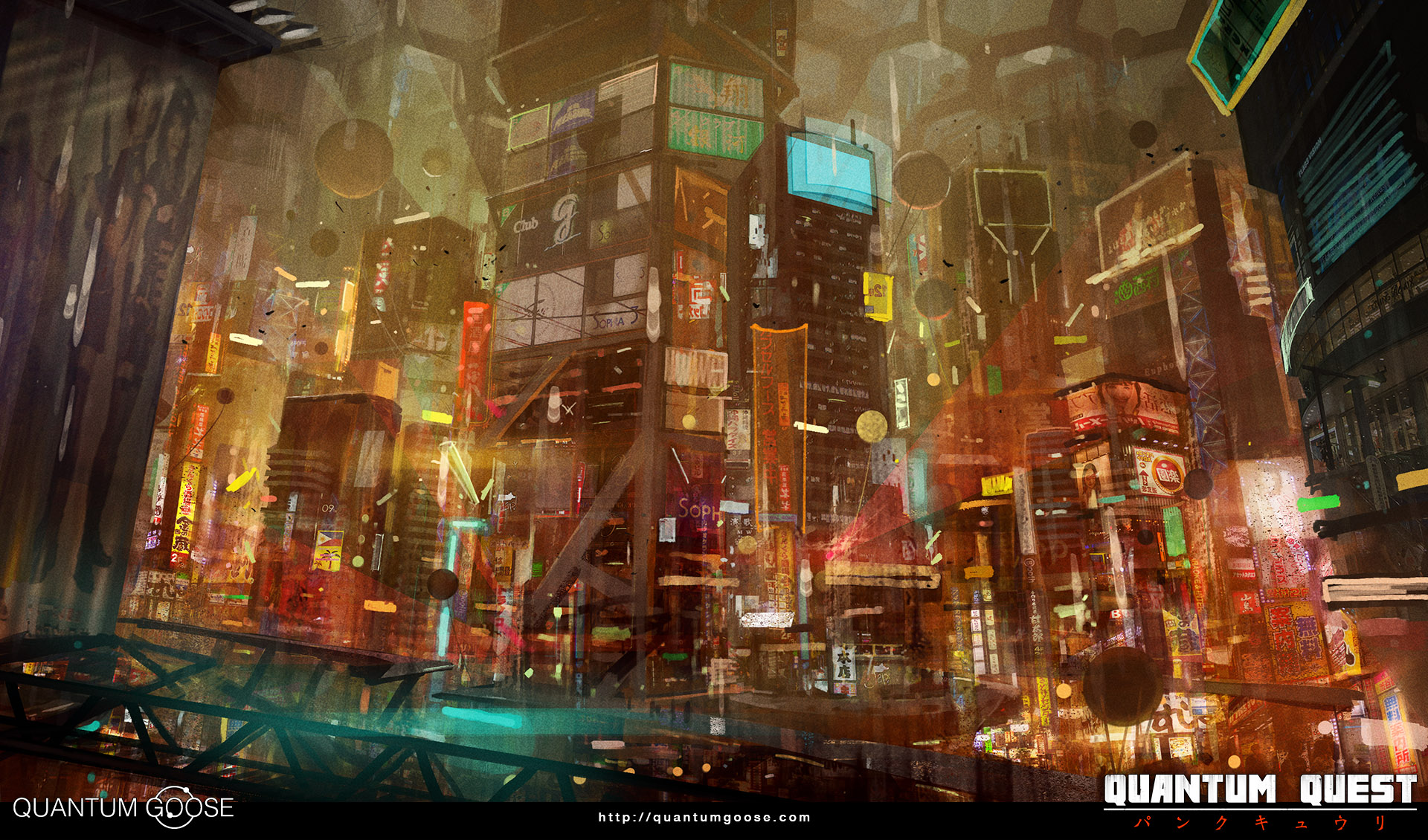 Human population has reached 35 billions of inhabitants on Earth. The big cities have grown vertically turning on Megatowers. While the richest citizens live on the surface, the other 85% of the population gather on the subsoil.

The human being has achieved to exceed his own natural limits through science. Genetic engineering, nanotechnology and artificial intelligence have been assimilated on the society in every city on the planet.

Resources shortage leads to a big crime rate underground. Illegal markets, technology traffic, drugs and corruption accumulate on the foundation of the cities. The lower levels are so dangerous police forces have their access prohibited.

Games will always share a series of common features, which is board game exploration and combat. Some of them will have special rules, and the length of each game will vary depending of the size of the board and the different objectives players will must fulfill.

A way to measure the length of a game and its complexity will be through the number of cardboard will be used. The more boards we have, the more complex and longer the game will be. Each board is made of 10x10 squares. Most of them have one or two walls, and the modular system makes all of them match among the others to create longer rooms, corridors or complex sceneries.

We have an event system which makes each mission playable to play them randomly.

Each turn is divided in 3 phases: Strategy, Control and Action.

On the Strategy phase the player will planify what he want to do. This is a secret phase for the other players, and all of them decides at the same time what they'll do on the next phase.

The Action phase is the moment all the actions chosen by the players will be revealed and all of them can see what happens on this turns as each player performs his selected Action card.

Control phase gathers special events, some action resolutions or character states, like someone who can be injured or shocked. 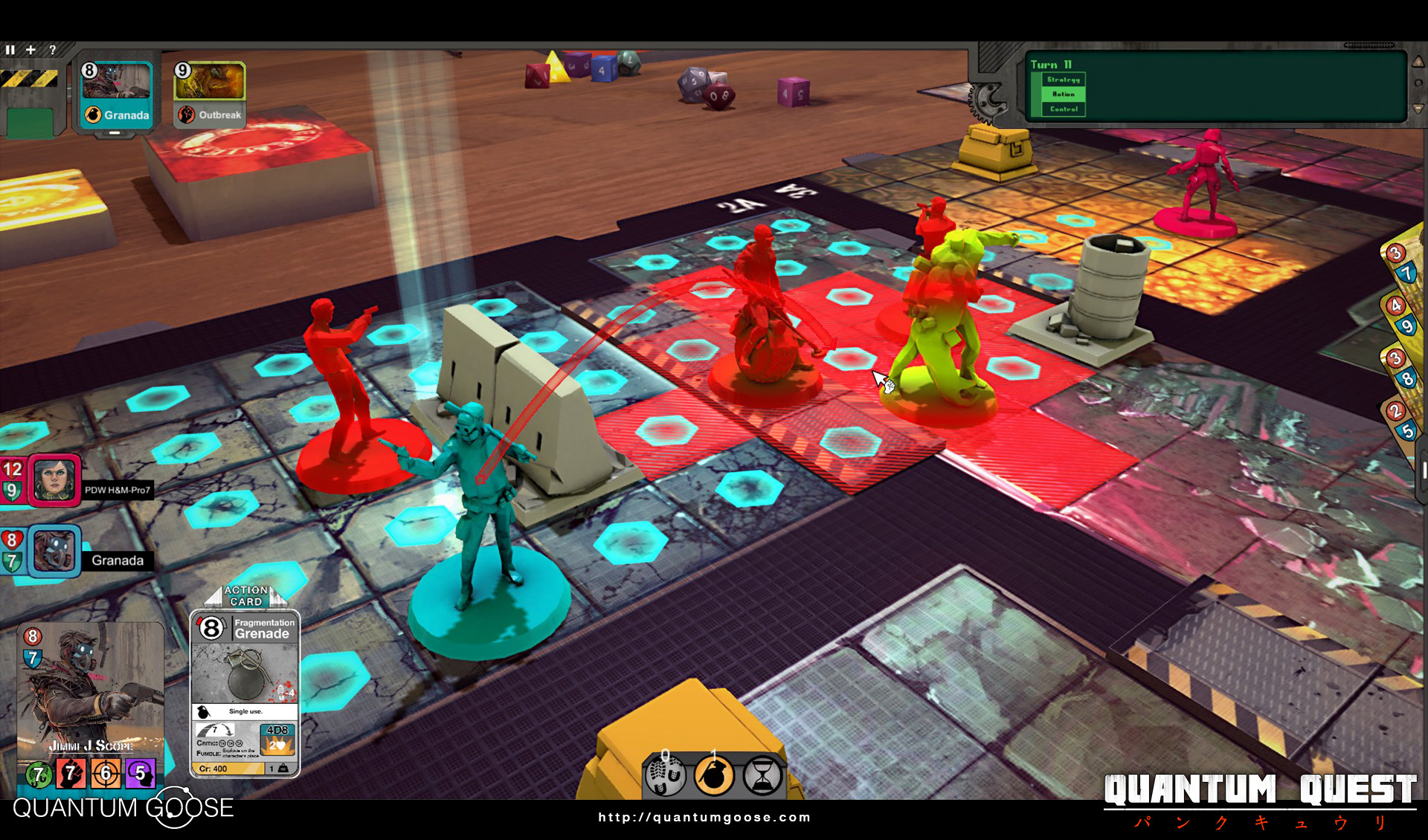 Each player has a deck of actions. Besides, he will take more cards as rewards on missions and events. He will arrange accessories, inventory, and temporal bonificators on the game.

Each action card plays an object or special action. Some of them are only wearable by a specific character, and other ones are common objects, like a simple knife or a grenade.

The types of cards are:

As well as Action deck, we'll find another decks: 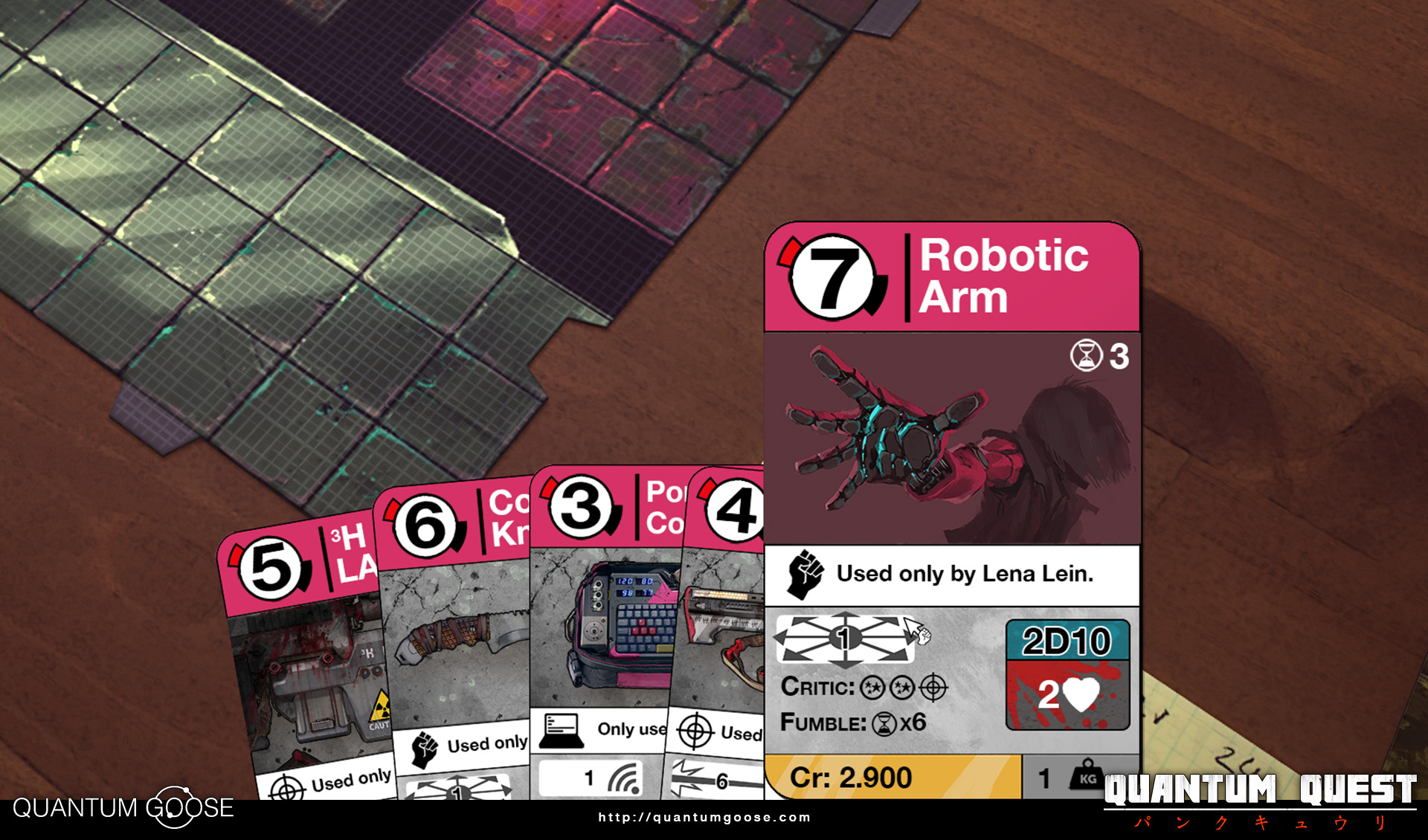 There are some factors you must to have in mind on Quantum Quest when you are resolving a combat. Substantially a combat is made of 3 steps:

If one of these steps doesn't success, the process is stopped and the action ends immediately.

We have the Panel Dice to assist us on the combat, where we can see how we roll the dice, and the LCD monitor, which is going to give us information about what is happening on the combat.

To defeat an enemy, you must drop his life to zero. Sometimes you'll need to weaken his armor before hurt him.

Depending on the cards you choose for your strategy, you will need to get close to the enemy to hit him, or attack him from the distance behind a coverage. You can even combine the actions of several players to accomplish your strategy. You decide what you like the most! 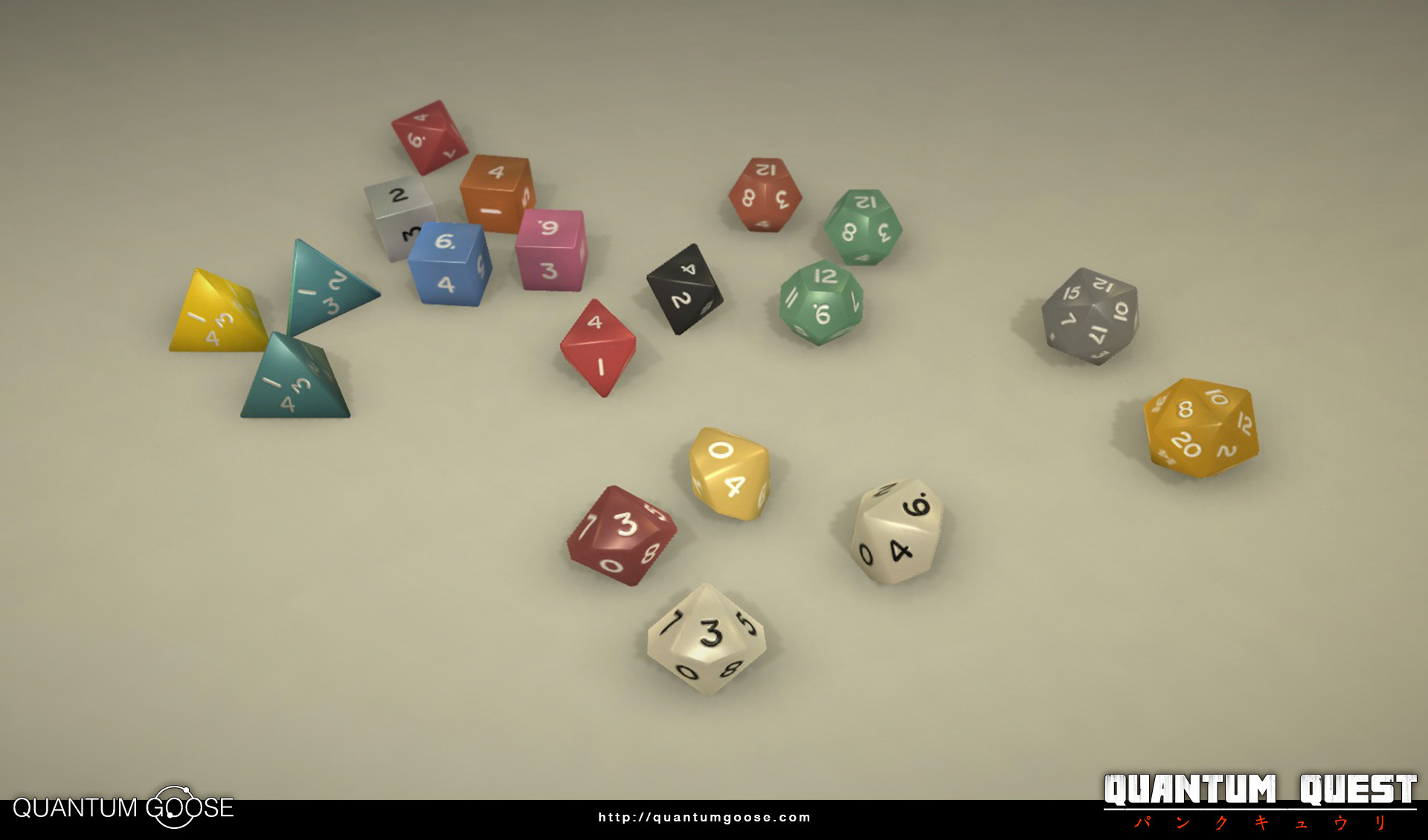 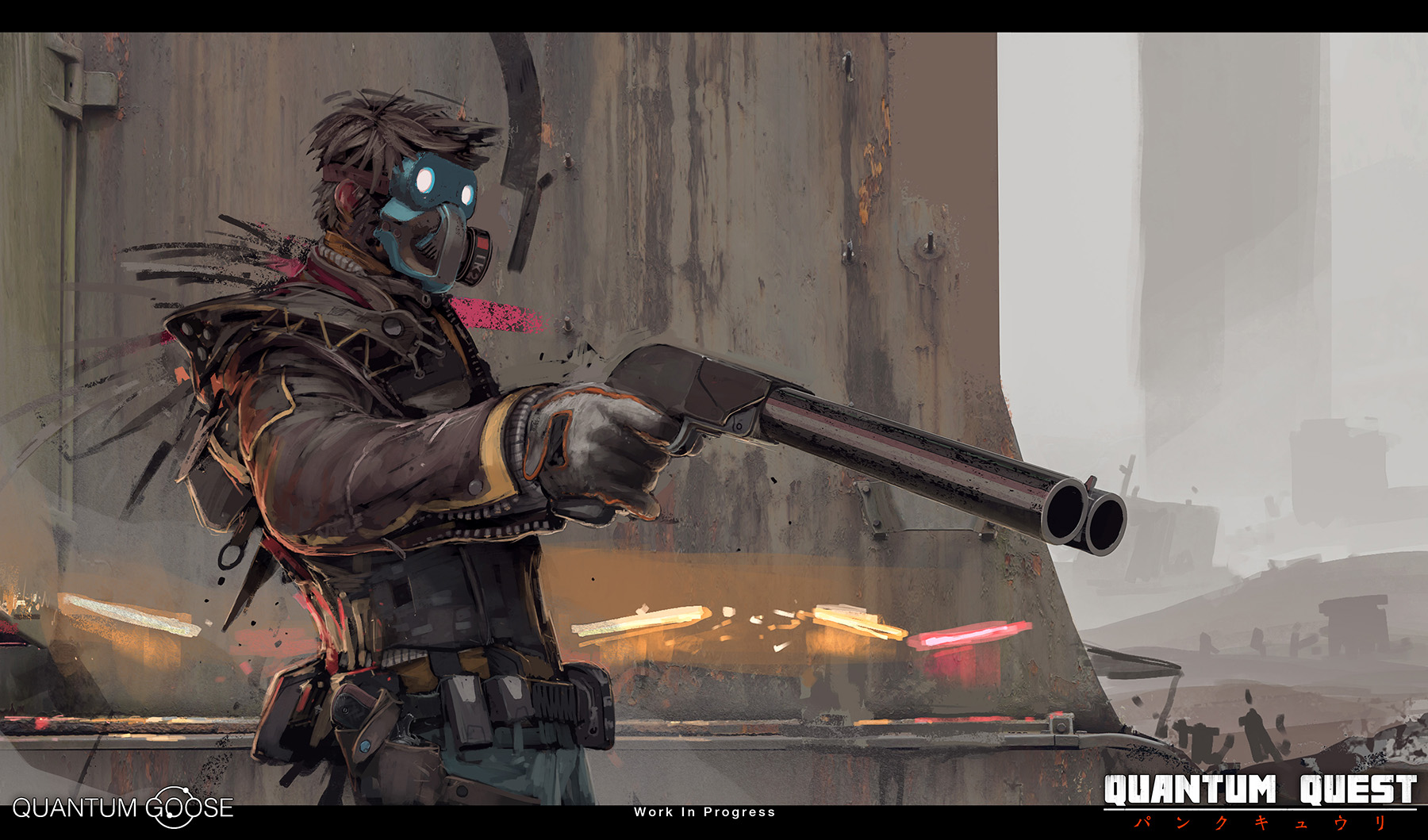 The main characters of this story are mercenaries. Bounty hunters who desn't have any other way of life than entering in the underworld to make the dirty job of the main city. They are euqlly detested and needed by Mewatower's citizens. When govern needs a shock troop to impose the law, command these task to the private military agencies.

These contract soldiers live full-time dependent on the surface's needings, and they go along their lives through complex surgeries to improve their bodies. Some of them finally are more machines than organic beings.

We follow on Quantum Quest the story of a group of these legal killers. For now we know:

Jimmi J Scope. Former soldier who must return to his job. Tired out of violence, he must become involved again in this bloody world on the sewers to find his lost brother.

Lena Lein. Born on the deepest streets, from an early age she showed a great skills for this kind of job. She was sold by her parents as soldier when she was still young, trying to avoid a worst destiny. She is very close to Jim.

Jack. Born to this life, he really enjoy killing. He lives like a nomad in the streets and he is only worried of win money and waste it on mundane pleasure. 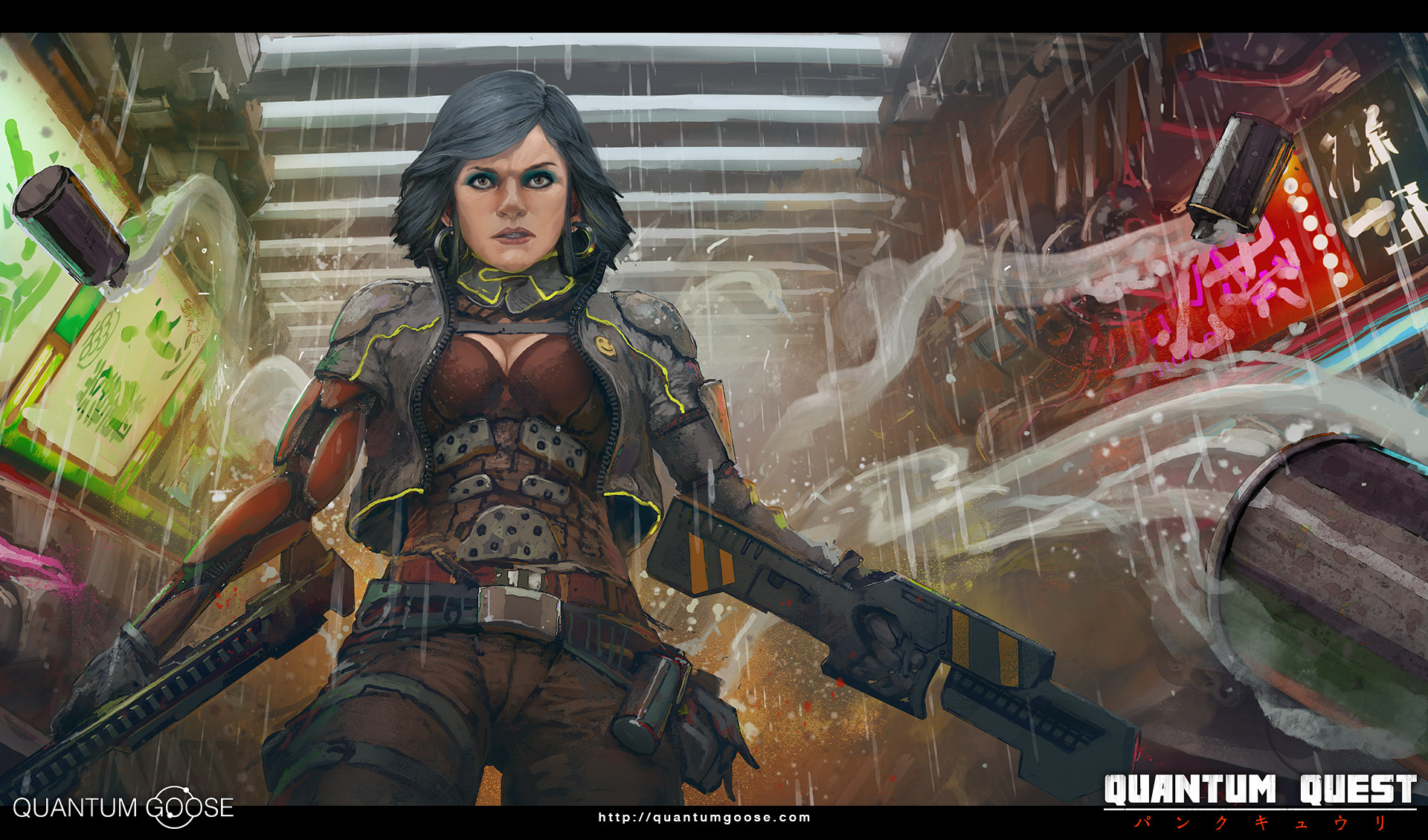 In Quantum Quest, main characters will found lot of enemies. They will be of different factions and levels. At the beginning of the game they'll be involved in brawls with Skull band members, a hipster smugglers of the sewers, who trade with raw materials and basic necessity products on the underworld.

As bounty hunters, we will enter on deeps of the city, where surface's laws doesn't exist, and where people makes anything to survive.

Aside from this bikers Skull, some factions or "families" we'll find are: 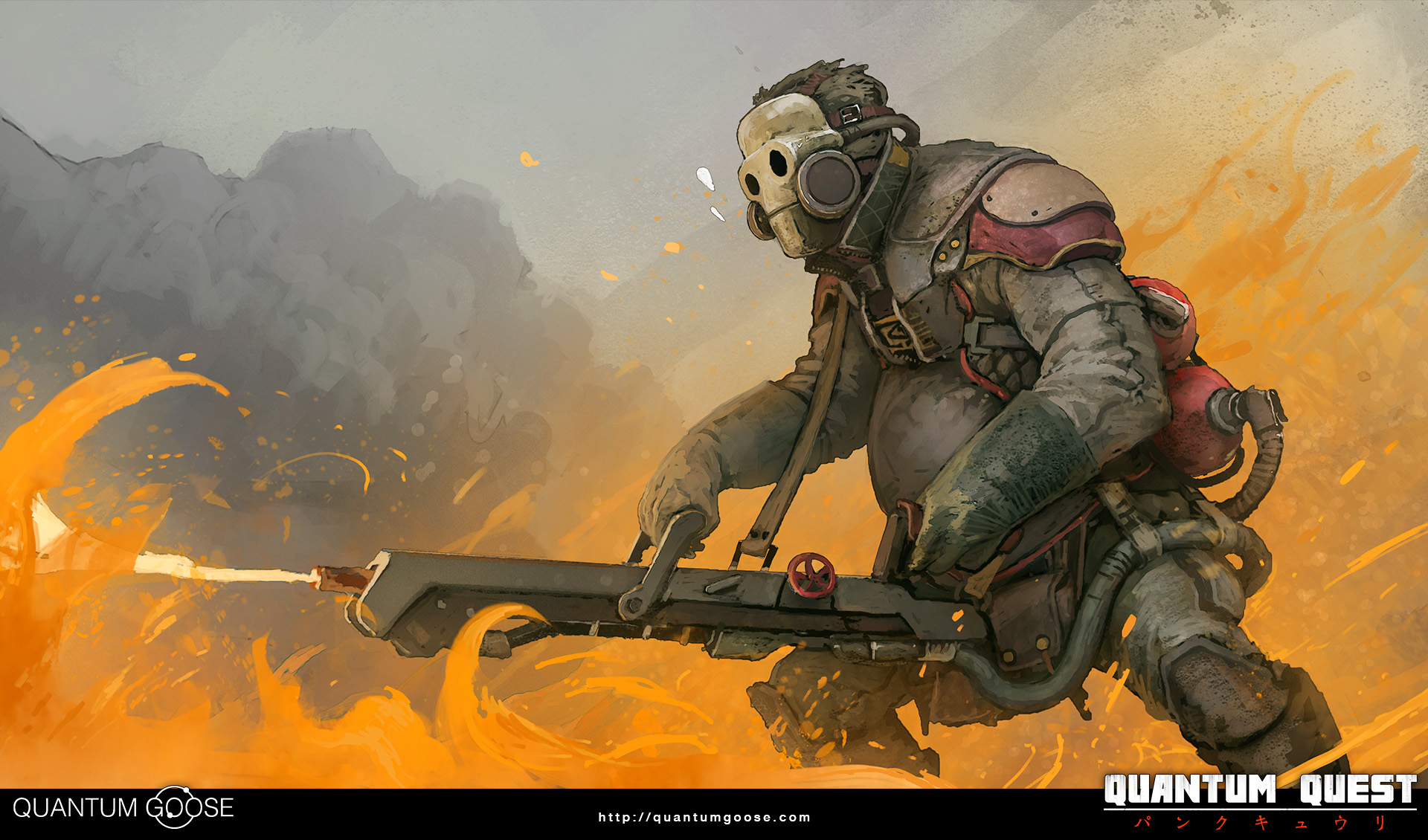 Our characters will not fight versus common enemies, but against Villains with capacities so powerful like theirs. 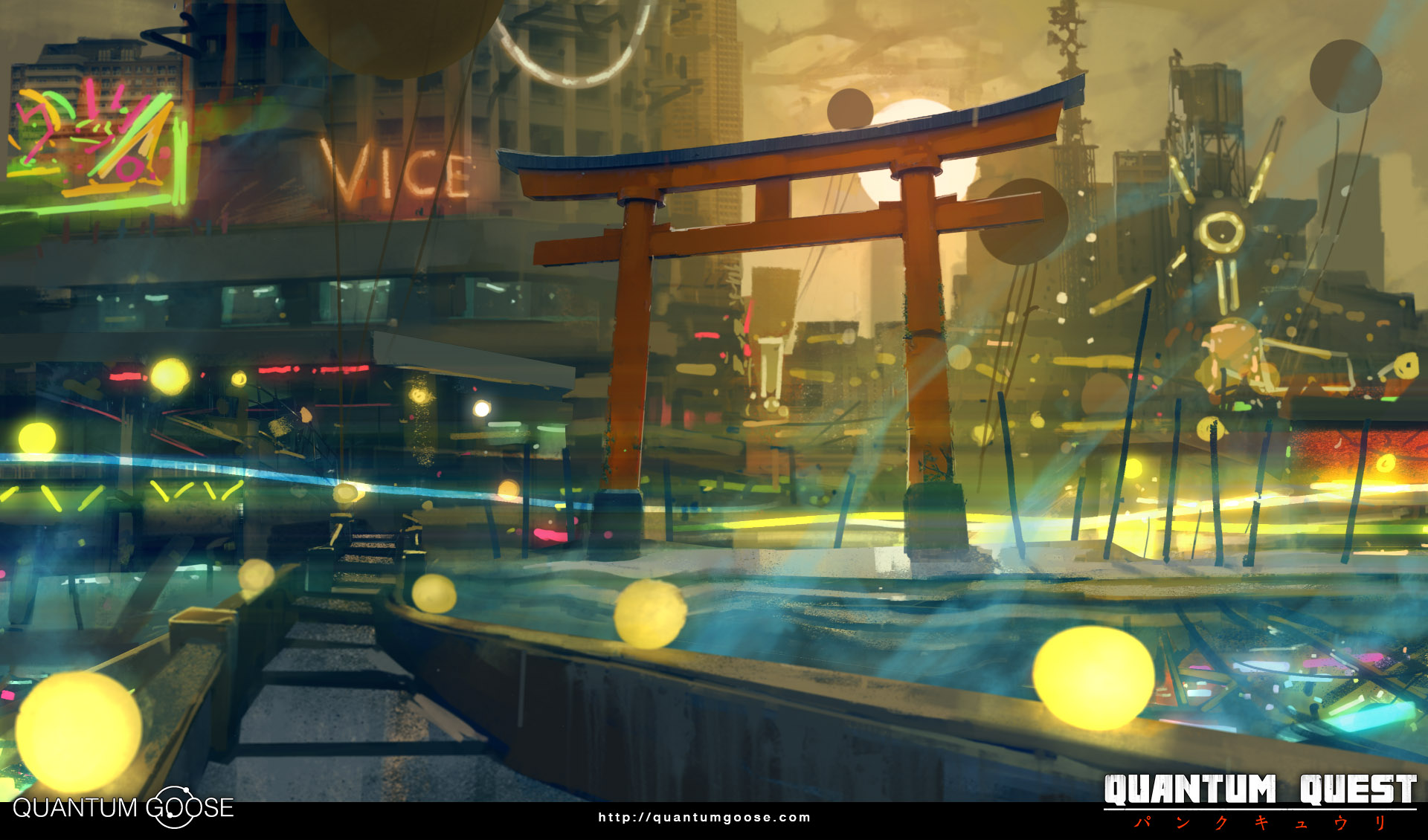 We want to develop Quantum Quest and publish it on Steam.

Besides, we want to focus on the ambience and the mood of Quantum Quest, and develop the main story of the game on comic format.

We want to make the best video game we can, and share with people our passion for gameboards and science-fiction stories. We are creating a good story inspired on the things we love.

Currently we could say that we are working on the pillars of the game. We are half-way to have a 100% working video game, and at the same time we are developing the world, the characters and the story.

Carlos NCT. Graduated in Fine Arts on UPV. He worked on titles like Castlevania: Lords Of Shadow 2 (Mercury Steam, Konami), Raiders Of The Broken Planet (Mercury Steam) and Capture The Flag (Lightbox, Paramount), besides Legend Of The Five Rings CCG (AEG).

Juanjo Hernández Gómez (Microtono). Composer and SOund Designer. He has worked on Project Xinatra's OST, both Uboat's OST and SFX and Vaccine War's SFX. He works on video games, film and documentary sector. 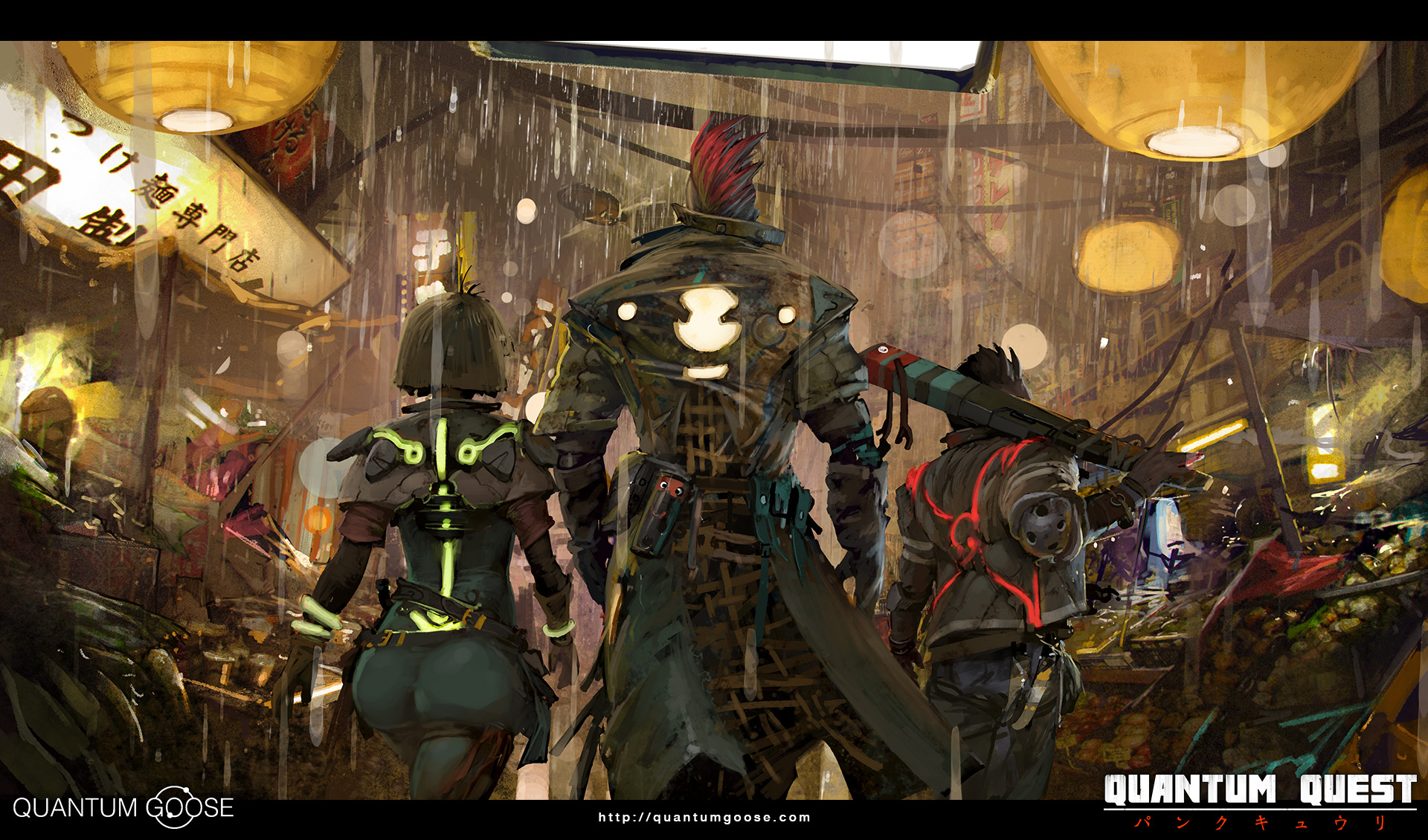 Looks like a fun game. It's tabletop and cyberpunk which is cool.

Oh, THANKS to all for your words. Today we are going to test it with people of our city. Hope it goes well... cross fingers!

Any public alpha tests? Not only local.

That is some high-quality AAA art right there! Impressive.

For now we don't have any public alpha. We want to improve all we can this demo before submitting to the community.

By the way, all who want to test it before it's public, can write to info@quantum-goose.com to join the first to access a private beta.

Last 14 of July we made a local testing in Meltdown (Valencia) with other projects like Genpoc and Super Rocket Shootout. It was great! People enjoyed Quantum Quest and give us lots of ideas. Now we are working hard to give a better strategic combat experience for the next gaming test.

We have opened a forum to discuss the development of the game. We'll very glad all of could you join this forum to help us and take part on the improvement of Quantum Quest. We need your support!

We still working hard on summer, here it is the second official teaser of Quantum Quest.

Hi All, we are Introducing the artwork of Quantum Quest world

We want to show the amazing work of Carlos NCT, the great artist behind Quantum Quest artwork and design. We feel really proud for the huge work and experience showed in this video. The music is a long piece of Quantum Quest soundtrack.

After the local testing in Valencia, we have received a lot of feedback and we want to explain some things we are improving the last weeks.

- We have integrated a cover system and designed new objects for the board.
- Now, we can shoot from the corners of solid walls and gain a special protection.
- The effectiveness of the weapons changes through distance
- We added some visual help to know:
- Life and armor
- The value to impact in a cell before roll the dice
- Different colors to know the effectiveness of the weapons
- Our New custom dice with Fumble and Critic symbols, do you like it? (You can see here: Goo.gl)