Posted by EleonGameStudios on Dec 1st, 2015

We are very excited to present you our newest and feature-packed update: Pre-Alpha 4.1!

Without further ado: we added the first iteration of a faction/ownership module AND playfield settings for PvE and PvP to the game! The latter can be set individually for each playfield (e.g. each planet can be PvE or PvP). Read on below for more details.

We also added early customization toys to play around with: want to change the color of the sky or have a lower or higher sea level for your lakes and oceans? These are only two examples of the customization options, so go ahead, give it a try and show us your favorites!

With an easy tweak in the config file, you can change the sky color so that Omicron will look like that: 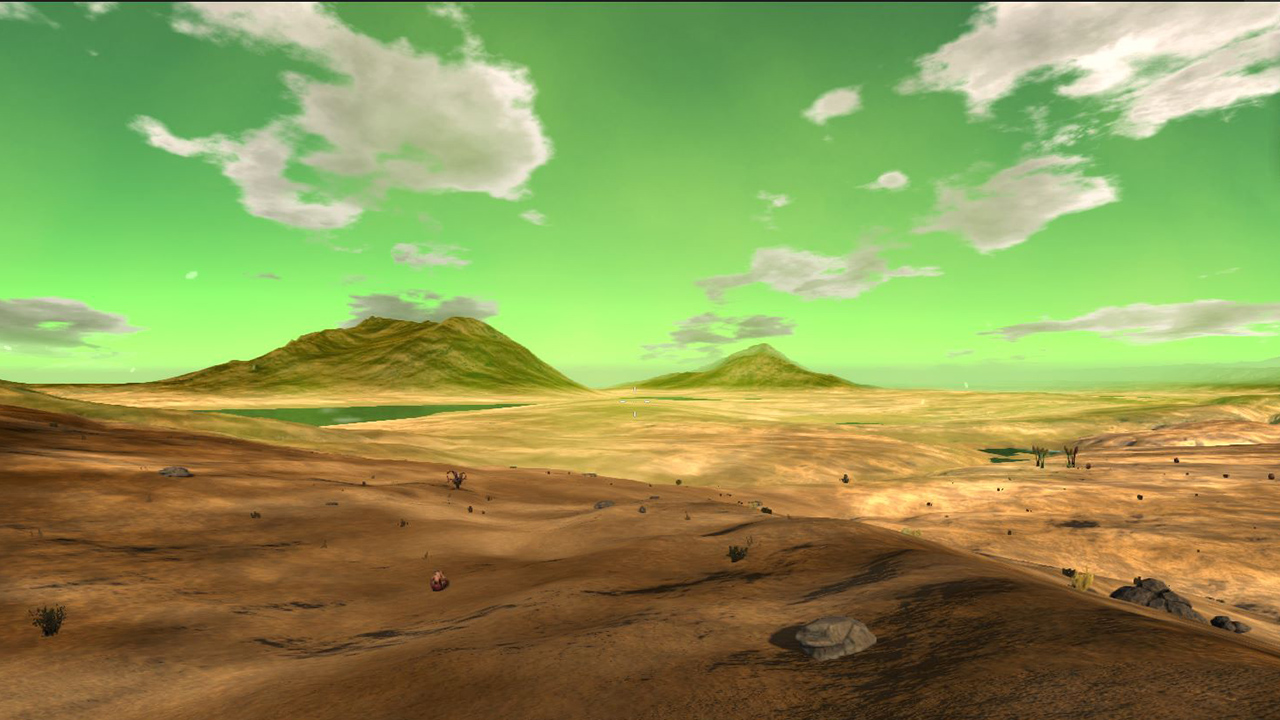 You can also easily change the water level. This screenshot shows Akua with a lower water level: 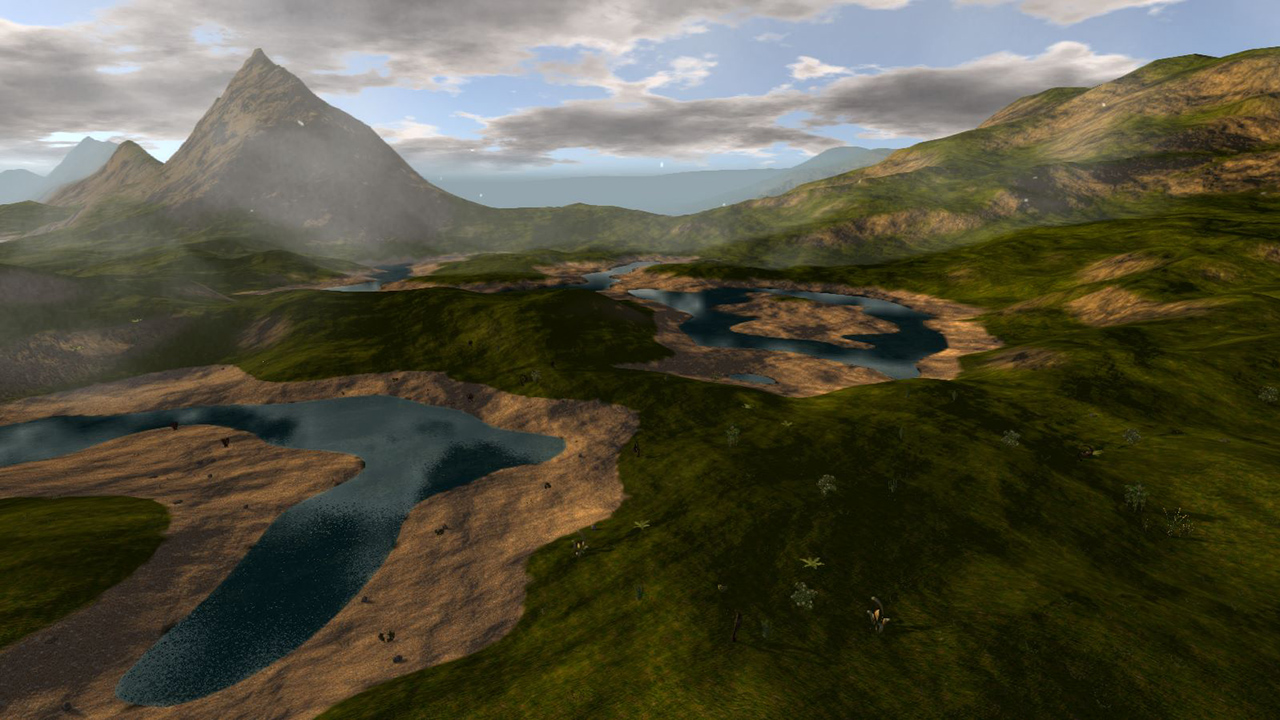 In addition, we added a slew of changes, improvements and bugfixes. Read on below for the full changelog. Among others, you won't run out of resources on a multiplayer server anymore: watch out for meteorites bringing in new sources of ore!

One of the resource meteorites that drop if your resource deposits get depleted: 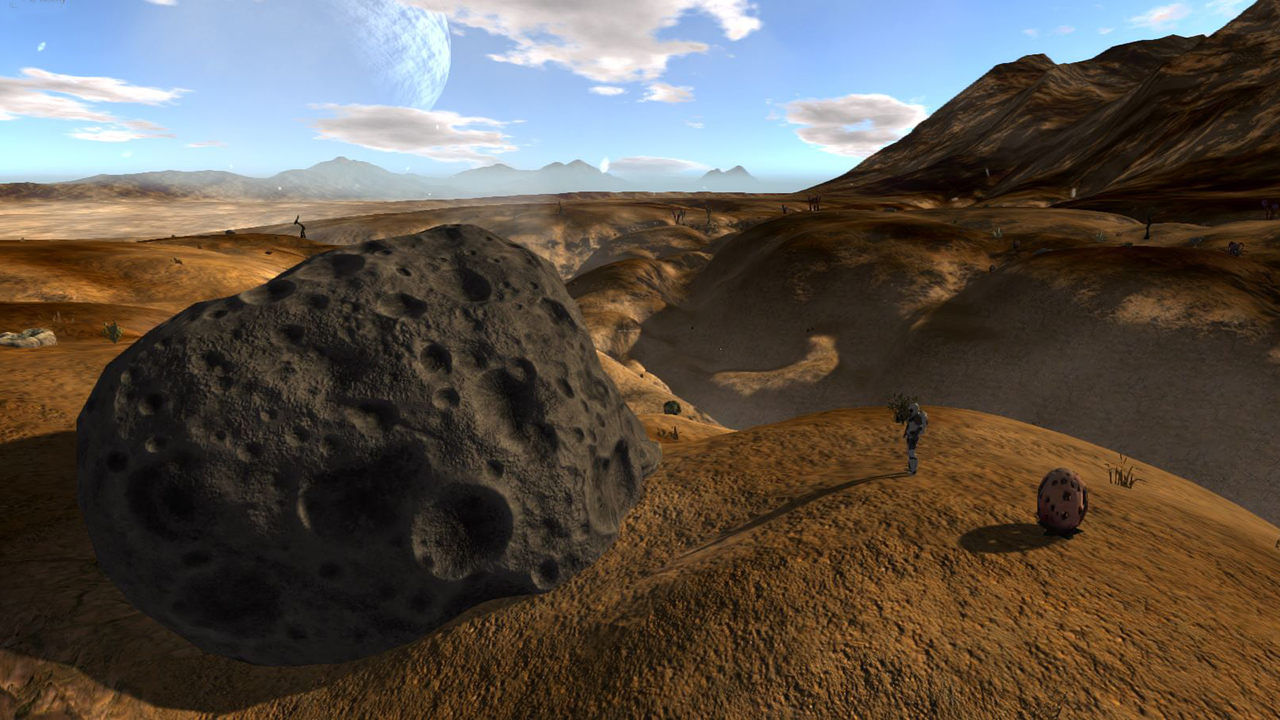 A message will notify you about the meteorit. Open the planetary map (M) and look for a new resource icon (A) that has a "meteorit" in its name. As for now: meteorits can be found hovering a few dozend meters above the ground. Approach the meteroit and it will descend the last meters down to the surface. (This is a temporary solution!)

As always, all the new features we are adding to the game with this update, are early versions or prototypes - not the final product! Thanks a lot in advance for your understanding and for submitting any issue to our bug forums

One of the new alien plants on Akua: 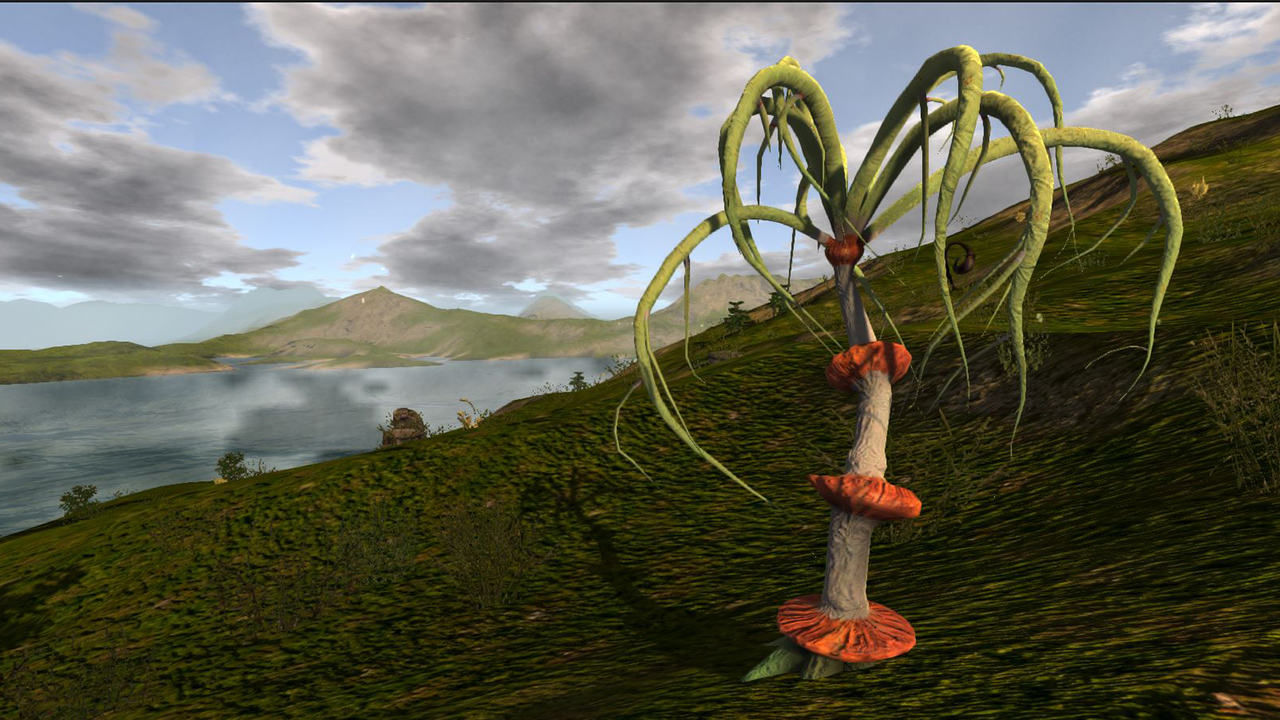 Next steps:
- Offline/Log-out protection of structures on PvP playfields
- Adding possibility for a "fresh start" on a server if you are stuck
- Better admin tools for dedicated servers: kick, ban, etc
- Force field for hangars
- Solar system

….and last but not least: we can't give an exact ETA (yet), but we can already say with all certainty, that the Solar System will move planets further away and your capital vessel will finally have its purpose

How does PvP, PvE, Factions and Ownership work? 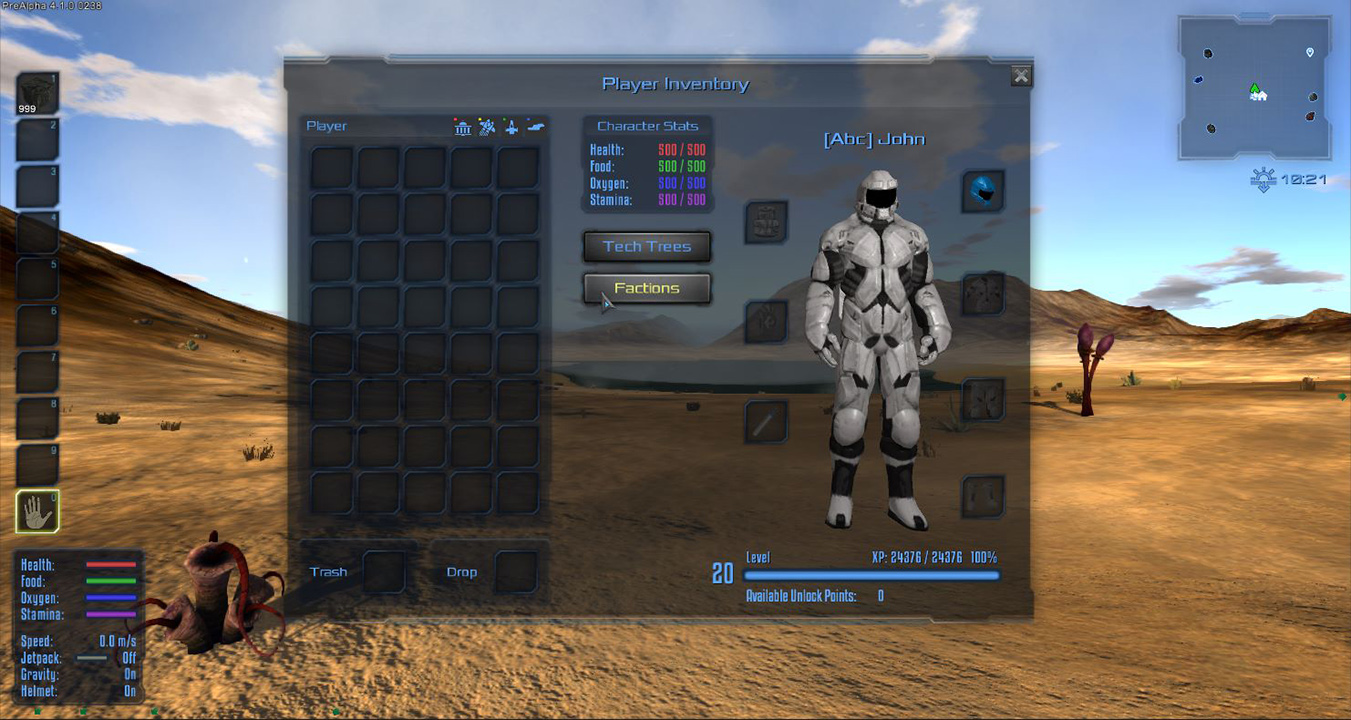 PvE vs. PvP playfields:
- In PvE playfields, you cannot do any damage to other players or player-built blocks. However, you can do damage to alien buildings as long as they have an alien core (if you destroy the alien core, they are considered as "no faction" and further weapon fire will do no damage to any blocks. From then on, you can only remove blocks with removal & repair tool - see below)
- In PvP playfields, you can do damage to other players and blocks like in the previous version

Removal & Repair tool:
- The removal & repair tool can only remove blocks of your own faction, public faction and the no-faction structures.
- As a result, you cannot use it to break into "alien faction" structures anymore. At least as long as they still have an alien core

Ownership / Factions (Overview):
- You can only access cargo boxes, constructors, cockpits, etc if they belong to your own faction.
- In addition, you can access any block that belongs to the public faction, of course.
- You can only access the control panel of structures if they belong to your own faction or to the public faction
- Doors open only on structures if they belong to your faction or to the public faction
- If you have not created or joined a faction, you can change your bases and vehicles between "private" or "public" use. Private has the same rules as if you were in a one-player-faction.
- IMPORTANT: If you are a member of a faction and change a base or vessel from public or private use to "only by your faction" in the Control Panel dropdown, this can NOT be reverted back to "public" (yet).
- If you are not a member of a faction, you can switch from public to private back and forth.

Join a faction:
To join or create a faction, open your inventory and click the FACTIONS button.
- Regardless of whether there are factions available or not on the top left screen, you can always create a new one.
- If there are factions available on your server, you can APPLY to join a faction. The creator of this faction needs to approve your applications. You won't auto-join ANY faction. 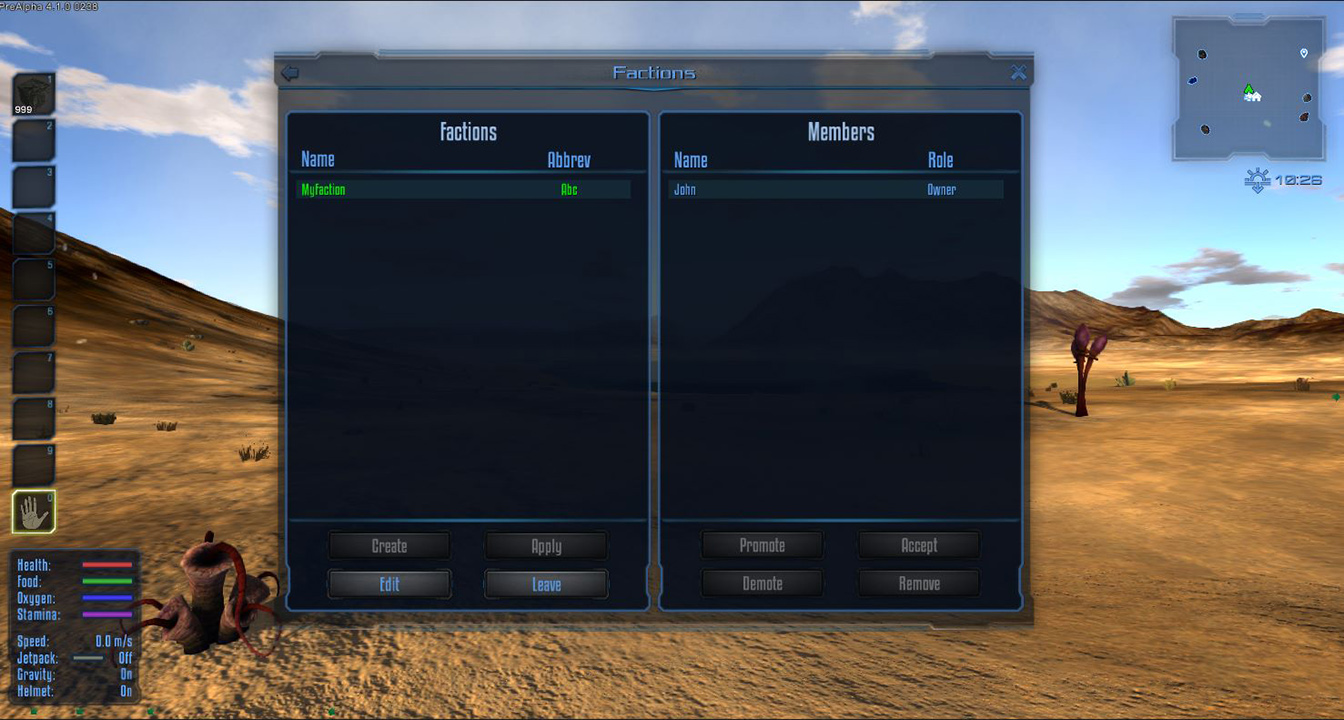 Here is the full Changelog of Pre-Alpha 4.1:

Main Features:
- Added PvP, PvE, Factions and Ownership
(Per default, Akua and Orbit are PvE playfields, the other playfields are PvP - however, you can change this setting, see below)

Other Features:
- Added faction internal chat: press "," to open it
- Added playfield config files for basic customization: now you can configure e.g. sky color, water color, gravity, playmode (PvP, PvE), and also biome type of a playfield (to switch biomes you MUST change also the name of the save game - otherwise the map will not be correctly displayed)
- Added resource count for deposits. Resource deposits that are nearly empty (<10%) are no longer shown on the map, i.e., map marker is removed (you have to start a New Game to correctly enable resource counter)
- Added resource re-generation: if resource A is depleted on a planet then resource meteorites of type A will fall on planet
- Dedicated server now auto saves every 60 seconds
- Added dedicated server command line parameter "-dedicated " to allow custom config files (.yaml extension must not be changed)
Example: Make a batch file with the following content: "start EmpyrionDedicated.exe -batchmode -nographics -logFile Logs\DedicatedServer.log -dedicated MyCustomDediConfig.yaml"

Changes / Improvements:
- Added server password caching (now you only have to enter the password once)
- Improved ship controller: rolling Q / E is now more accurate
- Added simple clean up algorithm: Bases/HV/SV/CV will be removed if one of the following conditions is fulfilled:
(i) a player did not visit structure for 24 game hours AND structure has no core
(ii) a player did not visit structure for 24 game hours AND the structure is smaller than 25 blocks.
This clean up algorithm will guarantee that there are not too many unused structures in a playfield which reduces performance (especially on dedicated servers this is a problem)
- Added 30 Unlock Points for players that have reached max level to unlock new blocks
- Added food category to Survival Constructor
- Added planet overview list to map window
- Added sentry gun for Bases and Capital Vessels in survival mode
- Added new constructor 3d models for Large and Advanced Constructor (to replace old constructors)
- Tweaked texture for thrusters to prepare for color masks
- Tweaked texture for Core Block, Fuel Tank and Passenger Seat (less scratches)
- Added new spotlight for SV / HV
- Added several new explosions
- Added "Back to inventory" button to Tech Tree window and improved visuals of Tech Tree window (larger icons)
- All doors in POIs are now closed per default
- Set culling of windows to a much higher distance
- Removed color overlay for sniper scopes
- Player list (Scoreboard) now scrollable
- Added 2 new plants on Akua (Moved plant to Omicron that grows Alien Plasma ZR1 - replaced with Alien Tentacle plant)
- Driller / filler can now also remove grass
- Increased overall range of CV weapons
- Removing Alien turrets now also give resources
- Reduced number of turrets and sentry guns on some POIs (for performance improvements)
- Added Sathium ore deposits on Ningues

awesome! keep up the great work