We launched the Foxhole prototype last Thursday. Here are some stats about on the launch and some information about our Greenlight campaign.

We're really excited to say that the launch of the Foxhole prototype was a huge success. We were only expecting a handful of people to check it out, but we had over 13,000 downloads in less than 4 days. Big thanks to everyone who played the prototype! The biggest match we've seen so far has been 20 vs 20.

We've been moving up in rank pretty quickly. Thanks for all the votes! You can see our current Greenlight stats here. Not bad for 4 days. 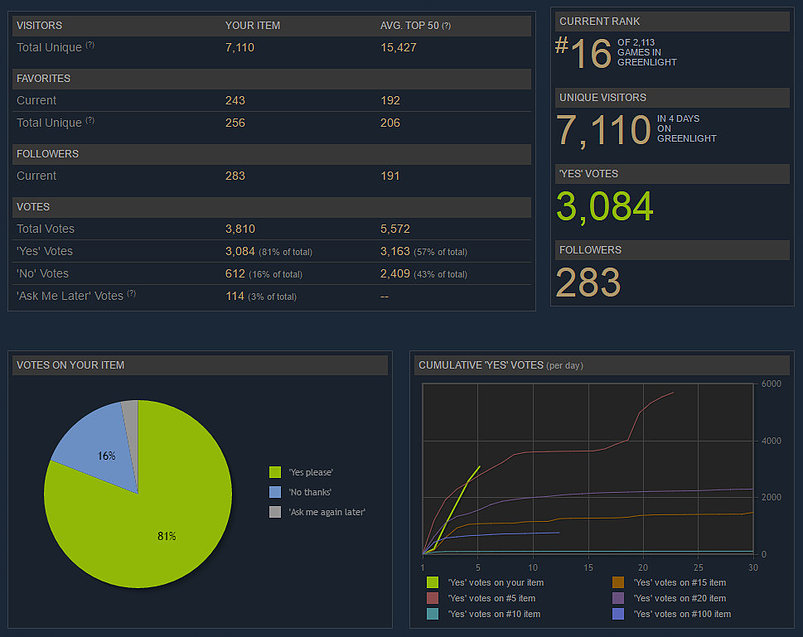 We've also been really excited about how involved the community has been:

Special mention goes out to nickleeb for helping us moderate our Discord server.

We are planning on updating the prototype in the coming weeks. Our goal is to fix critical bugs, tweak gameplay, and add a couple of fun new features each week. Unfortunately, until we get through Greenlight the builds will be delivered the old fashion way (downloading an installer). Bear with us!

After getting on Steam, we will continue to offer the combat prototype for free (for awhile anyways) so that we can further refine the mechanics and optimize our networking technology. The big difference is that our builds and login system will be managed through Steam, which should streamline the process quite a bit.

Here is some gameplay footage from the night of the day we went live.

This looks pretty sweet, like an MP version of running with rifles mixed with Commandos.
I'd buy it.