Welcome back! I’ve been rather quiet this past couple of weeks, as I was busy fulfilling my obligations towards my (now ex) employer and helping my team ship the game we had been working on for the past year, and every free second of my time after that went into Tower 57 development. As of today however I am officially unemployed (yikes!) which means both Cyangmou and myself are now fully dedicated to bringing out Tower 57 by the end of Q1 2016!

This means more regular updates of course, but also this week we will open up our Trello boards to Alpha backers and organize the coding sessions for backers who picked the Coding Guru tier. Furthermore we are refining the requirements for the News Stories and various Design rewards (statues, Easter eggs, etc.) and will progressively contact everyone involved so you can start designing your master piece ^_^

So what have we been up to all this time?

I will let Cyangmou update the art side in a separate post, but on the code front the following tasks / features were implemented (check out the forum thread for the entire log):

First things first, work has continued steadily on the editor, which has now reached version 1.1. This includes a lot of small fixes and changes to increase productivity, but also some very useful features that were missing such as a proper “fill bucket” :

which also works with auto-tiling :

We want as many things as possible in the game to be mod-able through the editor (after all we did reach the stretch goal ^_^), which means all the little things like particles, footprints, smoke effects, bullets, body parts, etc. which were previously “hardcoded” in the game needed to be re-created in the editor.

In other words we are creating the content for the game using the exact same tools and processes modders will have at their disposal : no cheating :) Right now all of the aforementioned content has been created, and we are ready to start creating level-specific content (props, enemies, spawners, etc.).

While this had been prototyped in the … well … prototype, the current systems needed some work to make this possible. Custom body parts and weapons can now be created through the editor and placed in the level or added to sales terminals with a few clicks, as well as equipped in-game.

Getting slightly technical for this one: textures / sprites in games are generally packed into “atlases”, big textures which contain multiple smaller textures, or various frames from an animation, etc. The reason for doing this is simply because “swapping textures”, i.e. telling your renderer “now stop using this texture for drawing, and instead use that one”, is very expensive in terms of performance. Using a texture atlas minimizes these texture swaps (e.g. instead of going through 4 32x32 textures, pack them into a single 64x64 texture, and access different parts of it to do your drawing).

However in the prototype, the system that builds characters our of body parts lacked support for offsets, meaning every part needed to be the size of the entire character, which resulted in a lot of “empty space” around each body part in the texture, which in turn resulted in a single character requiring 3 or 4 1024x1024 textures to be rendered (hope I didn't send any fellow programmers into shock...)

That is obviously *very bad* ^_^# It didn’t matter for the prototype as we needed to get it up and running quickly, and the performance hit - despite being real - is not noticeable for this particular case, but this was never intended to be the case in the final game obviously.

This is now fixed, and characters only require a single texture for all their body parts. 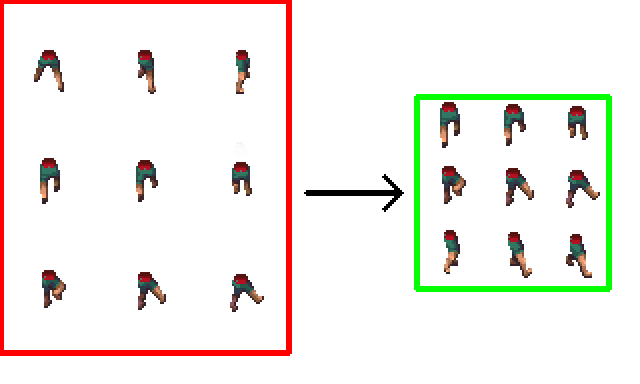 As I’m sure I’ve mentioned somewhere in the campaign (or maybe it was here on indieDB?) one of my favorite features of Alien Breed were the terminals, so that was definitely something I wanted to have in Tower 57.

Right now the basic menu flow and navigation are done, and the “news” section is functional : news stories can be created and added through the editor to any particular terminal, where they then appear in-game and can be browsed and read by players. This section will also host the news stories created by backers.

Players will also be able to purchase items through terminals, access security features such as disabling turrets and cameras or locking / unlocking doors, and as mentioned in the campaign they will also have a secret “debug mode”, which only the right character / tool can access, that will let you do some more cool stuff.

So that’s where we currently are, where are we headed then?

More regular updates : now that both of us are working full time on Tower 57, progress updates will become more common.

Music and sound effects : Raf has begun laying down the basics for the first in-game track, which will be used for …

The Alpha build : as mentioned during the campaign, Alpha backers will get access to our Alpha build. We are slightly behind schedule on the Alpha due to the editor work that was required by the stretch goal, but our goal is still to release it this month - we are just shifting from early December to late December ^_^#

The build will contain a test level, several weapons, enemies, collectibles, terminals, and some other “work in progress” features that will benefit from a larger testing pool. It will also contain lots of bugs, unpolished content, potential crashes, and will lack some of the cool features mentioned in the campaign. So … Alpha :)

Campaign rewards : we are still short of a few pixel avatars, and while the “Art sessions” with Cyangmou have already started, I couldn’t possibly schedule the “Code sessions” while still working a full-time job and spending nights on Tower 57 ^_^’

Now that this is settled, I will start contacting “Code session” backers to find the most suitable time for their reward :)

Additionally, the backer postcard is almost finalized, and we have started the design process on the physical box for the Collector’s Edition.

Content creation : with the editor in decent shape and the codebase fairly cleaned up, we are now ready to start producing content, building levels, creating boss encounters, etc. The next big steps in that direction will be : (in no particular order)

And of course a lot of level design and testing :)

I will post another update on December 15 to let everybody know how the Alpha is going.

Thanks! Feels pretty good to do what we love :)

Thank god this game got funded(glad I backed it), nice article man.

Well it only got funded thanks to backers like you! So thank *you* for your support :)

So you still are alive! Can't wait to be able to buy the game :)

We sure are! Never stopped working but "communication" actually takes a lot of time ^-^ (during the Kickstarter we had prepared a lot of content and were still basically doing just that all day!)

However now that we are both working full time on Tower, we can start posting regular updates again :)

A friend of mine wants to buy the game. Where and when can he purchase it?

We have been greenlit on Steam, so that will definitely be one of the places where he can buy it (we're still looking into other stores / distribution platforms).

We also have a Paypal on our website Pixwerk.net where he can still pledge for Kickstarter rewards (except the "sold out" ones - I actually plan to revamp that part of the site today to make it more clear).

Thank you very much for the answer. It helps alot. :)

Thanks for the hard work! I hope a Linux version is planned as well!
Looking forward to updates

yes a Linux version is absolutely planned as well :)

Awesome! Thank you for all the work you do!

Super nice work! I hope you get a lot of sales next year, for I am sure a buyer from what I just seen in this article!