A summary of the work done in the last two months. A custom editor for behaviour patterns, characters comment now on different events like entering combat and picking up things, a custom skin/hair color shader was added, dialogue gets interrupted by nearby enemies and can be resumed afterwards. Refactoring and a lot of other small things. World building through images continues at a steady pace. 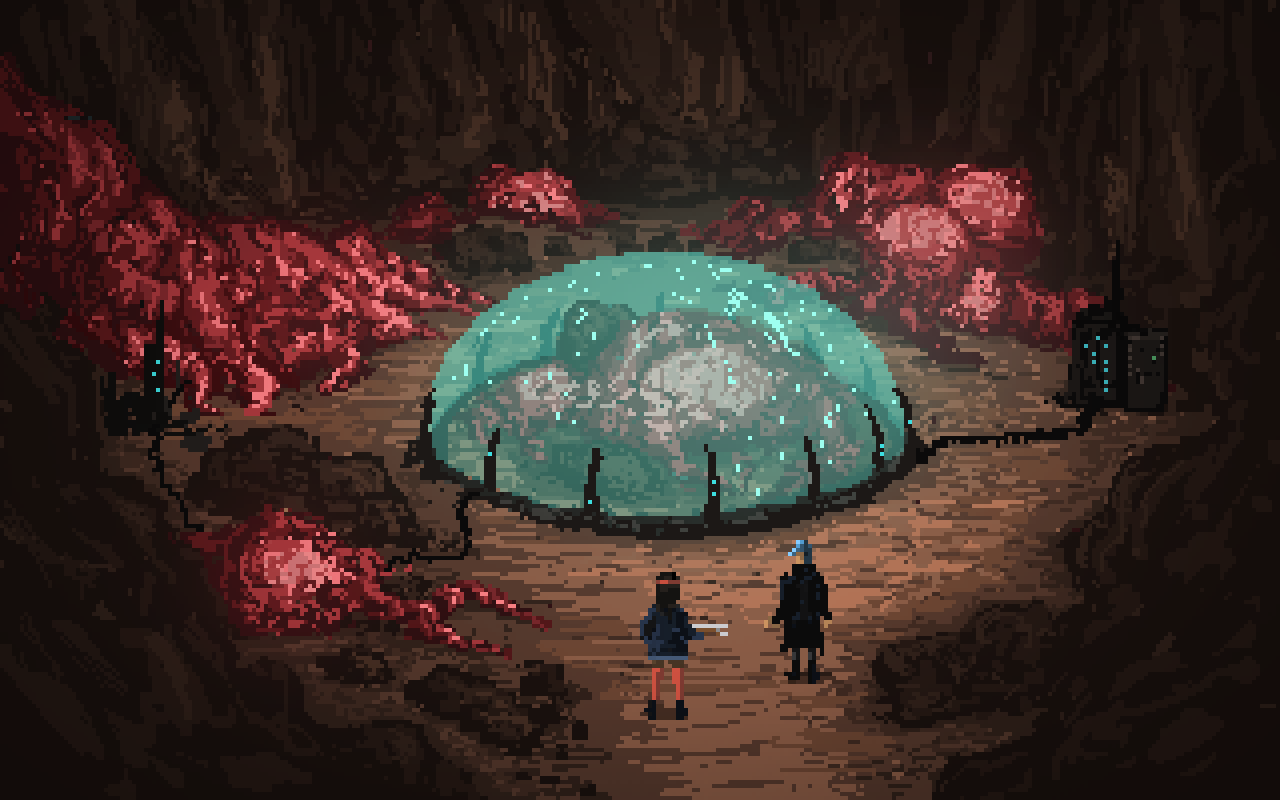 In the last development update I wrote that the next weeks would hopefully give opportunity to build some 'real' content for the prototype. Turns out there was a whole lot more coding needed on the base framework. And there still is.

While I managed to adapt the sequence editor that is already used for all dialogues and other logic constructs to be also usable for building behavior patterns for the NPCs and enemies, this needs a lot more finetuning, bugfixing and refactoring. The Aseprite Animation Importer I mentioned last time got some improvements and an official home on Github: Github.com 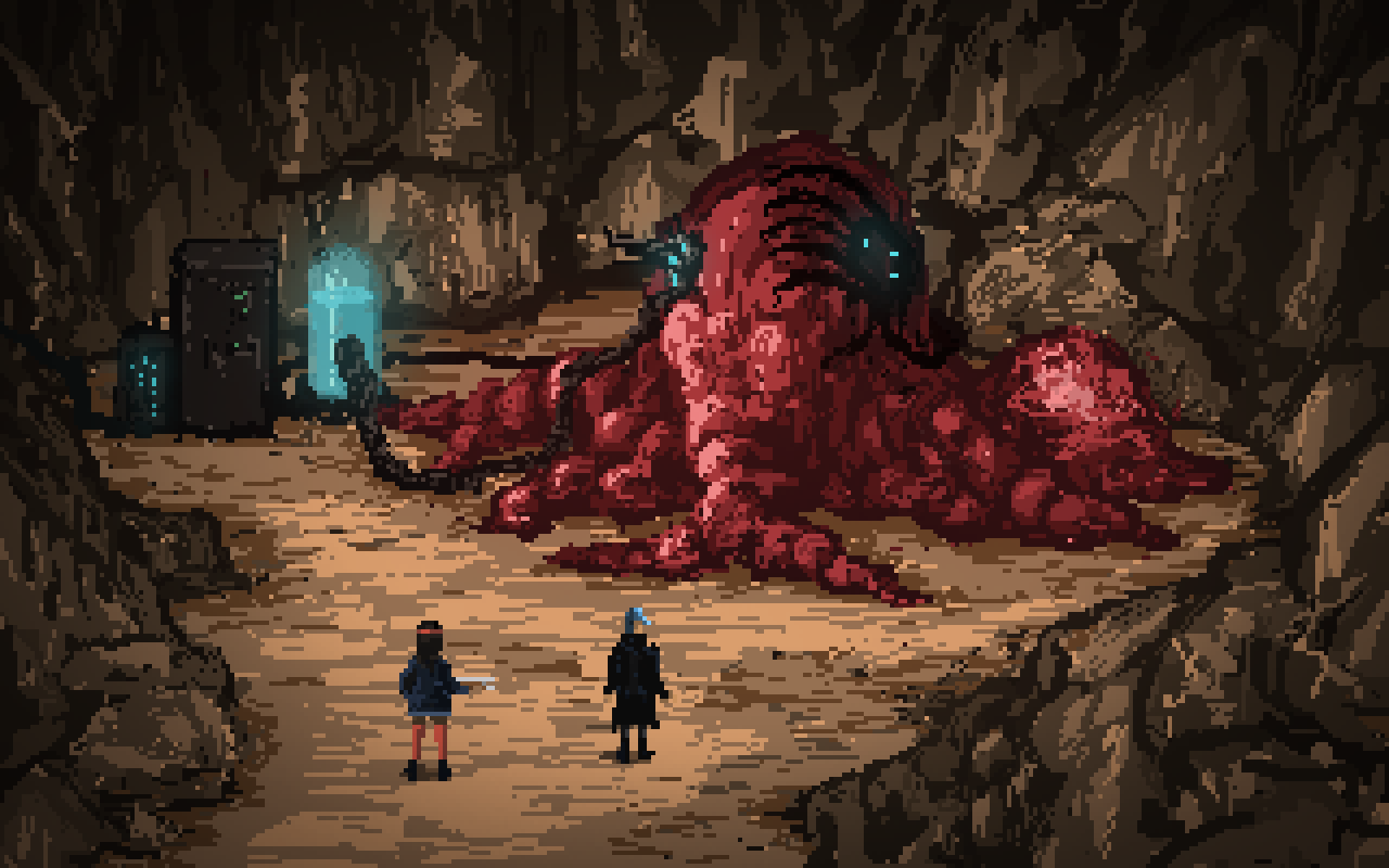 A good friend of me, Richard Baxter (@raxterbaxter), helped with adding a custom skin/hair color shader to the project. Makes the game instantly more colorful. The world will still have appropriate color schemes for the different parts and scenarios, but crowded areas like the Puke Bar can now be shown it all its glory and variety. (The image below, quality of characters etc. is just work in progress, of course.) 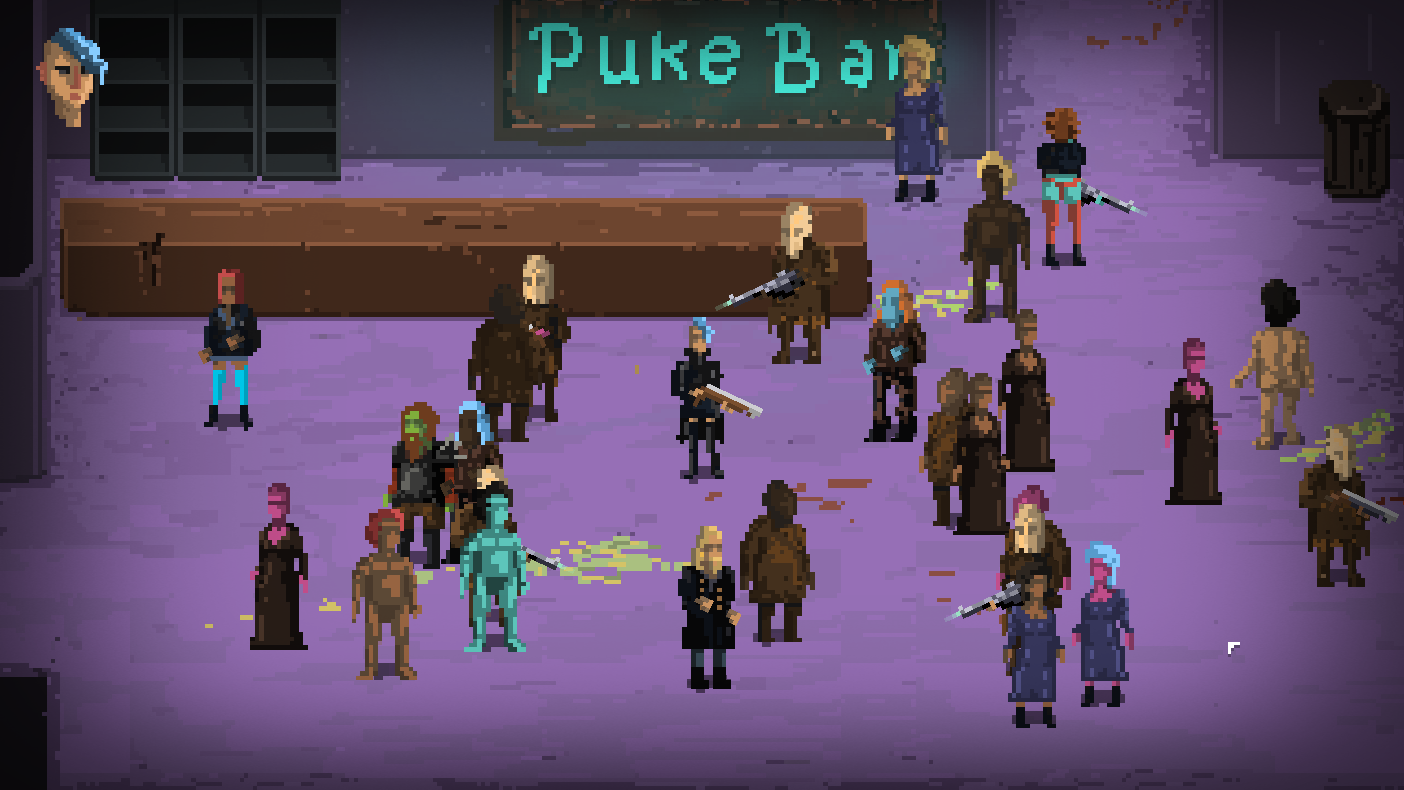 Handling of characters, dialogue etc. saw many small improvements. Characters have partings words now, comment when picking up items and entering combat etc. And finally, dialogue gets interrupted by nearby enemies and can be resumed afterwards.

World building continues mostly through images and writing some ideas down. There is an abstract of a story I have in mind, but I should work more on factions etc. before nailing it down. On a side note, I finished the Daily Art Streak, which means 365 artworks of any kind on a daily basis. I plan to continue with daily artworks because they were the foundation of last year's productivity and the beginning of Death Trash itself. You can find my latest images over here: Streak.club 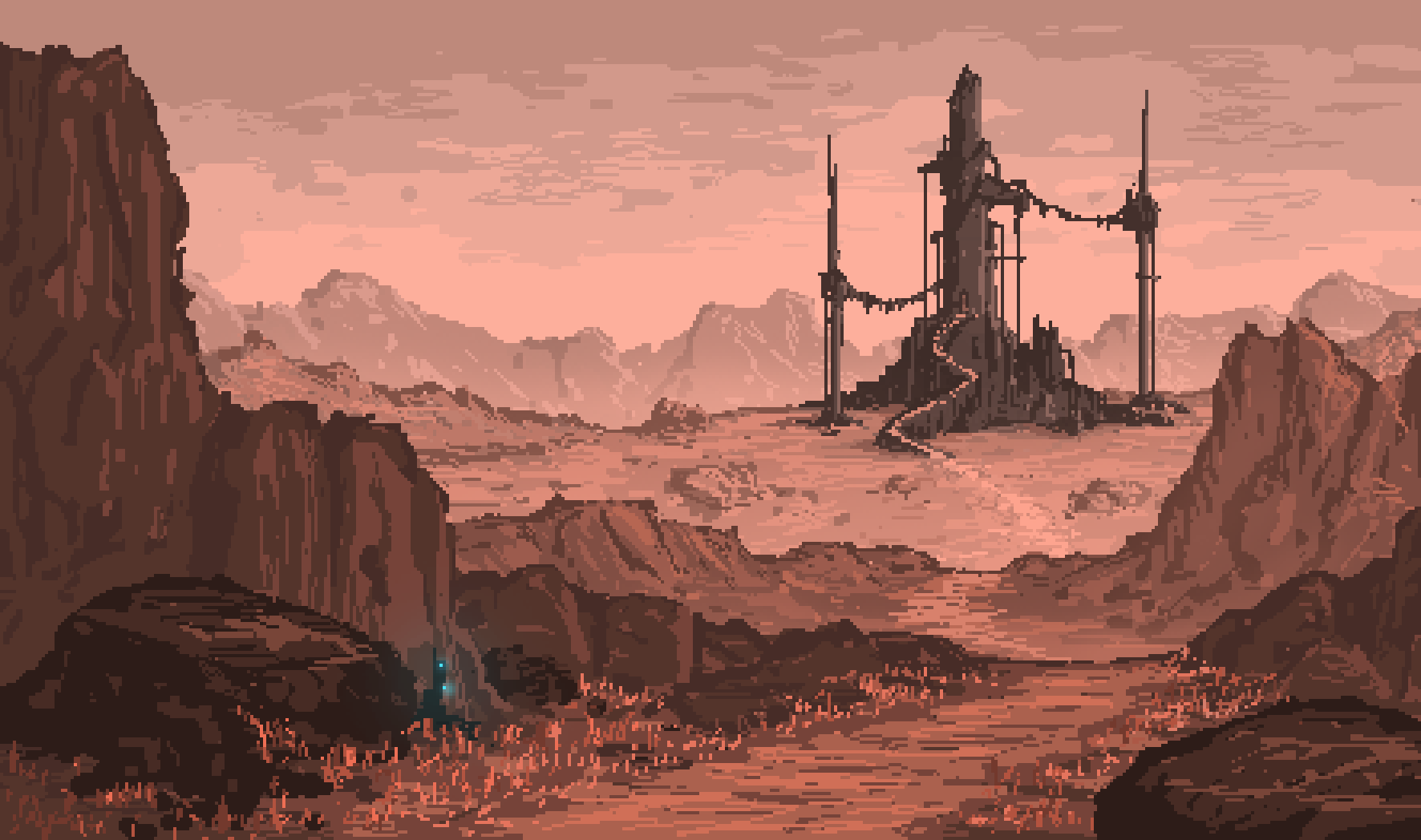 There was a lot of positive feedback from many people about the project. The concept and the artwork in general gets love and encouraging comments. What some of those people interested in the project wrote to me is that they would rather have a great experience, a full game, than a rushed one. I agree there. I would rather create a quality experience than getting a premature game out sooner. So while the possible release date of 2016 still stands for now, there's a good chance it will be changed to a later date when the scope of the project unfolds.

The next weeks I will continue with world design and more coding. This time hopefully a bit more on the gameplay side than 'just' framework and tools.

That's what it should be at this stage. :)

Lol. Well, it's early still. Can't build the hype and then say it's gonna be a long time now.

It's just coding the framework mostly nowadays. That immediate cancelling of dialogue and resuming after some circumstances feels so great compared to how stiff dialogue is handled traditionally, but that is better experienced than shown. I love how the world comes together, it's the best thing I've ever worked on, everything thrown in, grotesque ugly beasts you can talk to, the sometimes funny dialogues that let this border on tragicomedy, and still all coherent. That dirty pixel art style I found a bit by accident, but it let's my own imagination fly and I wouldn't do it any other way now even if I could.

I'm posting daily on Twitter, Twitter.com, but need more time for trailer or concise info on the website.

Anything you're interested in? What's your take on the roleplaying genre? You like it more as an adventure game or stats game?

Wow, you're definitely putting love on it! The pixel art is gorgeous, pretty unique.
I often prefer adventure oriented RPGs. Stats must be there (for rpg sake), but subtle, without so much centerism; otherwise, it put me out of the game universe. For example, love when stats evolve as an cause-effect of player's playstyle (if you want to be a mage, play like one), points aren't playing instead you.
I want to incarnate imaginative experiences, more than stat managing thingy, will say

I think we're on the same page there. The roleplaying elements should help bringing the world and experience to life, not be there for their own sake. I would even go so far as to call this a light-weight roleplaying game, but I have to be careful with the wording, because that often associates a "dumbed down" experience, which I think this is definitely not. The main "old game" influence is Ultima 7, which also had light systems, but everything interconnected so that it became a very immersive experience. For myself, at least.

Exactly. Playing a light-weight rpg the game feels flowing towards itself, confuse complexity with greatness is a mistake.
You're going with great ideals, the game could be epic stuff at the end!

Wow, ya now, I was idealizing a game that played just like this, but been stuck with how I was going to do the pixel art of something, and you nailed it. I will surely use your work as inspiration. Watching it!

Thanks for the comment. I still feel like I'm in the experimental stage, and there are some unresolved things like for example custom armor/headgear displayed on the character while maintaining a good size of different characters. And while I love the organic look of the levels I should break them more into pieces and write own level building tools so that they get easier to build and more interactive. Keep in touch when you pursue something like this. :)

I would advise to look at the real masters as I still feel like a hack. But if you're interested in this kind of pixel art, I begin streaming some in the next days: Twitch.tv - Crappy internet, but should be OK for art.

Its going along nicely; a game which "you are happy with" should be the priority. Looking forward to trash death !

That was always the goal. :) Make a game I would love to play and love to make.