*OWNERS OF ‘ORION: DINO BEATDOWN’ RECEIVE FREE.* The sequel to the adrenaline packed, class-based Dinosaur shooter is here. ‘ORION: Dino Horde’ triples the games content and revamps or rebuilds every mechanic and system from the original game. ‘ORION: Dino Horde’ puts you and your friends together in crazy game modes and expansiveness environments in which you must work or compete against one another to accomplish objectives and survive the devastating Dinosaur Horde. 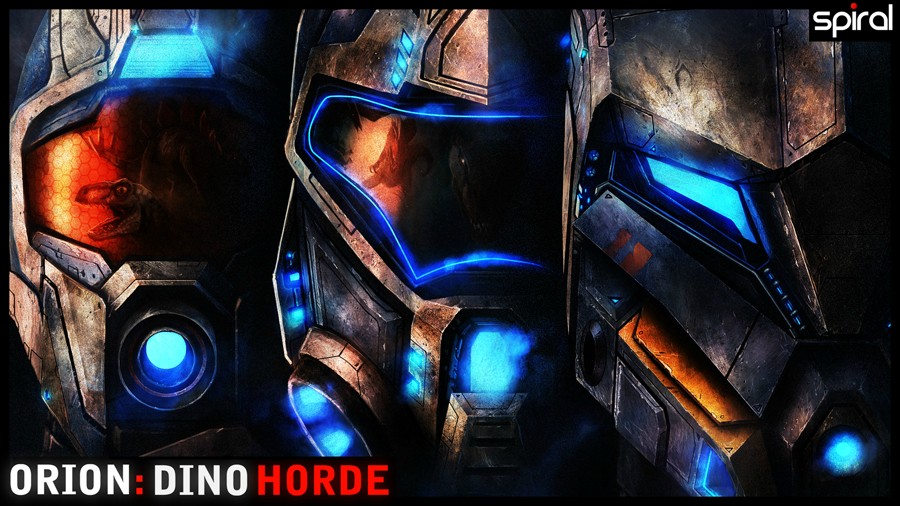 FREE COPY FOR ALL OWNERS OF ‘DINO BEATDOWN’

I want to get this out into the open immediately right off the bat. If you are an owner of ‘ORION: Dino Beatdown’ you will be receiving and upgrading to the ‘ORION: Dino Horde’’ (AKA Dino Beatdown 2) for FREE. This shouldn’t even be a question on anyone’s mind and we are extremely sorry about falling short on our first release and the problems you may have experienced.

‘ORION: Dino Horde’ is our gift and digital love letter to all that stood by and supported us during one of our hardest and most trying times. Thank you.

SO WHAT’S NEW?
The last 6 months were spent re-gutting everything and tripling the games content. We have made thousands of changes and improvements, revamped the game engine and incorporated community and developer feedback resulting in a game that is bursting at the seams.

Nothing was left untouched in the wake of this massive rebirth:

This is on top of other fundamental changes including:

CLOSING STATEMENTS
Over the next few days and weeks we will be rolling out additional information regarding the upcoming Beta, the official release date (Q1 2013), new trailers showcasing the new content and competitions to win cool things. Until them, enjoy the wealth of new media and feel free to interact with us below:

Considering your previous game was just as good as Big Rigs, I don't think you'll get many players unless you finally understood you shouldn't try to screw your customers over. Saying you "fell short" on your first release is a joke, you released an alpha and did nothing to improve the game except fixing the gamekilling bugs, and even decided to be an *** to the customers that complained it was a ripoff. Sorry but I'm not interested in any of your products anymore.

That's not the issue here. When you pay for a game, you expect a tested and polished game (unless you willingly pay for a beta, minecraft style), not something that looks like an alpha. It was advertised as a finished game and it's not what people got. It doesn't matter if a year later they finally made the game somewhat playable. When the Natural Selection 2 team made the game available on their website, they clearly advertised it as alpha/beta access. People -knew- what they were getting into, this is not what happened with Dino Beatdown. If they were in need of money to polish the game, they should have done it this way so it didn't look like a poor attempt at scamming just like WarZ did. I hope you now understand a little bit better why.

I know all about the bad PR with this game and the developer, but they are giving it out for free to all the owners of the original. That is free content for them. If you insist on saying something bad, please back it up with reasons. I'm sure you wouldn't want people calling you an Ignorant SOB for no reason, unless you deserved it and they stated why, then it is a much more accepted story.

Being an indie means we don't always have access to as much financing as one would like. I don't typically like to talk financials but I think it's important to realize that Dino Beatdown was developed on a budget of $45,000 USD across a period of 12 months spread across 25 developers (core & freelancers). Not very much!

Since the release of Dino Beatdown we have put out a variety of Updates and Patches to bring down some of the issues but that wasn't good enough. Not for our fans and not surely not for us. We needed to do something big and we needed to do it right.

That is why we are giving a free copy of the new 'ORION: Dino Horde' to EVERY owner of 'Dino Beatdown'.

We are very proud with this title and it's what we wish could have been much sooner. We've all worked very hard on this and have not only revamped or remade every system in the game but we have also added new systems to make everything easier or better, most notably connecting with friends. We've added Steam Lobbies, Automated Portforwarding, a brand new netcode, Quickmatch, Matchmaking and so much more.

We know we fell short with the first release but we have worked very hard to not only make it up to all of you, but also the game series and each one of us.

Don't worry guys it has hats! It will be ten times better! :D

Well I was pretty upset with the original release of Dino Beatdown, but that was only because I thought it would be a genuinely fun game. So if you guys can deliver that fun game that I thought I was gonna get the first time around, then I'd be more than happy to give Orion a second chance, good luck guys!

Dino Beatdown was/is fun.?i i enjoy just roaming around the maps
i dont see why people still bash on this game still.
and if anything why expect god tier gameplay from a game that was what $9.99

They bash the game because it was widely considered at best a sub par effort and at worst a completely broken game.

No one with a functioning brain is expecting Halo or Call of Duty for that price. Still, they don't get a free pass because they are indie or the price low. It allows people to overlook certain flaws, sure, but even then, not a free pass.

If you enjoy running around the maps and think you got your moneys worth. Great. I mean that. However, given that you can get games like Payday and Amnesia for a similar price from somewhat small teams, saying "It's $10 and indie!" doesn't hold up.

Well, I hope this release turns out better than the last one.
Although, I don't think there's any chance of it possibly going any worse.

Still, while I am rather looking forward to this, I can't say I'm going to hold my breath for anything incredible, given the game's less than satisfactory development history.

Good luck with your new release, i hope everything goes well this time.
But why the hell did you add hats?

Good news is that they are completely optional! All premium content has NO effect on gameplay or game mechanics. Even better is that any player can DISABLE all Spiral Store items on the client-side so they don't have to see other people using it.