Pick up a magic sword and kill and throw your enemies off a sacrificial pillar in the sky to ultimately become the "only one" in this retro style arena combat game for mobile devices. 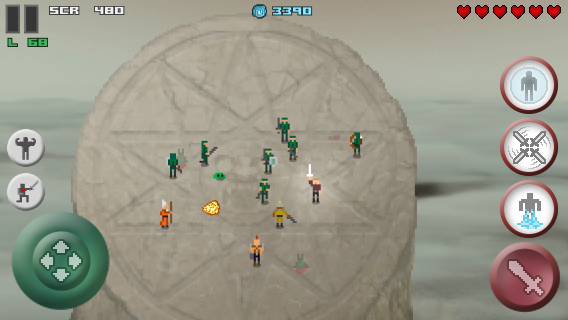 Only One is a game where you pick up a magic sword, declare yourself the only one and then fight off wave after wave of enemies to ultimately become the only one left standing. The game is essentially an endless arena combat game, with physics based objects and combat mechanics that allow a lot of back and forth sword play with a parrying mechanic. Attacking at the same time cancels the attack and pushes opponents away (sometimes to their demise). Although pushing an opponent off the edge is a faster way to kill and gets you more points, it also deprives you of the loot(health/xp/shield) that the enemy might have been carrying. Waves come in 10 culminating in a mini-boss, after which you catch a breather and continue. Dying takes you back to the last completed stage, but you always have the option of starting from the beginning. As you play you gain power(xp) which you can spend on lots of cool abilities like push(force push), freeze, whirlwind attacks, a shield bubble and a dart attack where you throw your sword, along with passive abilities and stat upgrades. Coincidentally this game is also made by only one developer, myself, and to me is kinda of a metaphor for the battle of making an indie title all by yourself. Constantly fighting to make the game a reality regardless of weather it will be successful or not and fighting the urge to quit. I made it primarily to vent off steam after my last project failed.

The game should be out in December, but if anyone wants a sneak peak, let me know! Beta testers wanted!

Here are some move videos featuring the
wizard
and
loot gnome
(a character inspired by golden axe and diablo 3's treasure goblin)
And this is how the game looked last year
the prototype took less than a month,it's insane how so many things have changed yet the gameplay is still the same
Comments

Only One Arcade
Related Engines