November 11 2013 Development update for Beyond Teatime. New boss has been added, along with the systems need for that to work. A couple of video previews, and also some shiny new graphical updates for a few of the areas.

Progress on Beyond Teatime continues. However, with real life responsibilities piling up, development has been a bit on the slow side. But, since the last update, I've almost completed the temple stage, begun work on bosses, and done a few graphically improvements here and there. 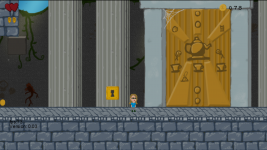 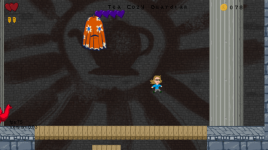 The temple area is the home of the Celestial Teapot, which Janice must recover in order to solve some mysterious goings on. It's also the home of the games first proper boss. The first boss will be an Angry Tea Cozy who guards the Celestial Teapot. He'll flap around a bit, and generally try an make you have a miserable day. I've been doing some work on getting the bosses working, but it's still in the early stages. They do get nice little health displays now, which feels like progress at least. The tea cozy also has a very basic attack pattern, but this should be updated soon when I have the time.

I've also got the the enemies dropping coins and health occasionally when they die now, which makes the game a bit less punishing when you lose some health. This week also saw me track down some odd bugs in the game, that were making doors randomly disappear, and locked gates open backwards. Thankfully the hardest part was updating an out of date plugin that I was using in Construct 2, and things are now running smoothly again.

Tightening up the graphics on level 3

Some fancy lighting has been added to the forest stage and it helps the whole place feel a bit more lively which is nice. It was pretty simple to implement, being an additive blended sprite, and doesn't impact performance much. So it's a good deal all around. 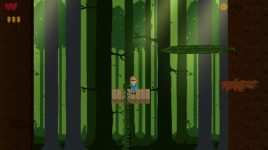 I've done graphical updates to a few other areas as well, and although a lot of the art still needs more work, the game is starting to look at least somewhat interesting. I've also finally updated the font used in some parts of the UI, so now the coin counter looks a bit less needlessly retro.Here's a quick preview video of the opening area of the game and the forest, and a video of the first stage of the temple.

Kettleton and the Forest - Indie DB

Thanks for reading, and if anyone has any suggestions or critiques please feel free to comment.