It’s been awhile since our last update and we have a lot of interesting news to share from the past 2 months. Firstly we’d like to thank everyone we met at EGX Rezzed for playing No Trace and signing up to our beta. It was great to finally see people play the game after months of development along with all the compliments and feedback we received which has all been taken into account to improve the game.

It’s been awhile since our last update and we have a lot of interesting news to share from the past 2 months.

Firstly we’d like to thank everyone we met at EGX Rezzed for playing No Trace and signing up to our beta. It was great to finally see people play the game after months of development along with all the compliments and feedback we received which has all been taken into account to improve the game. 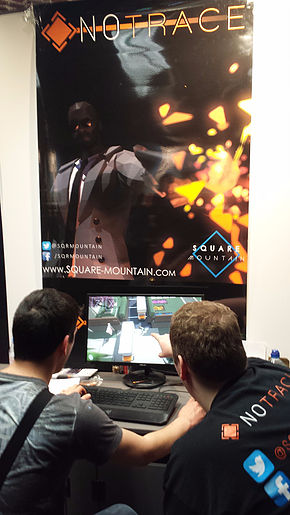 We found that often people would stand by our booth and look at the game, only a few would sit down and begin to play without any encouragement. We found that when we approached these people and asked them if they would like to play the game most of the time they would happily oblige. By doing this we had a lot more play testers than we would have had, so yeah a little encouragement goes a long way.

The event was a great opportunity to show off what we’ve been working on the past months and was a big confidence booster for the whole team.

Dare to be Digital

In other news, we managed to reach the finals of the Dare to be Digital competition in Dundee!

We had to present to a panel of industry professionals from companies such as Sony and Microsoft in the BAFTA house in London so it was a pretty nerve-racking experience to say the least, but the presentation went as smoothly as possible. We assigned a section of the presentation to each team member and then practiced and rehearsed the presentation to death the week before and prepared for any scenarios, or hiccups that might have occurred such as one of our videos not loading, and it really paid off, I guess practice really does make perfect.

We also tried to predict the kind of questions that would be asked at the end so we split the team in half, 1 group presenting and the other asking the questions. This removed us from our comfort zone, but was vital preparation and definitely helped a lot with being put on the spot and public speaking in general.

For the presentation itself we wanted to come across as professional as possible. We kept text to a minimum and used lots of images for key points to keep the presentation visually interesting. We covered all the criteria from marketing to development but specifically focused on explaining the game itself and core mechanics as well as our development pipeline. Using videos to help explain these points was a great way to give ourselves visual cues to help remember our scripts as well as giving the audience a visual point of interest which also definitely helped take the pressure off.

You can take a look at our presentation via this link for a guide if you’re thinking of entering Dare next year.

We also provided the panel with an app containing images, videos and extra information about the game they could browse during the presentation. We did this because we had a lot of content to show that would have made the presentation too long if it was on the slides. However the panel focused on the presentation rather than the app and only picked it up if we talking about something and mentioned that there was more information on the app.

The panel were very impressed with the polish of the game and mentioned that we hit all the criteria for the presentation, one panel member even questioned our need to enter Dare or whether we should be going directly to a publisher. They then asked us several questions such as if we would have multiplayer, if we were confident the levels will be completed on time and what our marketing strategy was. Feedback was focused on how the game would be received at protoplay as they said people would only have 2 or 3 minutes to play a game whereas ours requires anywhere from a few minutes to 30 minutes.

Development for the next levels of the game are well underway. The first is set in Palmeras Nightclub & Casino in Barcelona. The contract focuses around a double assassination (with optional objectives) during the Catalan Correfoc celebrations.

Here’s some of the promotional art for Palmeras Nightclub & Casino.

We’re also working on a Consulate office in a Manila skyscraper. You are tasked with infiltrating a locked down consulate and retrieving an encrypted file. The consulate level also come with optional objectives, such as eliminating the lead investigator.

We’ll have more to share on these levels in the coming weeks!

Over the last few weeks we have been discussing ways to make the player feel more like a highly trained assassin with deadly abilities. The first of these mechanics that we have prototyped is the Precision Take-Down.

We have spent the last week working on this mechanic which allows the player to use action points to activate an ability to enter slow-motion. This allows you to mark targets for the protagonist to eliminate in quick succession. You can find the work in progress video below.

When designing the mechanic we looked at similar stealth games, Hitman: Absolution and Splinter Cell: Conviction for ideas to make the player feel that they were a powerful trained assassin. We found that both games had a very similar ability known as ‘mark and execute’, as shown below. We thought that the ability would work really well in No Trace, especially since it is a top-down game, making it easier for players to target all enemies surrounding them. 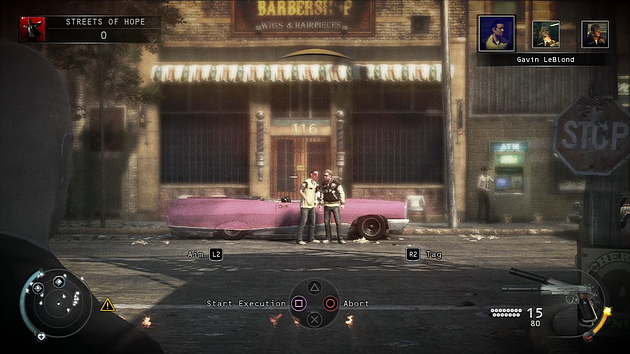 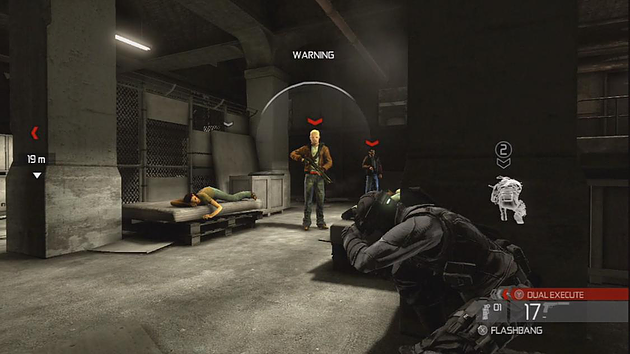 For the slow-motion effect we are using Chronos from the Unity asset store, which is also being used to set the time scale for individual objects when pausing the game, or entering inspection mode. Then raycasting from the mouse to detect enemy hitboxes, which when clicked, firstly checks if the enemy is in the player’s line of sight and instantiates a screen-space UI image which is set to the enemy’s head position. Doing so, depletes the player’s action points meter (which slowly regenerates while out of slow-motion). When exiting the marking mode, it ignore the player's input and manually aims the player’s character at each enemy, in the order they were marked, and fires the current weapon.

Finally, just in case you were wondering, we’ve decided to postpone our Greenlight application for now as we have a lot more features and levels we’d like to implement and share before we eventually push for Greenlight in the future.