Five substantial developments to town and city generation, and a massive wealth of smaller fixes and optimizations.

Posted by UltimaRatioRegum on Nov 23rd, 2015

Before I started work on anything important-NPC-related this week, I came to release that I had stacked up a rather worryingly massive list of small bugs, issues, errors to fix, and so forth, which I should really try to round off before developing new, and which I should test extensively to make sure everything is currently stable before I start adding the next section (getting important NPCs to respond to their schedules when spawned near the player, as well as when physically abstracted out). So this week has been a blitz of smaller jobs, and here’s a brief list of some of the changes, bug-fixes, and refinements, some of which are slightly more significant than others and might get slightly more mention in a later entry. Firstly, the actually new stuff, and then the fixes and improvements.

Firstly, in nations with the vassalage ideology, we will now find that towns no longer contain town halls, but instead contain manors, each of which belongs to a specific noble family which rules that town and its surrounding area. These are naturally different in shapes according to the nation, and have some pleasant gardens surrounding them akin to (but smaller than) the gardens in upper class districts. These have three floors just like their larger kin, and now all generate correctly across all three floors. Also, you’ll note that they have clear gardens but they can be a little tricky to see when the colour match – once I redo plant generation and ensure visual variation across the world, this should be much clearer (and the same goes for all other buildings with clear “garden” areas. Here are some examples with the exterior on the left, then the floors from highest (with bedroom) to lowest (for servants/slaves):

Next up, delegates now have identified houses in all possible map grids. What I mean this is that whether a delegate in a democratic nation represents a city district, or a town, or a monastery, or whatever, they will now always have somewhere appropriate to spawn and to live. These are generally houses that stand out from the rest, but are not ordinarily of a higher status than “middle-class” (of the sort shown below). In an upper-class district they get upper-class homes, but everywhere else special middle-class houses will spawn. The one shown below is in a city centre with the “cross” aesthetic preference, and three delegates from the district. I recognize this looks a little artificial, but I’m content with how they look here (given that delegates in various democratic nations in the real world are naturally given special statuses of various sorts). Similarly, everywhere else, houses of this size that stand out will belong to a delegate. 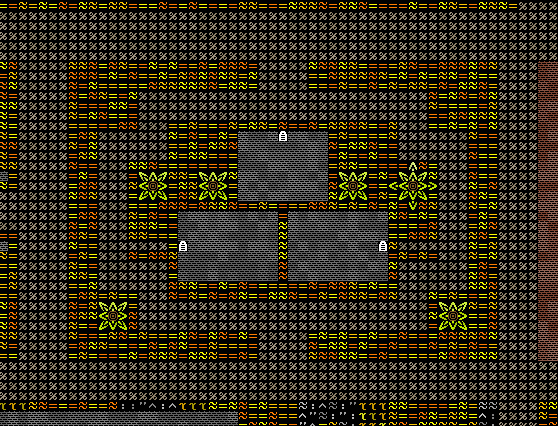 There are now a suitable number of priests in each cathedral, and they know that they sleep there, and so when we move onto getting NPCs to physically follow their abstract schedules (the next major task), they will be able to retreat to their quarters at night when appropriate. The number of priests in the cathedral varies per cathedral, but they will always be found moving around the space and talking to others, or worshiping at the altars, or working at a table, and so forth.

Town halls also now have an interior, and some quarters where the mayor lives (I decided to combine those two roles into one), but as above, in vassalage-y nations there is no town hall and towns are instead ruled by a noble from their manor. Here are a couple of town hall interiors (they are all this kind of “star” shape, since I try to make every building a noteworthy and distinctive shape, and those happen to be a shape I haven’t really used anywhere else yet, and certainly not in towns). The rooms on the ground floors with tables will be where town records spawn once I’ve implemented books/scrolls/tablets/etc. 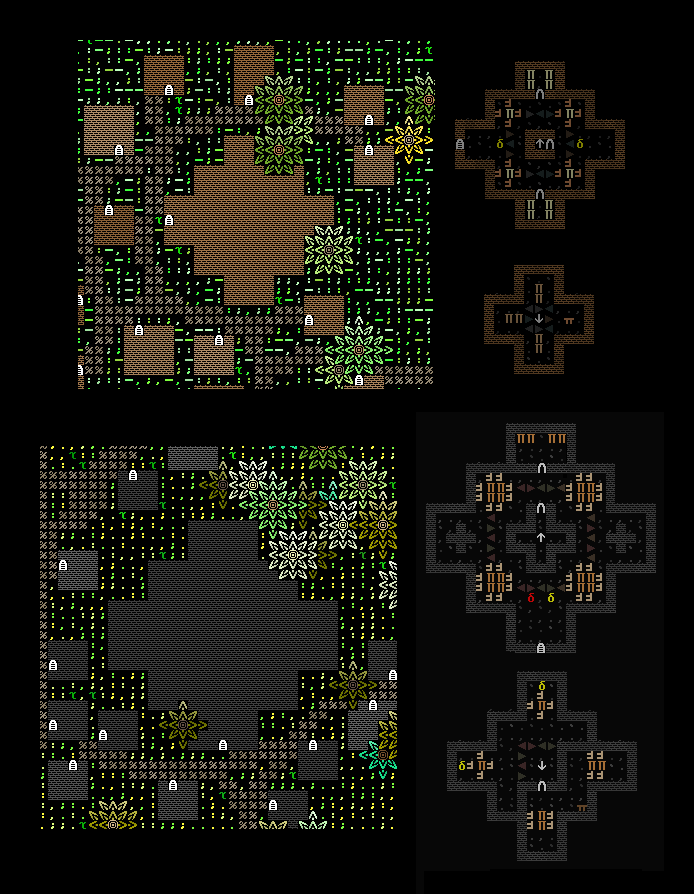 Training areas now spawn in city centre districts in nations which enjoy gladiatorial combat. This will be the standard “work location” for gladiators on days when there are no fights, and you’ll be able to watch them sparring once weapons get introduced. For the time being I’ll give them the same “meandering” code as NPCs get when they look around memorials or art galleries and the like. Doesn’t look super-exciting right now, I realize, but once it has gladiators training (and maybe things like training dummies?) it’ll be rather more noticeable. The shape of the layout is, of course, determined by the nation’s aesthetic preferences. 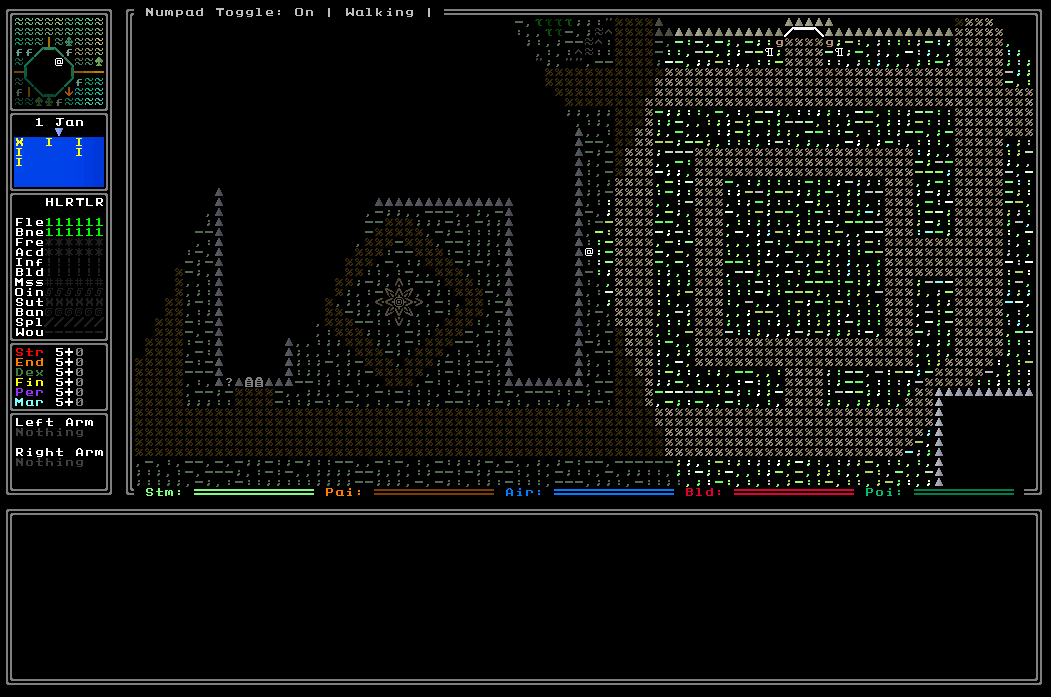 - Prevented market districts from spawning too many shops in nations with “forced shops” in their ideological preferences.
- Dealt with a bunch of issues involving sand, snow and ice terrain behaving oddly when certain structures are placed on them (since these are handled differently to “ordinary” land).
- Dealt with an interesting scheduling bug where monks really, really hated tending their vegetable gardens.
- Fixed an issue where guards for inside and outside mints became confused about their roles.
- Increased the colour contrast on prayer mats for certain religions to make them less painful to look at.
- Fixed a weird bug with segments being taken out of corner towers in certain districts.
- Fixed an issue with important guards (which is to say, all guards) not being corrected abstracted and returned when the player leaves their map grid.
- Random crowd NPCs will no longer go into a house that has been assigned as somebody’s home.
- Jailers, Mercenaries, Prisoners, Merchants, Innkeeps and other classes of NPC who generally wander around a given room/floor for most of their ordinary day no longer make a mad sprint for the exit the moment they spawn.
- The roads surrounding barracks, military bases and mansions do not override existing walls when spawned.
- Crowd NPCs in towns with foreign communities now only go into the appropriate houses from their culture when returning “home”, and NPCs from the other civilization present actually spawn and go about their day.
- Jail offices now contain, y’know… office stuff. Chairs and so forth.
- Roads in snow/ice/desert towns no longer sometimes appear at a strangely low z level.
- Towns in snow/ice with at least one edge of water no longer have edges that look strange and flat.
- The inside of monasteries always resembles the exterior, and are therefore no longer sometimes somewhat akin to the TARDIS.
- Houses in middle-class districts can no longer spawn, somewhat incongruously, in the middle of parks.
- Fortresses can no longer spawn on adjacent tiles to towns (I’ve only ever seen this ONCE, and should have been impossible already, but it is now doubly impossible).
- Fountains no longer look like delegates when they’re downhill. No, I don’t understand either.
- The quantum scheduling system no longer causes a crash at map edges.
- Fixed an issue that encouraged NPCs to run in circles in a particular form of middle-class district.
- The sex of NPCs is now chosen before they ever spawn – this allows them to spawn according to cultural preferences (only female priests, only male rulers, either in army, etc) and for people to talk about them with correct pronouns.
- Ensured that smaller upper class houses work again – since implementing something that assigns houses directly to families they had been riddled with bugs.
- Leaves are no longer made out water when they hang over tiles of water…

At this point I’d say we’re at around… 80% completion on *everything* to do with NPCs and their AI behaviours (for now). We have crowds spawning, crowds pathfinding in every possible area, crowd demographics for nations and cultures, crowds entering/leaving buildings appropriately, important NPCs being spawned, important NPCs being tracked in the abstract, important NPCs being spawned when the player steps onto the appropriate map grid. All that remains is 1) to get important NPCs, when spawned, acting the same way they do when abstracted out, and therefore moving correctly around the physical maps, and 2) to add in the remaining important NPCs who don’t currently spawn (executioners, chiefs, and the like). Then I need to finish off the remaining clothing types (some of the lower-class clothing, and then all the clothing for nomadic/tribal nations), and finish adding in all the new ideological variation between nations, and then it will be onto castle generation and the conversation system! It’s hard to say what order this will be done in. Finishing off scheduled NPC movement is a very technical task and I like to leave myself clear periods of a day or two to work on that kind of thing – but I’m full-time employed now and I’m busy next weekend and the weekend after. As such, I’m probably going to focus on Everything Else for the next fortnight or so, and then come back to NPC scheduling to finish off the calendar year with. Therefore, I would guess that next week we’ll have my continued purging of the bugs and glitches I’ve stacked up (since only around 50% of the issues on the list have been resolved this week) and work on clothes, castles, or both. See you all then!