Wildfire Games, an international group of volunteer game developers, proudly announces the release of 0 A.D. Alpha 24: “Xšayāršā” (pronounced: Khsha-ya-ṛsha), the twenty-fourth alpha version of 0 A.D., a free, open-source real-time strategy game of ancient warfare. The release is named after Xerxes the Great, ruler of the  Achaemenid Empire from 485 to 465 BC.

Wildfire Games, an international group of volunteer game developers, proudly announces the release of 0 A.D. Alpha 24: “Xšayāršā” (pronounced: Khsha-ya-ṛsha), the twenty-fourth alpha version of 0 A.D., a free, open-source real-time strategy game of ancient warfare. The release is named after Xerxes the Great, ruler of the Achaemenid Empire from 485 to 465 BC.q

Download and installation instructions are available for Windows, Linux and macOS.

0 A.D. is free software. This means you are free to download, redistribute, modify and contribute to the application under the same licences: GNU Public Licence version 2 (GPL v2) for code and Creative Commons Attribution Share-Alike 3.0 (CC-BY-SA 3.0) for artwork.

Although you might find some people selling copies of 0 A.D., either over the internet or on physical media, you will always have the option to download 0 A.D. completely gratis, directly from the developers. No “freemium” model, no in-game advertising, no catch.

With the help of several of the top-ranked players in the A23 lobby, hundreds of balance tweaks have been made in the past year and almost all units and structures have been adjusted. The end result is a sleeker, more balanced gameplay experience in A24: 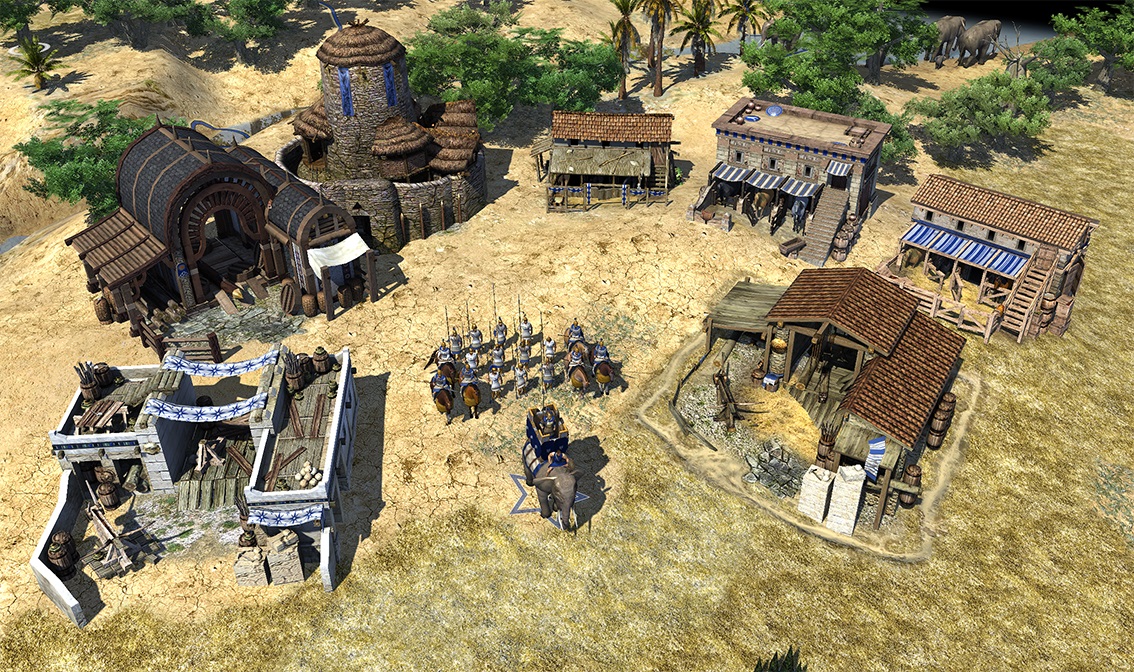 City-building fans will enjoy this new option: you can now easily place buildings next to each other with snapping!

This functionality can be toggled with Ctrl, and you can choose whether you want it on or off by default, so it is, as always, up to you.

This release introduces anti-aliasing in the renderer: you can choose between no anti-aliasing, FXAA and various levels of MSAA, if you have the GPU power for it. A Contrast Adaptive Sharpening filter has also been added to the engine. For using these options we recommend your system supportsOpenGL 3.3 or later versions.

The ocean shader also received some tweaks, most importantly near the edges of the map, which now looks better.

This new in-game editor will make it much more accessible to change your hotkeys. Further, the hotkeys have been reworked to use scancodes, so the default hotkeys will be compatible with any keyboard layout! 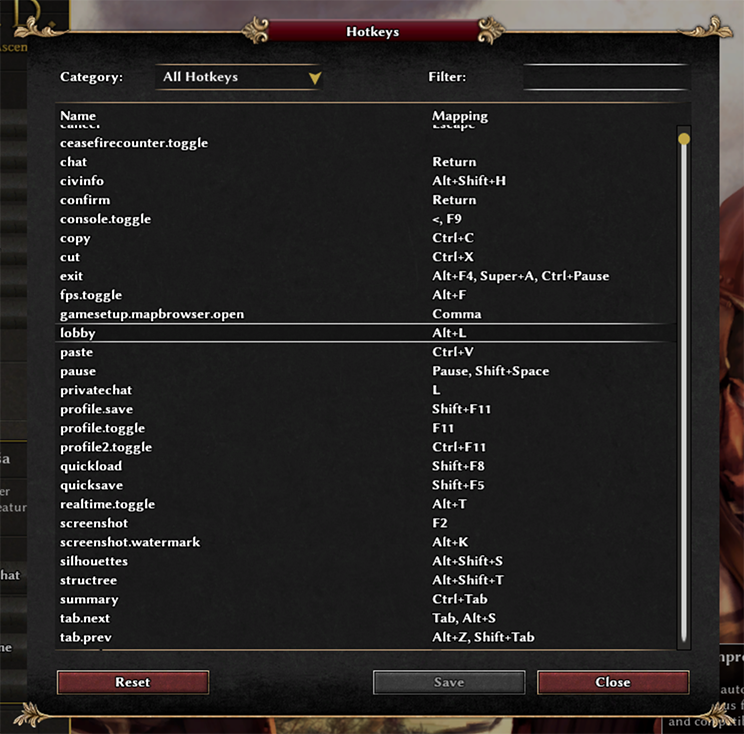 Alpha 24 gives you new tools to work with formations: you can now pick a default formation to put your units in when given “Walk” and “Patrol” orders, and you can also choose to automatically disband formations when your units are ordered to Attack or Gather, etc.

Modders will like this one: you can now give status effects to your units, changing their stats in various ways. Stat modifiers can also be applied directly by triggers and in other ways, without having to hack around auras or technologies. 0 A.D. does not yet use them much, but this really gives you more power to make new custom maps and custom game-modes without having to create a lot of new templates, e.g., tower defence mods. 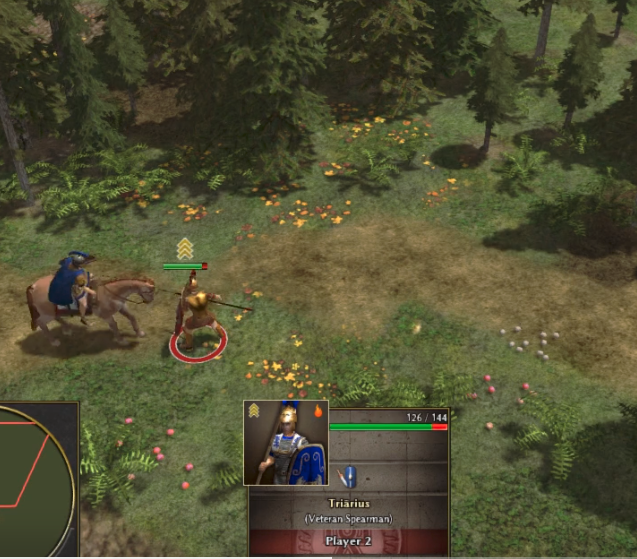 Despite our best efforts, the game can still lag when there are a lot of units on the map. World Pop (Population) gives you one way to still have epic fights but good performance: choose a maximum total pop which. When one player is defeated, their share is distributed among the remaining players. Start a 4v4 with 150 pop-limit each, and the last 2 players can have 600 pop between them! Will you keep that poor enemy alive to hinder your opponent or can you use the extra population capacity?

This was requested a lot: you can now host password-protected games in the lobby! This makes it easy to play with your friends without having to find your external IP or setting up your router. Further, we’ve also improved your security by hiding the host IP until players have successfully joined your game, which drastically reduces the risk of DDOS by hostile players.

We strive to make the game more accessible and easier to use, and this release is no different:

For those looking for an alternate way of picking a map to play, Alpha 24 introduces the "Map Browser". Accessible from a button in the Match Setup interface, users can navigate through maps a little more intuitively than using a dropdown menu. 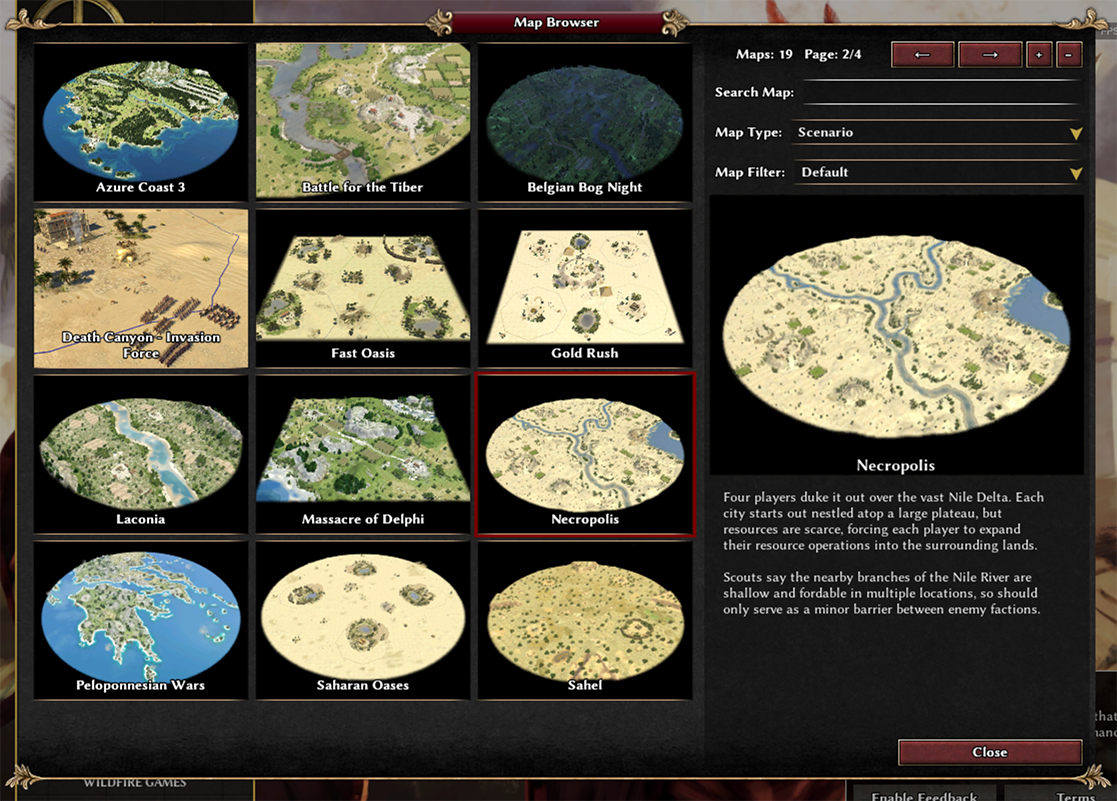 Those who play the “Relic Capture” gamemode will no doubt be aware that the "relics" in question are Catafalques - reliquaries of dead heroes encapsulated within wheeled carts - and each of these has a small selection of beneficial auras. Alpha 24 introduces a "Catafalque Overview" screen, accessible from the "Learn to Play" submenu of the Main Menu, which makes it easy to learn their different characteristics. 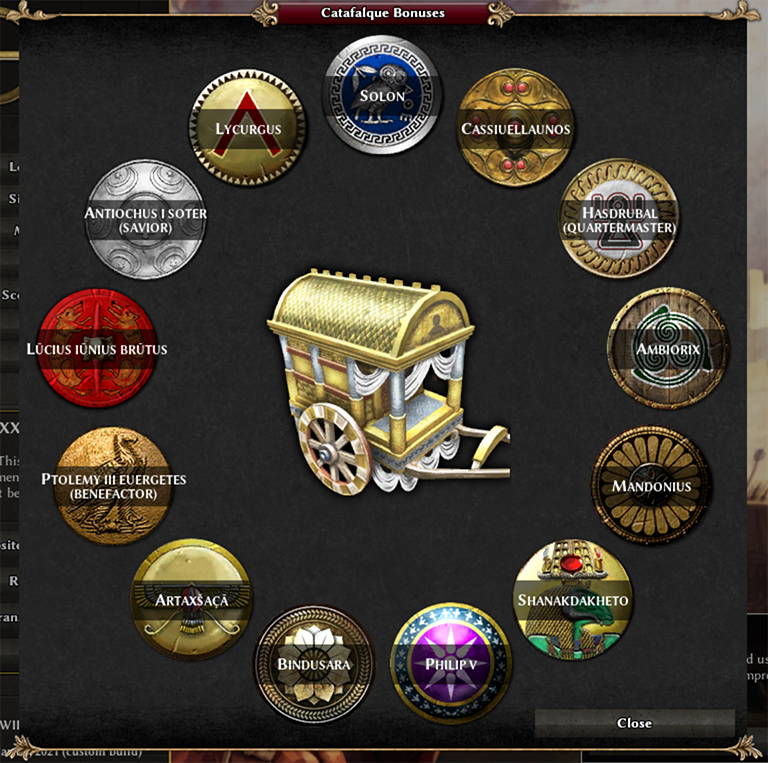 The long-existing “Civilization Overview” screen has had some background improvements. Because most of the information is now pulled from the game files, it is now considerably more accurate than in previous Alphas.

There have been a few added capabilities to the game setup, such as choosing the landscape of random maps when several are available, and a more obvious indicator that the game will be Rated for Online Play.

This alpha improves on many small things: 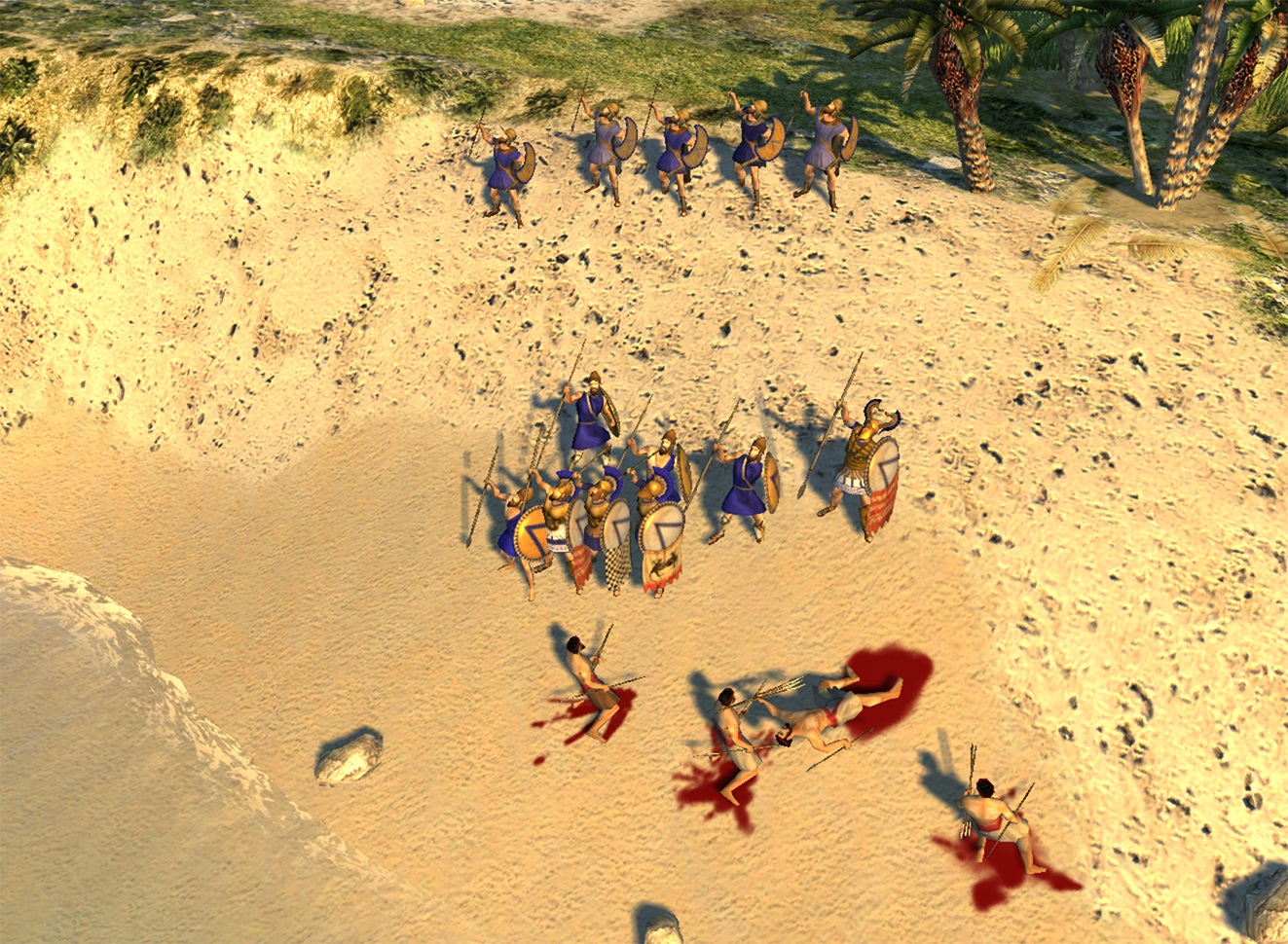 Reinforcement learning is a Machine Learning technique that can be used to train AI to play games, and now 0 A.D. has one. We’re excited about this new possibility, because the extensive and easy moddability of the game means you could set up many kinds of complex environments and RL agents without having to recode everything from scratch.

We invite any AI developers, researchers or anybody else to help with our AI. More could be found in here (https://trac.wildfiregames.com/wiki/GettingStartedReinforcementLearning)

The new art developments are too numerous to list individually, and include reworked meshes, animations (including new idle, attack, defence and gather animations), textures and materials for a large number of units, as well as new models, including new horse models, textures and animations, new shield models and designs, new helmet models and variants, especially for the Romans, Gauls, Britons and Greek civs. Many new and improved unit textures, weapons and props for a number of civs including, among others, the Persians, Iberians and Carthaginians.

The Ptolemies now have a few more historically accurate Hellenized building models and the Britons have a new blacksmith, while the Gauls have a new, more historically accurate wonder and an assembly building that can train trumpeters to intimidate the enemy. New scaffolding, dirt and decal textures for buildings have been added. Many of the ships in-game have been entirely remodeled from the ground up. Siege artillery has been completely remodeled as well, including considerably improved animations.

There is also a lot of new and improved flora, including trees, bushes and grasses. We have new cliffs, new particle actors for snow and clouds and a few new terrain textures, as well as new sounds, and voices. There is a brand new welcome screen, and there are also many improved icons, and unit portraits for the GUI. This is in addition to a myriad of smaller fixes, corrections and optimizations. 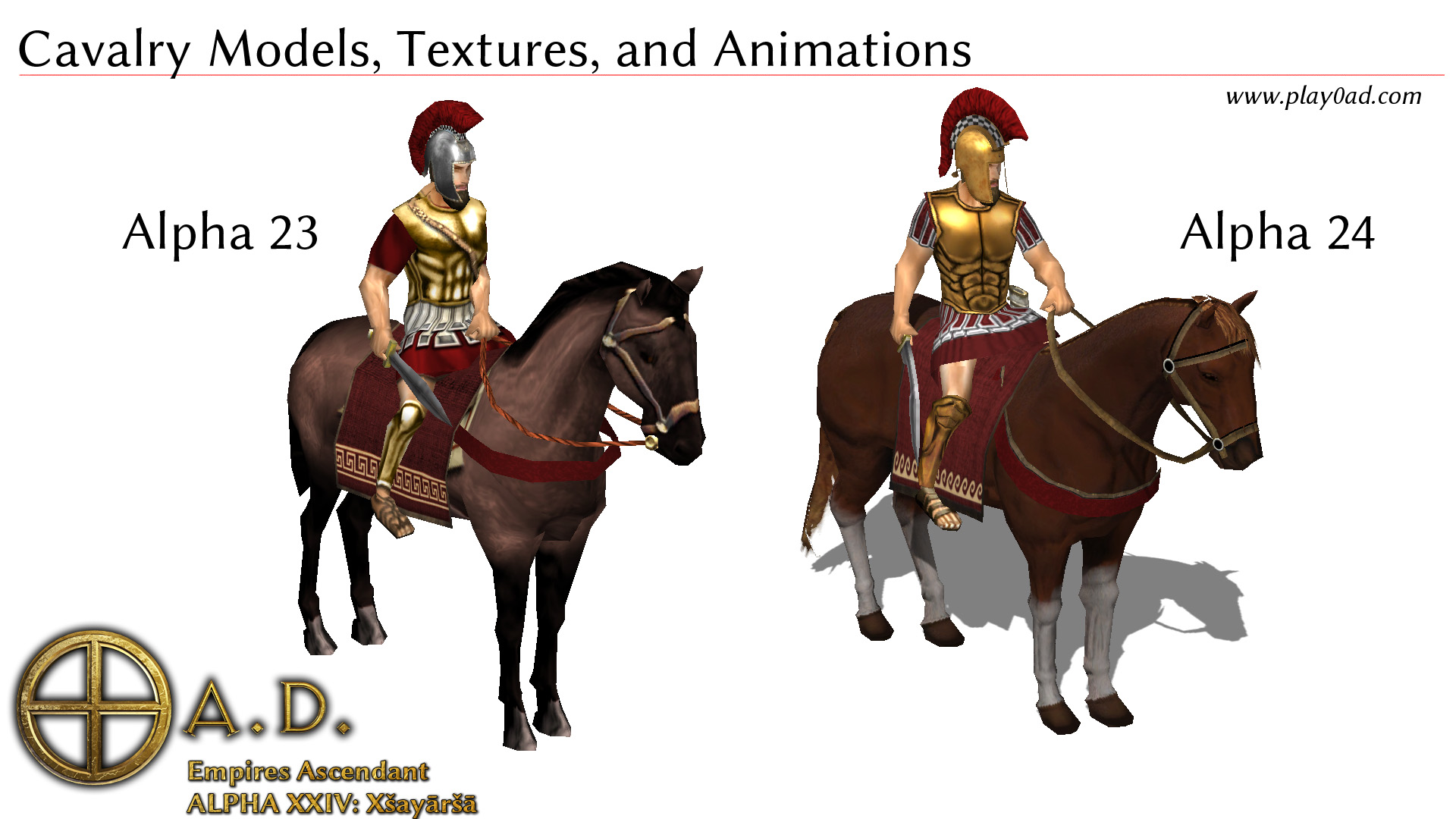 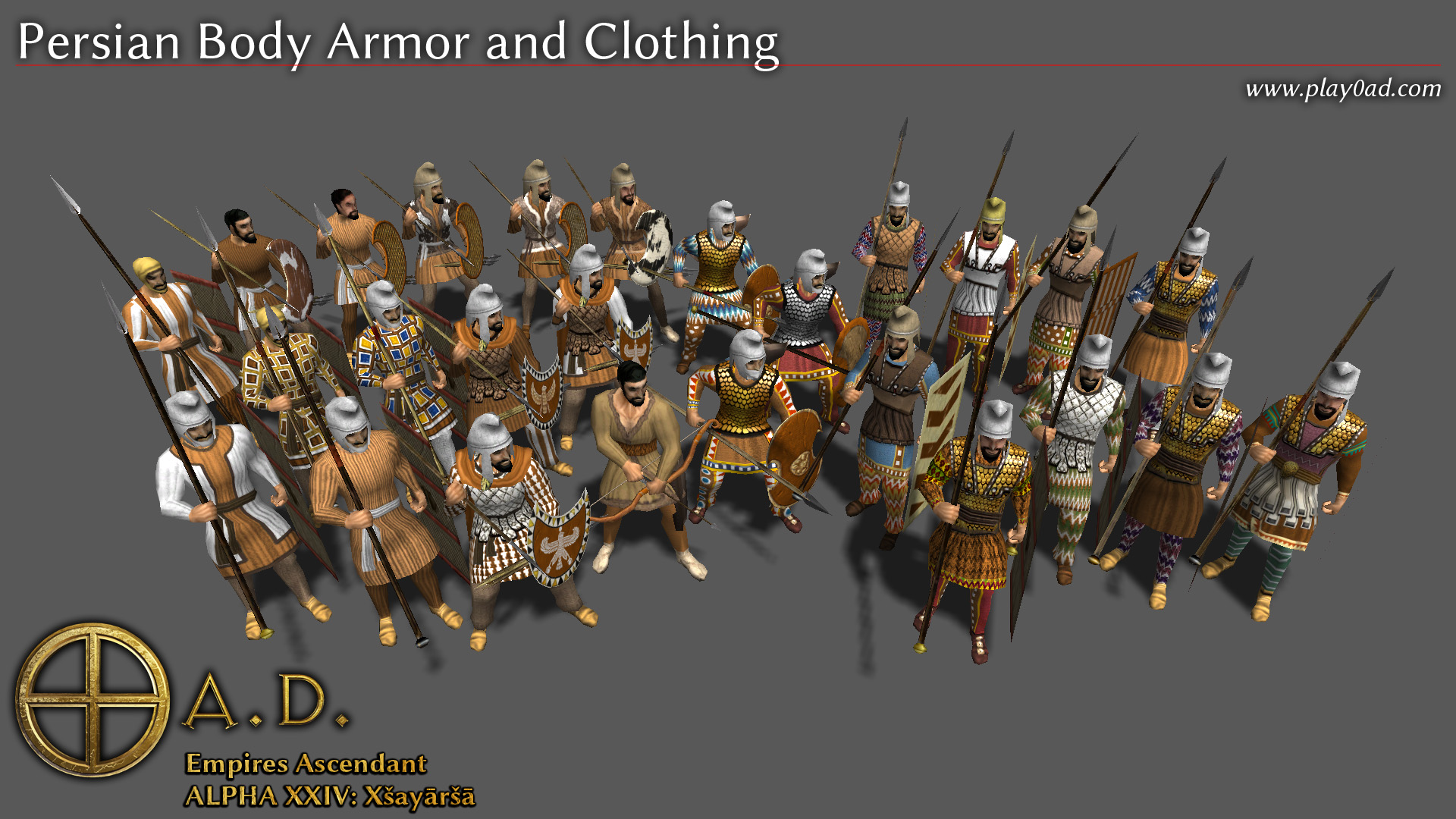 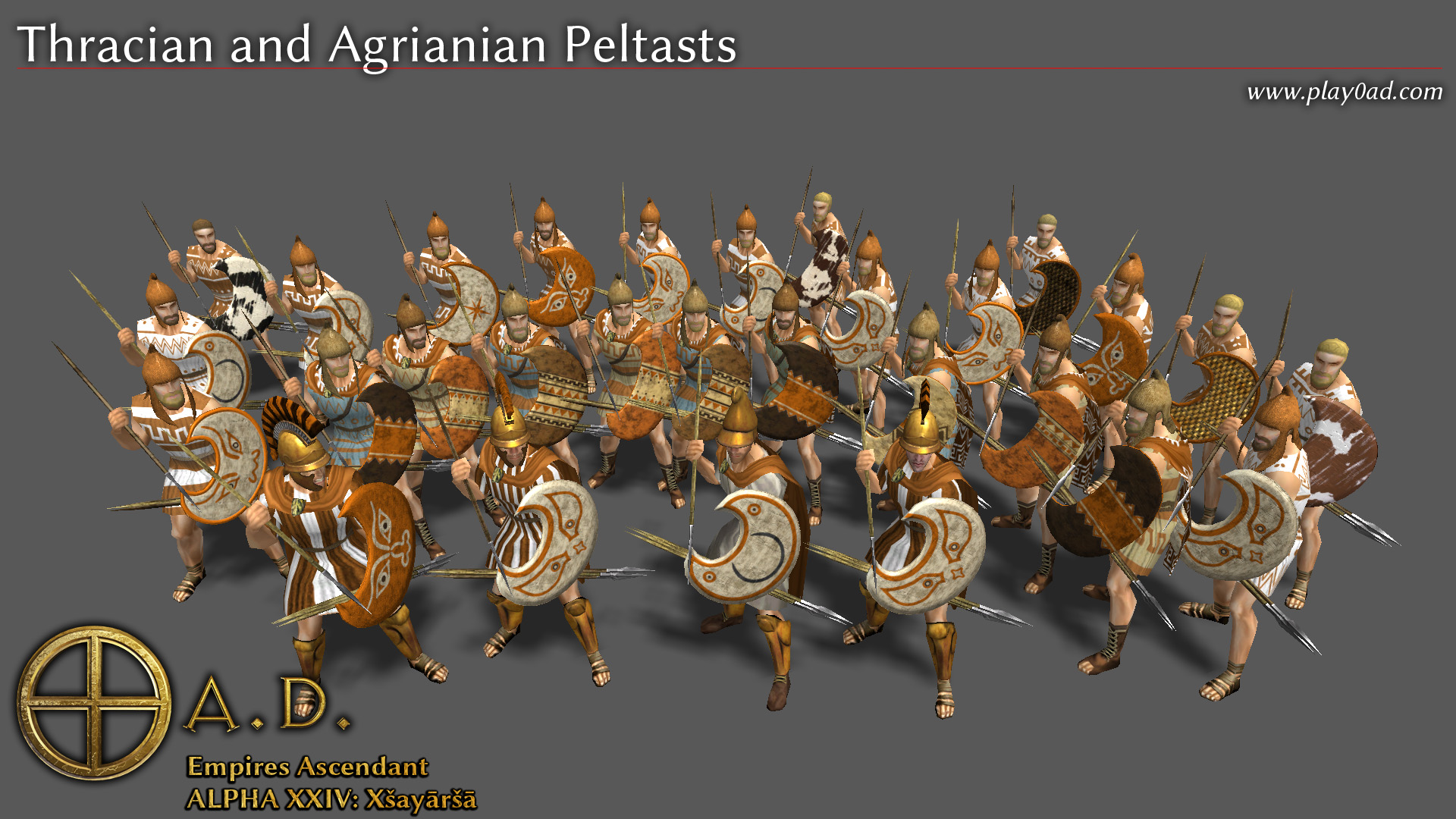 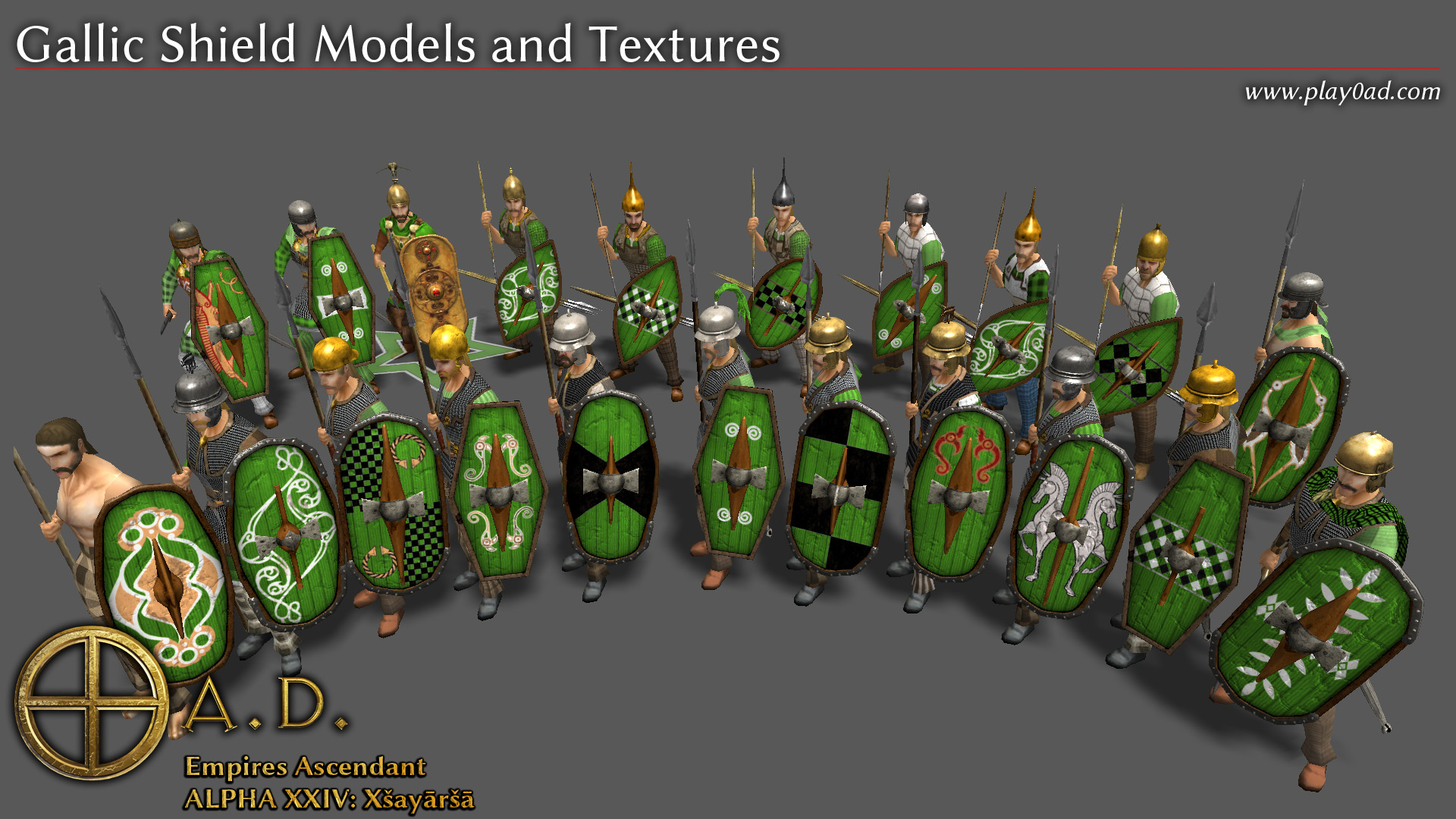 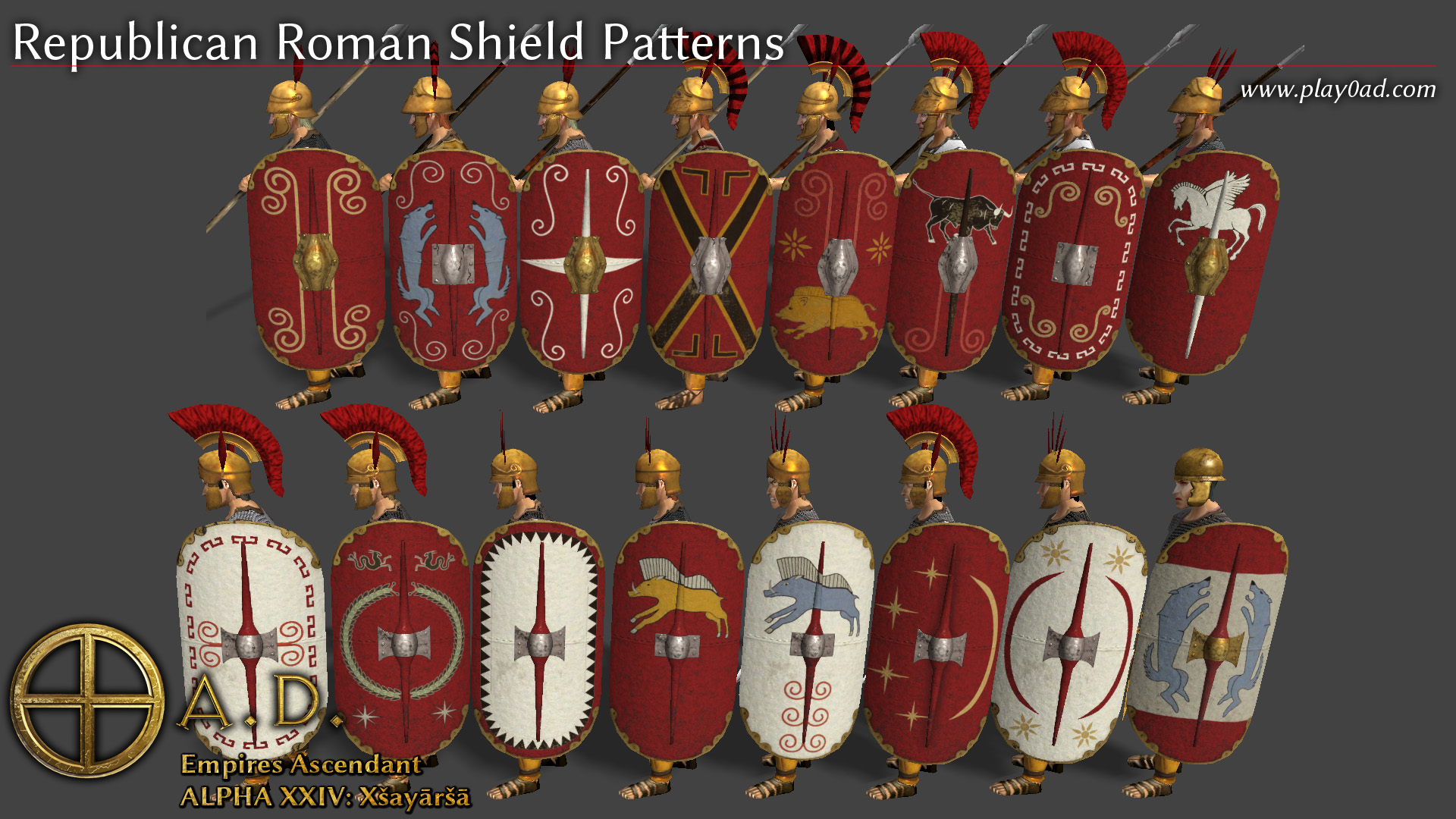 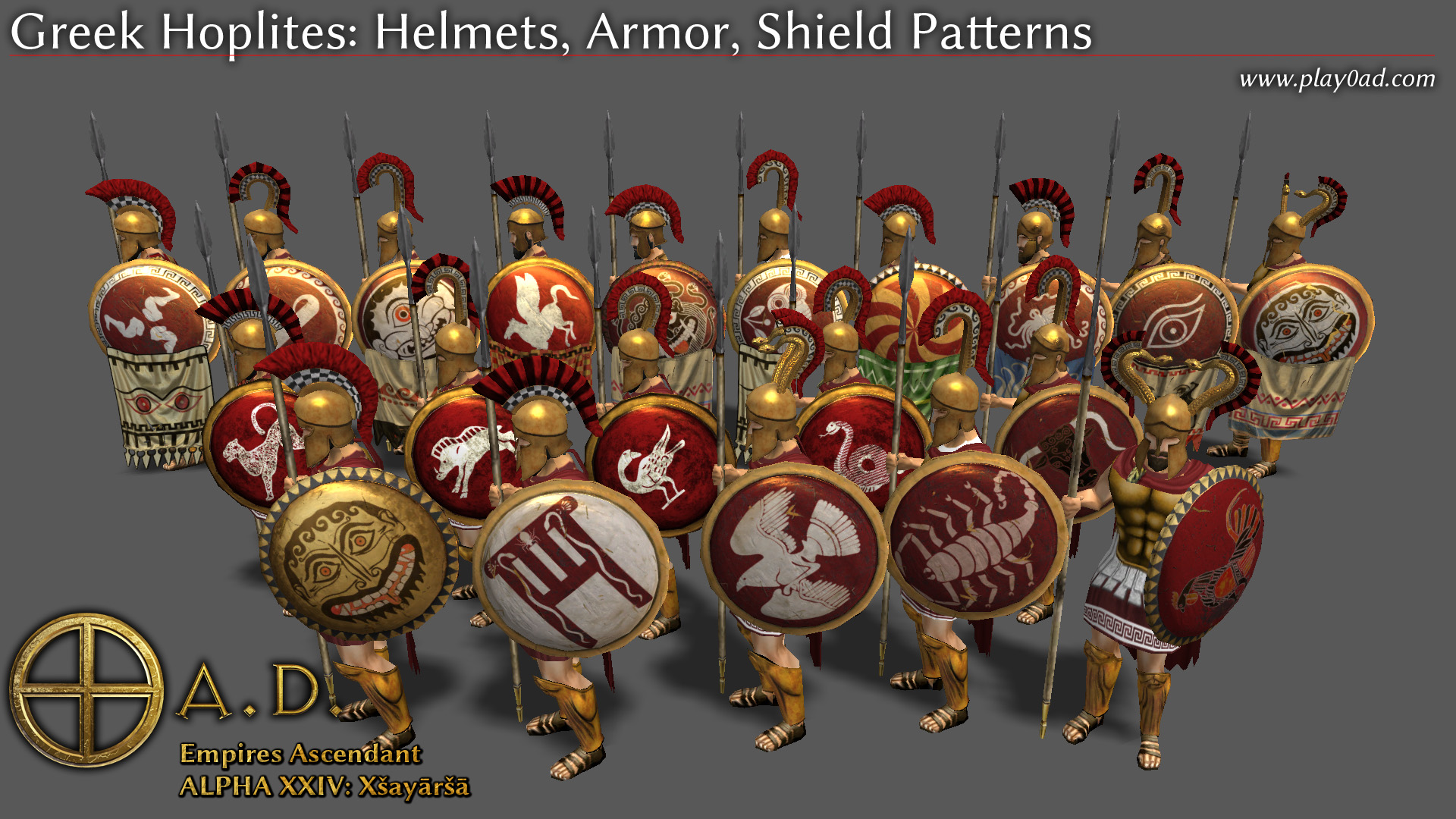 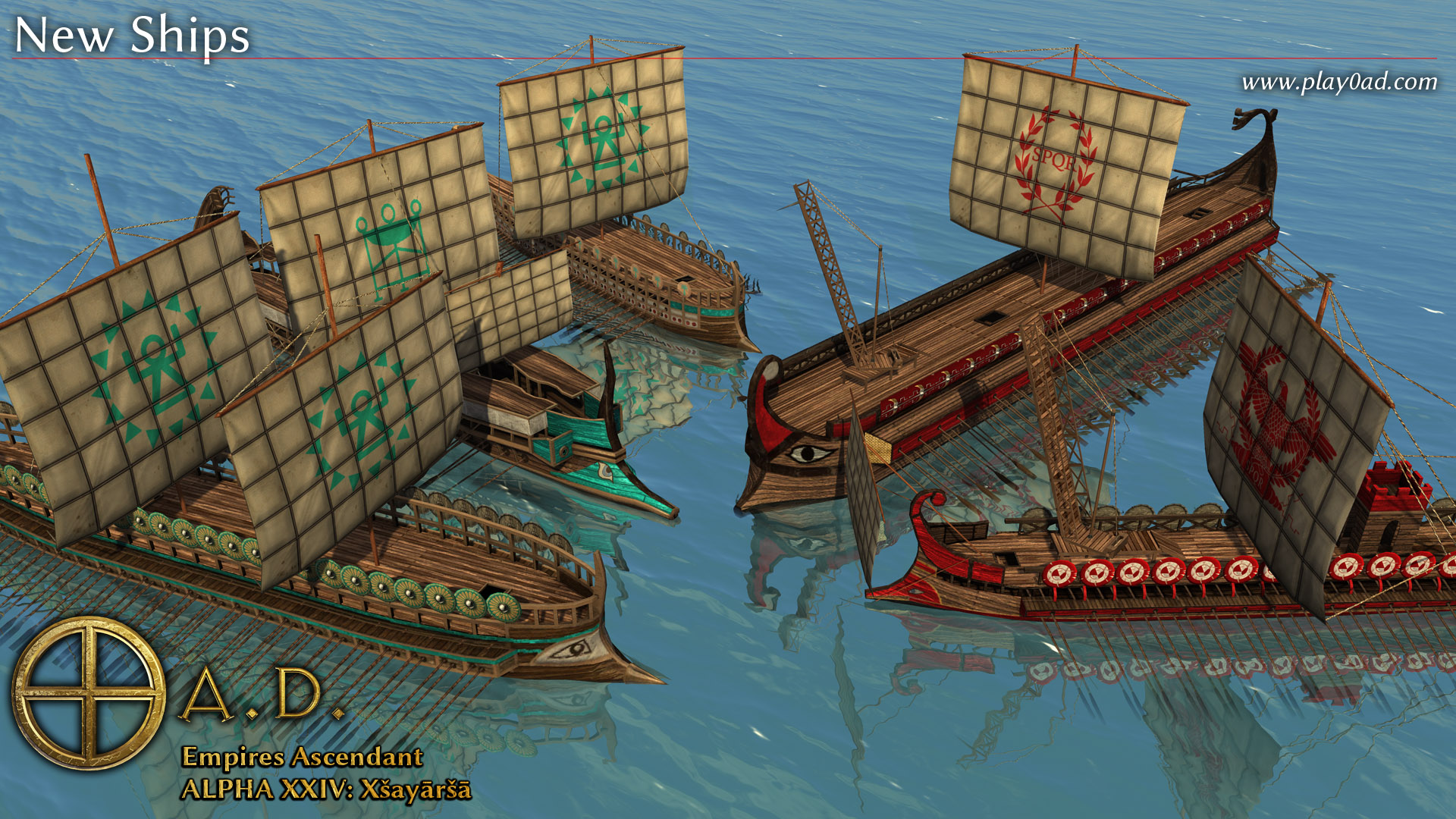 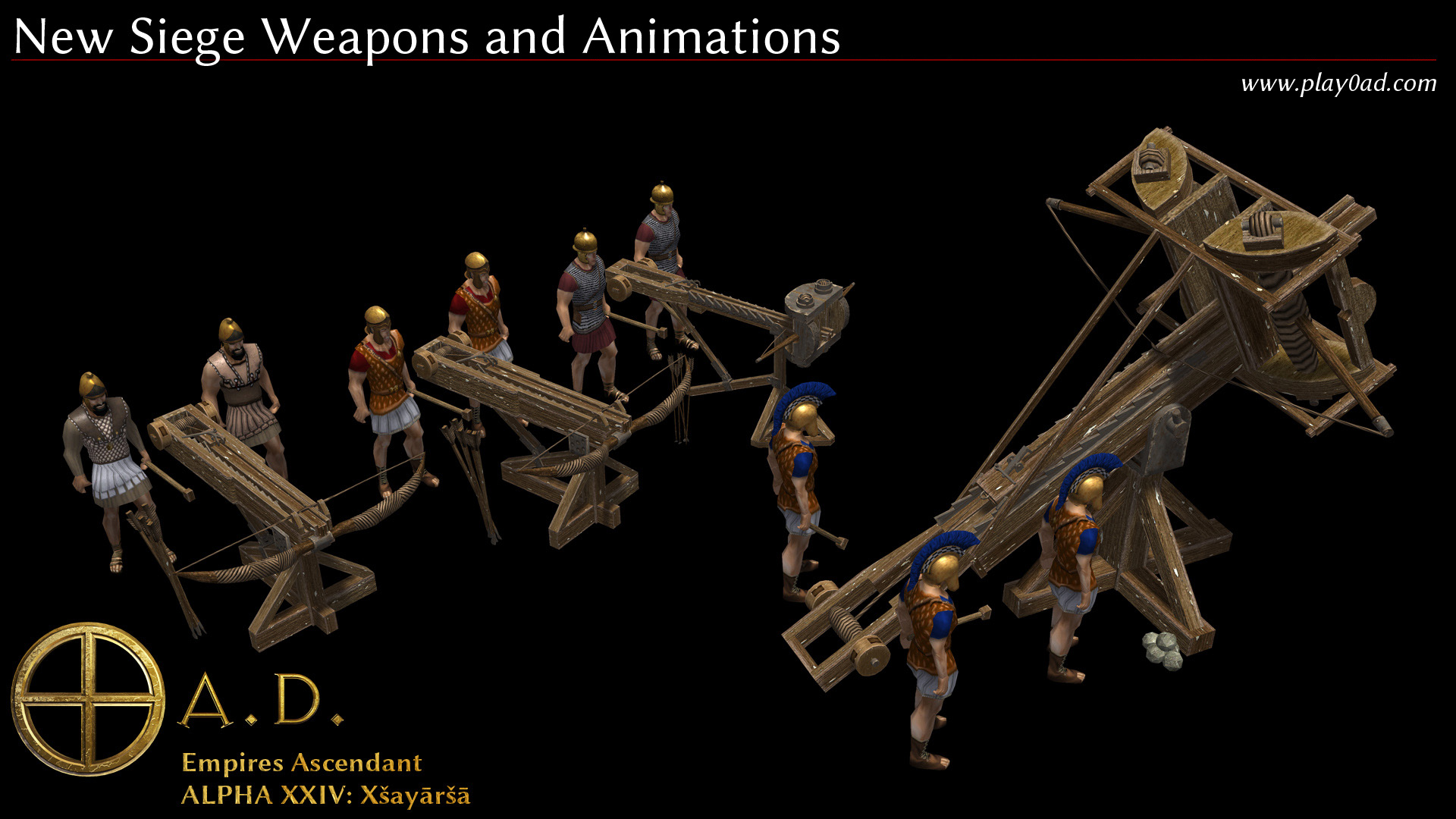 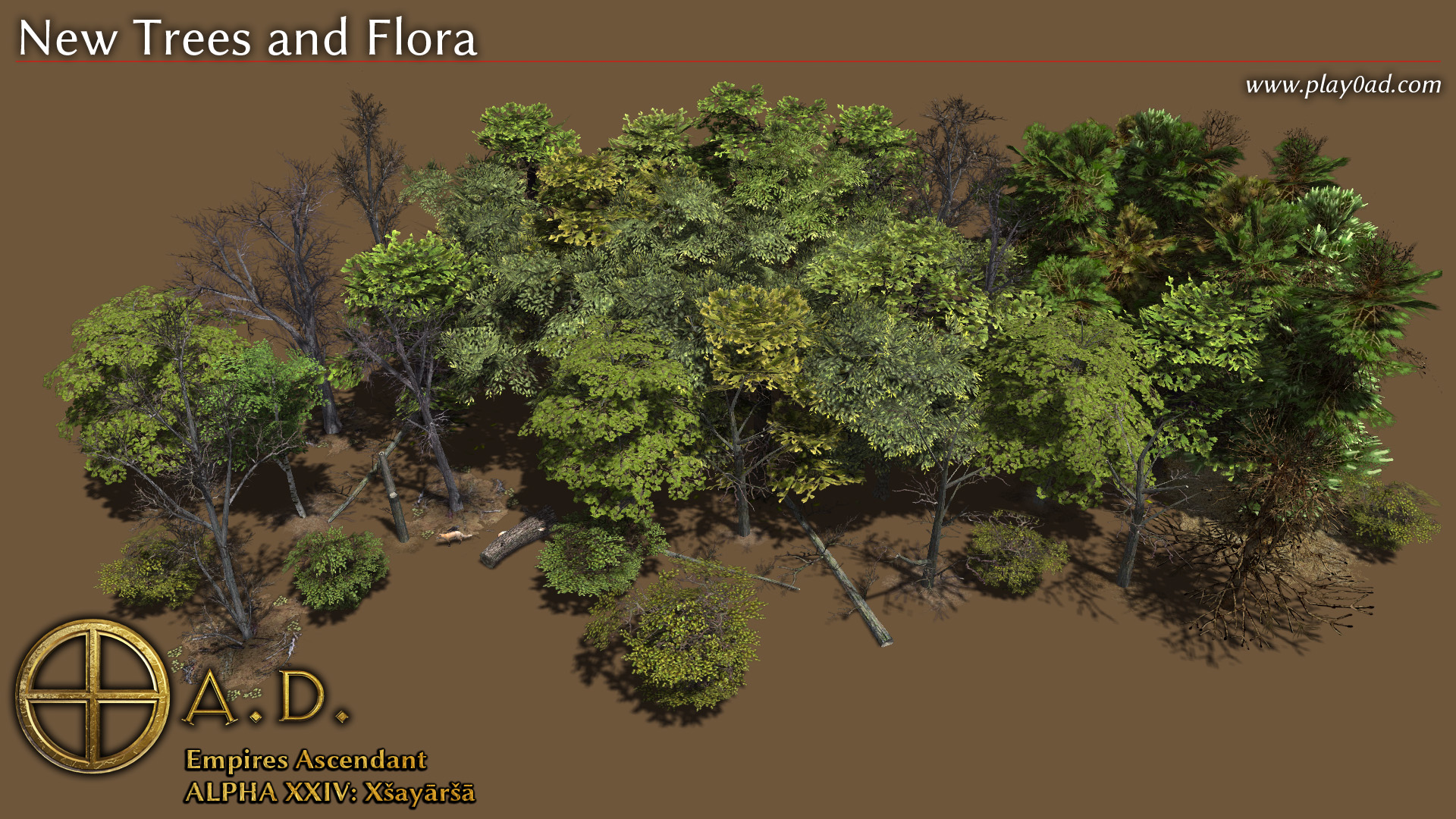 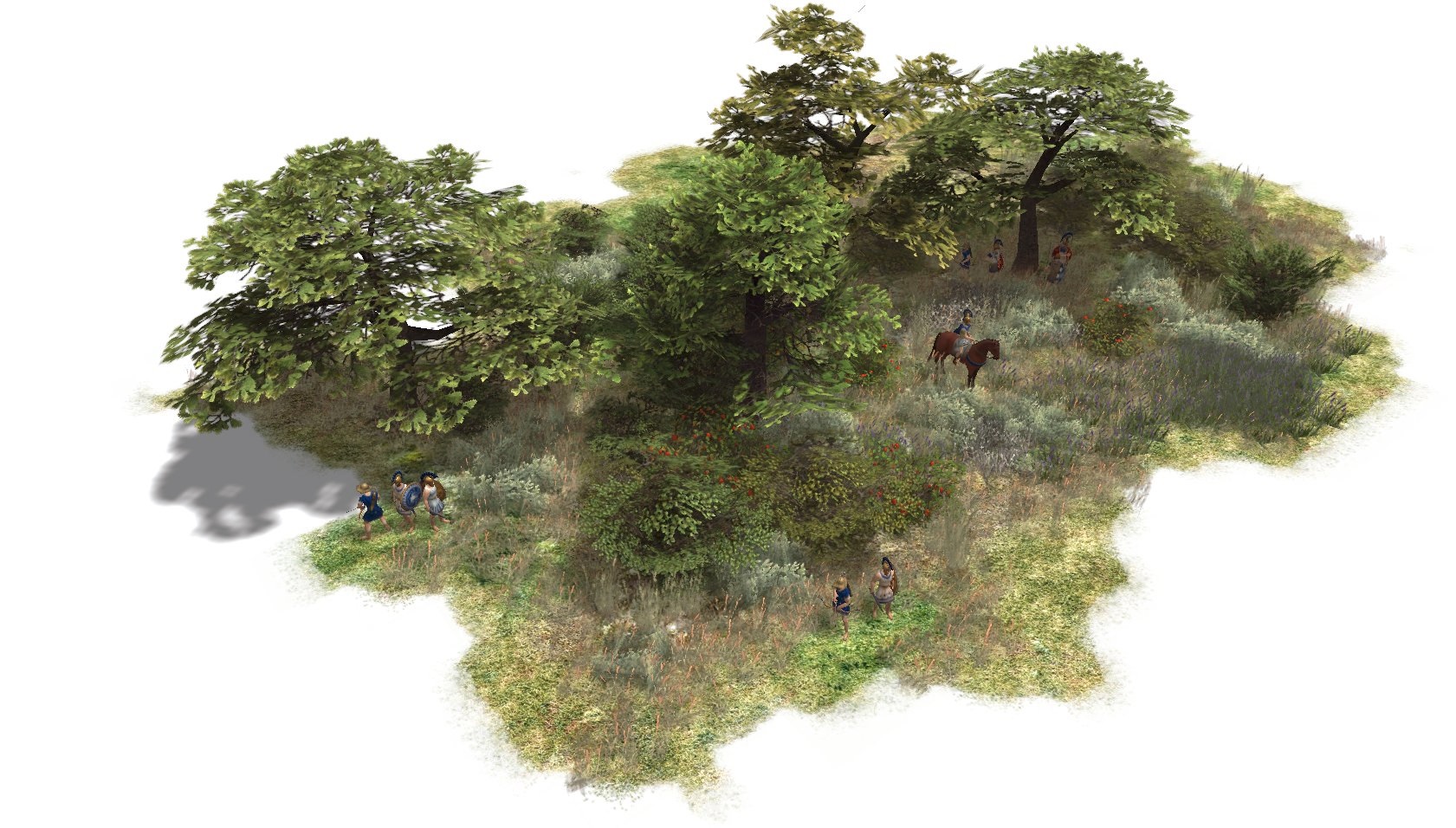 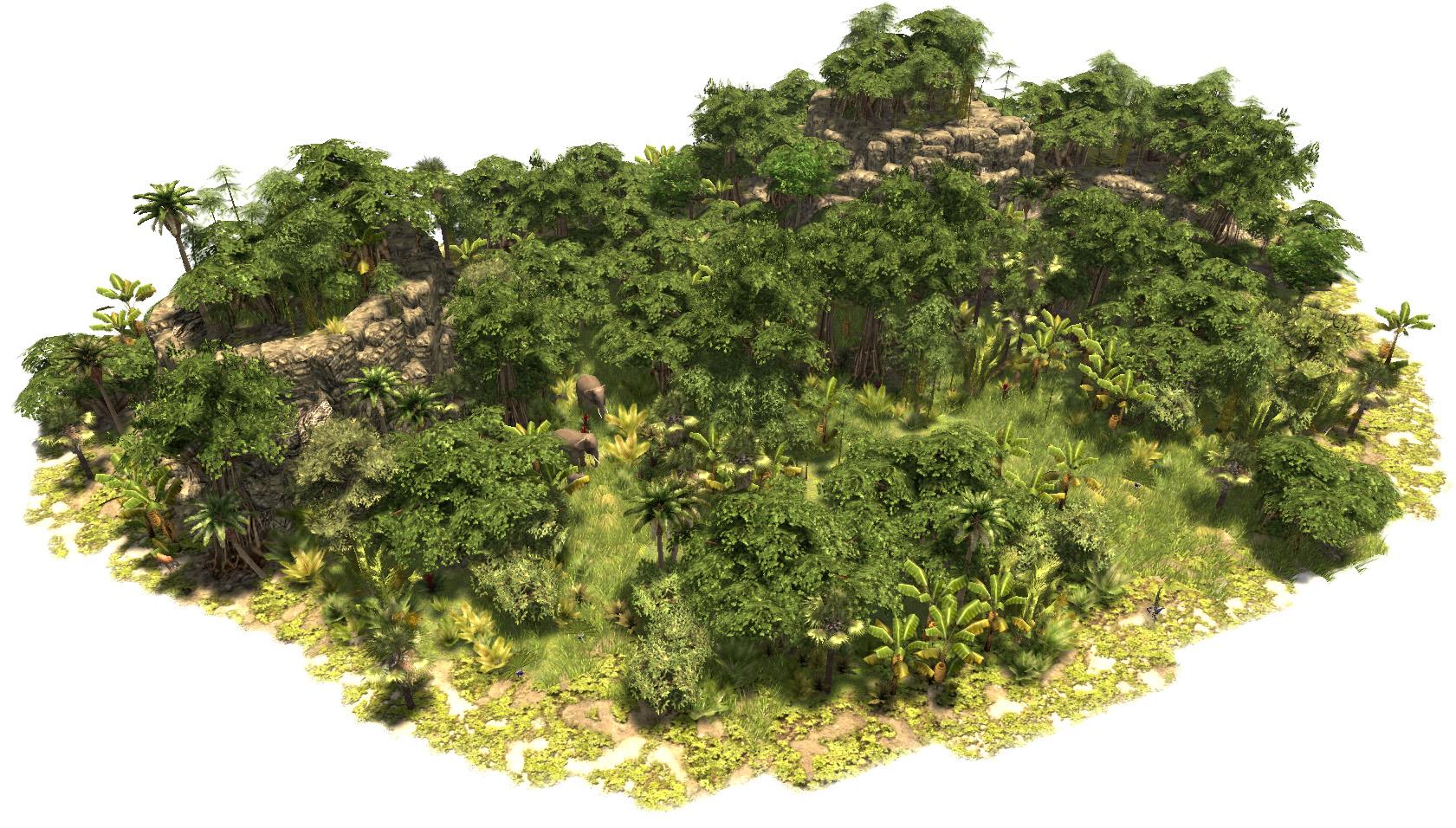 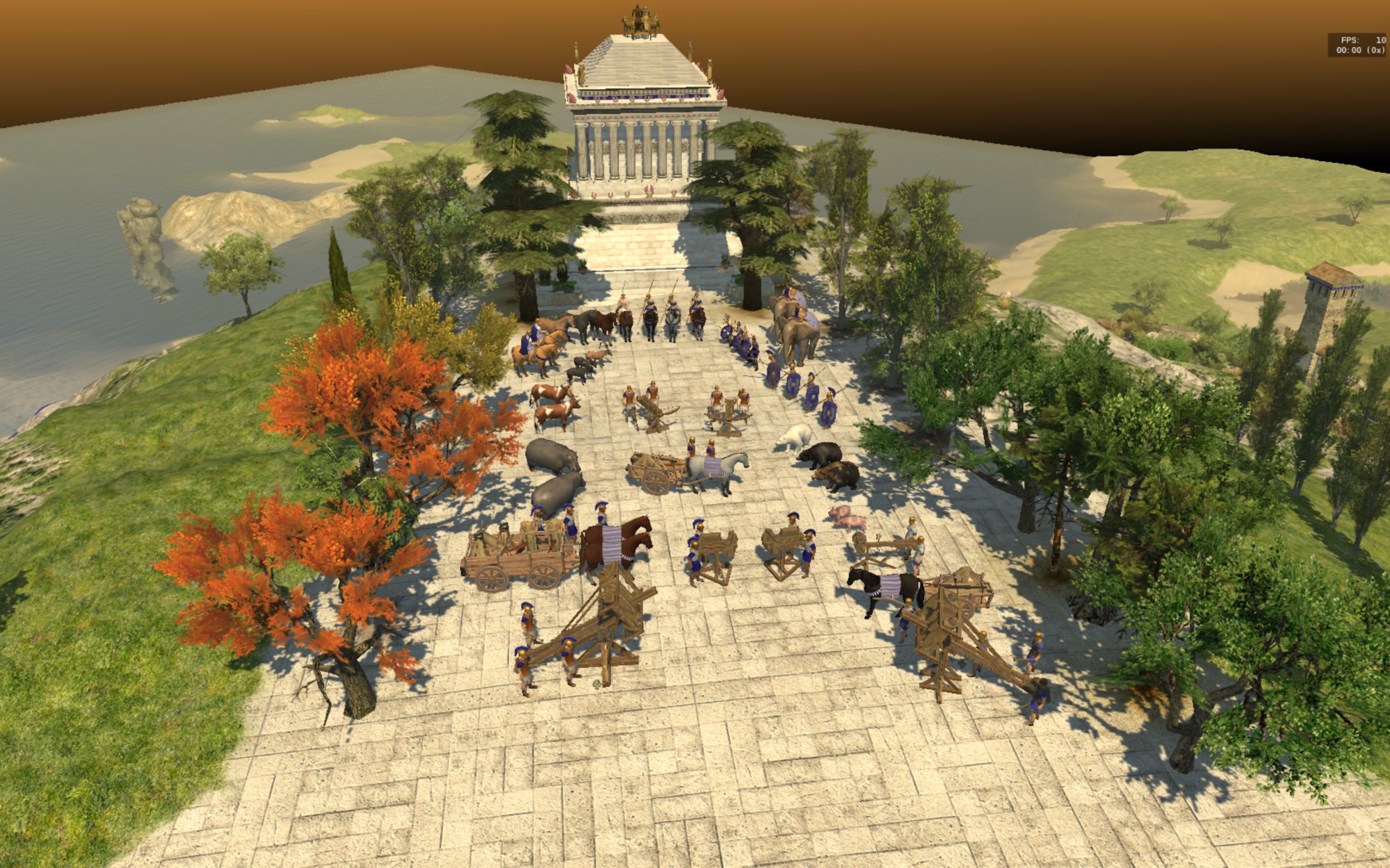 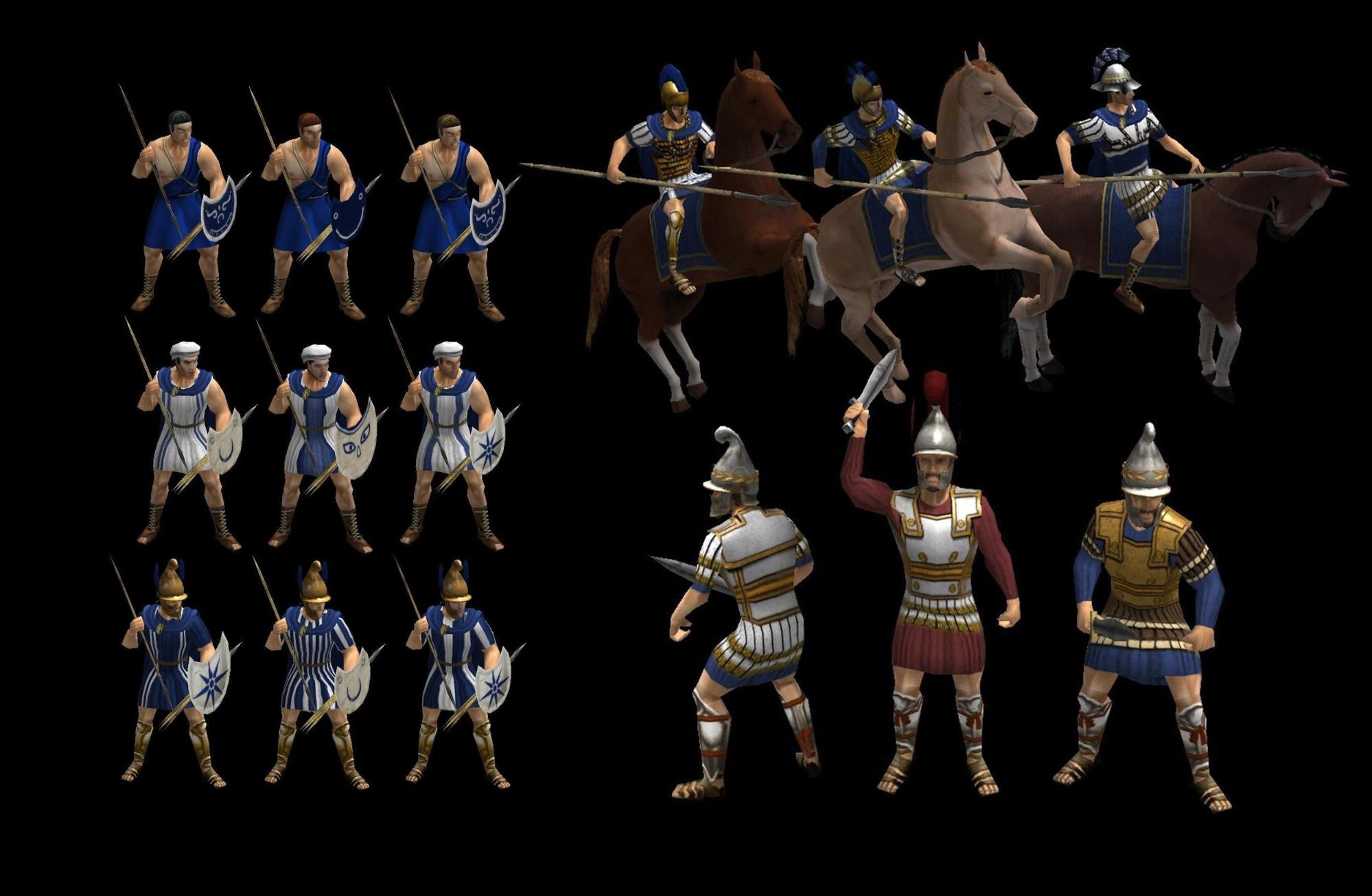 For more screenshots and details on the new art in this release, see our last two development reports here and here. 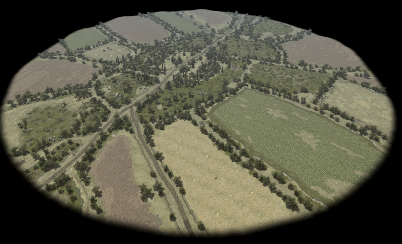 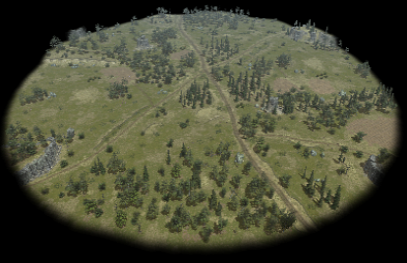 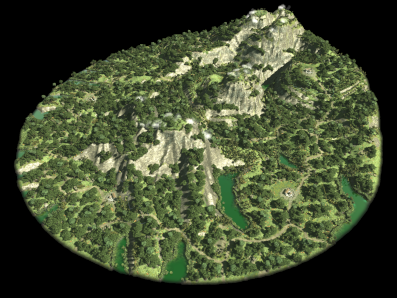 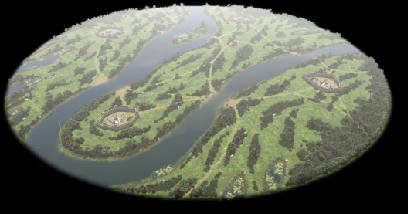 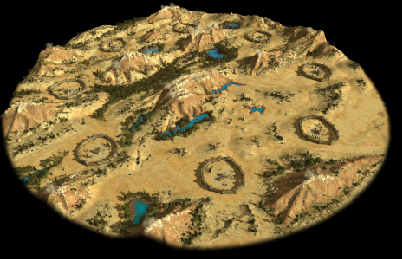 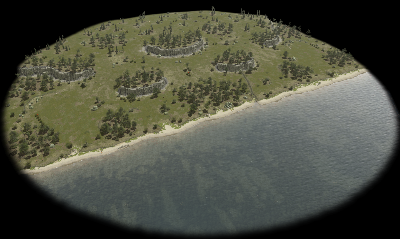 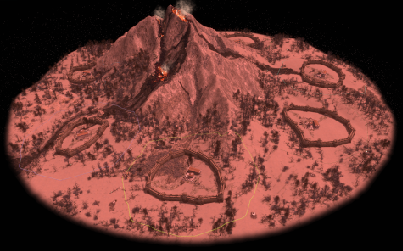 New Requirements: Windows XP, Windows Vista, and anything below macOS 10.12 are no longer supported. The game also now requires SSE2. Furthermore, while ARM macs are supported, unfortunately the code running on them isn’t native yet, so users on this platform should expect a performance loss.

Several modules of the game have been partly rewritten or extensively modified for Alpha 24, which will make them work better and make it easier to extend them in the future. Notable examples include the GUI GameSetup pages, the UnitMotion component, and the renderer has seen plenty of changes with the removal of the OpenGL 1.0, 90’s style “Fixed-Point” pipeline. Which in turn raised the lowest supported version to OpenGL 2.0. In addition, we started to fully use the ARB shader pipeline.(Modders, all of this means you will also find there are plenty of new cool things you can do!)

Alpha 24 sees the adoption of Visual Studio 2017 as the main Windows compiler (Alpha 23B had Visual Studio 2013) , and we have upgraded our version of C++ standard from C++11 to C++17, allowing us to write faster and cleaner code.

This release also saw major upgrades to many core libraries we use. Alpha 23 was released with Spidermonkey 38, released alongside Firefox 38 in May 2015. This time, we’ve upgraded to the last “ESR” version, Spidermonkey 78, released in June 2020! This means we can use newer Javascript syntax, and the engine bindings have been upgraded. Other libraries have been updated on macOS and Windows, which let us support more platforms but also required us to drop some.

Xšayāršā (pronounced Khsha-ya-ṛsha; IPA: /xʃajaːr̩ʃaː/) is a transcription of the Old Persian name 𐎧𐏁𐎹𐎠𐎼𐏁𐎠 (x-š-y-a-r-š-a), better known by its Greek spelling: Xerxēs. Xerxes I the Great was the ruler of the Achaemenid Empire from 485 to 465 BC. We decided to name Alpha 24 after this inspiring ancient ruler to celebrate the ancient Persian civilisation, and to reflect upcoming changes in the internal governance structure of 0 A.D.

The Persian Empire was considerably larger than any preceding state anywhere in the world, and its administration system would have a long-lasting impact. It consisted of about two dozen satrapies (provinces), which were former kingdoms or conquered peoples. Each satrapy was headed by a satrap (governor or viceroy) and supplied the Persian King of Kings (emperor) with a yearly tribute and troops, but were internally largely autonomous. This organisation outlived the Achaemenids and was continued under the Macedonians, Seleucids, and Arsacids (Parthians).

Xerxes inherited the empire from his father Darius I the Great. He continued his father’s reforms and expanded the imperial building programmes. Early in his reign, he led an ultimately unsuccessful invasion of Greece, with victories at Thermopylae, Artemisium, and Athens in 480 BC, but defeats at Salamis, Plataea, and Mycale in 479 BC. The rest of his reign was largely peaceful. The Persian Empire arguably reached its zenith under Xerxes.

This release cycle is the longest we’ve ever had as you no doubt noticed, and it was a bumpy ride. Despite this, we’re hoping to get back to a more regular schedule now.

As usual, for the next alpha, we welcome fan suggestions for words relating to the ancient world beginning with the letter Y. Keep it original and related to the time frame portrayed in 0 A.D. (c. 500 BC – 1 BC). Post your proposal here!

Holy! Longtime observer of this project since it's very early days. I was wondering when the next release was going to be made. I made a compile from source a month ago and the improvements were huge. Much more then the changes in between previous versions. Congratulations on this milestone guys!

It's great to see the work goes on! Keep it up!

Add a grand strategy campaign layer and you'll be golden.