In our latest lore release, a wandering trader from Qadaroth imparts some top tips for dealing with a Draaven. 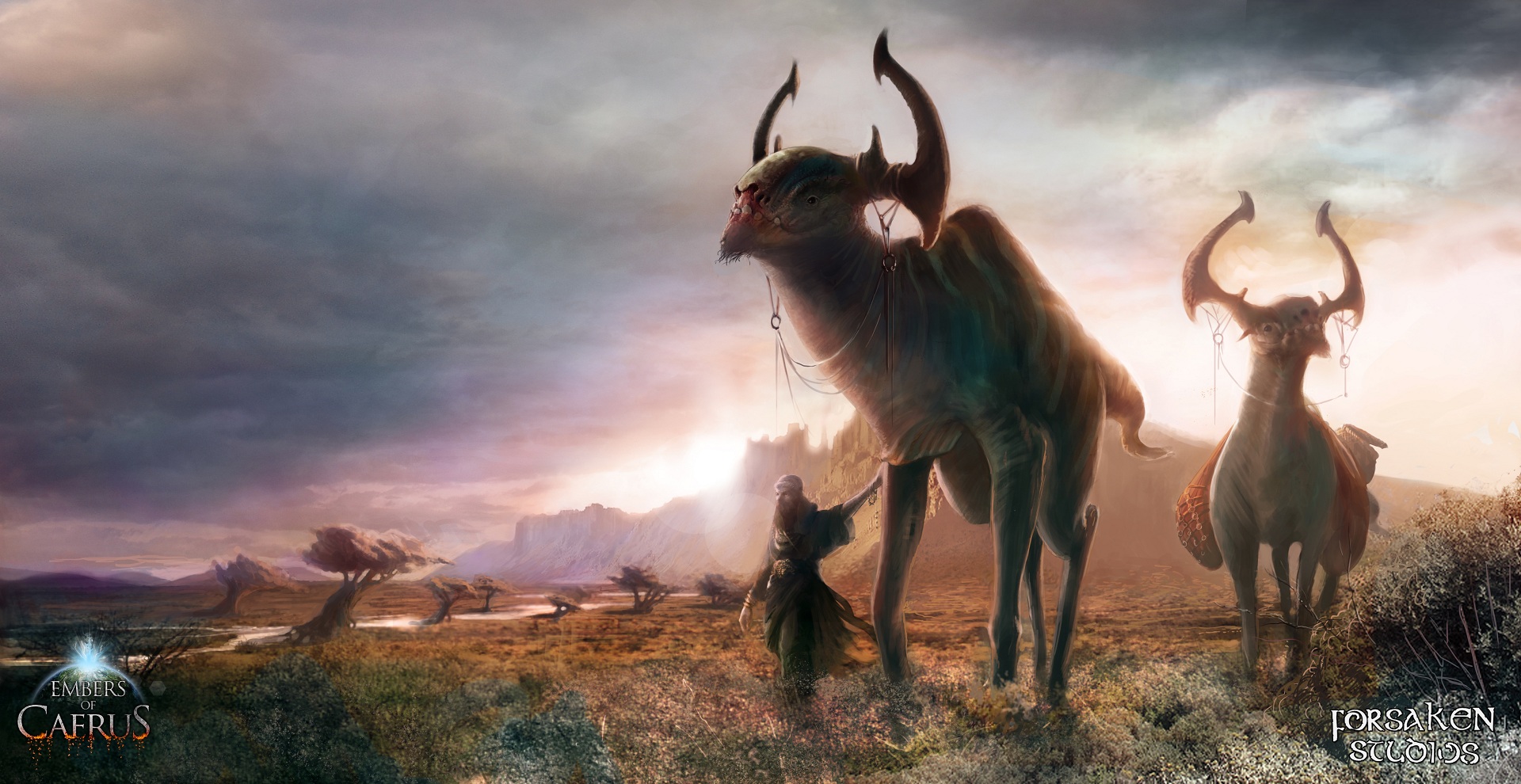 I bought my first draaven last week. I learned an important lesson that day: draaven are not meant to be ridden. It might seem like a good idea at the time – believe me, it isn’t. I found out the hard way. So seeing as you’re so keen on making a name for yourself as a trader in this forsaken land, I figured I’d share a few of my hard-learned lessons with you. That way you might have a few less broken bones, and a few more coins to your name.
If you’ve spent any time at the beast-markets in Mazan-Ur you’ll have heard Phatus One-Hand listing his Six Rules of Animal Husbandry while he tries to sell you a blind sand-hawk, or a lame draaven, or one of those horrible lizards that like to lay their eggs in your hair. So you can consider these my Six Rules of Not Breaking Your Leg When You’re Thirty Miles From the Nearest Oasis. Much more useful, and I won’t even try to sell you any lizards either. So.

Draaven are not meant to be ridden. Self-explanatory, no? You’d think so, but there’s always some idiot who’ll try to find a way to clamber up onto a draaven’s back and ride the damn thing. And by “any idiot”, I mean me. It’s the legs, you see. Just look at them – taller than a man, with twice as much muscle. You can’t blame me for thinking that a draaven would make a nice, fast mount. I realized how wrong I was somewhere between being thrown from its back and smashing my face on the floor. I lost a tooth – look, you can see the gap right here. Anyway, don’t try to ride them. They don’t like it. And a man only has so many teeth.

Draaven are not guard animals. Yes, another obvious point. What can I say? I like to test my theories. Actually, you can blame my brother for this one. We have a long-standing bet, you see. He claims that the Ragged Crown is just a rock formation on the Bleak Scarp. I reckon it’s a ruined fort from before the Great Dying. If you look at it when the sun is rising from behind the Scarp, you can see the battlements clear as day. Rock formation? Please. My brother is a bigger idiot than I am. Sorry. Where was I? Right – guard animals. My brother suggested we set our draaven to watch over our camp while we climbed the Scarp. Complete waste of time. When we got back to our camp, one of the draaven had been eaten by swarm-scales and the other had run away. It tangled its horns in our tent as it fled and took that along with it – you could see bits and pieces of our belongings scattered across the scrub for a mile or two. Not the most comfortable of nights, let me tell you. What about the Ragged Crown? You’ll have to find that out for yourself, I’m afraid. A man has to have some secrets, after all.
Moving on.

Draaven do not like things on their backs. You could probably have figured this out for yourself, especially if you’ve tried riding one. But the same applies to cargo, packs and the like. You have to hang all your goods in bags from the draaven’s sides. Don’t put your valuables on the creature’s back. It will either dislodge and break them, or it will run away. Good luck trying to catch up. Which brings me nicely to rule four.

Draaven are faster than you. Really. Don’t even bother. Just buy another tent.

Draaven horns are not for decoration. You might think that, as an herbivore, a draaven would be skittish, cowardly, and prone to running away. Well, you’d be right, but that’s not the point. There are two times when a draaven is dangerous. Firstly, when it’s protecting its young. And secondly, when it has nowhere else to run to. I’ve seen draaven mothers tear entire corrals apart to reach their calves. I once saw an Ixcari mercenary beat a young draaven for some reason. The calf let out such a clamor that its mother heard from halfway across the oasis and came running as only a draaven can. The things the mother did to that mercenary... doesn’t bear thinking about. So be nice to the little ones. And don’t corner the older ones anywhere – they really don’t like it.
My final rule is not really a rule at all actually. But calling them Five Rules and a Weird Observation doesn’t sound quite as good, so you’ll have to forgive me. Anyway...

Draaven were not always like this. Just look at those faces. Can you think of any other desert creatures that look like their lips have been torn off their skulls? It’s not natural, I tell you. And my grandfather agreed. He died when I was young, but he was a boy in the years following the Great Dying. And his grandfather claimed the draaven from before the Great Dying were different. Smaller, less skittish. And with these long snouts that could wiggle around like some of those creepy monkeys from Nupoanqa. Somehow the Great Dying changed them. Filled their minds with fear, warped their bodies, made them monstrous and strange. My grandfather reckoned that the Great Dying wounded the world in some way we can’t properly understand, and the draaven are a part of that somehow. I don’t know. He was a crazy old man.
So there you have it: six rules to a happy and successful life as a draaven trader. Treat them kindly, calmly, and don’t over-burden them – in return they’ll give you many years of loyal service. Treat your draaven poorly and you probably won’t live to tell the tale. Not everyone is as lucky as me, after all.