Do you like big guns? These are about the same size as the player character!

Since the guns are big, they are easier to see even from a longer distance. Realistic sized guns just look too small in a computer screen. 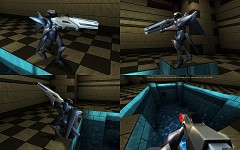 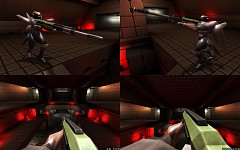 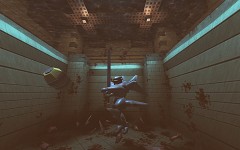 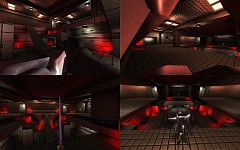 There's also a throwable Bomb that can be throwed at any time without needing to change weapon. Also the Sword got an alternate attack that shoots some electric bolts that can bounce once or go through one target.

Showing the new guns in action in a level that looks more like a level. As player can jump high, and eventually fly, I thought there should be lots of vertical stuff in the levels. The monsters should also be able to move around better, so they wouldn't be so "stuck" on the "platforms" I place them in the level editor. I'll get into that when I get some new monsters into the game.

The HUD graphics are a bit temp, but at least it's not the brown Quake HUD anymore. Also made some console characters.. at first they were in a similar style as the big numbers in the HUD, but that was too unreadable. I'll probably change the HUD numbers into a similar style as the console characters, plus make some big font for menu graphics etc. The current big font is just unreadable when there's lots of text.

hey man this is looking freaking awesome ! i like everything i see. really like the cool ghost effect when you swing the sword! how did you do that (not the projectiles but the faded blur of the sword when you swing)

Duplicated the blade polygons, pushed them out a bit, added some edge loops around it. Then some bones and animation. Texture done like some muzzle flash effect, so it has some transparency. The code also fades it out completely after the swing.

The projectile is about the same model, but doesn't have the edge loops for the animation.. and it uses the same texture.

Looks great, glad you're back on the q1 engine :)

Me: Am I going to sell my game when it's done?
Magic 8 Ball: Without a doubt

There will be a free demo, which will be one episode or something equivalent.

But it's possible it'll be all free completely.

Dude, never give away this game. I haven't been so stoked for a Quake mod in a long time. This is worthy of my money. I'd pay you when its released. So far I think I'd pay $20 when its all done. Depending how much new and unique things you do with the game that $20 will go higher that I'd be willing to pay.

This looks like an awesome game, are you going to attempt a Greenlight?