Neofeud development continues to continue. At the moment we have about 25 backgrounds completed, 40 or so character animations, and at least a thousand lines of dialog. Plus, a Neofeud short story has recently been published in the most awesome sci-fi/fantasy magazine, Mythaxis! Finally, we'ere considering starting a Kickstarter, or some other form of funding. Taking suggestions!

Neofeud development continues to continue. At the moment we have about 25 backgrounds completed, 40 or so character animations, and at least a thousand lines of dialog.

First the super cool, morale-boosting news. A Neofeud short story has recently been published in the most awesome sci-fi/fantasy magazine, Mythaxis! 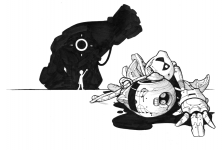 A cyberpunk short story set in the world of Neofeud. 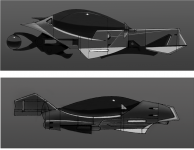 And here's a brief intro/trailer for Neofeud, complete with anti-smoking cigarettes:

I have been approached by a few social media marketing companies offering to handle hyping / buzzing Neofeud up, guarantying a thousand new followers per month and such. Here's an open question to any fans listening: do any of you have experience with such campaigns? Would you recommend a company such as Silver Spook games and specifically our Neofeud project bring such a marketing company into the relatively shoe-string-budgety fold at this point?

One other thing: I am considering starting a Kickstarter, or another method of creating sustainable funding for the project, so that I can continue to live inside of the $1400 studio w/ no utilities that gentrifying megatropolises like Honolulu, SF, and New York continue to prove. (We're based in the former.) So please, Kickstarter, Patreon, funding advice is super welcome! I really want to take this project to completion, if at all possible.

I'll be considering doing some fan-response videos, or something of the sort. Maybe some "making of Neofeud" videos? Let me know! I'm trying to figure out this 20-teens, internet-community thing and want to give fans what they want! (EXCEPT a completed Neofeud release in two weeks, lol).

Wow ,things have really moved up a gear recently ,nice to see :)
Good luck with the release .

Thanks! Yeah, I'm considering the best way to move forward with the release to make the biggest splash and such. Another possibility is releasing the game in episodes... I guess the benefit of that might be more options for fan participation in commenting / Let's Playing, spreading the word and helping drum up support for another installment?