A look at some new uniforms for the first Warband mod with 1,000 watchers.

Firstly I'd like to say that L'Aigle has become the first Warband mod to reach 1,000 watchers. Thanks for that and all the support.

Now, work on the mod has been a little slow as I've been fairly busy as of late, but work nevertheless continues. Lately I've been working on some pretty cool non-uniform related things which I may be showing in the next update. For now, here are a couple new troops.

First you'll see the Voltigeurs (green plumes, epaulettes and horn shako badges) and Fusiliers (blue plume, shoulder straps and trophy shako plate) of the Duchy of Nassau, a small German state. These troops provide the light infantry force of the armies of the Confederation of the Rhine. These soldiers served in both the Austrian front and in the Peninsular War in 1809, where they saw bloody fighting at Talavera in July.

Next are are the Landwehr of the Austrian Empire. The Landwehr was a conscripted militia force created in 1808 to protect the Austrian border in spite of quite a large opposition among high ranking members of the military staff. The 100,000 or so members the Landwehr mustered in 1809 were usually very poorly equipped (most lacking uniforms and instead wearing civilian coats) and trained, and thus performed quite poorly in the war of that year. They'll provide the Austrian faction with some cheap but poor quality low-tier troops. 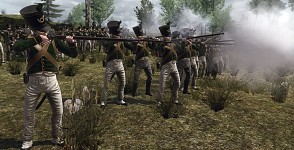 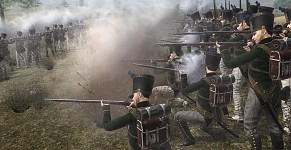 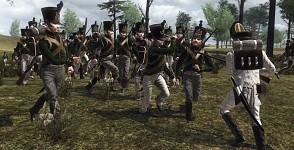 That's all for this update. Thanks for reading and thanks to 1,000 of you for watching!

The detail this mod has is beyond stellar, it doesnt even look like the game is using the same graphics engine. Keep up the great work and i look forward to playing this whenever it reaches completion!

The textures of the models are well done and they are using more gritty shader techniques. Hardly a different graphics engine.

Even they changed the shaders :D Believe in me,that is true :)

Once again. Top works from L'Aigle.

Must be real fun testing all the new units as the modder :P
And ofcourse good job on the graphics and keep up the great work

My computer will play this or die trying! Keep up the amazing work, I mean really I've never seen a better mod EVER!

Please don't release this like Full Invasion 2 was. (Only availible to Windows 7 users) The detail is unparrelel to any mod i've ever seen. Keep up the good work :P

Ahhhh, check this every day, need an update :P

Docm I applaud you on this amazing and excellent work but I was under the impression they were Nassau Jägers not voltiguers, as voltiguers use muskets over rifles? Personally I'm not sure if it even matters but just curious is all ;)