A summary of the development process of Nanotris, from the initial concept to challenges & changes. 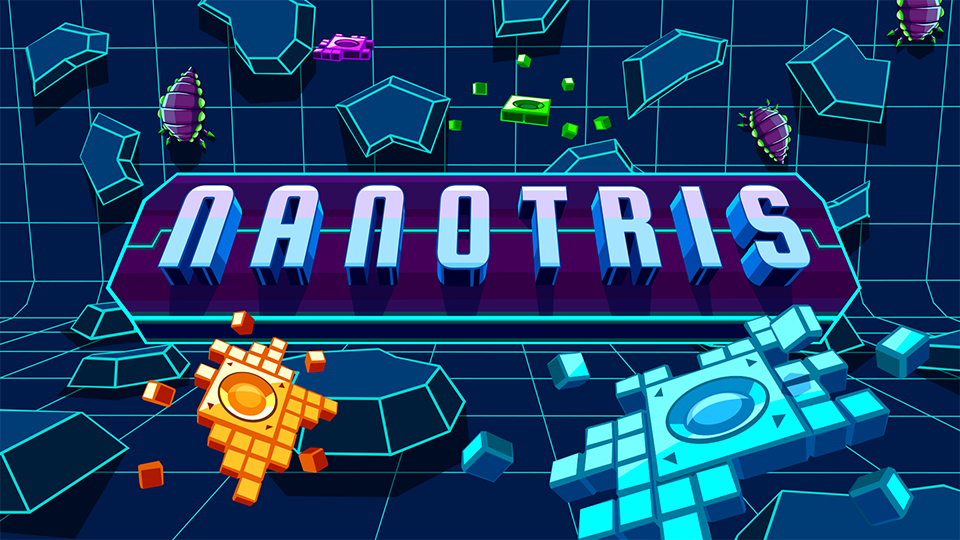 As we are now a few votes away from Top 100 in Greenlight, we thought it would be interesting for you to read a little summary of our 9 months journey with Nanotris.

We started this project in January with a project name "Spacetris". Our initial concept was a local multiplayer party game, with the spirit of cave shooters that were popular in Finland in the 90's.

The game was to be constructed from two parts. Building & Destruction. At the beginning of each round the players would have a Tetris mini-game, where they would build a spaceship around a cockpit from various blocks. The blocks would feature different elements, such as engines, weapons, armor etc. 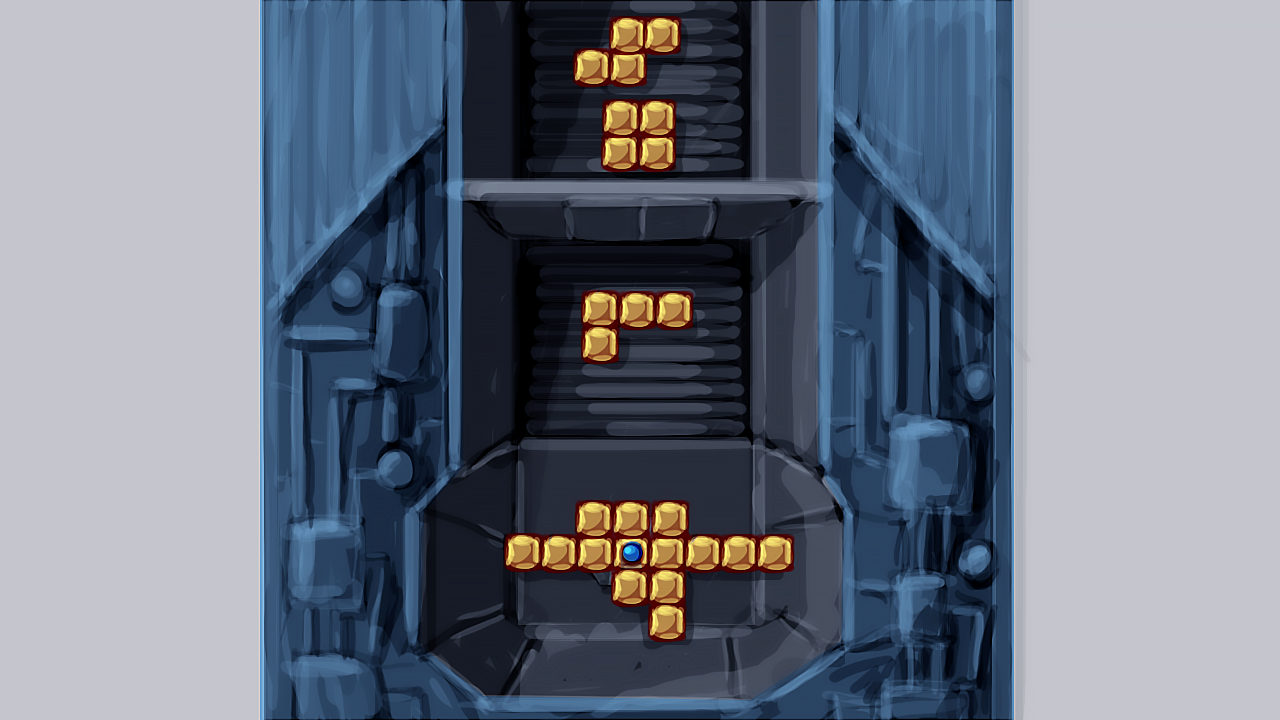 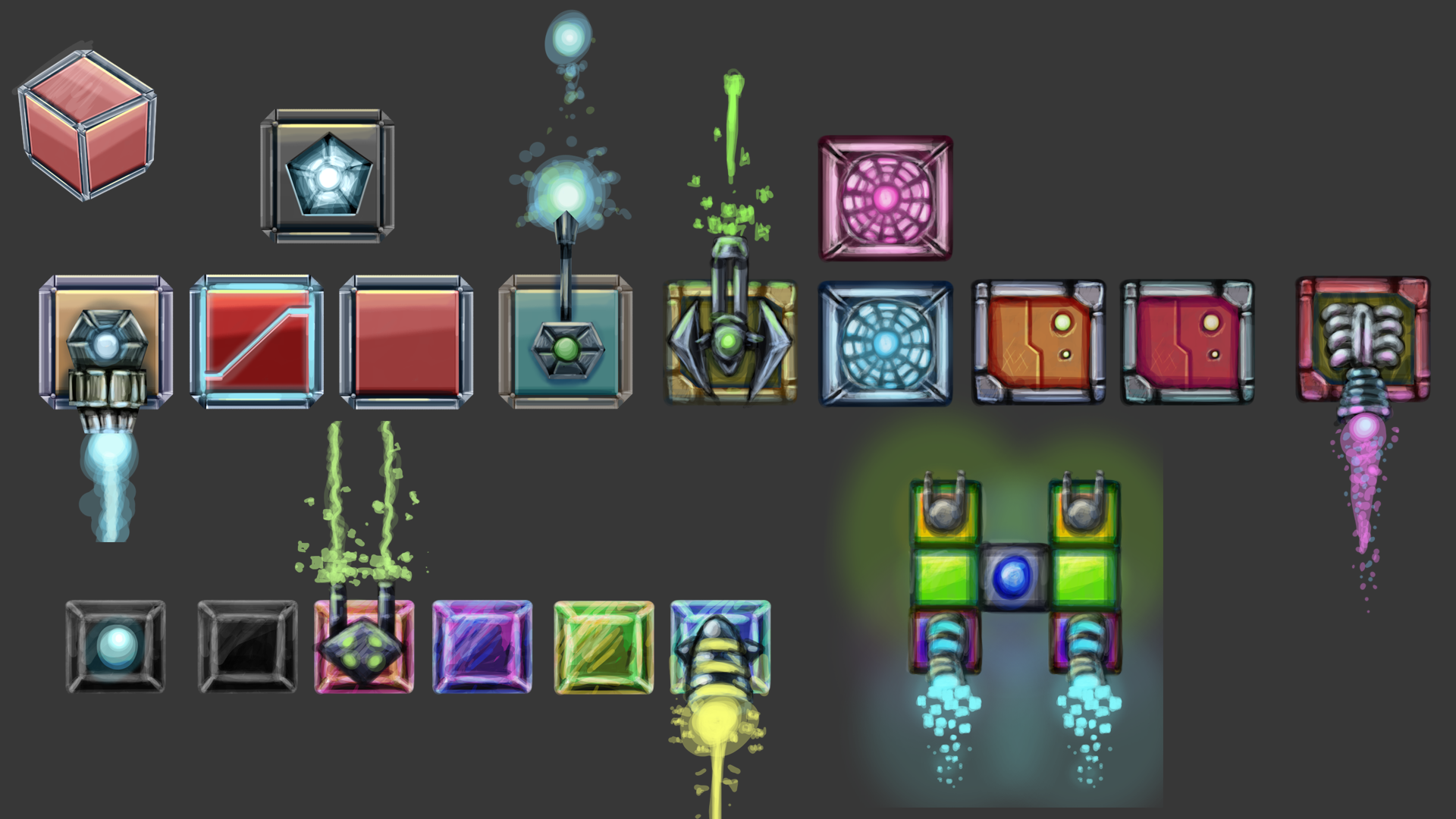 After the Building phase, the Destruction phase would begin. Essentially our idea was to have a space shooter, where the players would have various special weapons, and their goal was to destroy the other players. This all sounded fine, until we prototyped both of them, and noticed, that something essential was missing.

The building and destruction were not the problem. However, the way they were executed was. Building up a spaceship in a Tetris-like setting was fun, sure, but the flow of the game suffered severely from this. The calm building phase was followed by a hectic battle, and the overall feeling of a match from start to end for our test group was just 'meh, it's fine'.

As for the Destruction phase, space as a concept is offputting to some and tempting for some. We didn't want to divide our audience with the theme of the game. Space is also a place, where obstacles would have been quite boring, such as meteors of planets of debris. We started to iterate on different themes.

We fixed the issue with the gameflow and pacing for the Tetris mode by making it work with the same mechanics as the Destruction phase. No longer we had big Tetris blocks, but instead the match would begin with every player gathering small individual blocks with varying properties. The blocks would snap on to the core like magnets. For the theme we wanted to have something with caverns. After trying multiple different themes from underwater to icy caverns, we ended up using something abstract. In the end our Spacetris had become something without the Space and the Tris. :D

After a short while, we also changed our top-down view to a 2.5D 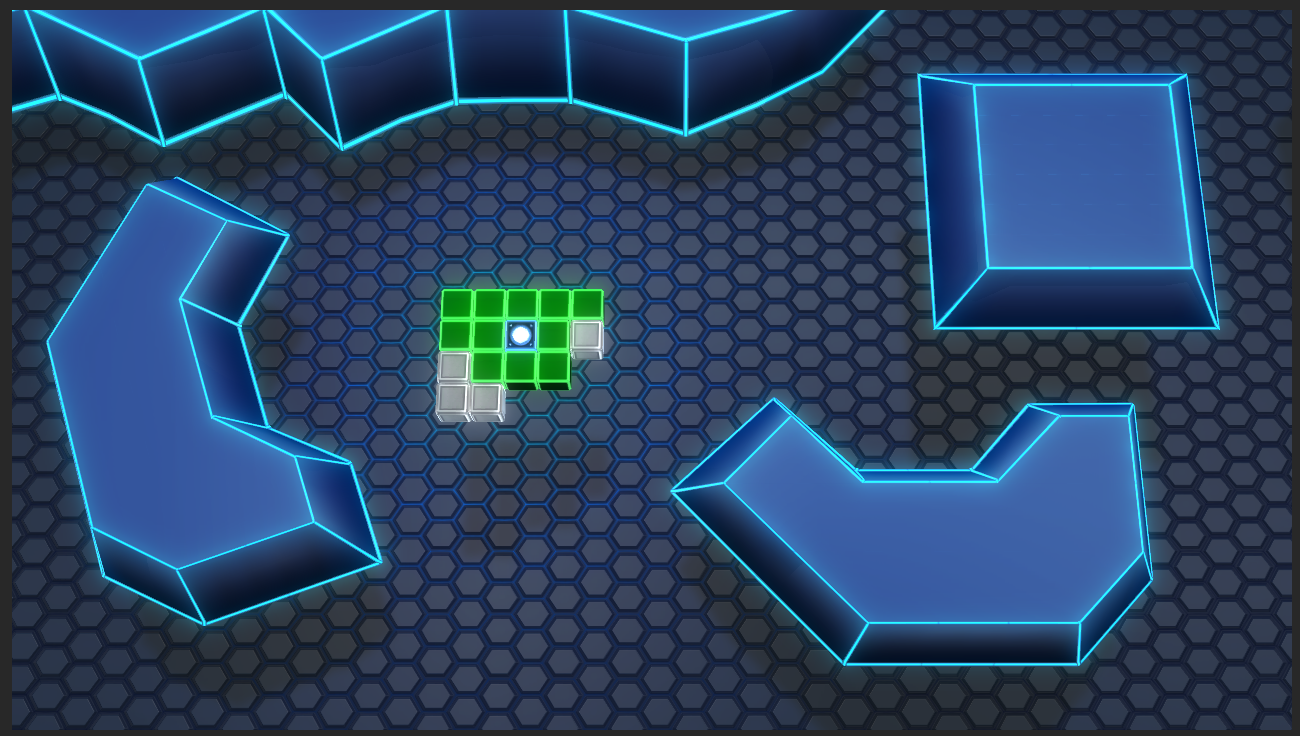 The gameflow of Nanotris was supposed to be the following:

Although the player were having fun, they gathered all the blocks, no matter if they were harmful or not. Player were having a difficult time understanding why one player was slow, when the other had better weapons, etc. All-in-all, they really enjoyed gathering the cubes, but didn't mind what or where they were attaching them. The golden rule of design "kill your darlings" was really hard to execute with this feature. After all, we had programmed all the different cubes and their properties, and we were sure that we're just missing something, and we can fix it. In the end, after countless iterations and game test, the results were always the same: Let the players collect the cubes, remove all of their properties.

As for the problem of special power-ups, players were ignoring them, and we didn't get the cat-mouse effect working. This was a far tougher problem to overcome. At first our power-ups spawned to the arena instantaneously. This created an effect, that whoever noticed it, picked it up. to counter this problem, our designer stole an idea from Blizzard.

In their game Heroes of the Storm, there is a level, where special tributes spawn on the map periodically. Usually what you see in those matches, is that both teams race to the Tribute, and try to win it for themselves. The key to this is suspense and anticipation. We changed our power-up to glow and glimmer on the map before it actually spawns. Everyone has ample time to notice it, and arrive to the scene to compete for it. Our graphical style contained a hexagonal floor, so we used it as a UI element to inform the players of the whereabouts of the power-up. Basically the power-up would "ripple" light out of the center of its spawn point. Phew, we're getting there. Still no success though.

Which brings us to this moment. For the longest of times, players were happy with our game, but the cat-mouse effect that we wanted was still not functioning perfectly. Sure, the players now saw where the weapon power-up would spawn, but they were not racing after it. Our minimap was showing it, the ripple effect was showing it, it was shiny, and made a *bling* sound. What gives?

In the end, the problem was solved with two feature changes. The first one was giving up the split screen camera, and replacing it with a single, dynamically zooming, camera. We had of course tried this camera mode, at the very beginning of our development, but the feature was taken out because the player's didn't see their blocks clearly. So 7 months ago we had a feature, that was disabled because of another feature, that was also disabled later on. Players no longer needed to see if they had engine cubes or weapon cubes or exploding cubes attached to them. They just had cubes.

Single camera mode enabled the players to see their enemies' locations more easily, and when they saw someone racing for the special weapon, they did so too. The other important feature was to give our default blaster weapon a little bit of *oomph*. What this basically meant, was that we added a lot of knockback to the bullets. They still weren't super effective, but they felt like it, and most importantly, you could knock someone away from the power-up from far away.

Finally, after all this time, we had our cat and mouse game. People were shoving each other as the power-up spawned. They laughed and swore to each other. Some got mad as others jeered at them. People restarted matches, and played 30 of them in a row.

Nanotris had all the elements of a great party-game, and with a suitable Tetris metaphor: