More updates about changes to the buildings, plus video demonstrating some of the changes we've made to tanks so far (such as the view, damage to infantry, and shell drop).

We recently had a little staff get-together to start to put together a bit of a new to-do list. It's pretty long, but that's not surprising considering all the things we've got planned. Also, you might have noticed our main site and forum have been updated so that the APB theme OWA made is available to everybody. It's a bit of a classic look based on the old grey theme we once had. The style makes a lot of things easier to read, but people who use certain exotic colors to post on our forum might still have unreadable text. Speaking of that, the player count displays on the forum and front page are all fixed up as well, and no longer have the eye-searing yellow background!

It's not a whole new set of buildings or anything, but a few changes are being made to the existing buildings by ChopBam for some usability enhancements. We actually didn't have most of the building interiors available in a "modern" format, so it's always a challenge to convert things back to a 3ds Max file to make these changes. One of the updates is some simple "you are here" indicators for Missile Silo elevators. 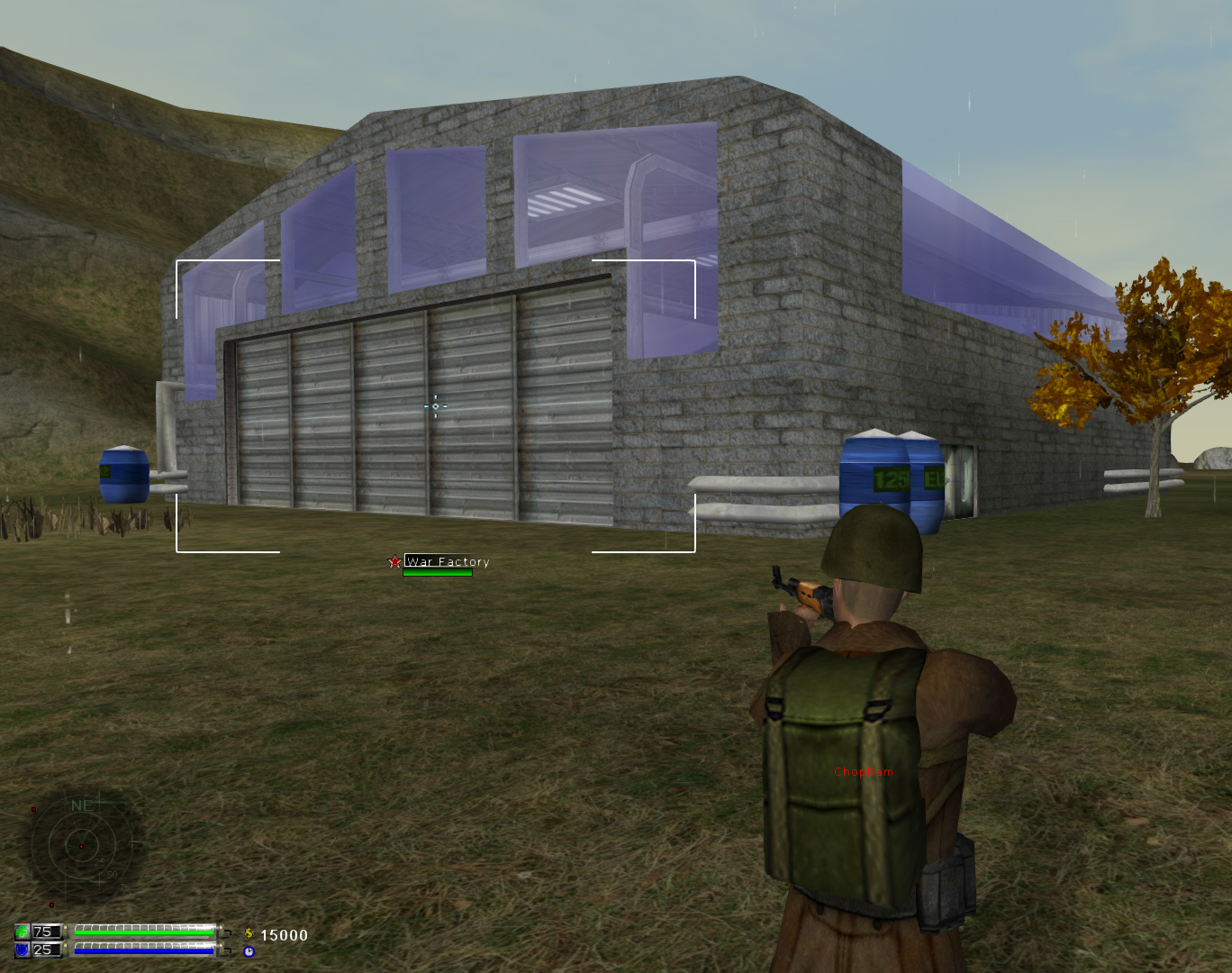 See that picture? That's right, you can actually target and shoot the large doors present on most buildings. Took us long enough :) The elevator honestly was not the biggest problem the Missile Silo had. The more glaring issue that people more or less get used to is the fact you can't damage it by shooting the large silo door on top, which is perhaps even more evident with the War Factory garage doors, or just doors in general.

That was one of the bigger issues on our to-do list, and importing/converting our older models into a more modern format was one requirement for these fixes. They used to be largely in GMax formats that are not supported by modern tools, and are not particularly easy to convert. In a few cases we simply did not have the original models on hand, either. ChopBam's got that under control now.

We've already talked about the changes for infantry taking damage from tanks. Here's what it looks like in practice. Note that the damage and infantry health levels aren't final, but this should give you a good feeling for how it will work. You might want to view the first video on YouTube with annotations enabled for an explanation of what's going on.

As you can see, direct hits from a tank are more lethal than before, and tank shells travel faster, although the rate of fire is lower and there is a slight arc to each shot which can make aiming with the Heavy Tank in particular a bit trickier. Splash damage is pretty much a minor threat to infantry who still have armor even for shells landing at their feet, but once gone (at about 75% health) a soldier will take high damage even from explosions that are several meters away.

A few people who've been hanging out in our TeamSpeak channel have had a chance to see us working on this, since we periodically will do live streaming of tinkering around with settings. We're still adjusting a lot of these changes, but the second video demonstrates the current extent of the ballistic drop for the two main tanks. While it's harder to land shots, hits do a lot more damage.

One of the other changes proposed is the ability to control explosion wall penetration for each weapon. This way, things like grenades, flamethrowers, or light rockets won't be much of a threat if you've got some cover to hide behind, and taking cover behind a barricade of some sort will be even more useful if you're fighting against a tank on foot. However, heavy weaponry such as the V2 Rocket or especially the Demolition Truck will be less impacted. Saberhawk's working on that change, and it's now in place.

That should give us additional options for explosive weaponry, like perhaps making the Mammoth Tank's rockets once again damage buildings (but not penetrate walls). Originally they were made unable to harm buildings simply because it was too easy to damage the building and kill every player inside at the same time.