March development blog for This Thing of Ours. Please check the newest information on the features and design of the project that has been running for nearly 3 years!

Good day to you all! First of all, I hope you are all staying safe in the current circumstances that we are all in. It's been a very busy few weeks for the Skull Crackers Entertainment team we have used the lockdown as an excuse to be extremely productive. A lot of areas of the project have had a lot of man-hours injected into it to them to further develop and fix a lot of major bugs that we have been facing. In this development blog, we will be talking about the programming, mapping, empire panel and further up and coming features.

You can now also find us on DISCORD : Discord.gg

It's a very active community where you have the chance to talk to the developers directly and have your say in what you would like to see on the server! 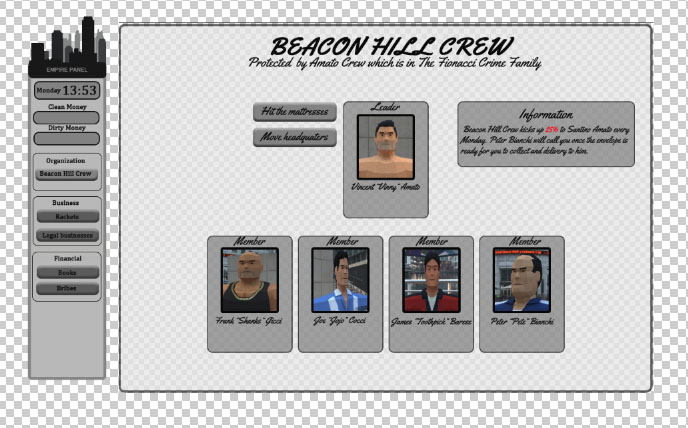 We can finally announce the feature that we have been developing and it has now left the planning stages and it's resting on the table of the programming team! This is the prototype feature that will be implemented in This Thing of Ours.

The feature will be like your personal assistant as no life of any wiseguy is easy! From the Empire panel, you will be able to control your crew and your empire. Let us explain some of its functions:

It's obviously still at the testing stages and this isn't the final look! trust us this feature will be amazing!

Programming team, as usual, pulling out some amazing features for the game, its an amazing feeling testing the game and seeing the map come to life each time. We have made a number of changes to the script to make it and feel as alive as possible adding those little features that will make a difference to the way the game mechanics work.

Some of the following features have now been implemented to the game:

After a series of meetings with the team, we have made an executive decision to make all-important interior fully enterable so there won't be no teleporting option when wanting to enter the interior.

The mapping team has also been hard at work trying to get what we call "Island 1" completed with full detailing added as well! Which means full features can be implemented very soon! Island 1 consists of 3 large areas Little Italy, Ghetto, and Docks which will all be area named soon!

Here is a small preview of the ghetto area that we have fully designed and are extremely close to finishing.