Let’s take a deeper look into the world of Alaloth with a brand new lore update. Today we’ll explore the heavens and meet two pantheons of gods. Begin your journey! 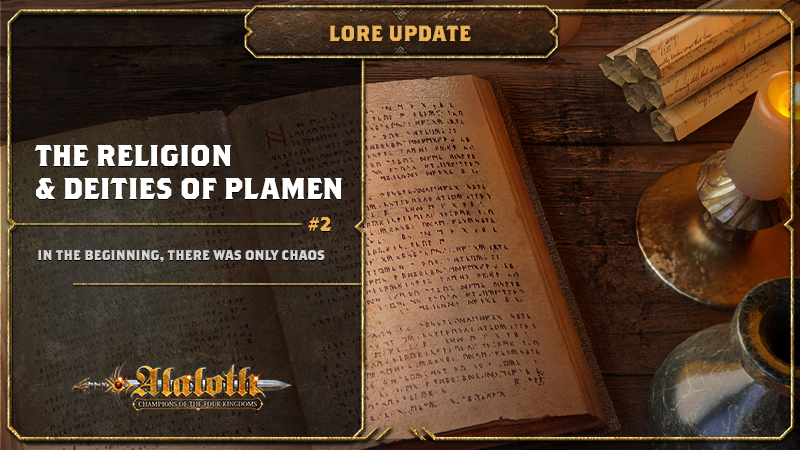 Let’s take a deeper look into the world of Alaloth with a brand new lore update. Today we’ll explore the heavens and meet two pantheons of gods. Begin your journey!

The Religion and Deities of Plamen

At the dawn of time, as the All-Father’s blood spilled onto the chaotic world of Plamen, the Gods, elements, creatures, and mortals were created. With powerful beings vying for control, the All-Father decided to gather them up into one institution under his control and thus, The First Pantheon was created.

For much of the history known to the mortal realm, the Pantheon was a peaceful and isolationist gathering of the Gods. There they would argue, fight, drink, and chant together, with no real plan of molding the world below them.

Only a few took interest in the lives of mortals, while some sought solace in the lives of natural creatures. Bit by bit they helped the mortals by rewarding those they found deserving, but due to the rules imposed by the All-Father, they were forbidden from walking the earth and intervening in conflicts between the kingdoms in any way.

They continued like this for many centuries, until hubris took over and the All-Father broke his own rule, plunging the Pantheon into war against his own daughter, the Mother of Betrayers, and her son, Alaloth. 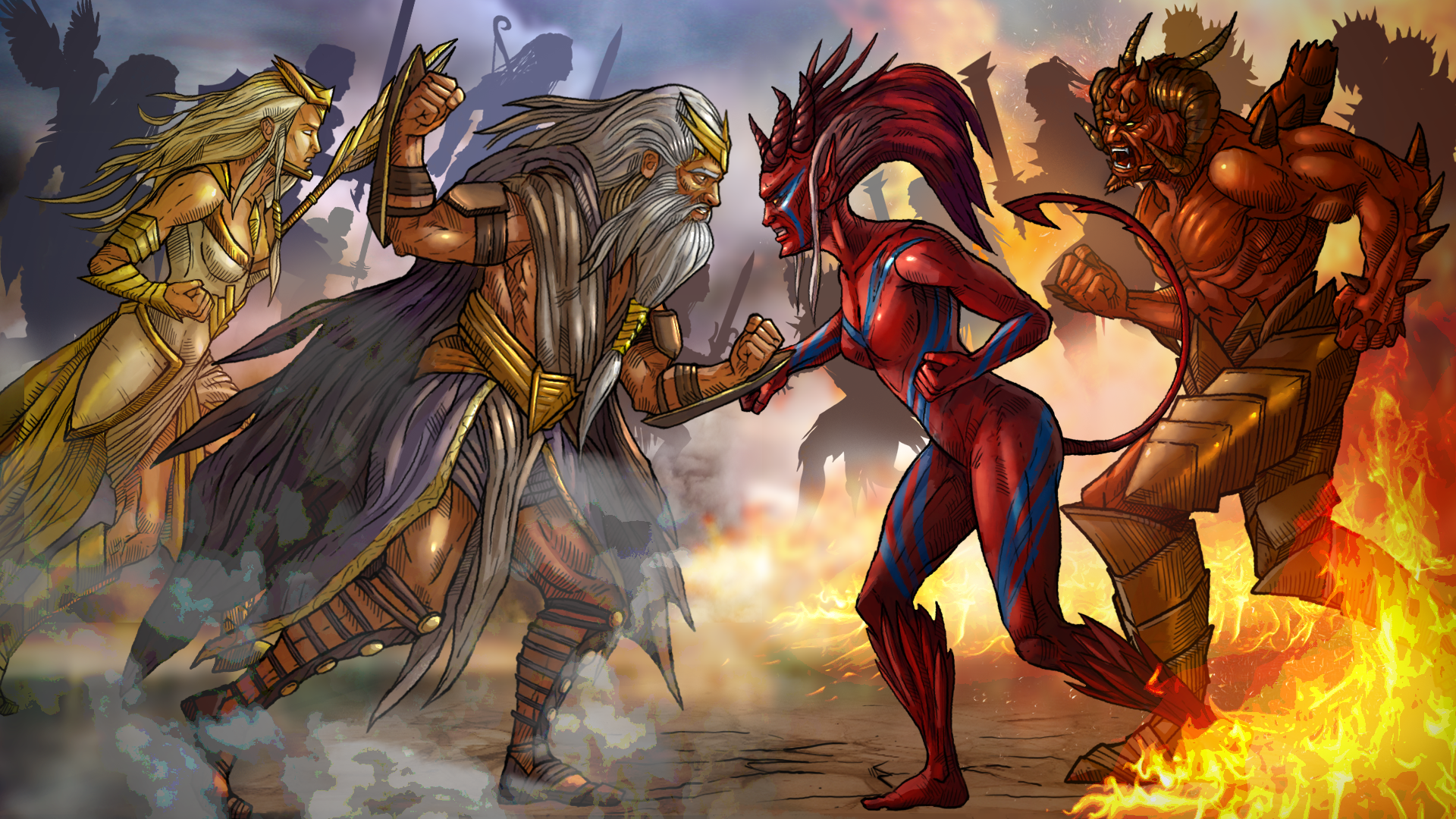 The All-Father: The father of all living beings from whose blood all creatures come. Once he was chaos incarnate, now he is chief over the Gods he created. The All-Father adored one child above the rest, allowing his pride and favor to blind him to his own mistakes. His confidence in his own powers has left the Pantheon defenceless against the attacks of the Mother and Alaloth.

Bingel, The Hawk: Once the goddess of the sky, she was injured by a spear of lightning cast by Alaloth that has turned her into a lesser deity. Since then she has taken the form of a hawk, becoming the patron of Watchfulness and decisive strikes. She awaits the day that she may reclaim the skies once more.

Boahi, The Goddess of Nature: One of the three children cut from the Earth Goddess during the Pantheonic War. She took over as patron of vegetation and wilderness, blessing the harvests and all those who favor nature.

Enh-Hohn: Lord of The Stone and of Karak-Hohn, the home of the dwarves, patron of stone crafting and the hammer. Enh-Hohn watches over the dwarven kingdom, assisting those that need his hand in their craft or their labor. He prefers to be close to his worshippers rather than stay aloof like the other gods.

Idaris, The Beacon: Patron of the humans and the shield that protects them, Idaris represents the spiritual and hopeful nature of mortal life. However, the recent tribulations of Edherest have changed the humans’ perception of Idaris to a war god, supposedly giving them the right to commit atrocities.

Jaiha, The Earth Goddess: The shaper of the mortal realm, of nature, stone, water, and sand. She existed along with the All-Father as his blood spilled upon her realm. She is a kind and naive soul who favors the creatures of nature and the elves. Since the Pantheonic War, her powers were split and created three children that took their own aspects of nature. Using her naivety and weakened state against her, the God of Deception is manipulating her creations without her knowledge.

Sei-Eld, The God of Nature: One of the three children cut out of the Earth Goddess during the Pantheonic War. He is the patron god of the elves, protecting them more than his mother or siblings, and represents a relentless spirit, always fighting and easily swayed.

Taine, The Huntress: Another one of the three children cut out of the Earth Goddess during the Pantheonic War. She is the goddess of the hunt, both of prey and of the abominations that Xis has unleashed upon the world. She swears to destroy anything that hurts nature.

Vaizmil: The Goddess of Light, a favorite to the All-Father. She cared for mortals too much and planned to give them a Fifth Kingdom that would unify them. Her actions led to her death at the hands of Alaloth and the Mother of Betrayers, and to the First Pantheonic War. She is the key to entering the Fifth Kingdom and destroying Alaloth.

Xis: The God of Deception, a two-faced skeleton. One face is his own, the other is the God of Truth whom Xis has absorbed. Using the face of the God of Truth, he manipulates the Earth Goddess to sow dissent and chaos in the world from behind the God of Truth’s back. He is helping Alaloth in secret, but also deceiving him at the same time.

Lauron: The Lesser God of the Tides, patron of sailors and pirates. Often prayed to when fishing or sailing.

Tutem: The Goddess of Beauty and Passions, patron of lovers and seducers.

Ulher: The Lesser God of Fertility and Marriage, requires worship in exchange for his blessing.

Rhid’Reklis: The Lesser God of Time, Patron of the House of the First Bells. It is not a sentient being, but the actual concept of time.

The Children: A deity with a hundred personalities, minion of the All-Father who fights amongst themselves to see who can worship him better.

Phidell: A minion created by Boahi to patrol the forests and keep watch over all natural creatures.

Ridal, The Crow: An aspect of Bingel that was split when she fell from the sky. Ridal takes charge of all the birds in the sky as he awaits the return of his goddess to absorb him into herself again.

Tutur: The God of the sacred stone. Some might dispute his rank as a god, but he is the personification of the stone that the dwarves use to build their halls and make crafts.

Alfiera the Guard: The Patron Goddess of the Guard Tower, an elevated mortal and servant of Idaris.

Somjiar: One of the first animals that walked the mortal realm and a close and personal friend of the goddess Jaiha. Somjiar is an enormous spider, but even with his size, he often passes unseen in the forests of the split kingdoms.

Ghital: An elevated elf who achieved a demi-god status as a result of her deeds and worship of the Goddess of the Hunt.

Rius: The Lesser God of Ruination and a loyal minion of Xis. Rius’ appearance is that of an amalgamation of many ugly abominations.

Iter’Il: A spirit of eternity, of a never-ending circle. It is attached to the Sei-Eld wishes and infects the elven people with waves of hostility and relentlessness.

Valyn: Keeper of records in the First Pantheon, a great supporter of Vaizmil’s quest, and a loyal servant until her death.

Born out of darkness and with corruption on her mind, the Mother of Betrayers founded a new pantheon in secret, just under the All-Father’s nose. The disdain she felt towards Vaizmil, the All-Father’s favorite, damned their relationship beyond repair and there was nothing to be done about her intent. The first of her pantheon was Alaloth, her first child and her second in command in her plan to usurp her father. The second to join her pantheon was Modut, who was weaker than Alaloth and thus was just a loyal minion. Together with many others and the Goddess of the orcs, Maraika, they planned and executed their attempt at a coup. After they weakened the gods and killed Vaizmil, Alaloth betrayed his mother and took over her Pantheon, driving Maraika and Modut away from him before he attempted to enter the Fifth Kingdom and found himself imprisoned.

The Mother of Betrayers: The last goddess of the original pantheon, born out of the All-Father’s shadow. The Mother had an ambition to rule over all the gods and, in secret, she created another pantheon, so that when the moment came, she would be able to defeat the First Pantheon and usurp the All-Father’s position. In the moment of truth, she was betrayed by her son, Alaloth.

Alaloth: The first son of the Mother of Betrayers and the greatest betrayer in history. Alaloth killed his mother and usurped her power. Thinking himself invincible, he attempted to cross into the mortal realm to assert his dominance there. But the laws of the All-Father stood strong and he found himself trapped in The Fifth Kingdom, spreading his corruption from within, awaiting his eventual release.

Maraika: The Goddess of the Orcs and patron of the Matriarchs of Baga. Maraika originally was part of the First Pantheon, but was loyal to the Mother at the same time. After the Mother’s death, Maraika abandoned her ambitions and returned to the Pantheon, looking for a way to take revenge on Alaloth.

Serlietis: The snake god, half mortal, half serpent. Patron god of all reptiles, including dragons, who see him as a father of sorts.

Martum: The God of the Underworld and The God of Death. Martum is not worshiped, no temples rise to his honor, he simply is.

The Forbidden: A group of children of the Mother who abandoned her when Alaloth betrayed her. They now follow Alaloth, awaiting the day that he is released, so they can follow him into the mortal realm and wreak havoc.

Modut: A loyal servant of The Mother of Betrayers since before the First Pantheonic War. He was the second son, the second member of her own pantheon. When Alaloth betrayed her, Modut went into a self-imposed exile, avoiding current events in mourning for his mother.

Xoluga: Patron goddess of blood-spilling, once one of the cruelest matriarchs that the orcish kingdom has ever known. At the time of her death she ceremonially burned herself alive with prayers to Maraika.

If you missed the first lore update post, explore The Known World & The Outer World here.

Be sure to check Steam every other Friday* to get an update on Alaloth’s development.The updates will give a general overview of in-game content, explain gameplay features, give insight into the gaming tech we use, as well as reveal other game related content. 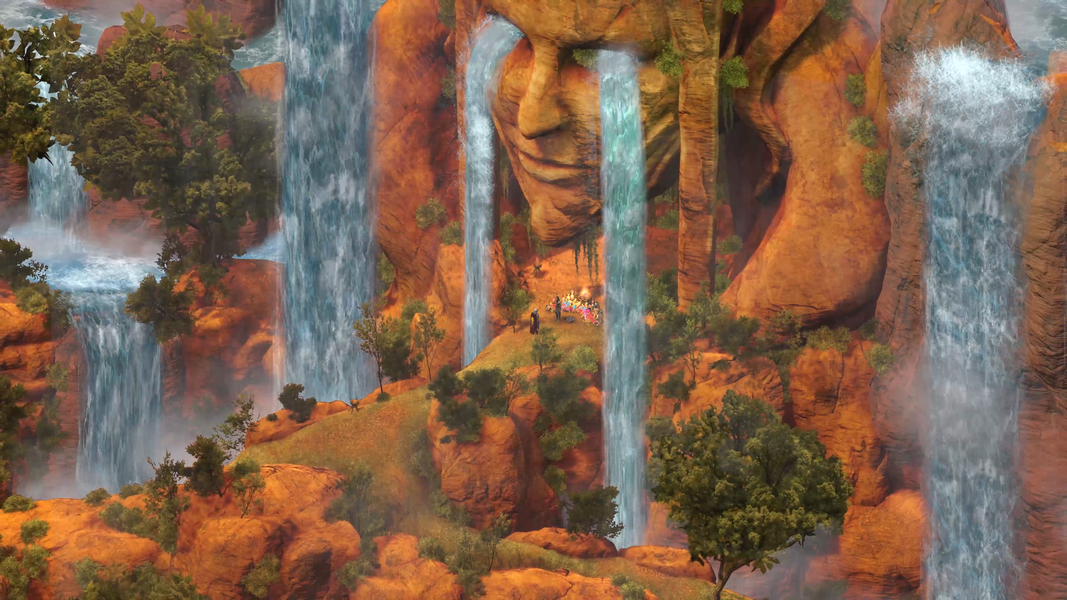