Final update for June - almost all the content for 0.3 is finished, and shortly moving onto bugs and tweaking.

Posted by UltimaRatioRegum on Jun 27th, 2013

The last week has seen more coding than much of the last month – having lacked the internet for the past week, very little else has been done aside from it. As ever, the release is a mix of things I’m making public before-hand and a few secrets I want people to find, but here the updates I can share. I’m aiming for release probably around late July at the moment, but it might get pushed into early August. The first half of July is almost entirely full with academic work, so we’ll just have to see how it goes. I’ll be doing a lot of playtesting towards the end of June once I have a pretty stable build, but ziggurats are looking all but finished. 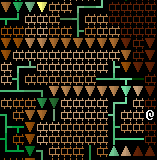 Puzzles are 100% finished. There are five “levels”, finishing off with “boss” level puzzles. Even when I know how to solve the puzzles, they still take me some thought. Playtesting it with people who don’t know how they are generated under the hood have found them so far genuinely challenging and really interesting to solve, so I have high hopes. They include a vast quantity of procedural art (something like 200+ images?) and over 300 possible puzzle permutations, and that’s not even counting the clues. You’ll have to play A Lot if you want to see even a small percentage of these things.

Ziggurats are 99% finished. They generate the entire buildings, all puzzles generate (as above), the structures inside and outside match up, dungeons are three-dimensional, which is to say staircases lead directly up and down, not to random points on the floor above, and some areas can only be accessed from floors above or below. It makes for a really interesting structure to explore, and it’ll be all the better in the future once a greater variety of rooms exist. Special ziggurats also have secrets atop them, whilst by the end of tomorrow other ziggurats will have clues pointing you towards the special ziggurats if you’ve taken the wrong one. In the future these will be treasure rooms etc. Lastly, as well as “Look-up” graphics for blocks, I’m adding ones for doors, iron gates, and a few other things. They look pretty cool.

A basic inventory system is now in place. This is not what it will look like in the future, but suffices for the time being to deal with the few items now in the game. It won’t be redone for the release after this (probably), but certainly will once a decent number of items actually enter the game.Next update will be next Monday, and since I now have internet at my new place, they should be regular until release (I know I keep saying this, and failing to keep to it, but I’ll try). By this time next week, ziggurats should be totally finished and I should be onto bug fixing and optimizations. I’ve had a very crazy idea for hugely reducing save/load times I need to try out, amongst other things.

In the mean time, you can keep up to date on my devblog, Facebook page, or Twitter feed. The devblog is updated weekly or fortnightly on Mondays, Facebook a few times a week, and the Twitter roughly daily. Any thoughts, please leave them in the comments! Stay tuned...