This month I finished the new save game serialization code and ran some tests to validate the data. Tests are basically to save the game in memory every frame so it can catch any bugs that might happen. I feel much more confident now with this system, if something goes wrong it will let me know instead of silently failing like it was doing before. So that’s good :)

One other thing that is bugging me is the 3D controls to navigate and pick positions in space. I’m using a main grid plane from which all camera movement and point picking are done. This grid can be moved up or down to pick position outside the origin plane. That’s great but it can get tedious to pick a position close to an object out of that plane, like an asteroid for instance. So I’m now working on locking a local grid plane when hovering the mouse over an object that would overload the main grid. I’m hoping with these 2 schemes it will cover 99% of use cases. We’ll see how players react to these settings.

Here’s what the main grid plane looks like, the faded one is the origin plane. 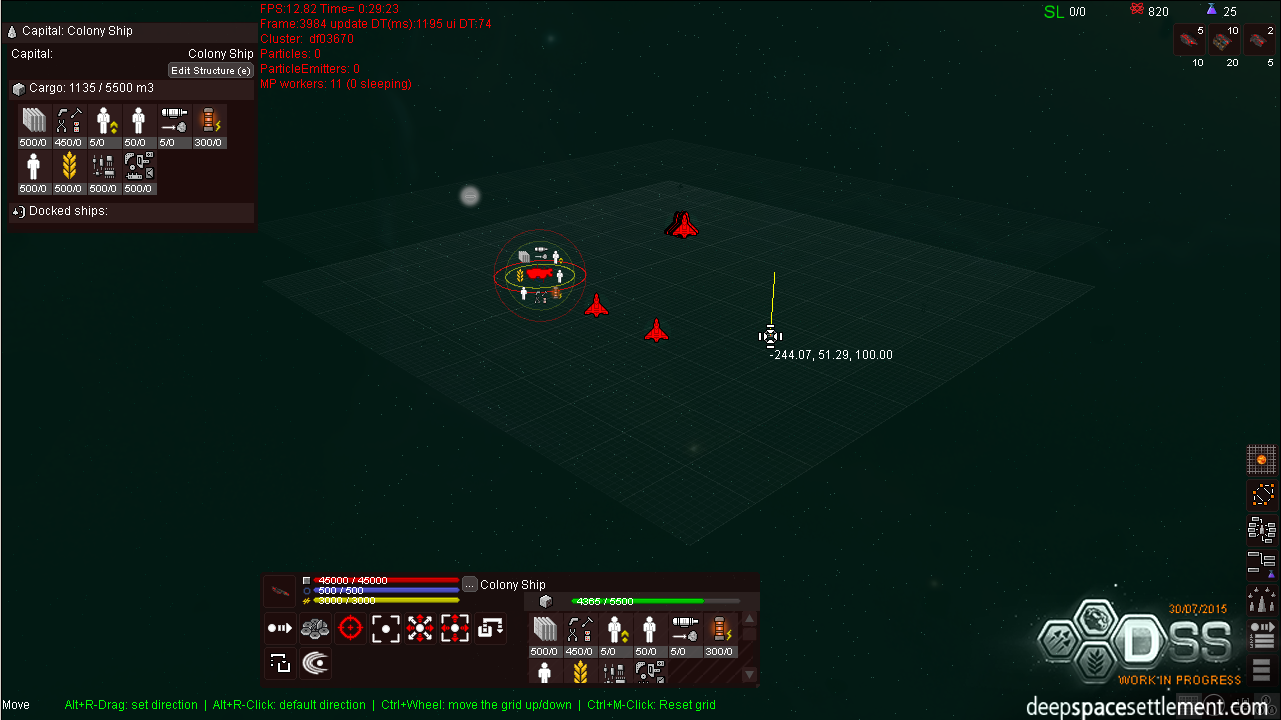 Last month we left off with the body/core of the drone completed. As a reminder, you can check it out here in 3D: Sketchfab.com

To complete a drone, you’d have to add at least a tail, which adds engines. Furthermore you probably want to add a nose as well, without which a drone would be of little use(but likely not completely useless either).

For now, there’s a mining nose and a repair nose. 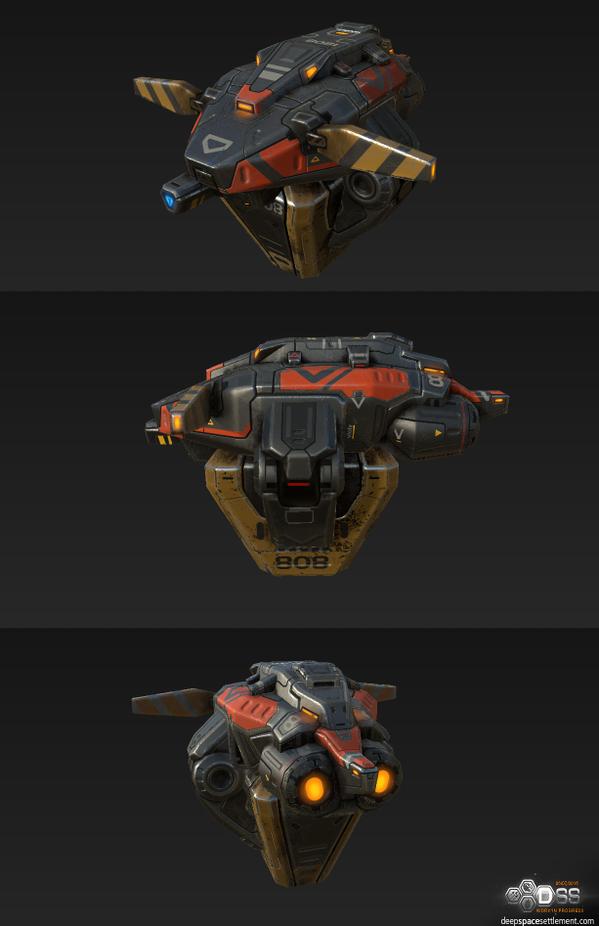 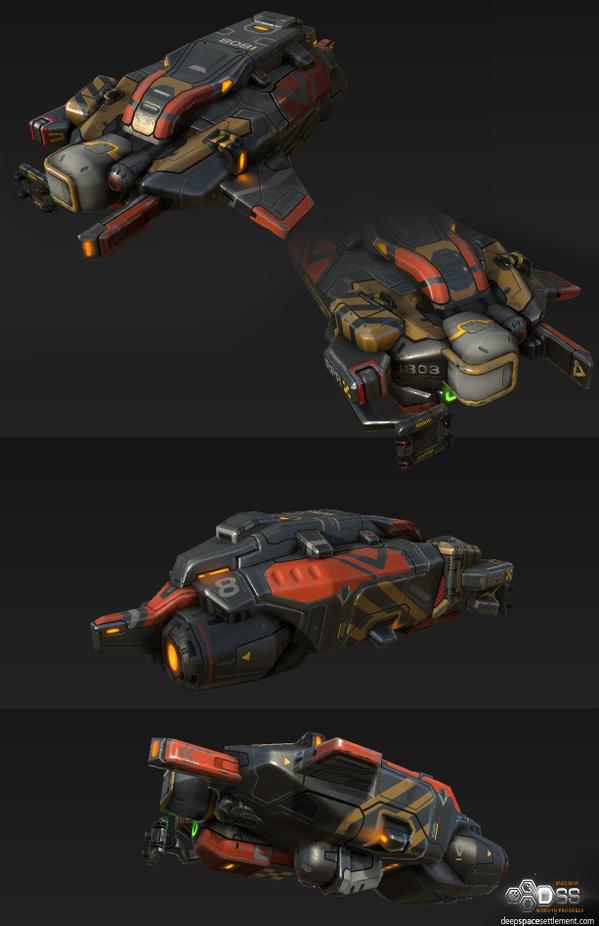 You can check both of them out in 3D as well: Mining Drone and Repair Drone.

Also, as a bonus, here’s the Mining Drone without it’s cargo box. It probably won’t show up like this in the game, but it was simple enough to do and who knows. 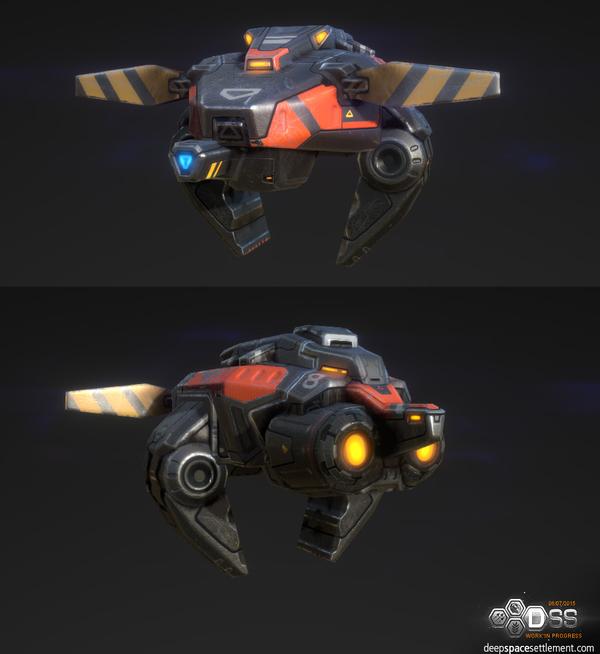 While building the mining front, I wanted to emphasize how small the drone is. I did so by playing up the cargo size in relation. This is also why I chose to place the cargo box on the underside, as it further suggests heaviness to our gravity accustomed minds.
This way it’s also very reminiscent of a beetle or bumblebee, which I thought was very fitting.

With the drones being done (for now), I turned my attention to corvettes, as Stephanie wants more diversity, more design options. It’s the first time i’m going back to a previously created asset and it is a lot of fun.
With most assets so far it’s been all about blocking out the bare essentials, getting the minimum amount of components you would need, but the plan for all assets has always been - and likely will keep being for the foreseeable future - to add more components to everything. More stuff to play with for the player.

I did some quick sketching to get some ideas out, focusing on different silhouettes for the most part. 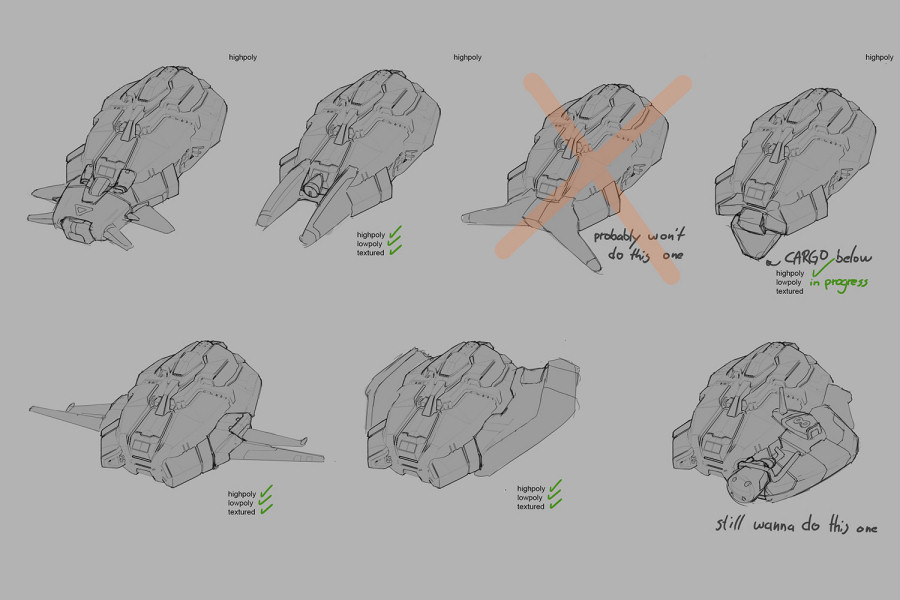 It’s pretty interesting how much the appearance of the corvette can change, by choosing different sides. For instance, look at this one: 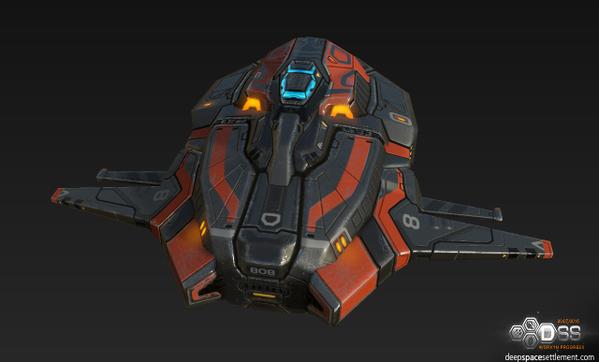 And compare it to this one: 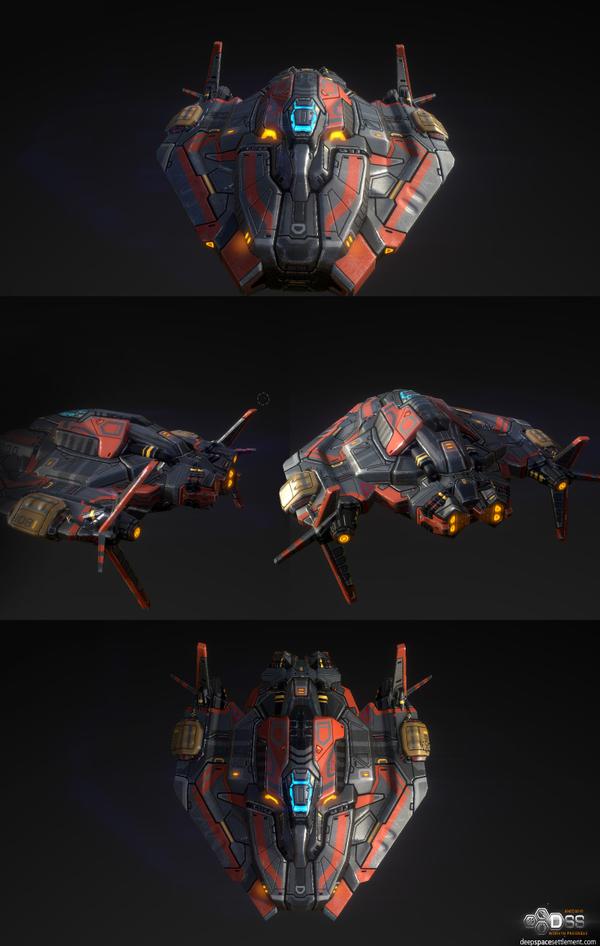 Of course, the prettiest corvettes will always be those with mirrored sides :)

Note, that the last one has small engines embedded into the sides. So far engines have only been a separate component to be added to the tail section of corvettes.
But due to the nature and flexibility of DSS’s unit design, any component can get any property. So a wing can contribute propulsion, if you want(as a modder). And so could a nose, for that matter.

This final image is pretty much where I left of this month. It shows the first of the new noses, which looks like it might have some kind of sensor capability :) 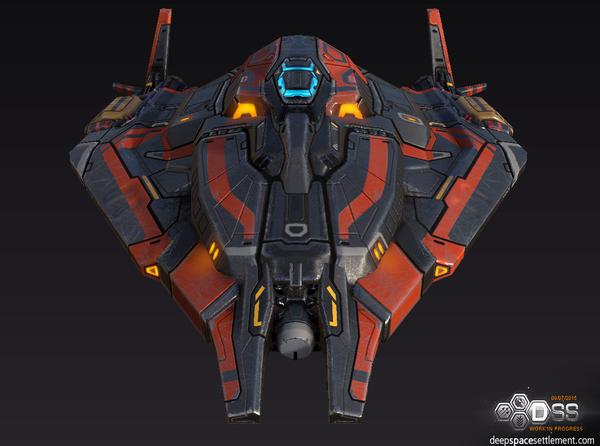 This is looking better and better, great job! Keep it up!

Great to see the progress, keep it up