So with enough concepts and models floating around between us, it is time we actually started making them do something of mild consequence. That means I finally got around to rigging/skinning a model and started playing with the animations.

See, you can’t just click on your model and will it to move. Well, you can, but that gets 99% of people absolutely nowhere. The others are on hallucinogenics. To get a model to move, you have to create its bone structure, so when it moves, it knows what to move because all the vertices are tied to this structure that keeps the whole thing from falling into one tiny little mess.

A fair number of people I have run into are not a fan of the rigging/skinning process. I rather like creating the rig. I don’t mind the skinning. That doesn’t necessarily mean I am good at it. Which brings me to the area of most concern: making the model do what you want it to. Cause its one thing to do it. Its another to do it and it look good. The biggest challenge for me here is that I am not used to working with such a low poly count. So I am experimenting with getting the best bang for my buck in terms of polycount/animation-not-sucking-ness.

That being said, I have a screen of the Industrial Rifleman’s gun and the rifleman In all its half animated/textured horror. This is NOT a final anything. 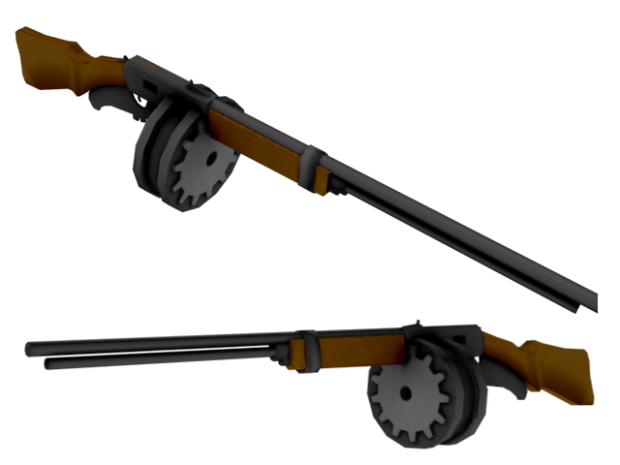 Nice work, keep it up!

It's good that you put that in-game comparison, because to be honest it *does* look a little clunky close-up, but frankly with the in-game perspective it's brilliant. I applaud you sir!

This is also a very early piece of work. Not only do I plan to go back in and tweak both the animation and the way the vertices move as a whole, but we may have to alter things later once the game reaches a more polished state. But The plan is definitely to make it better than it is now!