Dirkson explores some similarities and differences in related genres.

Minecraft is a pretty swell game - It's a ton of fun, and it did a lot of things really well. We've used some ideas from it in our game - Intuitive landscape editing with left and right click and an alpha funding model, among a couple others.

But I'm constantly asked whether ScrumbleShip is a Minecraft clone. I mean, we're both voxel games, and Minecraft started that genre, right?

Nope! Minecraft isn't voxel, and ScrumbleShip is. And that makes a HUGE difference. 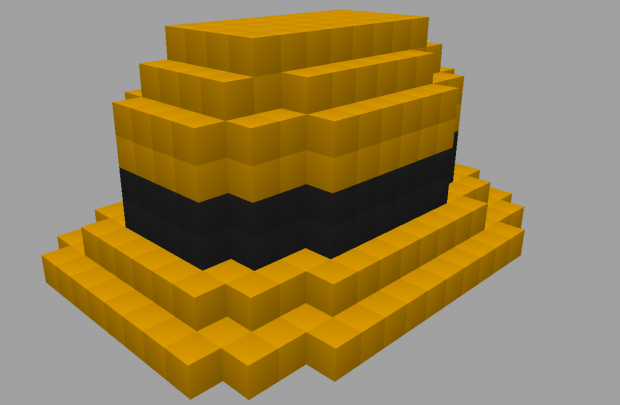 My hat rendered in orange and black voxels, with lighting effects.

So let's take a look a Minecraft and see how it fares. We have a grid of blocks, and those blocks don't have any subdivisions, so they're the smallest divisions of their space. So far, so good - Minecraft is definitely volumetric. But each of those blocks is textured with a vibrant 16x16 image - Each block is minecraft is NOT colored the same way a pixel is colored, but is instead divided even smaller. So Minecraft IS volumetric, but uses textures instead of colors, and therefore doesn't use voxels to render.

Here's the trick: There isn't a single 3D texture in ScrumbleShip.

Each block in ScrumbleShip is composed of 16x16x16 tiny cubes, each of a specific color. Tiny divisions with an individual color? Why, that sounds like voxels! For every block minecraft deals with, we have to deal with 4096(16*16*16) voxels. An average scene culls from about 4 billion potential voxels to less than 100,000.

But it also means that we can do some amazing things that minecraft can't. Hit a block with a powerful weapon? Only the sections you hit fly off. Blow a hole in a passing clone? You can see white skeleton and red flesh inside. Smash an organic ship? Watch pieces of it heal before your eyes. 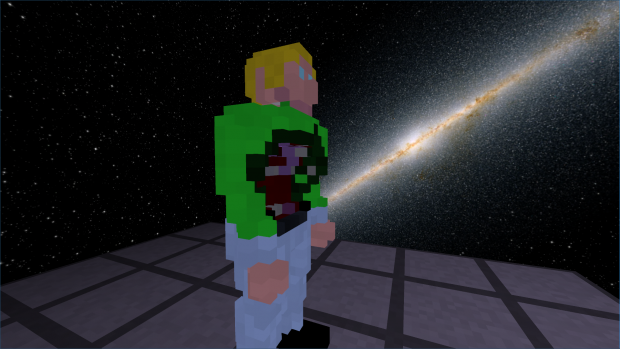 I think one of the major reasons we ended up looking so similar is that we both chose 16 - Minecraft has 16x16 textures on each block, and we have 16x16x16 voxels per block. For obscure reasons related to binary, 16 is a nice round number for programmers to deal with. We did originally try 12x12x12 voxels, but that turned out a little too ugly, as you can see in the example below. Every time you double the dimensions, you octuple (x8!) the number of voxels needed - A 32x32x32 block, for example, would require 32,768 voxels instead of our 4096! 16x16x16 was simply the smallest round number we could make look good. 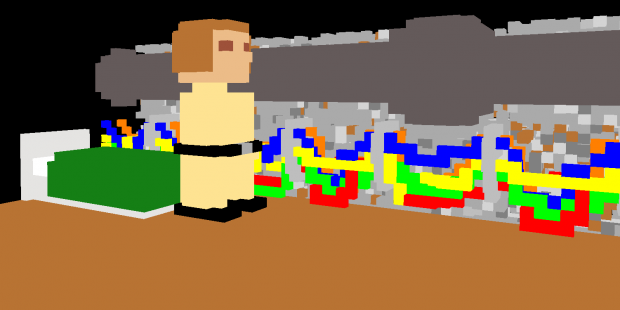 Of course this isn't the only difference between the two games, just one of the largest and least obvious. The large amount of real-life accurate simulation is a huge difference- I mean, how many game developers stay up past midnight researching the specific heat capacity for various types of Chondrite? (A material many asteroids are made of) ScrumbleShip has a focus on simulation and accuracy shared by few games, but I'll leave a full explanation of that for a future article.

" ...mean, we're both voxel games, and Minecraft started that genre, right?" :D sure... who can believe in this??? o.O Minecraft is a infiminer clon and infim. is not the first voxel game (I think). And a message from me to those, who btching about clons; remember wolfenstein, dune etc? So it means that all another fps, strategy games are just theyr clones??? (newer mind my english :D)

Yup! There's actually a LOT of points like these that I skipped over - This article is one of the longer I've written anyway, and adding in every detail I thought up would have tripled the length. Maybe I should do the other portions later, and make a series of articles?

Don't be such an accuser, Minecraft is ALL CUBES, this game is in voxels, and more than just that, as it also has OTHER pieces which are NOT Cubic, pyramidal shape, straight corners like as, not a corner of 3 laterals, but just 1 as if cutting the block in half, but no squary blocks.

So, this is a different generation ;)

I don't know much about voxels, but just because they're cubes doesn't make them voxels.

SS definitely has a more voxel feel than Minecraft.

Even RTS game have voxel in them.

I would try to not mind people comparing you to game X, which they sometimes claim you 'made a worst clone of it'; some do that simply to offend you, others because they are narrow minded and think their opinion matters and which they are smart.

Ignore them, and remember all the others who understand you(probably in great numbers), and even the mass of people who do not support the project, but have nothing against it.

@Guest - I can't seem to reply to your comment directly, IndieDB is being weird. Your comment may not be visible, and I may appear to be talking to my self.

The fact that Minecraft uses cubic volumes of space makes it volumetric, but the fact that each cube uses textures means that it can't be voxel. Voxel means something /very/ specific. Also, remember that voxels don't actually have to be cube-shaped - Look up "Marching Cubes" for an example of non-cubic voxels.

U was right, we can write a book about that article :) In faact it is good as it is. Smart people will understand and the "others" just not, (no matter how long will be the article) xD. Just go on and make us a good game ;)

Thanks for responding and making the correction! I think I'm using voxel in a more general sense that you are, but we probably both have better things to do than discussing that here.