Post news RSS Introduction to the World of Labyrinth

Backstory and concept art for Labyrinth. Join us on a journey from the cosmos to the world of Hylea where the City of Starfall now sits prominent and brace yourselves for the change that has already arrived. Plus take a journey north to see giants!

Posted by freerangegames on Dec 8th, 2015

For unknown millennia, the cosmos of Labyrinth was fixed, unchanging, and perfect. At the center of the cosmos is Hylea-- the known world, solid and unmoving. Swirling above Hylea are the heavens: other planes governed by fundamentally different laws of nature . Ascending above the Earthly Plane is the Spirit Plane where the dead relive their glories on the eternal battlefield, the Celestial Realm where spin the unfathomable worlds of ancient and mysterious gods, and the Elemental Plane, a realm of raw ever changing energy. Each plane is separated from the next by the Crystal Sphere. Each of these planes contains worlds of its own, and orbits around the center of the cosmos in clockwork harmony. 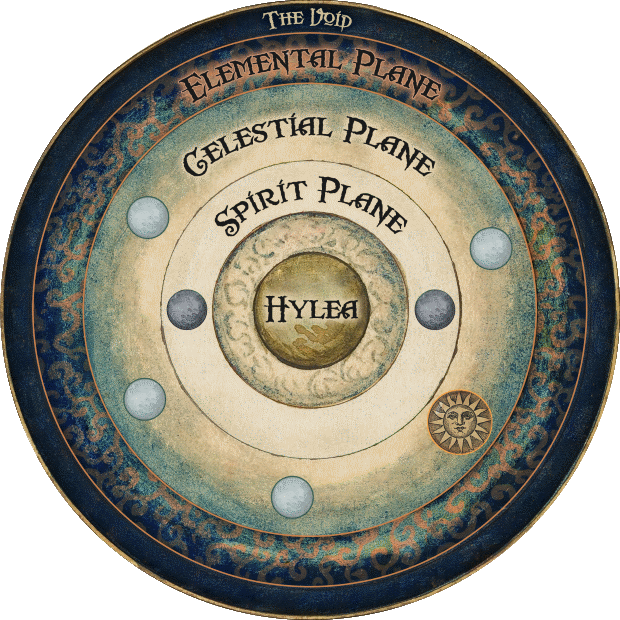 Three hundred years ago, this cosmic harmony ended in a moment, when a great object erupted unexpectedly from the Void, crashing through each of the eternal barriers of the Crystal Spheres, and impacting on the surface of Hylea. On lookers saw a great crack tear open the sky. As the farthest reaches of the realm shook with unnatural thunder, thousands of eyes looked up to see their peaceful night shattered into a shimmering prismatic storm. From a fissure in the heart of the tempest, a white star streaked, trailing fire and glowing brighter as it plummeted. Where it crashed to earth it swept into being an enormous crater that crackled and thrummed with otherworldly power. Where the barriers to the realms were broken, the realities of the different planes began to mix. Here on Hylea, the change was most dramatic, as the energies of all three planes collapsed together and crystallized into the essence of pure magic itself: a substance known as Stardust.

In time, the crater was filled by the water of the Jarum river, and became a great lake. The first visitors were pilgrims following the path of the star, which they named the Prophet’s Tear. They soon discovered that the site was laced with a powdery substance that granted strange and extraordinary powers. They also found the Keyrifts--tiny bubbles in reality through which they could peer into other dimensions. As word spread of these discoveries, a sprawling city began to spring up around the rim of the crater: the City of Starfall.

A robust trade in Stardust mined from the crater developed. Men and women came from distant lands and settled in the city's many colorful ethnic wards. Prosperity brought peace and peace ruled over the city for centuries. Now, the age-old pacts and alliances are breaking down. The earliest settlers have consolidated their power and look to push out rivals. Newcomers to the city seek to carve out territory for themselves. As night falls, a silent war begins in the tunnels, alleys, and halls of the ancient city. A sense grows that it's every Hero for themselves. 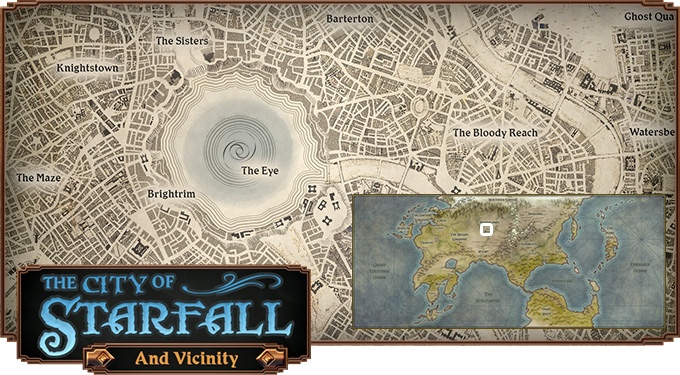 The Engineers' Guild originated in the City of Starfall itself. It is a secretive group organized around the pursuit of ever-more-advanced knowledge of the technical arts. As the use of stardust spread during the earliest days of Starfall, a group of brilliant pioneering inventors found that, if ingested, stardust could expand the mind and grant uncanny understanding of the physical workings of the world. Recognizing the inherent advantages that this afforded them, they formed a secret society to tightly control the use of stardust and the trade in their newfound knowledge. Over time, the Guild has established a monopoly on technical wizardry and developed ever-more-sophisticated technologies. 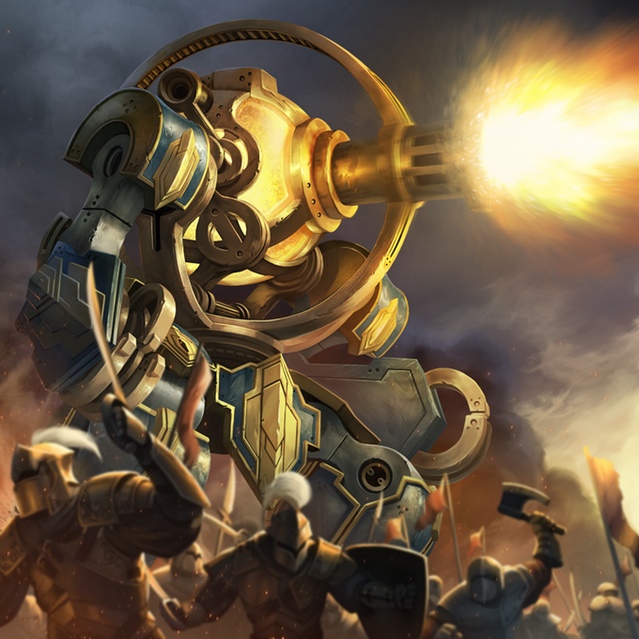 The engineers of the Guild are inducted at a relatively young age by scouts who are always on the lookout for promising potential members. This practice serves to strengthen the Guild, and also to reduce the risk of independent discovery of some of the Guild’s most closely guarded secrets. A lifetime of stardust consumption has a radical effect on an Engineer’s body, and their attachment to the necessities of the earthly realm begin to wane after a decade of constant stardust use. 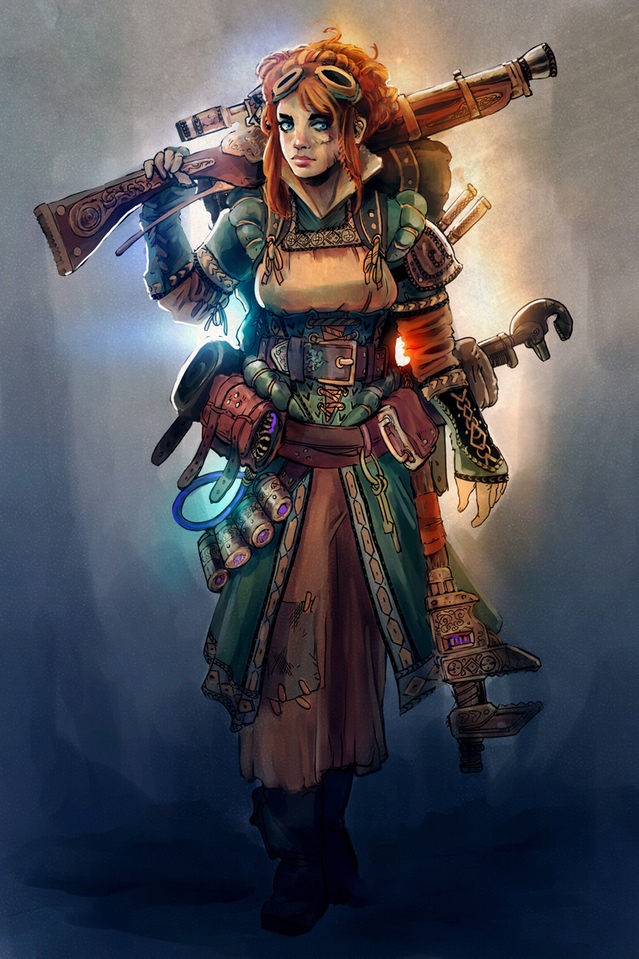 Though the secrets of the Guild are tightly guarded, some engineers have gone rogue, and used the technical knowledge gained through their apprenticeships toward purposes outside of Guild doctrine. The Guild sees such wayward associates as a threat to their supremacy, and spare no effort in persecuting them.

“Metamechanics” is the catch-all name for the construct servants that the Engineers use to communicate, conduct trade, guard their homes, and enforce their will. They are autonomous beings, part machine and part magic. The Engineers’ understanding of the earthly realm is such that each Metamechanic’s inner workings transcend natural, rational, physical laws.

Metamechanics take a wide variety of forms, but they are nearly always humanoid in some sense, for the Engineers in their isolation desire companions as much as servants. As the mood in the city grows hostile, more and more the Engineers exercise their arts to craft guardians, soldiers, and machines of war. 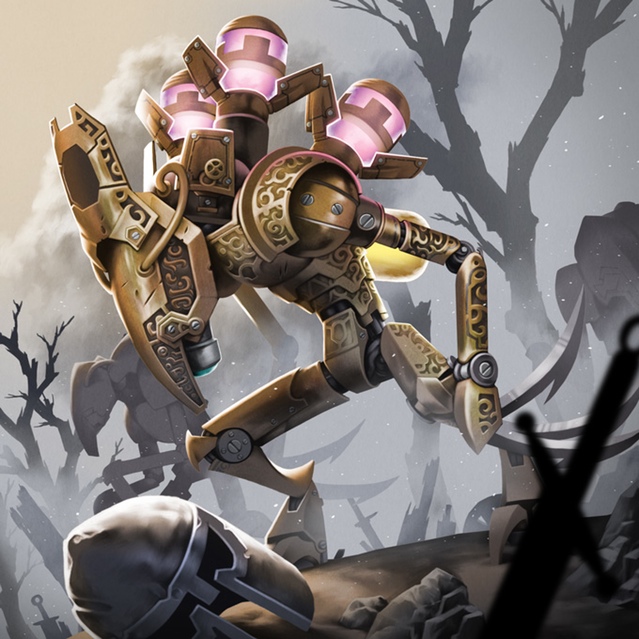 North of the City of Starfall are the Northern Wastes of Hylea, the abode of the Northern Clans, wild men from these boreal lands. Each clan is a confederation of smaller tribes of several different races of men--within the clans, ordinary men, Orgron, and Giants live side-by-side in a mutually beneficial arrangement. All clans are united by a single tradition of ancestor worship, in the belief that every spirit leaves behind a fragment that carries on through the next generation.

In this way, each clansman is directly linked via the spirit world to every other that bears their name. The Northern Clans are particularly savage. Most of their technology is purely practical, for the northern wastes are an unforgiving and difficult place to make a living.

The Orgron are huge, shaggy, horned and tusked men with a foul temperament and extraordinary strength. They are the result of a strange affliction that affects a small number of male children born on Garados. As they approach manhood, a sudden and incredible growth spurt takes over, and transforms them from frail boys into hulking monstrosities. For reasons unknown, this affliction is much more common in the Northern Clans, which know it as the Mark of Aki, in reference to the fabled original Orgron. 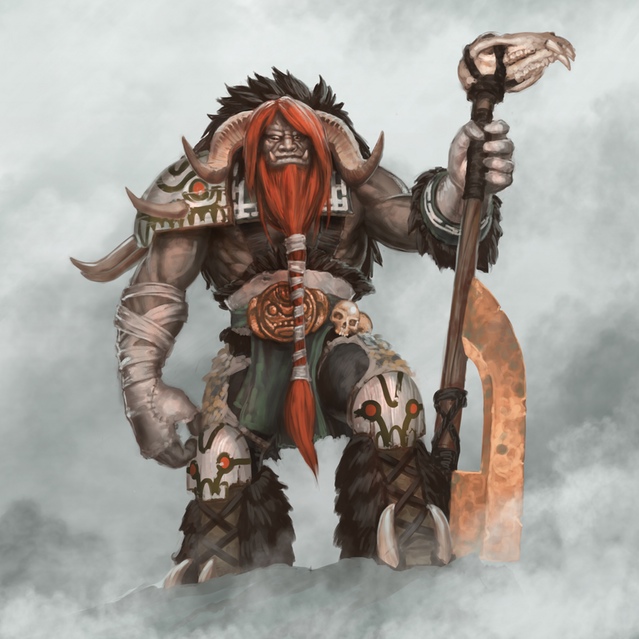 According to Clan legend, Aki was a handsome, proud, but vain hunter known for reckless feats of daring. One day, he set out into the sacred woods of the shaman queen Kalitha the giant, and slayed her prize orokk, the most magnificent beast in the wood. To punish him for his insolence and presumption, Kalitha cursed him with the aspect of an orokk, transforming his noble face into a hideous tusked visage with great curving horns, and turning his bronze skin into a leathery grey hide. Forever, she declared, his sons should carry this mark.

Giants are the largest race of humans. Unlike Orgron, theirs is a matriarchal society, with family groups ruled by a council of warrior women. Giants breed very slowly and are incredibly long-lived. They are also resistant to disease and difficult to kill--a typical giant bears scars from centuries-old battles. They live in harmony with lesser races of men through an exchange of talents. Giants are not particularly industrious, nor are they particularly inventive. On the other hand, it is always useful to have a Giant on your side in the event of a dispute with a neighboring clan. As such, Giants are the de facto peacekeepers within clan society, and as living ancestors, they are treated with great reverence. 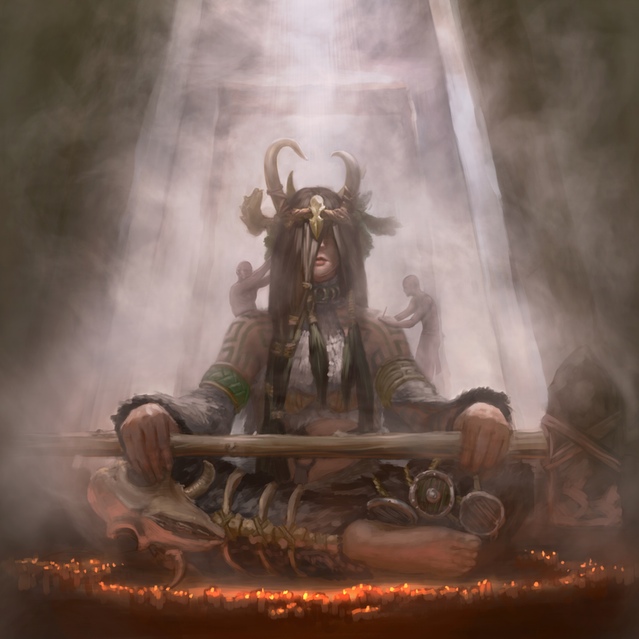 It is said of Giants that their stature and longevity causes them to see far down the road, and miss those things up close. This makes arousing a Giant to action, or swaying them from their course difficult in more ways than one.

We reach a scenic vista on our journey. From here you can look back on the Hinterlands towards the City of Starfall. As your gaze scans the horizon, you see the mountains that protect Shenjang and Karakuul, and to the west are The Beggar Kingdoms, Telacor, and The Central Kingdoms. Much more is left to explore in this land. So take a short rest, a deep breath, and march on to see what awaits!