An interview with a denizen of the fabled Castle Sin, who, as witnesses suggest, appears to be a sentient potato. Who is the mysterious talking potato? What kind of interview can be had with one? Stay with us and find out!

“Greetings, everyone, and welcome! Today we have the opportunity and honor to talk to a very special guest, someone who knows Castle Sin itself, which has given rise to so much rumor and hearsay about its creepy interiors and eerie inhabitants, quite well: the Steward himself. Welcome, Ghrelin. It’s a great pleasure finally meeting you .”

“The pleasure is all mine, I assure you.”

“Please tells us a little about yourself and your duties. I heard rumors that suggest you are… a potato?”

“Rumors go wild when you don’t interact with people often, don’t they? That’s one part of why I accepted this interview. That particular rumor is, as you expect, highly exaggerated. I’m only roughly one third potato. To be more specific, I’m a fine specimen of homunculus, if I say so myself, and the result of a recipe that included potato, naked mole rat, walrus tusk, and a blend of thirteen secret spices that I cannot reveal, partly because I’m under contract, partly because we’d lose a lot of good alchemists that try to duplicate my success. 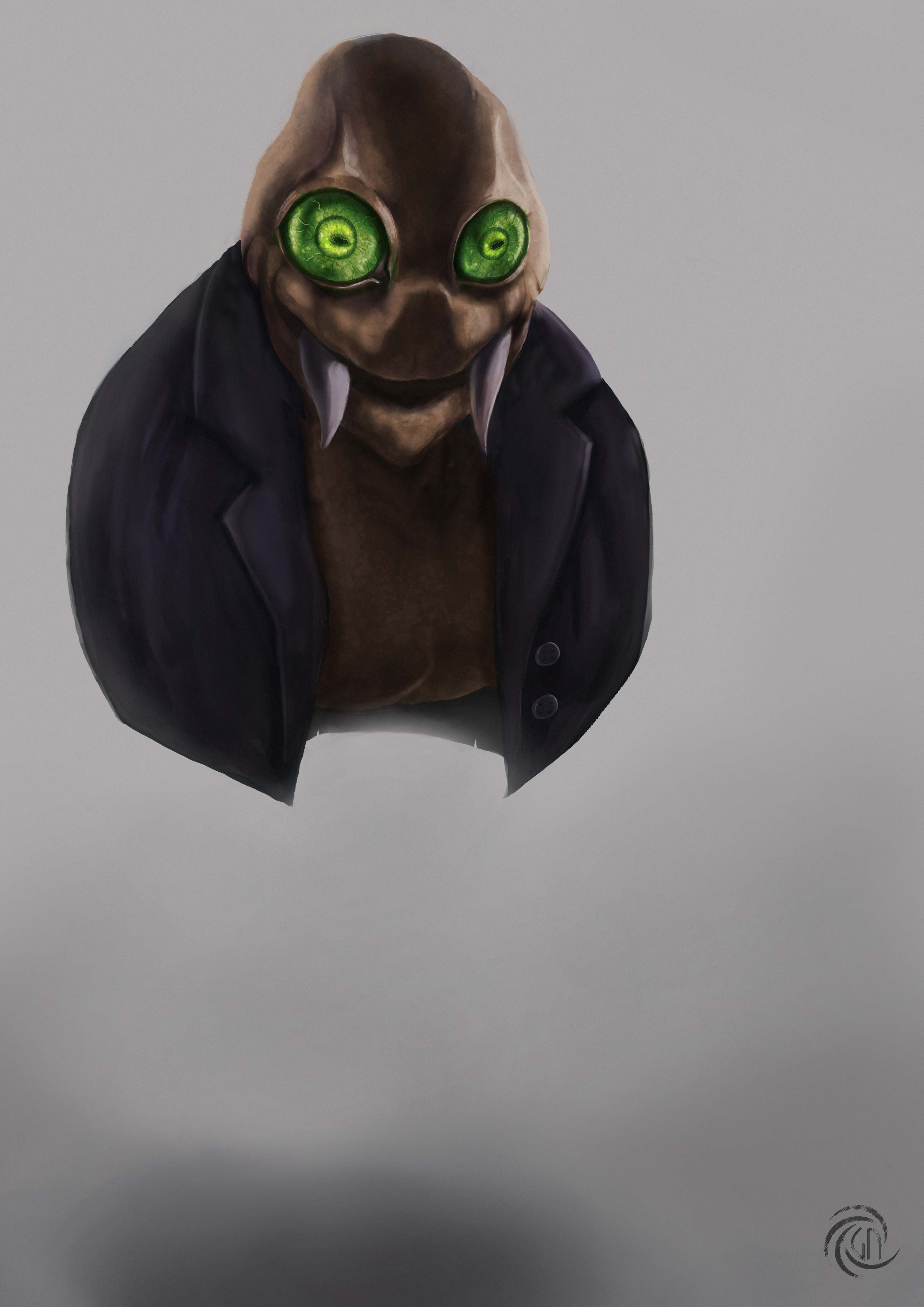 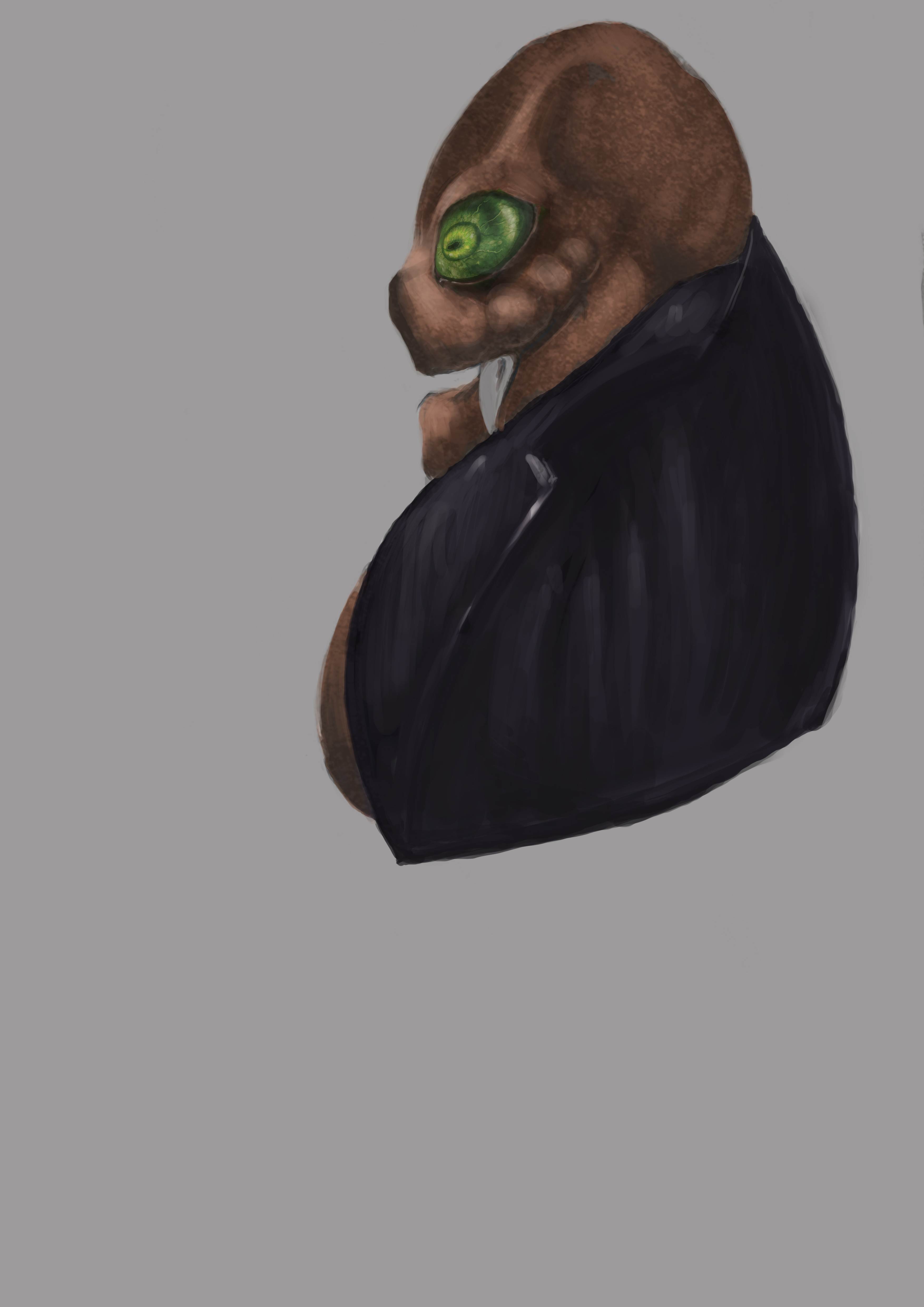 As to my duties, well, I’m the castle’s steward as you said. I make certain maintenance is up to speed, I direct the servants in their duties, and handle duties that are not performed by another, such as cooking, for example. I have a very unique process to “cooking”, of course, but perhaps I shouldn’t elaborate. An important part of my duties is overseeing renovations and expansions of the castle’s interiors.

In my little free time, I particularly enjoy appreciating literature, writing literature, occasionally painting, and sometimes singing. Better than the bulldog on all counts, for the record.”

“I have so many questions that I’m afraid we’ll run out of time, so let’s keep it concise. What can you tell us about the alleged beastwoman that was seen near Wraithrim from the castle’s whereabouts? Is she a resident?”

“Ah, you mean the lovely Lady Colleen Sangours de le Bouclier. She is a Beastwoman indeed; Ursidae, to be specific, and an amazing bodyguard. Not that anybody needs guarding, but she has impressive training as a Bulwark, and furthermore she has even been a Royal Guard. But, in my humble opinion, the most impressive thing about Lady Colleen is that she’s not a warring brute but a cultured, noble soul. She is loyal and committed, and dedicated to a fault – especially on tasks she considers important, which she never stops attempting until she succeeds. She’s a perfectionist, obviously, and although some would say it’s to the point of obsession, I consider it a valuable trait.

That said, she’s pure poetry in battle. She has enthusiasm, but tempers it with restraint and a tactical knowhow that allows her to perform with grace under pressure. Her shield, Coeur, seems to flash in front of every attack, even those aimed at her companions, and her mace, Blaknoir, is always at hand to punish overextending opponents. She feels like an insurmountable obstacle to any enemy of hers, I’m certain, and like an impenetrable bastion to any ally. She’s not all about group tactics, however. You could say she can hold her own in honor duels, but it would be a fair understatement; I don’t think she has ever lost one.”

“I am quite certain I know who to interview next, then.”

“It’s the second time you mention a bulldog. Please, elaborate.”

“Hmmmmnyes, okay, I suppose. Blood, as is his name, you see, is a very… vexing individual. The shape of a bulldog, I suppose, although the size, and demeanor, and smell, of a warthog. I must admit, however, that he has remarkable fangs and claws, perhaps reminiscing of a bear.

I know what you’re thinking. ‘This Blood sounds menacing.’ But he’s a vegetarian! The audacity! He cannot appreciate – cannot begin to comprehend, really – my fine cuisine! It’s almost as bad as his horribly butchery of poetry, although I suppose he gets points for trying. He’s nothing if not bull-headed. I mean persistent, but I think my animal analogies got away from me, apologies.

Still, I suppose you’re wondering why such a beast is allowed to roam in the castle. To that I reply ‘You evict him’. See, even though he’s short enough to bite where it hurts, Blood’s temper can rise rapidly, and goes through the roof when it does. And boy does he have anger management issues. Besides, there’s his approach to combat; I’ve never seen anything as brutally raw as the unleashed savagery he employs as a ‘violence deterrent’ or ‘peacekeeping motivator’. His words, not mine. What I see is a furious whirlwind of tooth and nail snapping at anything that stands in its way – he’s pretty quick when there are things to bite or tear. Plus, he has those annoying ‘stratagems’ where he attempts what he thinks passes for cute, like whiny eyes, tail wagging, and other despicable underhanded tricks that only the stupidest opponents would fall for, for when he bites more than he can chew.

He has an interesting choice of armaments, at least. It’s an enchanted version of a spiked harness, called a Cruor Harness, which also enhances his fangs and claws.

Just don’t let him hear you call it ‘cruel harness’ or any other misnomer. He calls her ‘Clarette’.”

“The castle’s denizens seem more intriguing than I anticipated, so far. Tell me, why ‘Castle Sin’?”

“This question is best kept unanswered, I believe. Most people tend to believe it’s a clever ploy to keep the curious away, but I tell you, more of those ‘curious’ are attempting to check if such a ‘ploy’ hides away vast treasures than are kept away. If anything, at least consider the obvious probability of being related to someone’s past.”

“That brings me to my next question, actually. You profess a steward, but anyone I asked called you a ‘butler’, which suggests a master. Is this master also the master of the castle? Could it be related to the enigmatic figure known as ‘Jinx’?”

“Don’t be absurd, Jinx is a clever story made into folklore by cunning storytellers. Few can even discern parts of the original story from subsequent embellishments. For example, many assume he is wearing robes, while he has ditched those for a black and white armor of silk and leather with hardened leather and metal parts.

Others claim he’s a master Arcanist, while he almost never uses arcane magic, preferring the Elemental forces. I suppose stories that mention he can use more than one Element, sometimes at once, aren’t that far off. And the mask! It’s a white mask with a rose over the left eye – as you see it. I have heard anything from a stylized carnival mask to an eyes-only rogue mask. Where do people get these ideas?

The floating is accurate, though. Makes it easier to keep things clean. Uh… I suppose, that is.

After all, we are talking about folklore. I do enjoy a good investigation of folklore origins.”

“Of course. But I’m afraid I have run out of time. Once again, thank you for agreeing to participate in this interview, and I hope the best for Castle Sin and its inhabitants. Please relay my regards to your master.”

Amazing interview indeed, well done guys, so little information about jinx though! He or she (you do not tell us even that!) is so enigmatic figure.