Check out the early concepts for CELLAR, read about the problems we faced and the lessons we learned.

Our team is really proud of CELLAR, you know? Sure, it doesn’t look like much, we’ve all seen better and we – its own creators – are well aware that our game is far from perfect. But it still got the attention we didn’t expect. Seriously! Going into Steam Greenlight (this time) was quite spontaneous, really. We were thinking like, c’mon guys, let’s be honest: we don’t stand a chance against those big games on Steam that get Greenlit within a few days, collecting thousands of votes on the way. Yeah, that just won’t happen, let’s find ourselves a rock we can creep under and maybe someday someone will notice us. But then suddenly, one day we thought – hey, it’s only a hundred bucks, where’s the harm in giving it a shot? And, well, you know the rest actually.

This still isn’t the most important thing, though. Sure, it’s really cool to see all the buzz around CELLAR, but the thing that we’re really proud of is that we just did it. We made a game. We created something from the scratch, we actually made something exist. Now, if this was a speech, then this would be the moment when my friends pull me off the stage saying stuff like, dude, chill, don’t get so excited. But that’s just how it is! Getting something done from the very beginning, getting through all the ups and downs, all the bad times – and oh yes, there was plenty of those – up until the end. The joy of creation is an amazing thing.

Now, as for the bad times, it’s worth noting that CELLAR wasn’t always the game it is today. Looking back at the old art, launching old builds, all that makes us think that this was a long year…

The original concept was very short. You’ve got your player dude, you’re standing in the cellar, you don’t know your way around and there’s a monster trying to catch you. You win only when you make it to the exit before the monster catches you. Clearly, this wouldn’t be a fair game – and we even wanted to make the levels random! But this was a start.

These are first concept for Lily (who didn’t have a name by then) and the Monster.

And here are the actual sprites that made their way into our first functional, non-prototype build.

Not only we lacked proper perspective for those (and they weren’t even slightly animated at this stage) but now it also seems that Lily used to be almost a teenager. And you’re probably wondering about the weird colours. Yep, that’s how they were. 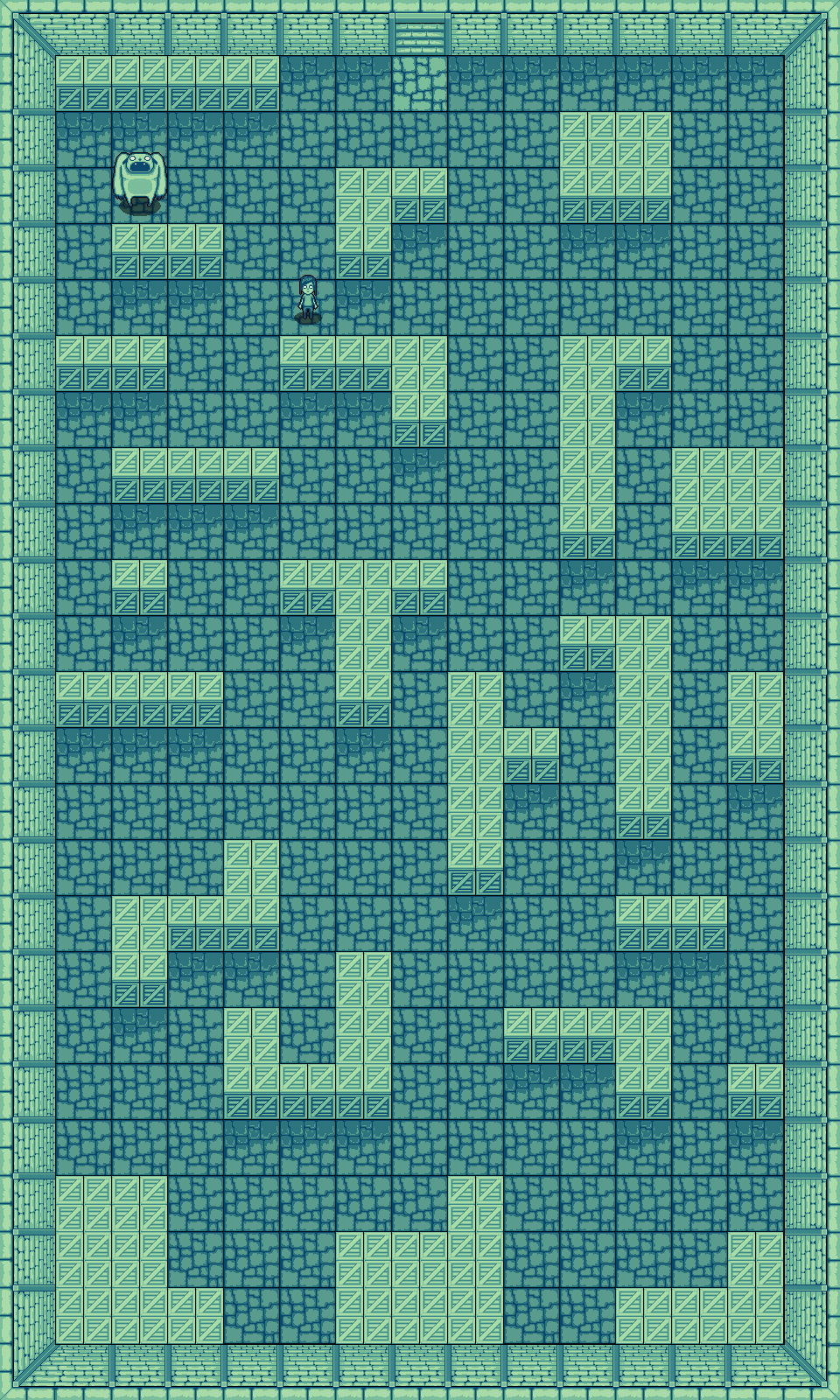 The original colours were very limited and we really thought this was a great idea – it helped to maintain clarity, it was very easy to tell the floor from the walls that way. At least that’s what we thought. And those angles – what the crap is with those walls?! But still, for about 2 months we were going like, yeah, it looks great! This changed when we showed it to someone else and he asked, what were we thinking. And the last thing is the size of the room. This one’s easy – we initially wanted to make Android our target platform. That’s a great idea, right? Our game requires only one hand to be played, it’s just perfect for smartphones! That said, we had now know-how, no Android, and no compiler at the time. After giving this some thought, we came to a conclusion that since we’re making this on a PC, then maybe… Yeah, good call.

So, after getting rid of the dead, cold, blueish colour palette and making the game look like an actual PC game – and even adding some features, like the darkness and the lantern – this was the result: 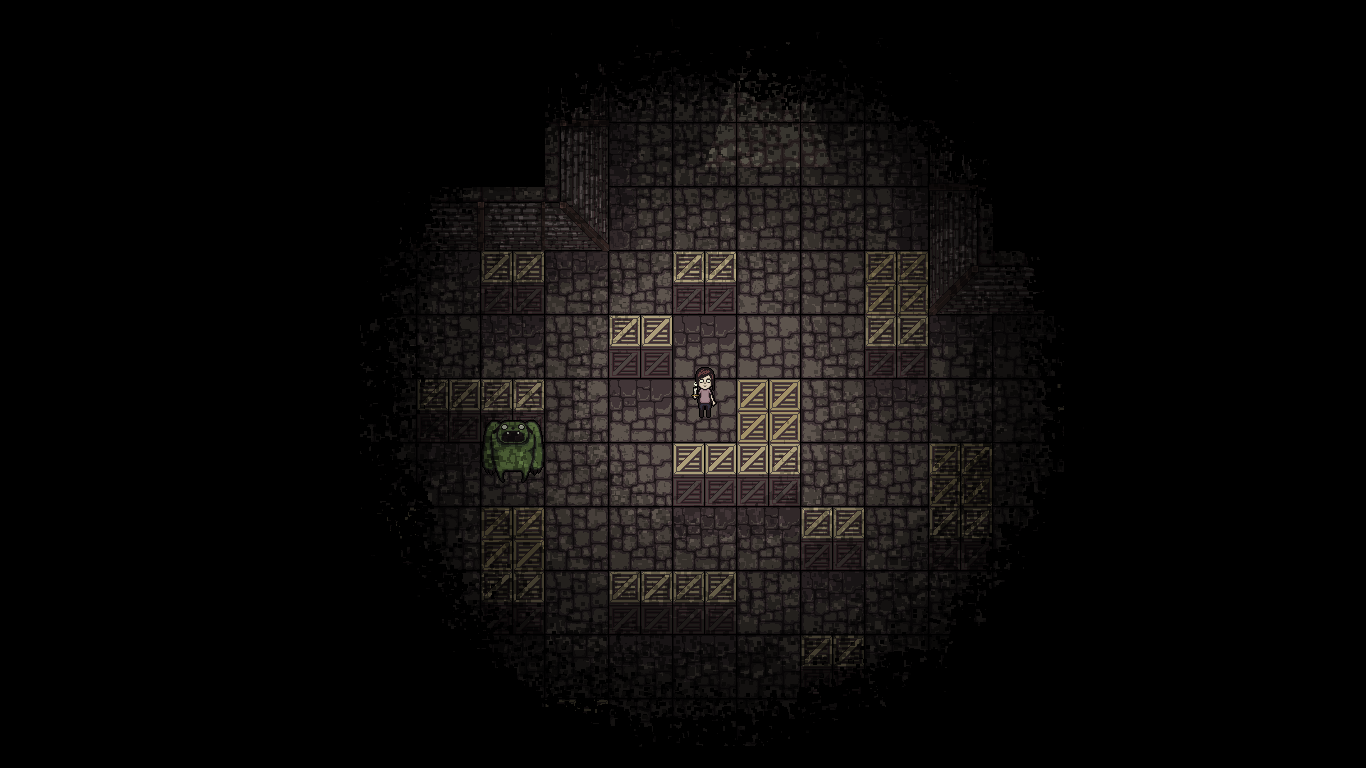 Holy crap, this picture still scares me. This darkness was The Darkness. It looks like a plague of locusts of death that swarm around poor Lily, just waiting for the tiny light to die before they jump to her and devour her. Not to mention this was eye-hurting after around 10 seconds of seeing this thing moving around.

In the meantime we were already thinking of showing our game to the world through Steam Greenlight Concepts section. Our demo level looked a little like this:

This must have been after 3 or 4 months of development (a lot less actually since we were both working full-time and only developed CELLAR in our spare time) and as you can see, we still haven’t figured out that the walls are off.

Soon after the new Lily came to life.

This is nearly Lily as you know her, although there was still a long way ahead of us before CELLAR became what it is today.

Like we said in the beginning, we’re really proud of making this game. But the whole process taught as modesty if anything else. There was so much stuff we didn’t know or didn’t even expect. We often jumped to conclusions and made rushed decisions only to get disappointed so many times. This is something that really gives you some perspective, you know? The lesson here is never to judge or criticize anything or anyone based on your assumptions and not actual knowledge, because you might not be getting a full picture.

thats a damn huge cellar :D considering I don't have one