In this blogpost, I describe how I am replacing my old graphics engine with my newly developed one, called Glux.

Hello everyone! It's happening... I have started implementing Glux in the real game. If you don't know what Glux is, [this video] will explain everything. And I am happy to say that things are going surprisingly well! I started with trying to replicate my loading screen, and indeed got it back pretty quickly: 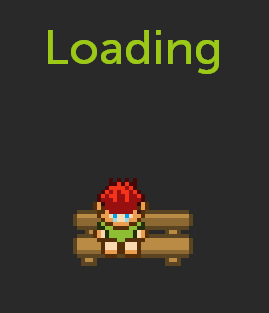 You can imagine I was pretty happy when I saw this thing pop up. Then, endlessly replacing old code with Glux code followed. At the moment, I can already click around in the starting menu again without getting any errors or weird graphics at wrong locations. This work will function as the basics for the actual game, which will of course be much harder.

Surprisingly, what turned out to be the most work is the text. In Glux, I completely redesigned the way text is shown. It's more more intuitive and easy-to-use now, coding-wise, but that means that every single line of code that has to do with displaying text has to be rewritten. I had no idea there was so much text in the game!

And, well... this is all I got to tell for this week. Like I said, I am replacing already working code with something that is easier to use and has more possibilities, but that does the same for now, so I haven't really got any new functionality or visuals this week. The only thing you might be interested in is what I am planning to do with this all. This is my current planning: