Building a playable and presentable game in one week is no joke. We attended the Epic MegaJam and would like to share our experience. Here’s how we accomplished it through scheduling, prioritizing features, coming up with the minimum viable product, and incremental playtesting.

Building a playable and presentable game in one week is no joke. In October we attended Epic Game’s biggest game jam to date, the Epic MegaJam, and would like to share our experience. Here’s how we accomplished it through scheduling, prioritizing features, coming up with the minimum viable product, and incremental playtesting. To see where it took us, here’s the gameplay trailer of our submission, Mind the Traps.

In the end you'll find the download links for the winners of the MegaJam. I highly recommend playing their games for your learning.

Half of our team had school or a day job, so scheduling was key to get us started and to ensure we would finish the game on time. We listed out the phases of development, assigned what needs to be accomplished in each phase, and allocated the number of hours to be spent in each phase.

Choosing an award to aim for helped create the framework for our game’s design. We wanted to make a game that we would enjoy making and potentially sell, so given our quirky personalities and love for multiplayer party games it made the most sense that we target the Addiction (most fun) award.

Games in the Addiction category generally focus on gameplay, as opposed to visuals, music or interpretation of theme. We came up with at least 10 different ideas and went with a voting system to filter the number of ideas from 10 to 3 to 1.

The selected concept was a "dungeon crawler, multiplayer party game. Players have no weapons and bump into each other into the darkness to figure out the path ahead."

The minimum viable product is the minimally playable version of your game with only the most important features implemented. The rest of the features that enhance your game are listed in order of priority to be implemented later. This is a risk averse approach to building your game that ensures you have a playable game that fits your vision and is ready by the deadline. 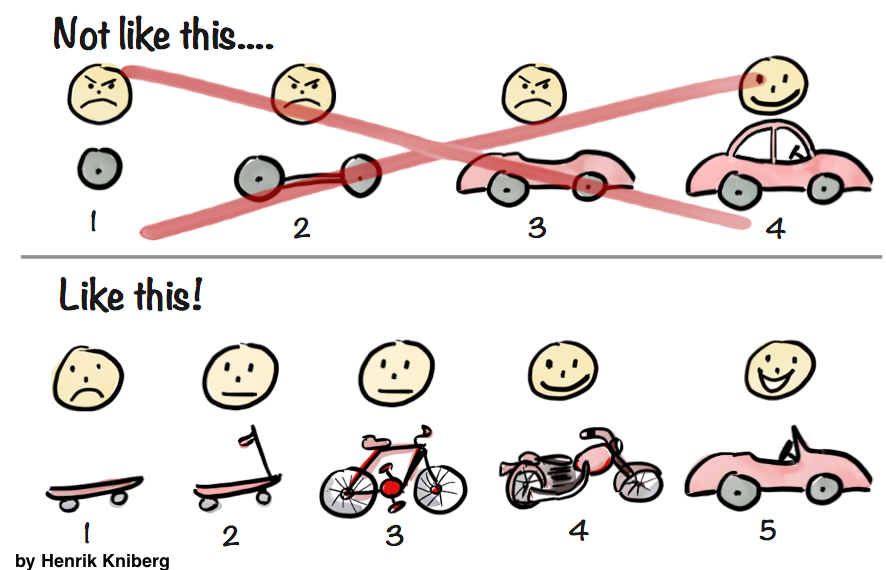 We broke down our game concept into a list of features arranged by "fun" factor and how critical it is to the gameplay. We included additional features that weren’t important but would enhance the game if we had time to implement them. The prioritized list of features were:

Here's why this methodology of prioritizing features and choosing the MVP is important:

Imagine that making your game is like an RPG: each additional feature you want to add is a new boss you have to defeat. If you come across a difficult boss that wrecks you, do you want to restart all the way back to the beginning of the game and lose all your progress? Of course not! You want to respawn at the previous checkpoint where you killed the last boss and keep all the items and upgrades you made.

The same goes for you and your game’s development. That’s why the MVP is so important to plan out this early on. The list of prioritized features is a set of predetermined checkpoints that ensures you’ll always have a playable game, no matter where you crash during its development.

Other benefits to this approach are:

We immediately prototyped the MVP with placeholder assets and playtested it with friends and family. We were told the controls felt solid, the gameplay was fun, and the player’s goal was immediately clear. This was a sign that we were on the right track, so we finalized the mechanics and cleaned up the code in preparation for making levels.

Since gems and traps were easy to implement, we included those as well.

It’s sometimes easy for playtesters to quickly judge a prototype the wrong way because it’s not visually appealing or because it’s not that fun. We had to remind them to focus and provide feedback on gameplay only.

We used an incremental build model, meaning we playtested and debugged each level as it was made. This proactive, versus reactive, approach was extremely beneficial because the incremental feedback allowed the level designer to create progressively better levels without spending too much time fixing the older levels. It also allowed the coder to take care of each bug as they popped up before it became too much to handle.

Our playtesting focused specifically on gameplay because we were targeting the Addiction award. We made sure each level was fun, challenging, not frustrating and able to be completed in a reasonable amount of time. The judges were going to look at over 170 game submissions in a week, so we expected their playtime to be around 30 minutes per game.

For level creation, we continued to use placeholder assets for everything (cubes for walls, cubes for characters, spheres for enemies, fire particles in the starter content, etc.).

Don't get hung up on small details. Our level designer was a perfectionist and would make sure each wall and platform were placed perfectly next to each other—no gaps allowed! It added up to a good amount of time wasted. In the end it's better to have a complete game with imperfections than to have an incomplete game.

Fortunately, we had an artist and musician on board who were already making assets halfway through the week. But because gameplay was a higher priority, we didn’t start incorporating the assets until level creation and playtesting were complete.

Last but not least, you have to allocate buffer time for a rainy day. Time and time again, history has shown that a game almost never finishes on time, so we took this into account and planned for an entire day of debugging assuming the worst-case scenario happens. How much buffer time you need depends on the scope of your game, skillsets, technical limitations and personal responsibilities.

If no last-minute issues pop up during this time, great! Utilize this free time to add the extra features that will make your game even better.

Although we didn't win, the game jam provided such a huge learning experience that taught us how to operate efficiently and with minimal risk. The process of scheduling, prioritizing features, planning out the minimum viable product (MVP), and incrementally playtesting is applicable to game development in general and not just in game jams. We hope you learned something new from our experience.

Listed below are the winners of the MegaJam. Judging is subjective and can vary between game jams; nonetheless, these were really well made games and are worth downloading for your learning. You can check out the other contestants' games on the Epic MegaJam forum.

I received approval from Epic Games to share these games.

Plus one year (or more) to learn how it work an engine...

My brother and I are engineering majors in college and we had very little coding experience (took 1 class on the basics). When we got into game development we spent about 3-4 weeks doing a whole bunch of Unity tutorials and managed to pick it up pretty quick. There are so many resources for gamedev online, including the huge community-driven forums. UE4 was even quicker because of their unique visual blueprint coding, which was designed especially for non-coders like artists.

A great way to start learning is to think of games you enjoy playing or want to make, then looking up tutorials that fit that genre. It's what helped us get started.