After 5 months of having this survey running, we received feedback from almost 1000 people. Read on to see what we have learned and what we have decided based on this.

After 5 months of having this survey running, we received feedback from almost 1000 people. Considering the "niche market" these types of games are generally considered to be, this is a truly impressive amount. Especially when you consider that for each person who did bother to take the survey, there must be several more who either didn't bother or didn't know about it.

From that, it can be concluded that there most definitely IS interest in an historical seafaring game done right.

The first question on the survey concerns in very broad terms the overall experience that players would prefer.

The first thing that is immediately apparent here is that all realistic options have received FAR more votes than the others. This is something that is further reinforced by the other results. It seems people really do want to see realism in their game, both historical and otherwise.

The other questions related to the game experience were more specific.
In the following graph, "blue" represents the average score people assigned to this item, while "red" represents how much people DIS-agreed with each other.

From this, it can be concluded that Historical Fiction is preferred over actual Historical Scenarios, though both score very high. Despite this, Pirate Clichés and Myth and Superstition do score very high as well, though are slightly more controversial.

However, ESPECIALLY controversial is "Relevant Fantasy Elements". On average, it does score very high, but on no other subject are the preferences SO divided. This is more obvious when looking at the individual score graph below: 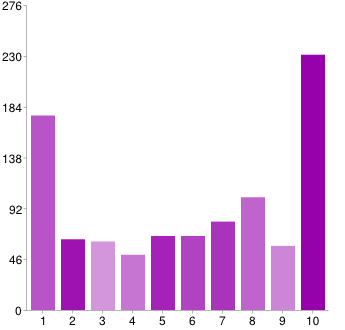 Basically, while just over half the people really DO want this, just under half REALLY DON'T. And when you get to "Extreme Fantasy Elements", the results become very obvious: While there are a few people who would appreciate this, the vast majority of people has zero interest whatsoever: 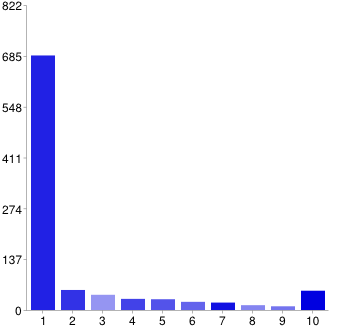 As for the hardware-related issues, almost 90% of the people taking the survey report that their computer is already able to run games with similar system resources. And for the people who can not, two thirds of them would upgrade their hardware just to be able to play a proper historical seafaring game like the one we are working on.

Again, that not only shows that system resources will not be a problem, it also reinforces the point that people really DO want to see a game like this.

So the above is all very nice and everything, but what does it mean for us?
In other words: What will we DO now that we know this?

1. There IS an interest in such a game, so it is definitely worth pursuing further.

2. Realism is considered very important, so that is where we must initially focus our efforts on.

3. Pirate clichés and fantasy elements would be welcomed by many, but definitely not all. Therefore once we get around to adding these, they must be completely avoidable as well.

4. On the hardware aspects, we have decided that we will include DX11 compatibility and aim for future-proof visuals.

Of course the above is just a short summary of the results.
To see all of it, have a look at the full form here.

I didn't know a survey was running, but I am interested, just throwing that out there, so you know :P

I certainly voted for a more historically-oriented sailing simulation. There are more than enough fantasy games out there. Pleased to see that others feel the same way. :-)

Would buy the game just to fund something I'm not even that much interested in. I just feel like we need historically accurate games!

I wasn't aware of the survey either but I would love to see this game. Can I volunteer for beta testing ;)

I'd go along the lines you went with Pirates of the Carribean: give us lots of freedom on seas and quite a few options on land. I really liked having my own island/villages and being able to expand my business as well as plundering/damaging my enemy. The whole running a business aspect is interesting to me. If it is pirate business or rum and spice trade isn't that important to me.

That makes me think, since the game is multiplayer, there could be clans or factions, so you would automatically have standoff situations, just because some chose pirates and others merchants. Add the different nations with their shaky alliances and you get something massive. Like GTA on seas - complete with multiplayer. A sandbox game.

Once again, i agree with the results (except the computer stuff.. i have no monies to upgrade q-q but i guess ill see what i can do)

Also you should totally put some ideas together for later on making a total fantasy steampunk game. Airships in the age of sail would be boss as long as it was believable.

And ofcoarse i do love the way the results came out. I get the feeling that this will be like one of the several pirate story/book/movie/ect out there where they are in a realistic setting, but at one point or another they end up having something that happens that has absolutely nothing to do with the plot (like ending up on a ghost ship, or landing on a ghost island, or mermaids tempting sailors, the kraken attacks, ect.) One could easily fit small tales like these in since there were several stories of these being told during that time.