We are working in the to improve our gameplay and art design. Some concepts that we are introducing are older concepts that were removed previously, such as naval combat; other ideas are new, such as rooftop access, shatterable building windows, and multiple refilling stations for helicopters.

New Naval Logic
After a long hiatus, there have been reports of Soviet submarine sightings along the coast. 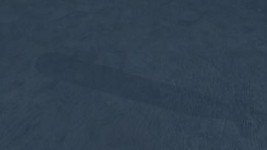 And while we're on the subject of helicopters...

Helicopter Refill Pads
Chronojam mentioned in a previous blog that we will be implementing new refill pads for multiple helicopters to refill simultaneously. They are not required to be destroyed for a team to win the game on a map where base-destruction is the objective, and they do not let you build helicopters. Helipads themselves will still be serving the same purpose as before. If your helipad is destroyed, however, you will still be able to refill your helicopter, provided one of these guys is still alive.

They are now functional ingame. Here is what they look like, mid-animation: 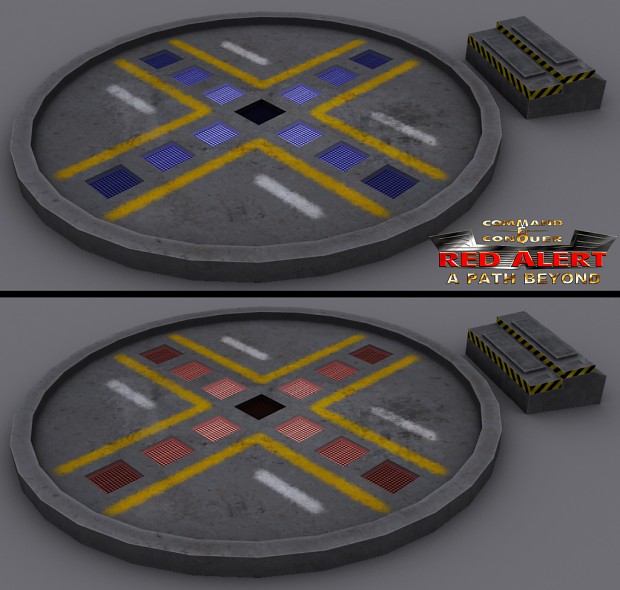 And here is a video preview of how they behave ingame:

All our building interiors, which were previously available only in the dreaded gmax format, are now fully available in 3DS Max for the mapper's editing pleasure! I will see what I can do to get these included in the next SDK release.

Most of our buildings now have ladders, which make their rooftops accessible. This will eliminate the need for the "no transition zones," which were used previously to keep players from exiting their helicopters and exploiting the rooftops to give themselves an unfair advantage.

It also provides extra tactical routes and strategic paths of attack and escape. Whoever is taking care of mine laying on the Soviet team may need to pay extra attention to the bases of ladders!

Additionally, standing on the top of a roof can give you a nice view of things in the distance, if you need to scout.

Here are a couple shots of the building modifications that come with ladders. 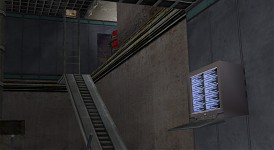 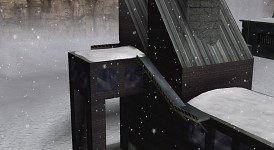 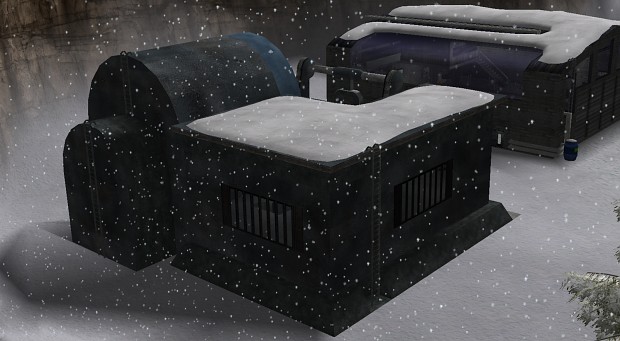 This topic has been touched upon in a General Discussion poll about War Factory glass. If you haven't seen it, make sure you check it out!

Small doors, big doors, elevators, cranes, you name it! You can now damage buildings when you shoot at these parts. 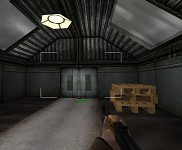 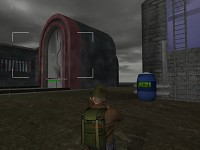 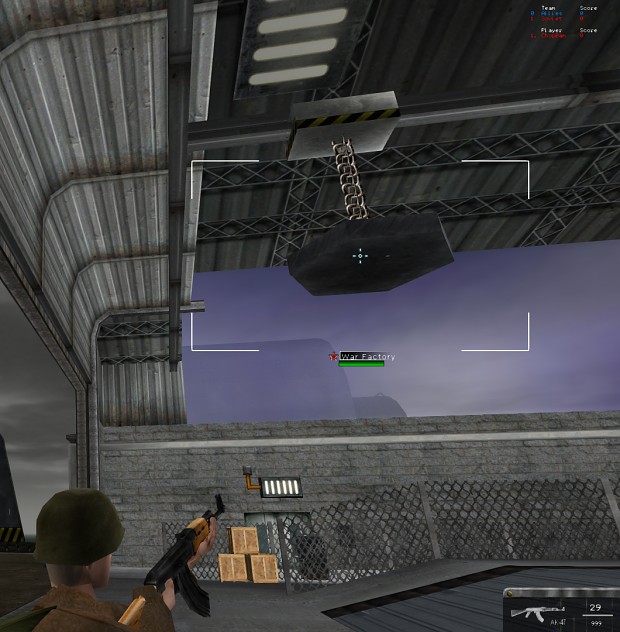 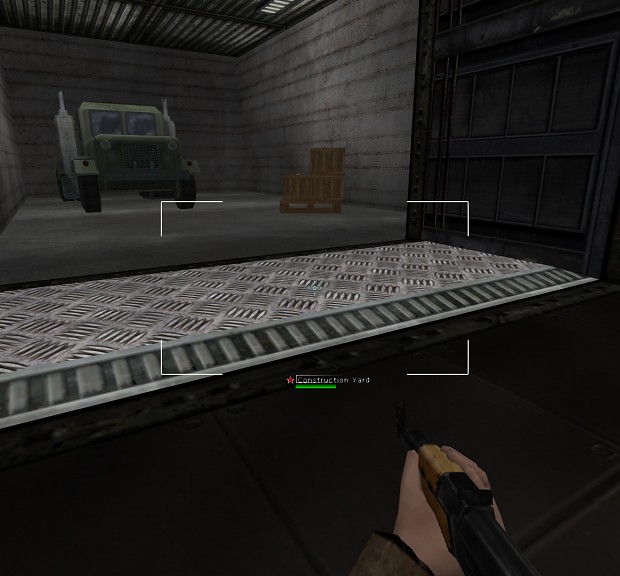 Even that big missile silo door is targetable now. What started out as seeming like a simple fix actually turned out to require a whole new missile silo controller from Tiberian Technologies. 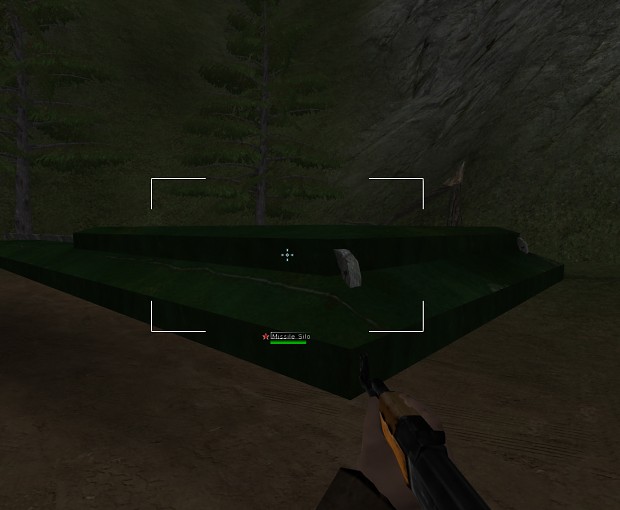 Our buildings are now entirely proxied on maps. Any mapper will know what this means, but I'll explain it for the laypeople whose attention I somehow still have.

I'll explain it only within the confines of our w3d project. A proxy is an object the mapper places in 3DS Max that references a preset. For example, all the building doors, elevators, lights, spawners, and purchase terminal "poke" objects are proxied. The building interiors themselves have been proxied up till this point, and they contain those other proxies. If there are many instances of a proxied object, it is easy to update those instances, since the mapper will only need to export to the presets once, and that preset will propagate itself to all the maps which have that proxy object.

The news here is that the building exteriors are proxied. They are no longer part of the terrain. There were also some extraneous building files that were set up separately, and they didn't need to be. All of these have been merged into the larger building object that is now proxied. This will let us do much faster fixes and updates to the buildings, without having to manually and painstakingly bring those changes to each map.

The RA_Buildings.max file in the SDK contained all the building terrain objects that a mapper would merge into maps. Naturally, I've updated this file with all the proxy objects, and added some extra proxy objects, such as defenses and support. Here is a screenshot of the new ra_proxy_masters.max file. 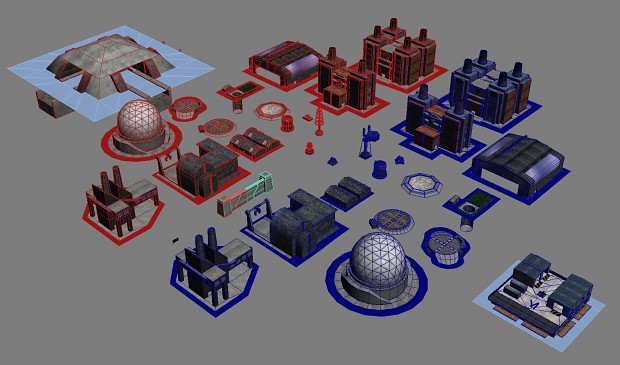 To be a bit more technical, multimaterials have been significantly reduced on the buildings (a multimaterial is when one mesh has multiple materials, and it's not optimal to use these, for the way our game works).

This one's minor, but many meshes have also been detriangulated, as it presents a much cleaner look and allows for better "quadforming" within one's mapping workflow.

Map Changes and Fixes
This list is ever growing, but I will share some of what has been done so far.

The bases have swapped locations. The helipads have been removed, and power plants have been added in their place. Multiple service depots provide support for the expansive bases. 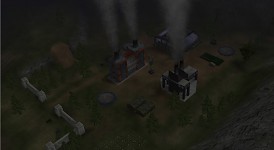 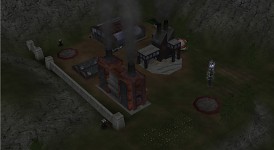 The falling platform behind the Allied Barracks is now set up properly. Now, when a player gets close to it, it animates a destruction, so that players can't walk out of the desired play area.

An Ore Silo has been added for each team.

Every map .max file now points to textures in always.dat only. No need to turn everything into .tga files anymore, hurray! :) Speaking of that, I will try to get more maps into the next SDK.

Maps will now feature a new "out of bounds" warning/destruction feature. For those of you who participated in the open testing and played on RA_Siege, you might have experienced this same system there. Here is a simple video demonstration of what happens when you venture out of bounds.

There will now be no need for mappers to use temps.ddb, since the temp presets are now built into one of the level files. This means you can bring all your different maps that have different temp presets together into a single mod project, and still have your temps intact. It's just a part of the cleanup we've been doing!

In Conclusion
Check out the full blog post on our site to see an old render of a new house, and maybe if you look carefully, you'll spot some wine along the way!

Holy ****, that's a lot of major changes there! Keep up the good work guys, this game never fails to surprise me.

Thanks fellas! Additions, fixes, and changes will continue to come.