Post news RSS From the dev blog: The Infection

The most recent blog post coming from our Developer Diary. Here we talk about the role our infected play in Solarix. 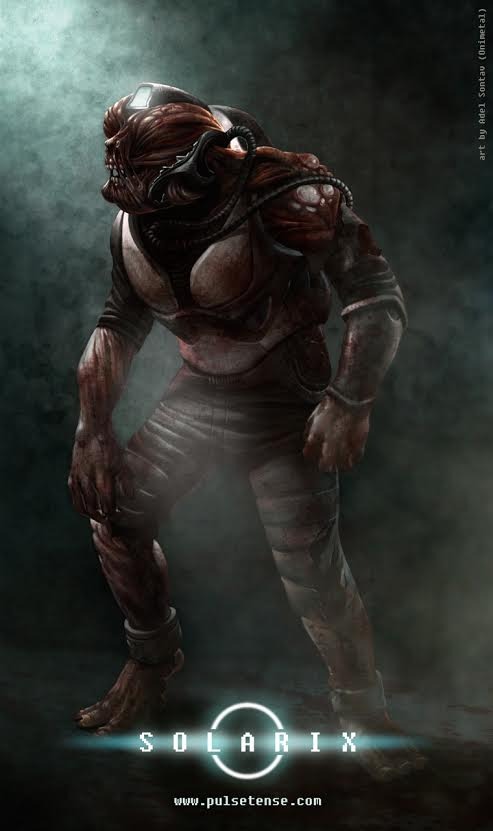 The Solarix Spacecraft, orbiting the planet of Ancyra, is the first off-world research colony in history. At a distance of twelve light-years from Earth, sending a message home takes up a not-insignificant portion of a human lifetime. Communication is possible, but, especially in the first few decades of the colony’s existence, it’s entirely one-sided and tragically slow. What this means is that the hundreds of staff aboard the ship find themselves necessarily isolated from the rest of civilization. Over time, and as they age, they begin to develop a strong sense of community and intermingling solidarity.

Two weeks before the events of the game, several crew members simultaneously fall sick with an airborne virus that has recently mutated to become resistant to antibiotics and treatment (a superbug). This virus is one of many that have accumulated in their bodies over the years on the ship, and its success sets off a chain reaction resulting in a massive combination of symptoms from different latent, dormant viruses. Over the course of two weeks, the ship reaches a 100% infection rate. The doctors find themselves unable to combat the collective diseases as their antibiotics are no longer effective and their quarantine efforts come too late.The infection is unstoppable and unpredictable. It travels through the air and the water and its victims. No individual person’s actions could have prevented the spread of the disease and no individual person’s actions can ultimately save the colony.

The accumulated infections are distinct for each victim, but they follow the same theme: the patient remains symptomless for the first few days, then a sudden loss in mental facilities (and a massive overdrive of the nervous system) sends the patient into variable states of consciousness. Eventually, the combination of viruses promotes a cancerous multiplication of cells that overtakes vulnerable sections of the body including the face, extremities, and groin. The patient mutates into a grotesque imitation of their former self, their mind having degraded into a primal, animalistic state in the span of a few days. They feel emotion, and they deeply feel pain, but they have no control over their actions.

Given the right set of latent viruses, some mutate even further. The growths spread over their face in entirety and often expand with such violent speed that the cancerous flesh bursts through their skin and clothes. Most don’t survive this stage (choking to death from constricted throats or collapsing from an aneurysm) but those that do suffer a great cost: they are blind and their nerves are deadened. They stumble around in innocent confusion while their minds endlessly simulate pain. Their other senses become heightened to a degree where every noise pounds against their skull and every taste seduces them to gluttony. They know nothing save hunger and distress.

There is no cure. There is only survival, and there is only containment. The infection cannot spread to Earth under any circumstances, and if that means shutting down the entire station and stopping anyone or anything that tries to escape, then so be it. There is no time for sentimentality or compassion. Kill everything that moves and try not to breathe the air.

Thanks John, we hope it plays out well, were currently deep in testing of our AI and current infected animations.