You probably know that into The End of The Sun we scanned buildings and exhibits from ethnographic museums. But how exactly copy and past real life building into video game? CHECK OUT! :)

You probably know that into The End of The Sun we scanned buildings and exhibits from ethnographic museums. But how exactly copy and past real life building into video game :) ?

If you are interested in that post we will present whole process, from visiting Ethnographic museum “Skansen Wsi Pogórzańskiej” in Szymbark to complete location in the game.

We are collecting funds on Kickstarter Now We have almost 60% of Goal.You could Support our Project Here and get the game in special price!

We Recommend you to watch Kickstarter video especially last part Where We are showing how we work on project and what places we visited during Production :)

Thank You For Support!

…Lets Back to our topic. You could see Here comparison beetwen Real photo and in the game view of the same building :) 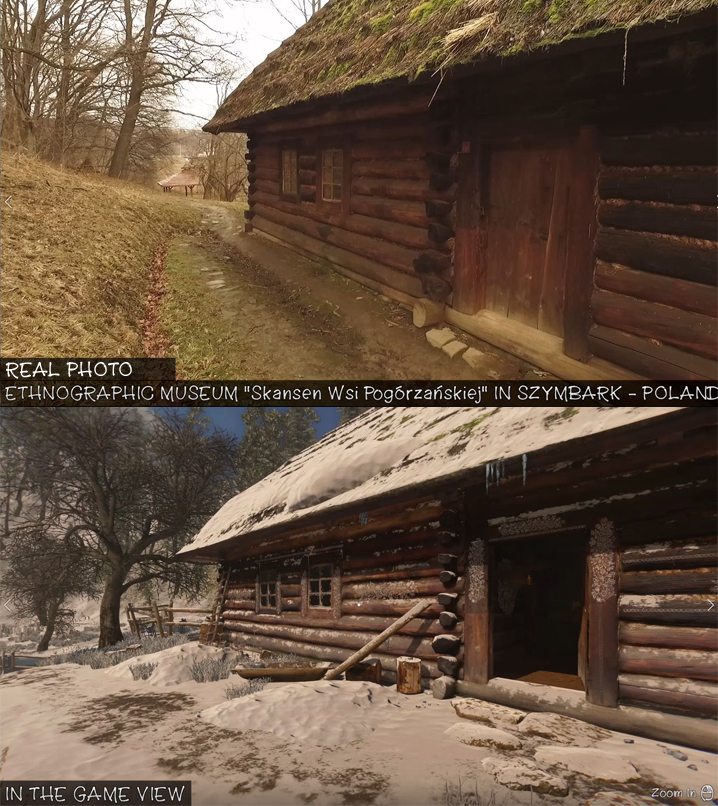 Here is how that building looks in Unity 3d Editor.

…So everything Started one Cloudy Day in Southern Poland in ethnographic museum called “Skansen wsi Pogórzanskiej” in Szymbark.

Why Cloudy Day You will ask? It’s not by accident:)

Cloudy day has perfect light (without hard shadow) to make photogrammetry scan. [Photogrammetry is method of making huge number of photos around real life objects so then computer could make 3d model from that, but we will describe whole that process for a moment . ]

So Poland has quite good climate for making Photogrammetry we have very often cloudy days here, the problem is that most days when there is cloudy weather, It starts to rain. What could break Whole job.

Yes On this day it was raining but only for a while…So We could start our job :) 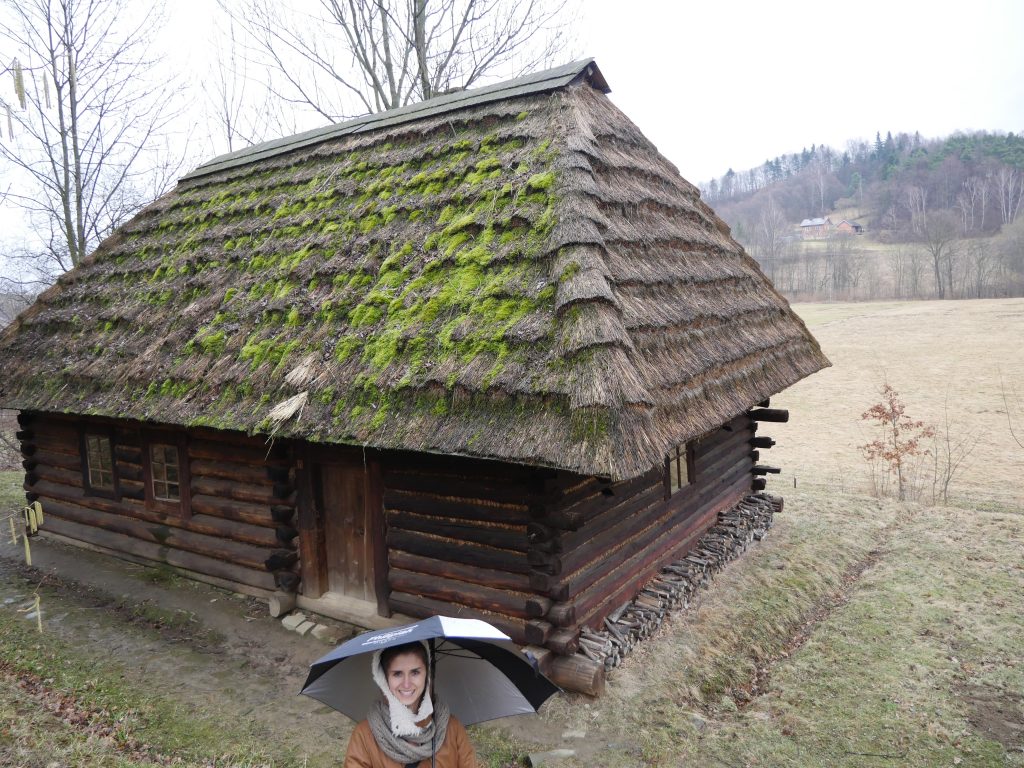 Making 1 building starting from taking photos to ready in game model could take even 2 weeks. We will explain step by step why.

Ok So Firstly We had to make photos of objects, But not just few photos, For that building there were over 500 photos taken. This is needed especially if objects contains a lot of protruding elements. 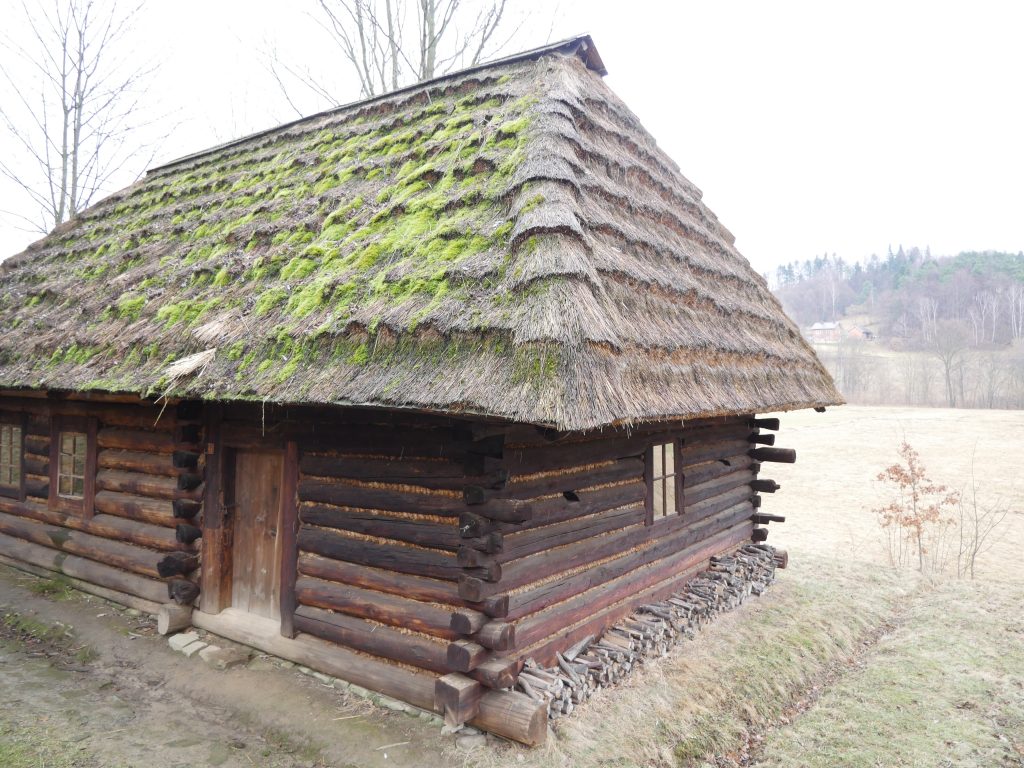 There is many rules that you have to keep when making Photogrammetry outside like:

There is much more of it. To Get more remarks You could read our earlier blog About our characters photogrammetry Here

Ok So After We made photos We put everything into Photogrammetry software as You could see below. Computer calculated photos positions and calculated Tie points. It Gives us overall look on object’s shape.

Ok but it looks not to perfect…so What next?

Now we need to calculate “Dense Point Cloud” It is shown on screen below and as You see it gives pretty good overall look how will be final effect.

As you see above We had to remove points that we don’t need in scan, as well as made some manual clean up…But it is still only point of clouds not 3d Model…

…So basing on that very dense Points Cloud computer will calculate 3d Mesh (Model). That Mesh is pretty heavy :) No it doesn’t weigh 3000 kg (ok we know its a poor joke :D ) but it has like over 8 milion of faces. (polygons that every 3d model is made from) 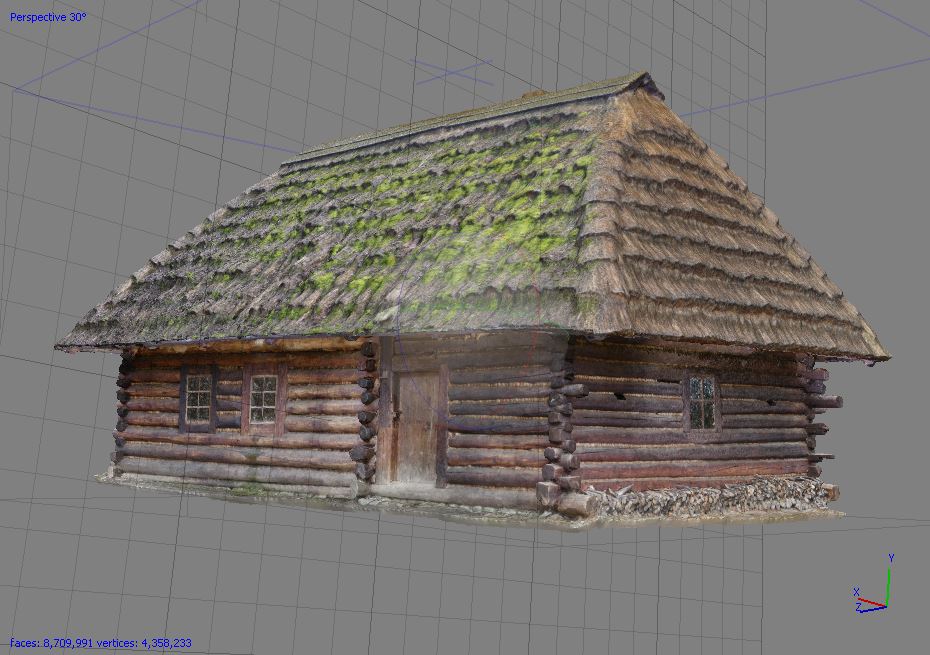 To Give you overall look how much it is – When you play newest 2020 game Your computer is drawing average about 4-5 millions of faces and it contains all 3d models on scene.

So Basically if that home has 8 Milion faces, We would be able to show You only that 1 building in our game. So What Could We do?

It could be done very often automatic way, but not this time. We had to do it manual way. In case of That buildings it was really hard job. Because many elements needed to be created from nothing. Why? Because we weren’t able to move many exhibits that were around the house, So model wasn’t fully perfect calculated. Look For Example Here: 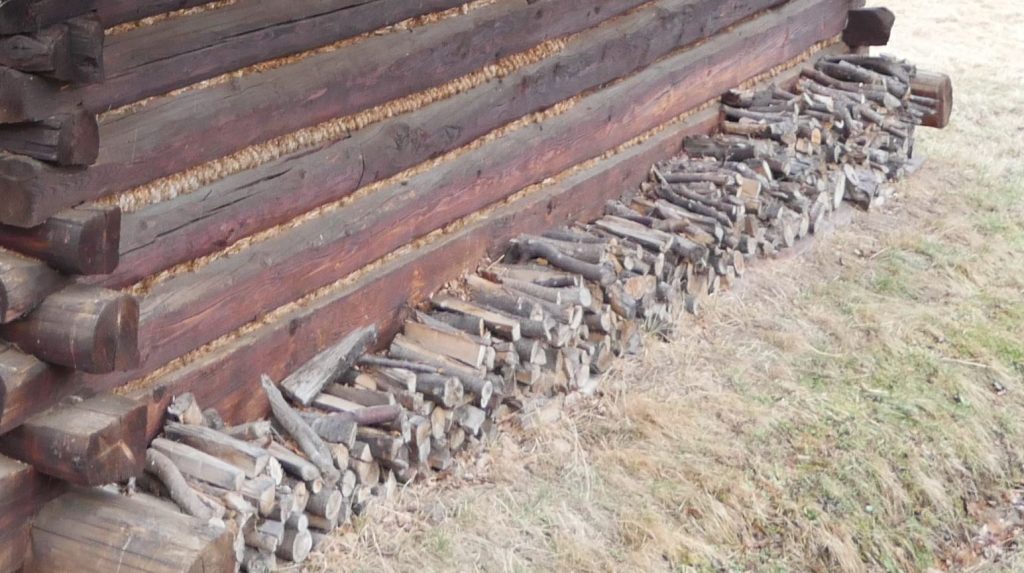 We just can’t Take All that wood logs away during making photos so photogrammetry don’t know what is under that. This kind of elements like wall under these wood logs need to be modeled manually.

Here Is what is Mesh of model after Retopology look:

Also As You can see we divided and organized some elements. Walls, roofs, doors, windows, are separate objects. We will explain Why for a moment.

As You could also See Photogrammetry Software Baked texture of 3d model basing on photos we took.

For optimization purposes We divided it for few textures: 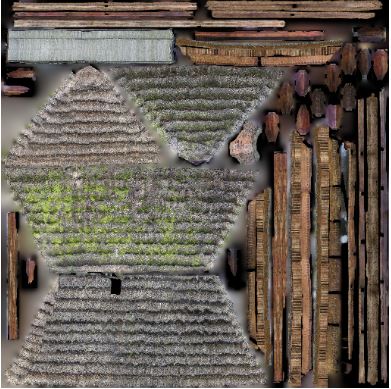 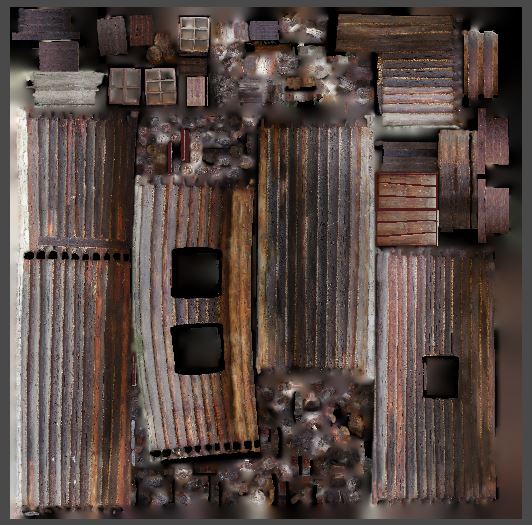 But Photogrammetry texture isn’t always perfect. Do you Remember That wood logs? These lying next to the building wall? Computer don’t know what is behind it So it will just bake wood logs photo as wall texture. So Next step was to fix manually all texture artifacts: 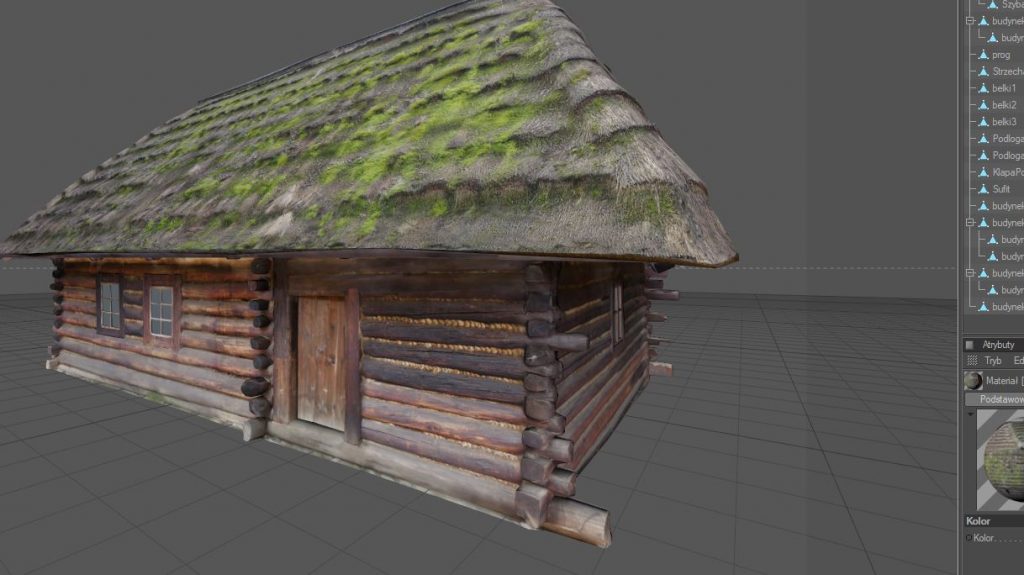 But it’s not the end of Our Work. Now it’s time to add details from our initial High Quality Model into low poly model? We will do it using normal map. This is some kind of special texture that allows to simulate light behavior in Game Engine giving illusion of details on surfaces

We mixed both details of colour(albedo) texture with 3d High Poly model details. We Described it here earlier.

Here is how it looks in Game Engine without and After turning on Normal Map on walls:

Ok So Let’s talk why we divided building into The parts Like Roof, Walls, doors etc. There were few reasons.

With this Kind of organization We could manipulate different Elements of buildings. For example open The Door, Remove Windows or some interior walls.

You could see that below:

Also all walls in interiors were manually modeled. Why?

In the ethnographic museums interiors there is always a huge number of objects. This is main reason that without spending weeks on taking these objects out and then putting it back in it is impossible to make photogrammetry. It’s much easier with almost the same effect to made it manually with mirroring outerior walls inside.

Here below is how finally interior looks. Pretty good. Because inside of building, walls aren’t most important elements. Most important are items that you will find there so small exhibits that we scanned too. But will there about it in different blog post :)

…Dynamic Weather and snow that we have in our game.

Basically We are using Lux Shader that allows You to generate in Dynamic way snow on objects. This is Why we needed separate “No Snow” material on interior walls/ floors and “with Dynamic Snow” on these ones Outside.

Here is how Home Looks In Unity 3d Editor:

So here Is how It finally looks In the Game: 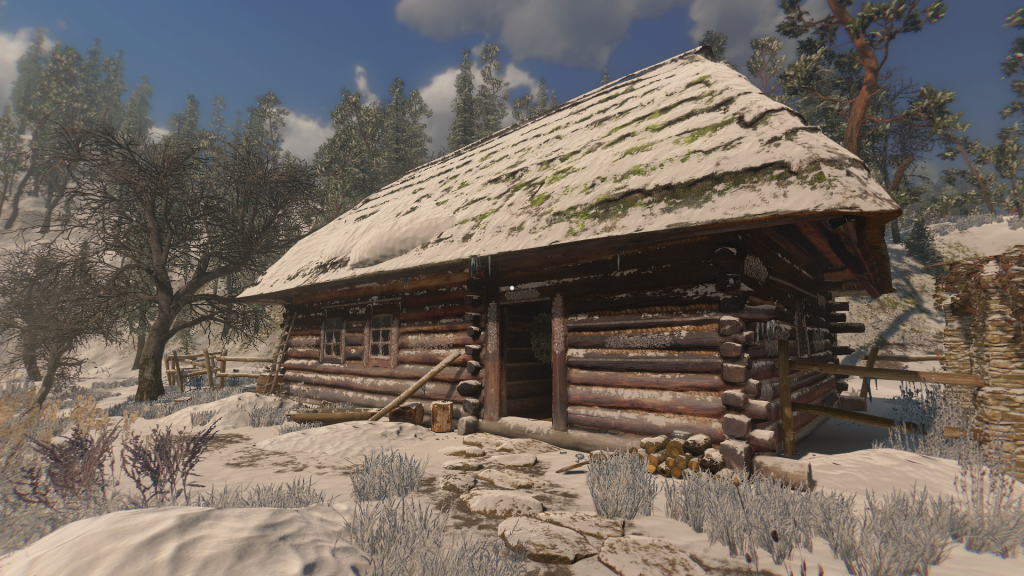 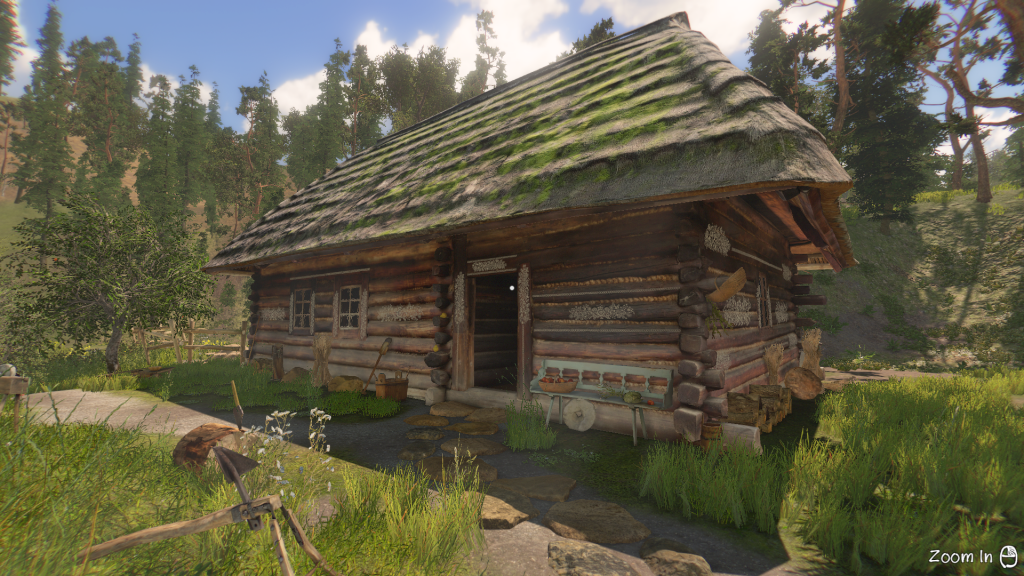 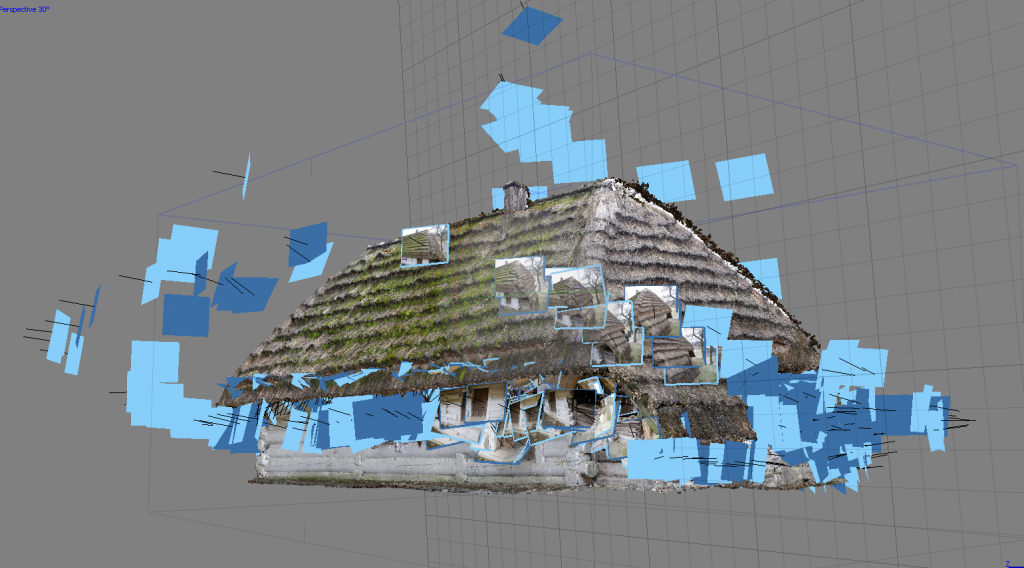 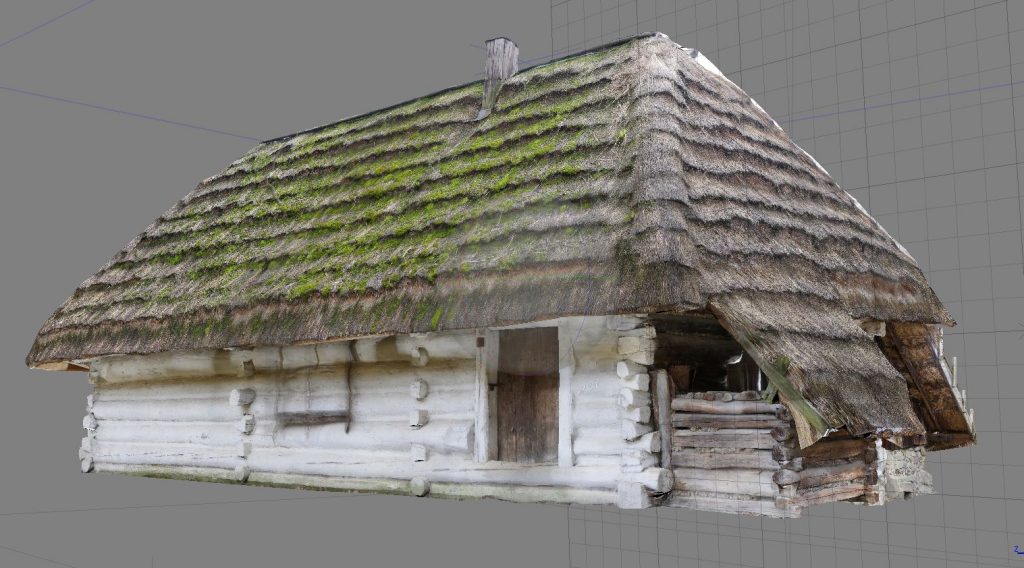 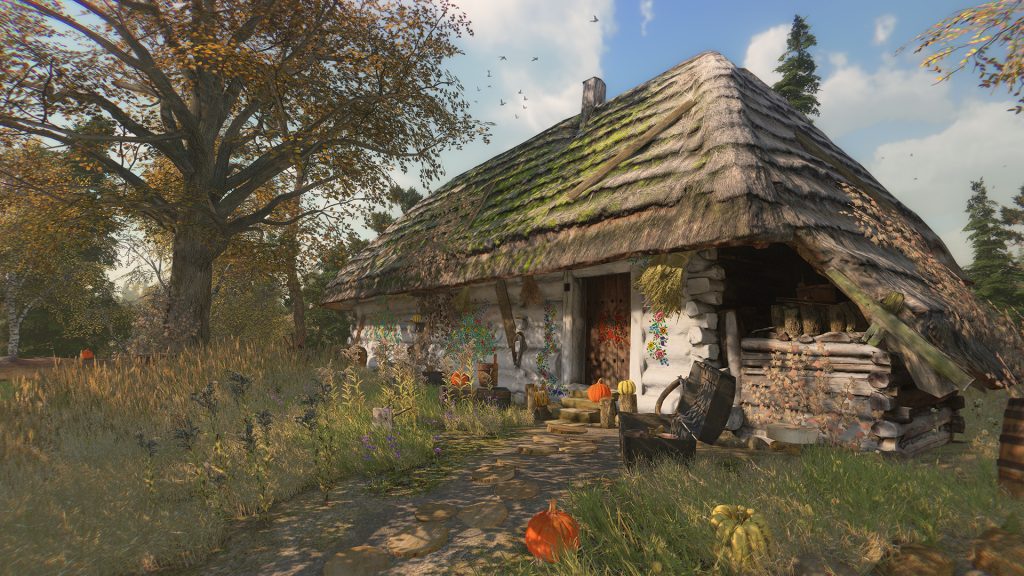 Our project is now Available on Kickstarter. We are collecting funds to be able to finish production of the game.

We have already over 57% Of our Goal! So It is highly possible that we will reach our goal Soon! You Could help us with that! So We will be able to focus 100% on creating the game :)

It Would Be Awesome if you Could Support us!

Let us know what do you think about this article :)

Wow what a nicely detailed article!

Thanks a lot! Great that you like it :) Check out also our Kickstarter campaign Kickstarter.com

Wow, great article and excellent art. Thanks for sharing!

Thank you very much! Check out also our Kickstarter campaign Kickstarter.com