Preview of what new content comes in the next update.

In this development blog i will discuss some of the upcoming content that will come in the next update. This has been a busy week for me implementing the rocket launcher weapon set.

Each of these launcher fire a barrage of self guided mid range rockets toward their target. Each kind of rocket has a different damage profile and various strategies to increases their chance to avoid interception.

The Javelin rockets have moderate hull damage and almost none existent shield damage profile. With tech upgrade its damage can be enhanced by armor penetration as well as its evasion strategy by a major speed boost that triggers toward its target half way through.

The Trident rockets have an average damage profile against both hull and shield. Its enhanced shield damage and signature evasive flight pattern can be unlocked through research upgrades. 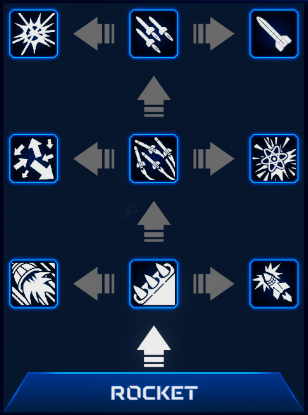 The Harpoon rocket has a high hull and average shield damage profile and it is flying at a high speed to evade interception. Its upgrades include an overall damage boost and armor plating to increase its survivability.

I am happy to announce that earnings from Early Access support allowed me to invest into new assets that comes in the form of a new menace the sectoids. These are the most alien vessels in the game so far with with their organic hull design look like the stuff of nightmares if you don't like cockroaches.

Well, as the label indicates they are unidentified, due to a lot of things are still up in the air about them. So expect an upcoming dev log on their weapons ships and the kind of threats they may pose.

There are 3 major menace factions planned for the game each on its own can cause hindrance for the player. Although it is designed in this way, to allow the player to customize their game to they liking, options for each menace factions' spawn frequency is coming with the next update.

With the addition of new weaponry pirate ships loadout been change to favour rocket launchers. On the note of changes to the pirates a new spawn event is coming soon, in the form of raiders, usually aiming to plunder undefended worlds and going after mining flotillas.

Many thanks to all that already bought into Early Access, you support and feedback much appreciated!