A spotlight on how different difficulty levels are implemented in Leviathan Crossfire. About reinventing the wheel... 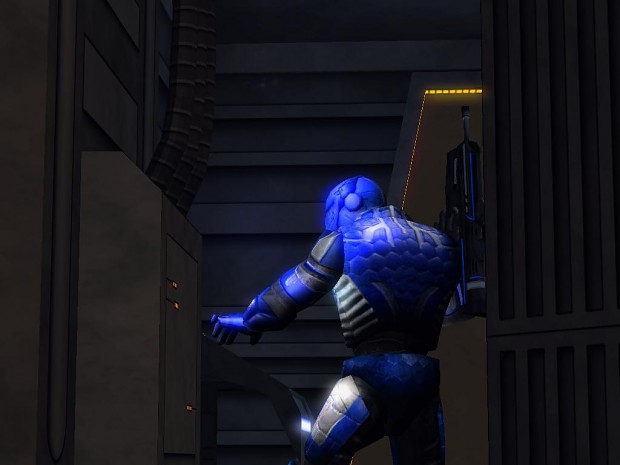 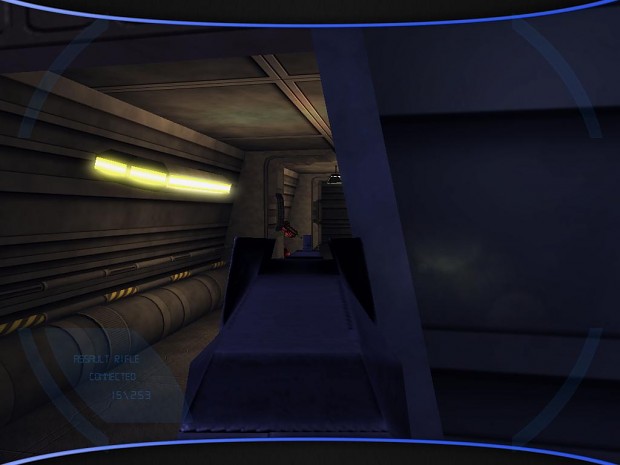 Okay, here comes some text... ready for it?

Last week I announced that we are developing a new playable demo. One of the new features I told you about was adjustable difficulty. Sounds like simple thing, right? You click a button before the game starts, and that's it, right?


It is that simple from the perspective of the player. Many players of the Revelation demo mentioned that it is way too hard to beat. Therefore, it is obviously necessary to adjust the difficulty for the nxt demo. But how far? Will it be too easy, yet too hard? The solution is simple: You decide how to play.

But the freedom of choice needs some planning before it can implemented: How does the choice the player makes affect the game? Which parts of the game need to change dynamically depending on the chosen difficulty? You can decide whether to play on Easy, Normal, Hard or Insane.

We had ideas of different accessable rooms or collectable items depending on the difficulty. But that went too far, sometimes the easiest solution is the best: In the end we decided that only the enemy bot skill will be affected by the mode you choose. The game experience as such should be the same, no matter how experienced you are with the FPS genre in our oppinion!

So here is the planning chart as a proof that difficulty levels are not just some nice button you press with no effect, but a thought-out feature of the game: 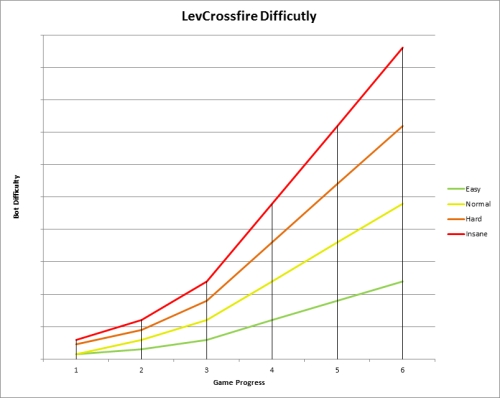 Read it like this: From left to right, the game progresses and gets harder. From bottom to top, the bot skill increases (higher probability of headshots, higher damage by higher precision). The four lines represent the difficulties of the game as the legend shows.

You can see unexperienced players will get a smooth gameplay with the easy difficulty compared to the insane players who will get... insane if they are not already!

Can't decide??! Here is another addition for you: There will be a fifth option called "Auto Adjust". If you choose this mode, the game will permantly track your performance (health level compared to kills in a row) and dynamically adjust the enemy bots during gameplay. This way you can have a cinematic experience that feels challenging but allows you to proceed through the story without trying certain situations over and over again. If you choose it to be that way - it's up to you!

And, just to mention it: It's alredy implemented and works - as far as tested - very well already.
Don't get me wrong, It do not mean to say we reinvented the wheel... concepts like these are pretty common for FPS games. I just wanted to put a spotlight on it for once. For those that are just as interested in the concept behind the games as I am!

Hope you enjoyed this little article (or the screenshots above, that would be fine as well!)

thanks for this great aritcle MetalZeroOne!
as a long term sp-mapper/modder i too am very interesting in concepts behind a (fps)game. Maybe you do remember me, we did change some pm's about your first demo, as soon as the new demo is avaleble i will test it again thoughrowly. Over the years it has become clear to me that a lot of gamers don't really think about difficulty levels of a game or mod.
I love the fight Auto Adjust setting, although i never will use it. Personaly i play most of the times on Hard, insane will probebly be a bit to insane for me, lol.
It is great that you looked in to those other options, like you mentioned,(of different accessable rooms or collectable items depending on the difficulty). It is a shame you will not use these, but i understand that that would mean a lot of extra hard work.

Still, i would like to give you another option to think about. Personaly i am a great fan of having more enemies (bots) when you get in to a higher difficulty setting. So they enemies get more deadly, but there are also more around when you play it in a higher difiiculty level. This will give a game or mod a higher replayebility value. I am using this in my latest sp-mod that i am creating.

All in all, i love what you are doing. I am not a big fan of the FPSC engine, but you have shown with your first demo that this game doesn't feel like a FPSC game, what ia a great thing when you ask me!

success and i am looking forward to your next demo!
Leon

Hi Leon, I sure remember transferring very detailed feedback points from your PM to my to-do-list :)

The decision to deny that different rooms are accessable depending on the chosen difficulty level was not based on the hard work (wouldn't be such a big deal here) but we wanted the game to remain the same for all players, not matter how experienced they are with the FPS genre.

More enemies is a good option indeed. We will use it, but very smoothly only in order to keep the framerate up for the insane guys ;)

Thanks for your support, man!

glad to be of some assistance, keep up the great work!