This patch is the first of several major planned content updates. We're introducing 6 new turrets, each with many upgrades options.

Endless Invasion: Enemy forces will continuously spawn to attack, gradually spawning faster, stronger, and better ships. This mode will keep score and allow you to more easily try out strategies in a faster pacing than the scenario modes.

- Arc Reactor: Energized particles run through the conduit producing high voltage electrical arcs that can attract and arc to nearby targets. Deals randomized damage, arcs to 2 additional nearby available targets.

- Gauss: Rapid-fire rounds, fires at nearest target. Has a 50% chance for projectile to ricochet to a nearby target.

- Rail: Energy is concentrated to propel a specialized heavy projectile to enormous speeds. Deals heavy damage with a 25% chance to ignore armor and shields each shot. Requires a significant cooldown period between each shot.

- Comm: Satellite-ground communication has been established, relays power and provides a bonus to satellites depending on type. Extends shield satellites max duration by 10 seconds. 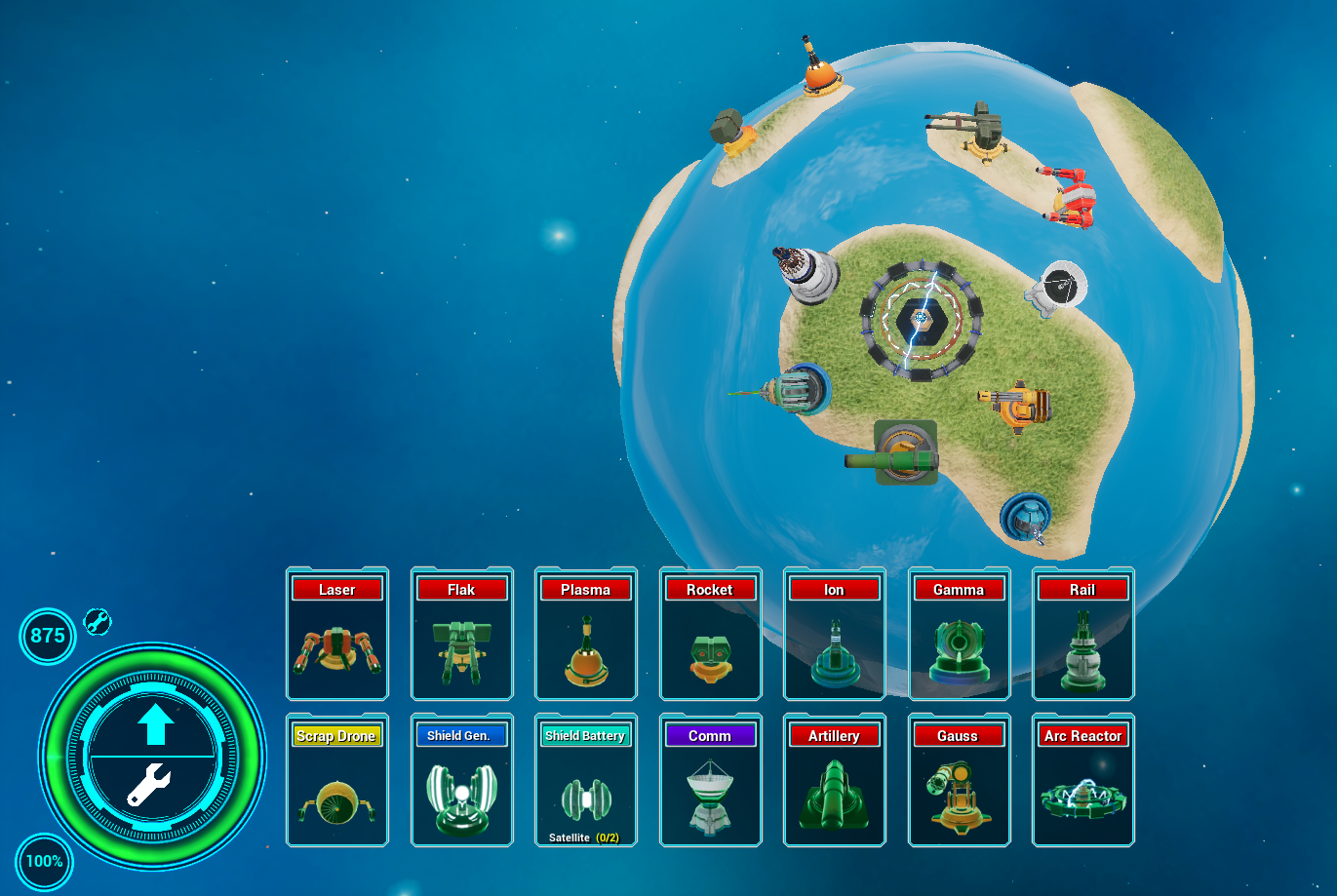 -Arc Reactor-
Arc Reactor II: Arcs to up to 3 additional nearby targets.

Arc Reactor III: Arcs to up to 4 additional nearby targets.

Arc Cannon Tether: Two energized fields are each launched at a random nearby target. When both fields reach their targets they form a connection dealing increasing damage over distance.

Arc Cannon Chain Reactor: Arc fields now briefly chain to all available nearby targets in a small radius from the impact location.

-Artillery-
Penetrating Shells: Increases damage and fire rate, has a 10% chance to deal 2x impact damage to the target. Each additional shot against the same target adds +5% chance.

Penetrating Shells II: Increases damage and fire rate, has a 10% chance to deal 3x impact damage to the target. Each additional shot against the same target adds +10% chance.

Explosive Feedback: Enemies caught in and destroyed by the initial explosion also explode themselves.

-Gauss-
Gauss II: Concentrating fire allows each consecutive shot to deal slightly more damage each hit on the same target. 50% chance on hit to ricochet to a nearby target. Fires at nearest target.

Recoil Rounds: Specialized projectiles that ricochet more frequently. 75% chance on hit to ricochet to up to 2 nearby targets. Fires at nearest target.

Many minor bugs and fixes have been addressed this patch.

Whats Next?
Many planned turret upgrades did not make it into this patch, these additional upgrades are coming soon to be delivered by minor patch on a much quicker release cycle.

The next major patch will add many more upgrades and will feature the addition of expanded satellites into the game.

We look forward to showing you much more of what's to come!