Adelaide’s video game and anime festival (AVCON) just finished last week and it was an amazing experience. I showed EXO ONE in the Indie Games Room along with 60 other developers over the course of the weekend and had a lot of fun.

Adelaide’s video game and anime festival (AVCON) just finished last week and it was an amazing experience. I showed EXO ONE in the Indie Games Room along with 60 other developers over the course of the weekend and had a lot of fun. I thought people would like EXO ONE based on family/friends/colleagues playing, but the response was above and beyond what I could have hoped for! Considering how fleshed out the two planets were in the AVCON build, people played for a really long time and in quite a few cases, would come back or bring friends over to play. Players would quite happily travel in one direction for (I swear up to or over half an hour?) on one planet, I assume mostly because they enjoyed the flowing, physics-based movement so much. I was blown away! 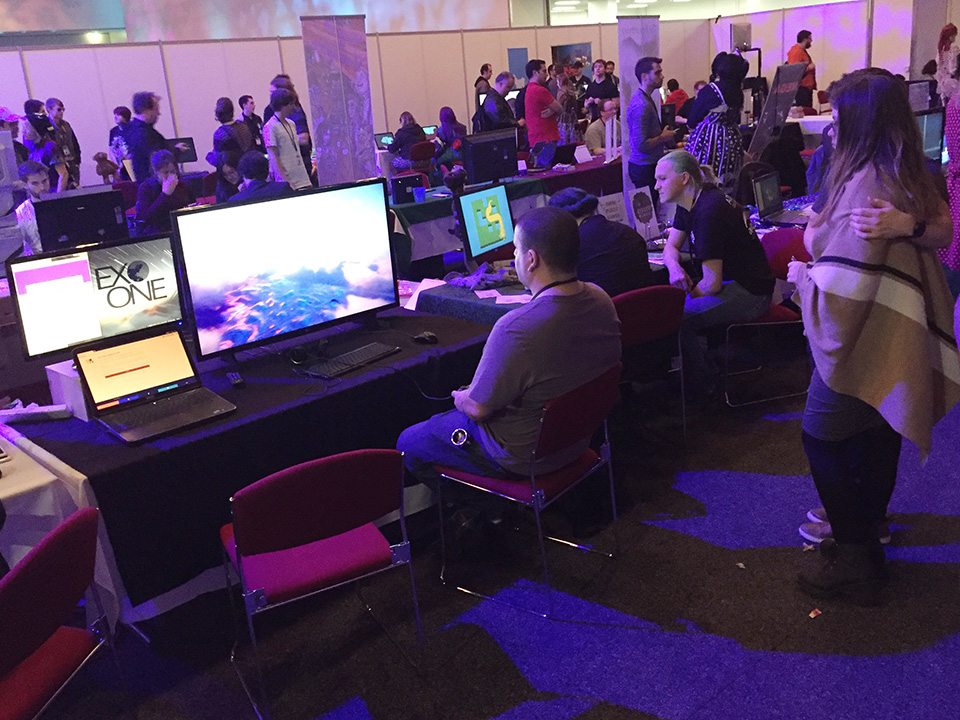 Some of the most common comments:
– “It’s really relaxing/hypnotic” from both players and people watching
– “I can fly!!!” after reaching and soaring above the clouds
– “Weeeee!” in the ‘tutorial level’, which is a spherical interior level, where people loved building up huge speed sticking to the outer wall
– “I love the graphics” and “Is this the Unreal engine?” (It’s Unity 5)
– “The sound and music is amazing”
– “How long until it’s out?”

Here are some answers to “what was your favorite part of the game?”
– It was a very beautiful game. i loved the movements of the avatar and how it looks so much like real life.
– the graphics and physics of the game
– exploring
– world design / the visuals / the graphics
– everything
– Beautiful visuals and unique design
– Beautiful visuals, free reign, satisfying physics
– the atmosphere of the game – beautiful and stunning. I like the freedom you feel with movement, zipping down hills with more gravity then hurling off a ramp.
– Exploration.
– Relaxing – Great Graphics

And some answers to “what was your least favorite part?”
– no impact crator / trail
– Changing direction at low speed with varying viewing angles. Intuitively I’d feel better steering relative to the ball’s movement rather than where the view’s pointing.
– I didnt find many flaws but i think the story should be more open.
– trying to find objective
– unclear of the main objective
– nothing
– some of the sound affects were a bit screechy
– im not even sure
– Lack of direction, though that was probably intentional
– I might not have played it enough to see, but it would be interesting to explore a wide variety of landscapes – more variation would be cool
– Sometimes feeling like I’m not in control, e.g. not being able to stay in one place.
– No objective – Its a good thing though

Other comments:
– It looks and feels phenomenal and super mysterious. I love the massive structures.
– Love the idea
– really like it, music is awesome, really interested of how the final result will be
– multiplayer!
– Loved it – very relaxing etc. Can’t wait to see more – love the exotic landscapes. Would like to see more and explore various areas!
– very echoey voice is hard to understand. I’d love a level with more green and that would look like a nice place to be. Gliding [needs tweaking]
– Very serene. I like the first sound track and the introduction was a good tutorial. Got stuck on left stick in to zoom. Doesn’t feel required.

My biggest takeaways and areas to focus on after looking through the survey answers, and from talking to people all weekend was:
– It wasn’t obvious enough where you had to go. While it’s an open world game, you have to travel to a ‘transport monolith’ in order to launch to the next planet. So that needs to be clearer and more visible at all times. People would either think the launch point to the second planet was ‘just another piece of scenery’, or they would lose where it was among the clouds and rain. Another solid option here is that there are multiple launch points on each planet, so no matter which direction you go, you’ll be able to find one. Perhaps the best way forward is both making it clearer you need to reach these structures, and also having them scattered, so you’ll never feel like you need to remain near the sole transport structure to get to the next planet.
– People also didn’t seem all that interested in the story, however being at AVCON, it was incredibly loud and almost impossible to hear the voices that communicated the story. I’d equate it to trying to play Dear Esther or Gone Home in an arcade (a bit useless).
– 10-20% of players didn’t get a handle on the gravity based movement, or it took them a while to get up to speed. I’m going to include a more in-depth tutorial here which, in real-time, will instruct players on how and when to use it. Still, those players who had trouble would play for extended periods of time just rolling and gliding quite happily, which is good. I suppose there’s also a chance that some players just liked moving more slowly.

Thanks to everyone that played and signed up for the newsletter, you’ll be the first to know when the first publicly playable build is available via itch.io.

And apologies to the other developers who took the time to come check out EXO ONE, I just didn’t have time as a solo dev to come and return the favor to everyone. Was great meeting so many cool people for a change, though. I am quite the recluse developer!

P.S. if you’re ever in the market for a solid TV, LG make one which can survive a fall from a table top onto the floor, completely unscathed!

We are currently sitting at rank #25 and on a trajectory (based on the sweet graphs Steam gives you) to enter the top 20, which would be amazing! From what I read recently on Steam Greenlight, I expected votes would trail off quickly after 48 hours, which hasn’t happened.