This is story so far on the development of the game to explain in detail the game play, designs and animations in a collective post.

Hi Everyone! We're the Cake Collective and this is our game An Aztec Tale! The project has been in the making for a few months, since July at least, but progress was slow. We rebooted what the game was about and how it looked and development has really been kicked up a notch! We want to see people playing our game as soon as possible! 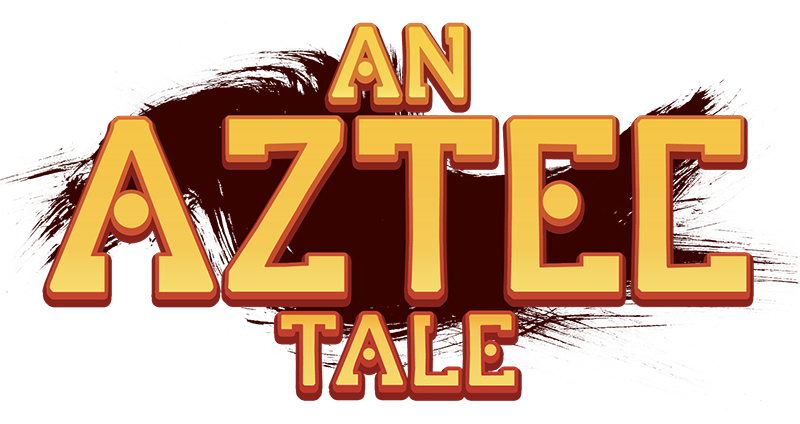 'An Aztec Tale' is a 3rd person city builder with individual unit management. The Emperor has been kidnapped by the deity Quetzalcoatl; it's your goal, as the noble brother or sister to the Emperor, to bring him back!

In this world civilisation took to the sky, living on floating islands. You'll start the game on one of these islands and have to work to build up a diverse army; taking care of multiple tasks such as sending soldiers out on raids, keeping the morale of your civilians high, making sure everyone has enough to eat and of course rescuing the emperor! 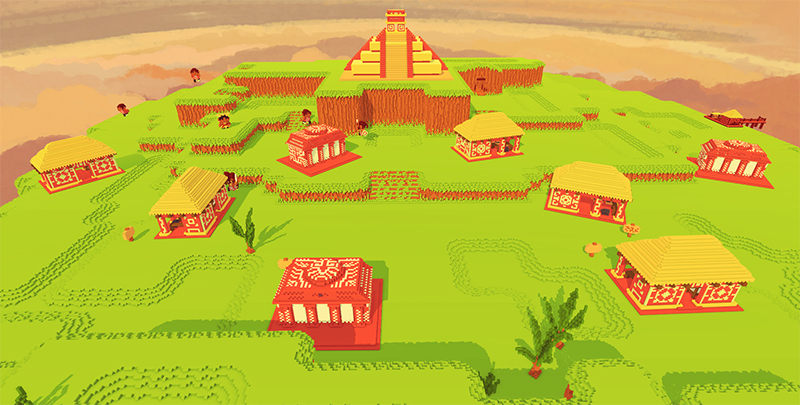 As you progress through the game the amount of land you have at your disposal will increase, allowing you to build larger towns with unique layouts that compliment your play style. 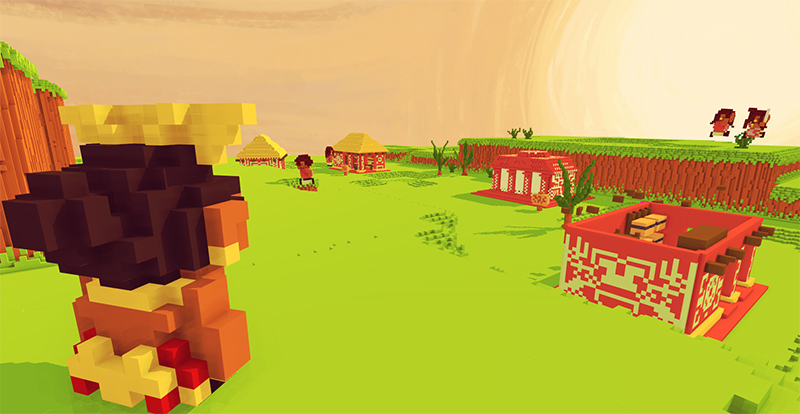 The game was originally titled 'Kingdom of Pixels' and had a generic medieval fantasy theme. Evidence of this can be found below in posts.

Hello, we are the Cake Collective we consist of 3-4 people working on this game at the moment.

An Aztec tale will be a 3D third person city sim, where you will start off on a desolated medieval sky island and will have to build a kingdom from the very beginning. In this game you will: build an army to raid dungeons, employ groups of miners to help the kingdom grow and people with time off to roam the kingdom to create a sense of atmosphere.

In the future of this we want to involve the player with as much activity that the A.I do (from dungeon raiding to mining) and even more with Diplomacy actions such as declaring war or just trading and upgrading units, but for now these are future ideas that may be put on the roadmap (if it is fun and not tedious).

We wanted to create a game where you build a city and be in a third person view for a full immersive image where things were happening as you walked around with a more simplistic management system compared to SimCity 4 or Cities: Skylines and immediately we thought of My Life as a King a WiiWare game that came out for the Wii, also another distant comparison would be Rise And Fall: Civilizations at War a PC Game from 2006.

For what we wanted to achieve from this game and the fact that the Lead Creative has plenty of experience in this game engine already, we decided to use Unity. After we got a decent prototype released and an appropriate stress test I can then go back and optimise to get a perspective of the load Unity can handle and how well it can garbage collect.

From the devlogs we hope to give you more information on the art style and the techniques I have done with A.I and other things to build this game.

Features in the Game!

The brief so far is that the Emperor has been kidnapped by the deity Quetzalcoatl; it's your goal, as the noble brother or sister to the Emperor, to bring him back! In this world civilisation took to the sky, living on floating islands.

Build the way you want

We’ve reworked the building system so that you can place them down anywhere within a reasonable zone rather than the old ‘Plot for sale area’ thing going on, in our small unreleased build, you can only build down one at a time, but you can always queue the next building to be built while the animations are going! Here is the thing we got going! 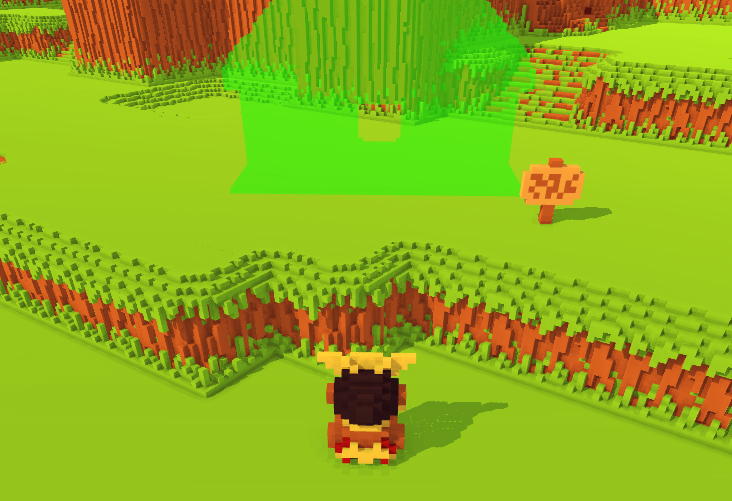 After the house is built, you may find that nothing has happened, this is because your citizens have to migrate to the island their house is on, the first migrate boat is free of charge, but if you don’t want a massive stack of awaiting migrants then you will be able to expand your docks! 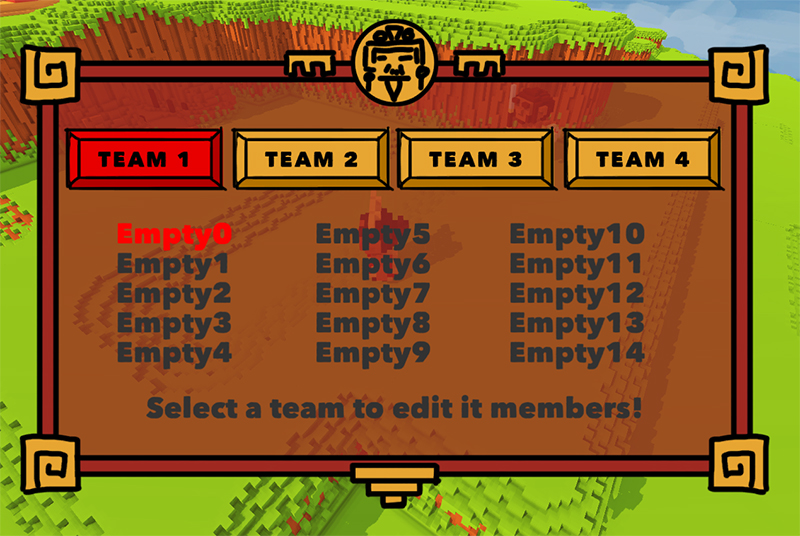 Your Adventurers can now be formed into teams to raid/hunt in dungeons, you can customise your team which will have their own ‘raiding’ ship to complete their mission. Whether the ship comes back empty or full of gold/crys and even island components (which we’ll talk about later) is based on your judgement on your team.
We’ll build a city dedicated militia team as well which will be tasked to look after your base.

As you build your base up, you’re bound to attract attention from other islands full of monsters and these monsters want a piece of the pie. If you’re not prepared then they will go and attack your temple to steal your hard working resources from you. This will cause a panic from miner and wanderer NPC’s to run back home. It’s up to your adventurers (if you have prepared properly) to teach these monsters who’s boss.

Expand to get more islands

As you build more and do more hunting missions/quests you can get more and more islands around the main base which will allow you to build more on a set of unique islands.

When building your base up there will always be a need for demand for resources, we have implemented:

Gold : a semi-consistent resource from miners mining gold from a mine, however a mine can be depleted

Crys: An inconsistent/unique resource which is rewarded from sending a hunting party out and attacking other islands, the amount will depend on the risk/reward on that hunt.

Food: A consistent resource that should always be considered before expanding too quickly as a lack of food will effect happiness of your tribesmen, a very important factor to the outcome of your base.

Happiness: The most important factor to consider and almost too unfair in current builds. this effects everything a tribesman with any role/job. They will mine slower/faster, attack slow/fast, goto places slower or faster and can bring your economy to maximum output or bring it to a standstill. This will be a value you will have to consider as many things will effect it (not just food).

We've had some of the NPCs, the one's planned for the prototype anyway, so lets showcase some the buildings tied to them!

Temple
The temple is yours! It's the biggest building in the game currently and serves multiple purposes. The temple is where you can revive fallen adventures and it's also the target of invasions, you've got to protect it or risk losing all your gold. You don't get to choose where the temple goes, it's a set place on the map for everyone. 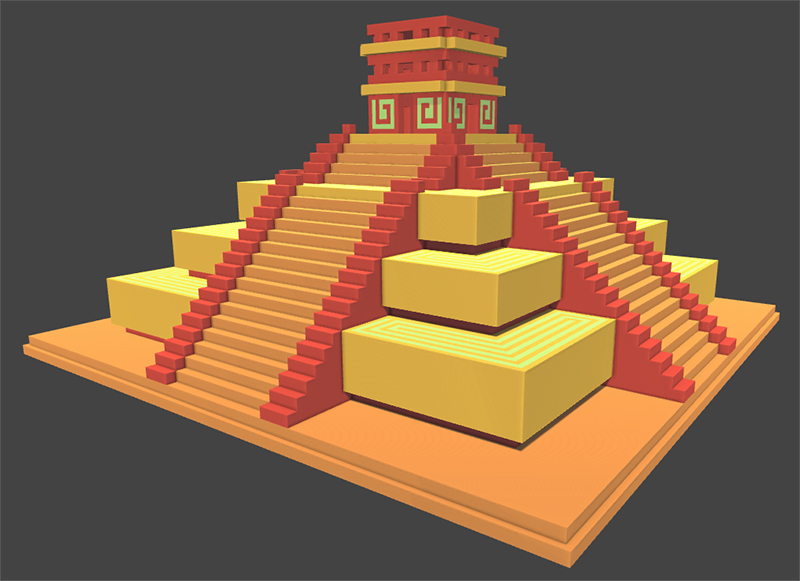 Mining House
The home of... miners? Yeah that sounds about right. You'll want to place these closer to open mines to cut down on your Miners travel time. 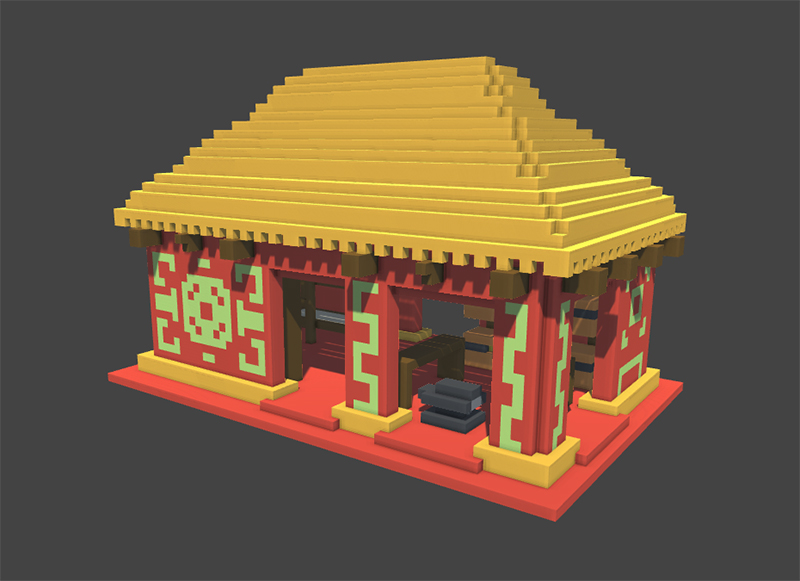 Barracks
Spearmen move into this barracks, placing these closer to your docks mean that Spearmen can get to and from the quest boats quicker. You probably don't want them to far from the temple either, otherwise they might not be able to stop and invasion force in time! 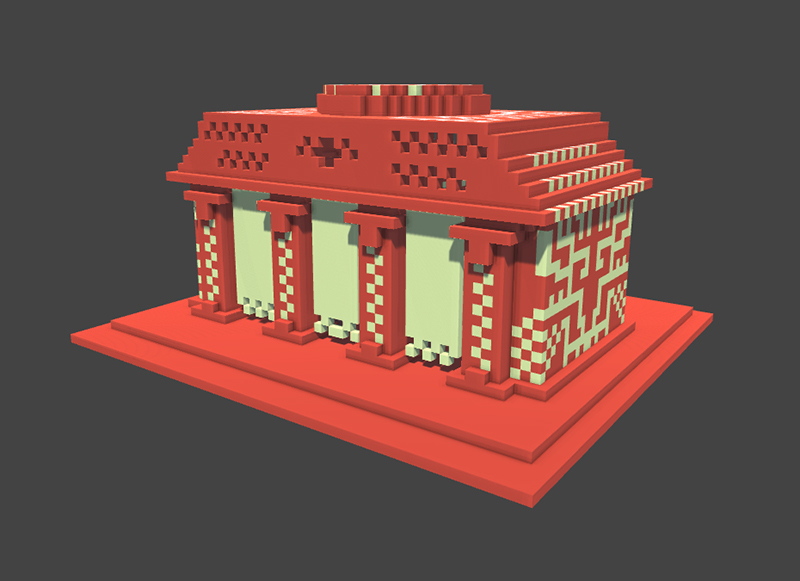 Deity Idol
When placed the Deity Idol emits a buff in an area of effect around it, the buff is dependant on the what stone carving you place into the idol. This means it's possible too place multiple idols with different effects all over the map, allowing for strategic placement; e.g. you might want to place 2x movement speed near your miners while you have a faster exp gain near the Soldiers. 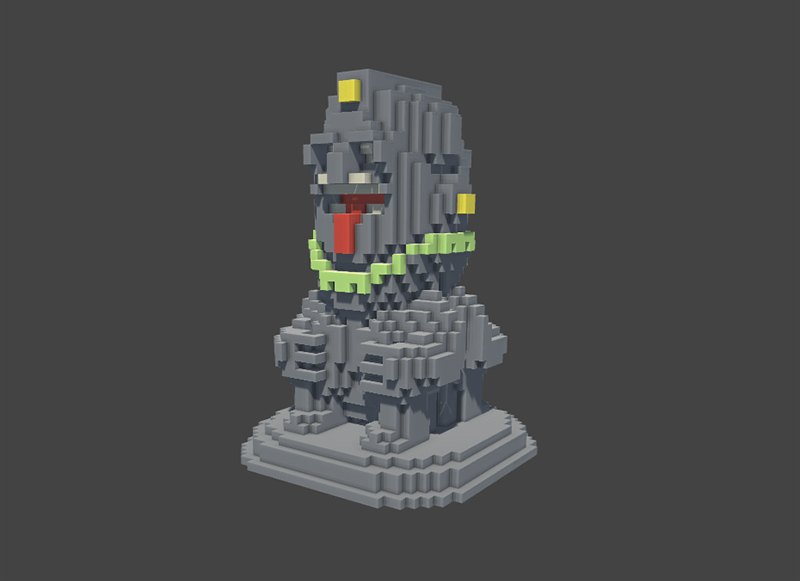 Animation
When you decide where you'd like to build a structure it'll start a building animation, currently each building takes roughly thirty seconds to build. This gives the relevant class type time to jump on the trade boat and move into their new homes. Below are the current building animations but are likely to change to lighten the load they currently have on the game.

The animation is two fold in "An Aztec Tale"; it's a combination of traditionally principled animation, the run above is essentially a rigid bouncy ball, and frame by frame sprite animation.

We're gunning for this retro inspired aesthetic but being in 3D introduces all kinds of problems; just changing sprites frames felt really awful, running looked and felt bad and didn't take advantage of being in 3D.
Squash and stretching a single model around felt better but looked cheap, like I wasn't really trying. So the decision was made, it had to be a combination of both.

Enemies
I'll be going more in depth into each class in another post.
I feel this Aztec theme is stronger and more unique then whatever I was pumping out before. Definitely gives us a whole lot of monsters to play with! Here's a peek at a few. 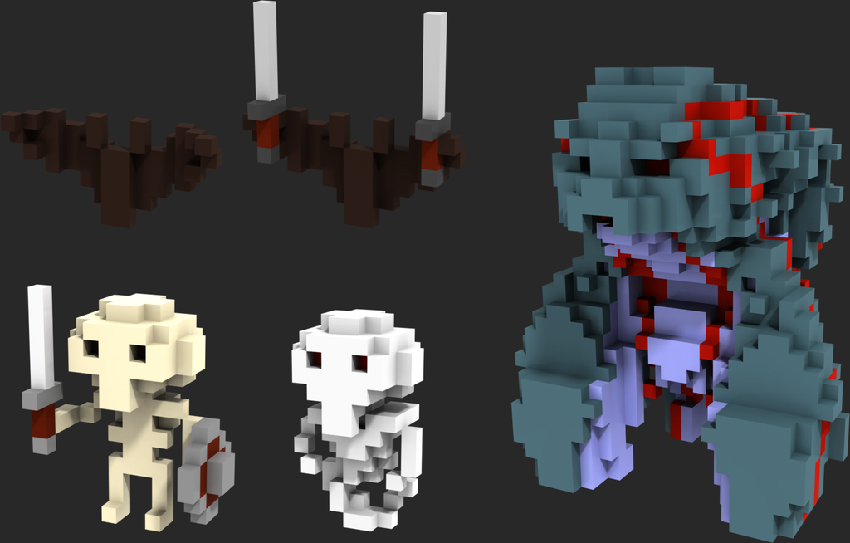 We've got more than just models to talk about, we've made large game play changes that affect buildings, NPCs, raids, invasions and story.

This was the old model, he's fat and looks like a weird slug salamander. The colours were too bright and cheerful so Leo decided to give it a remodel. 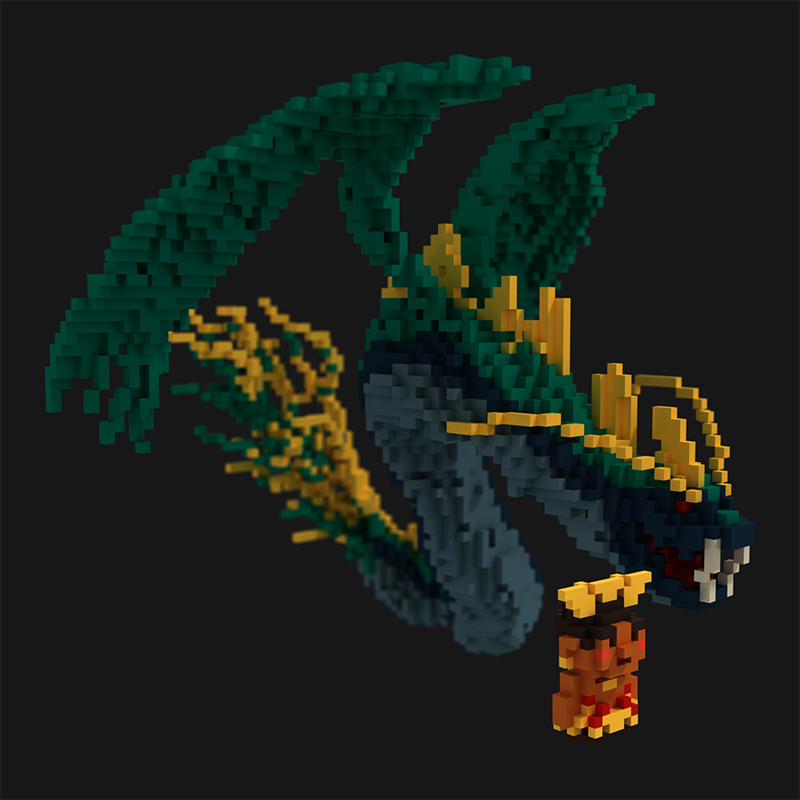 The new model has darker colours as well a new slimmer physique! Going to be a nightmare to animate, especially due to his size, but as he's going to be pretty central to the game it's a necessary pain.