In this post, you'll find some of the early mutations that you'll have to face during the first levels of Sewer Tea.

Those who follow me on twitter probably know that I've been struggling whole week with the light system. Using Unity3D lights with Orthello framework is not giving nice results so far. 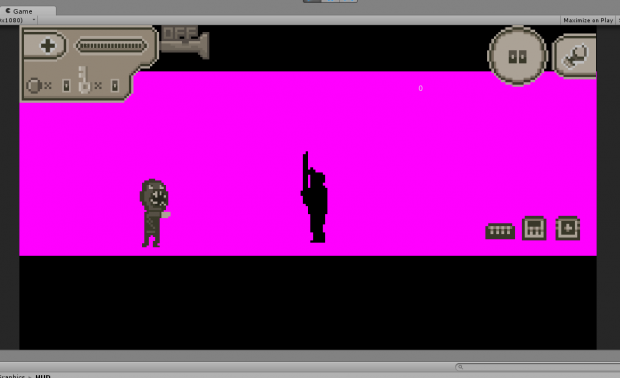 This is what I mean by "not giving nice results"

I've decided to stop focusing on the lights for the moment and keep working with the enemy AIs, which needed some behavioural cleanup.

I've prepared a little video for you with three of the main monsters. You can see the video below:

They actually don't glow or anything like that. Their name comes from polish "głowa" which means "head", and they have such name because their heads are bigger than usual because of the mutation. Glowers are mainly citizens of the State which were infected during the first sewer tea clouds in the city the action takes place.

They don't have any particular attack. They just stay idle until the player enters their awareness range, moment in which they just chase the player and damages him on contact. They have a random assignment of HP ranging from 30 to 50 HP. They deal 15-30 DMG.

Screamers are flying jellyfishes that fly around from right to left and viceversa. They explode on collision with the player, dealing a considerable amount of damage. It's not clear where they come from, as there's no sea in the roundabouts of the infested city. The only way you can survive their attacks is by shooting them before they reach you.

These are basically slimes. Not a very powerful enemy, as you may have guessed. They deal 10-15 DMG and have 5-10 HP. You shouldn't understimate them though, since they can outnumber you pretty easily and if such situation were given, your health could be severely affected.

My favourite one. Gaschines (gas + machine, I know, I'm a genius of Evil) are chickens that got infected with sewer tea. Their legs mutated stretching upwards and their necks also stretched so that the sewer tea glandules that mutated inside the chicken can secrete the gas more easily.

They don't damage the player on collision or anything like that. They just wander from one side of the room to another, coughing sewer tea from time to time. A true danger if you're low on gas masks.

And that's all about enemies for today. Later on during the week I might post the rest of mutations that are finished, but as for now I will focus on all the rest of stuff that needs to get done:

Also, I will be giving a humble bundle to one random user here in IndieDB among all the people that comment or track Sewer Tea. The selected person will be contacted directly by private message with the URL to redeem his/her humble bundle. All the money goes to different charity organizations (EFF, Child's Play and Watsi).

I really like the animation and sprites in this! I'm gunna track and if there's any way I can help in development (like QA) let me know!

Thanks! When the closed alpha testing time comes, I'll think about you.