The campaign is the core of "Elva the Eco Dragon" and it takes you through a series of steps and challenges that will be different on every scenario. But more than that, those changes will be incremental, so you'll have to face the new ones and the previous ones.

Remember: you have a manual and videotutorial here.

The initial Early Release of “Elva the Eco Dragon” includes a campaign with initially four areas or scenarios. These four scenarios will be included in the game from day one, and new ones are being developed. The main campaign menu and every scenery or areas are: 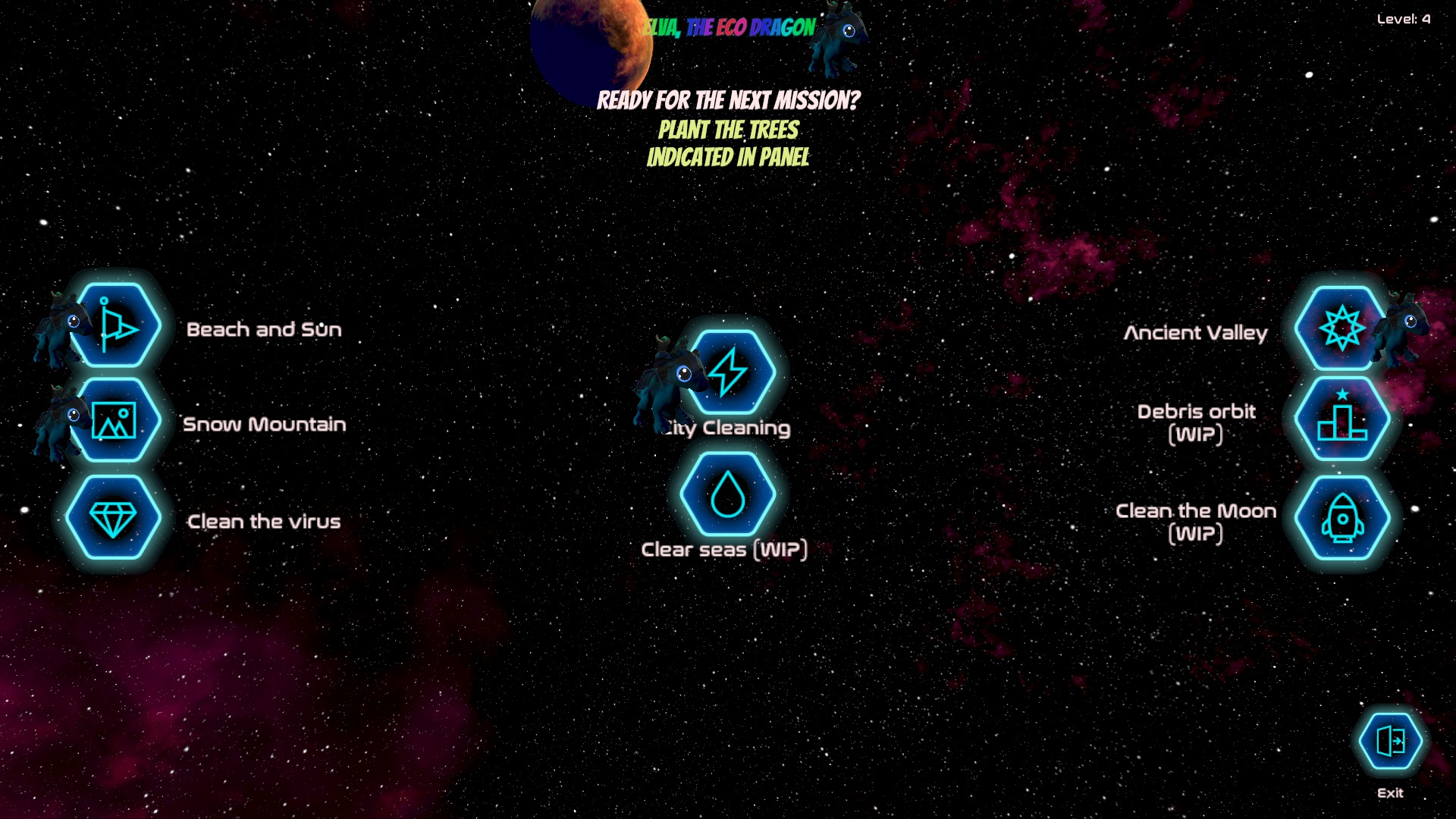 Campaign menu. Every time you win an area a new icon will be activated and Elva will be there waiting. 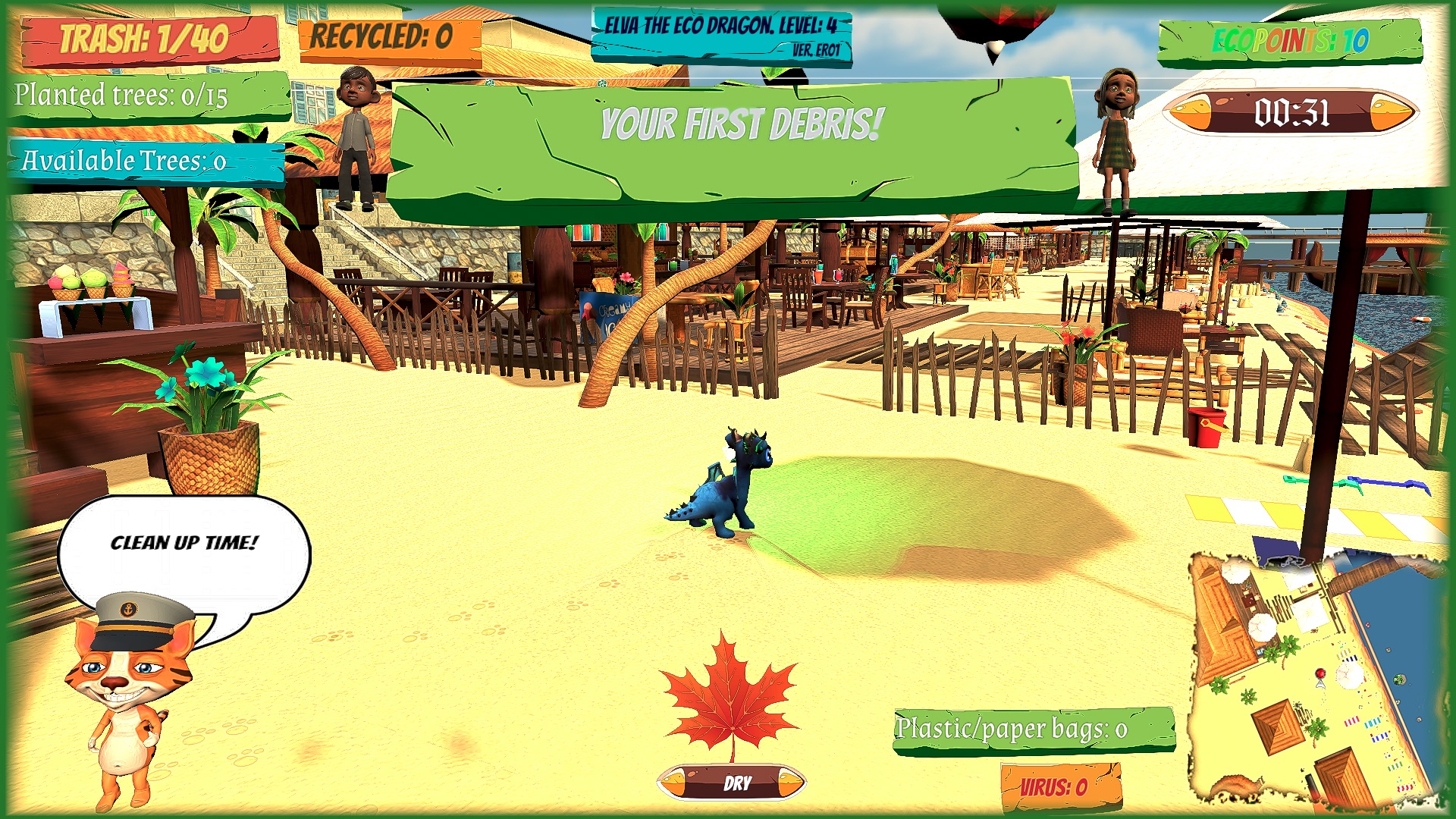 Beach and Sun: the first area you'll play and the area where the interactive tutorial develops. Remember: we recommend playing the tutorial, the game is easy but it's always good to start with the details.

Basically with the 3 initial levels you’ll have to deal with debris and garbage. The big ones will go into a transport (ship, airplane, zeppelin) and the small debris will have to be recycled by you at the correct recycling depot. 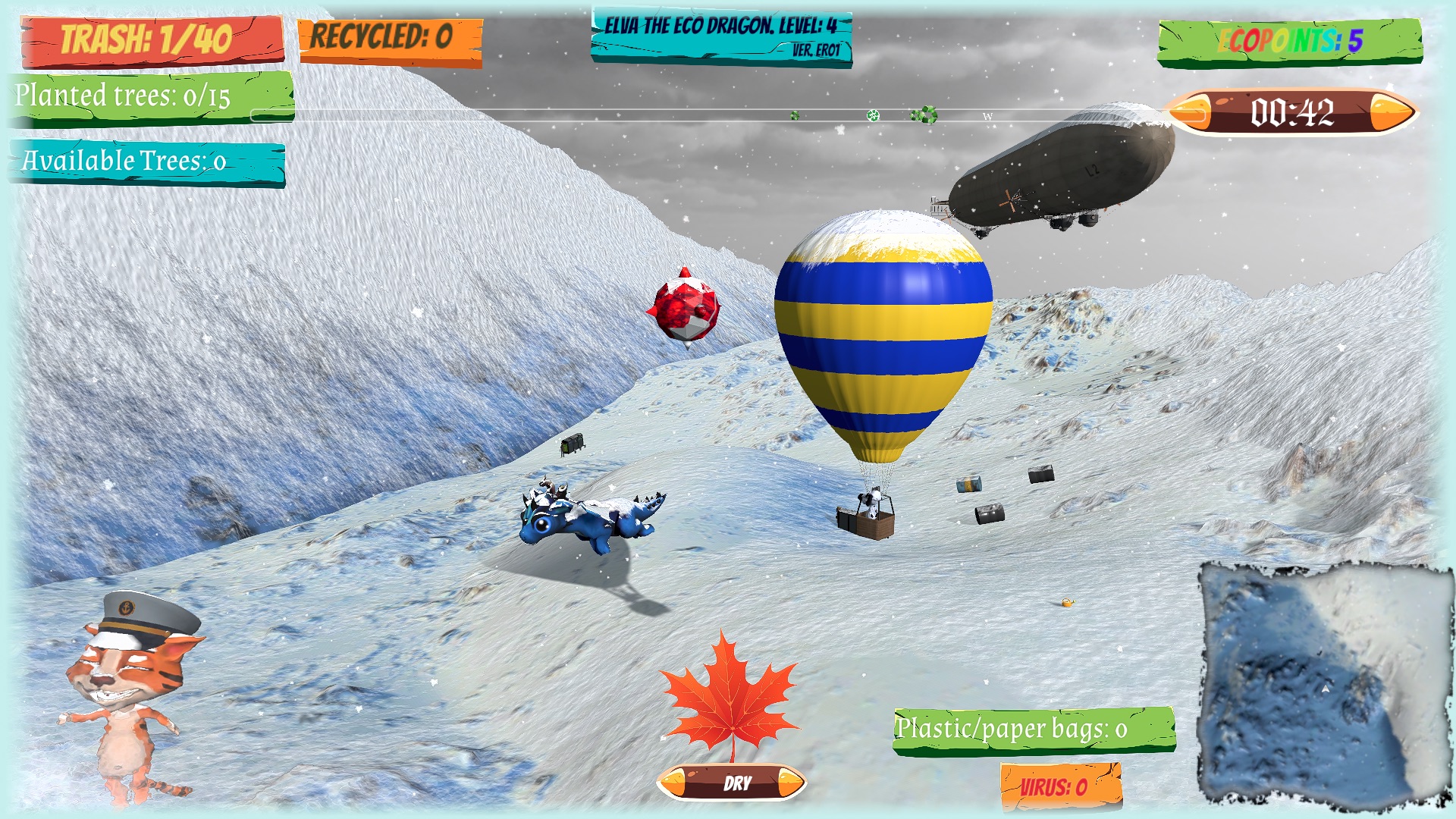 Snow Mountain: Elva has sent a Zeppelin to recover the main debris in the mountains. Did you know some of the most important mountains are full of debris and garbage?

Snow Mountain is a cold and windy place. Levels 4 to 6 will include more challenges, like planting trees (yes, even mountains will get their own trees according to the place) to create forest that will get you paper and allow the animals to appear (hawks in mountains, other animals in temperate places). You’ll also have to deal with the problems of level 1 to 3. 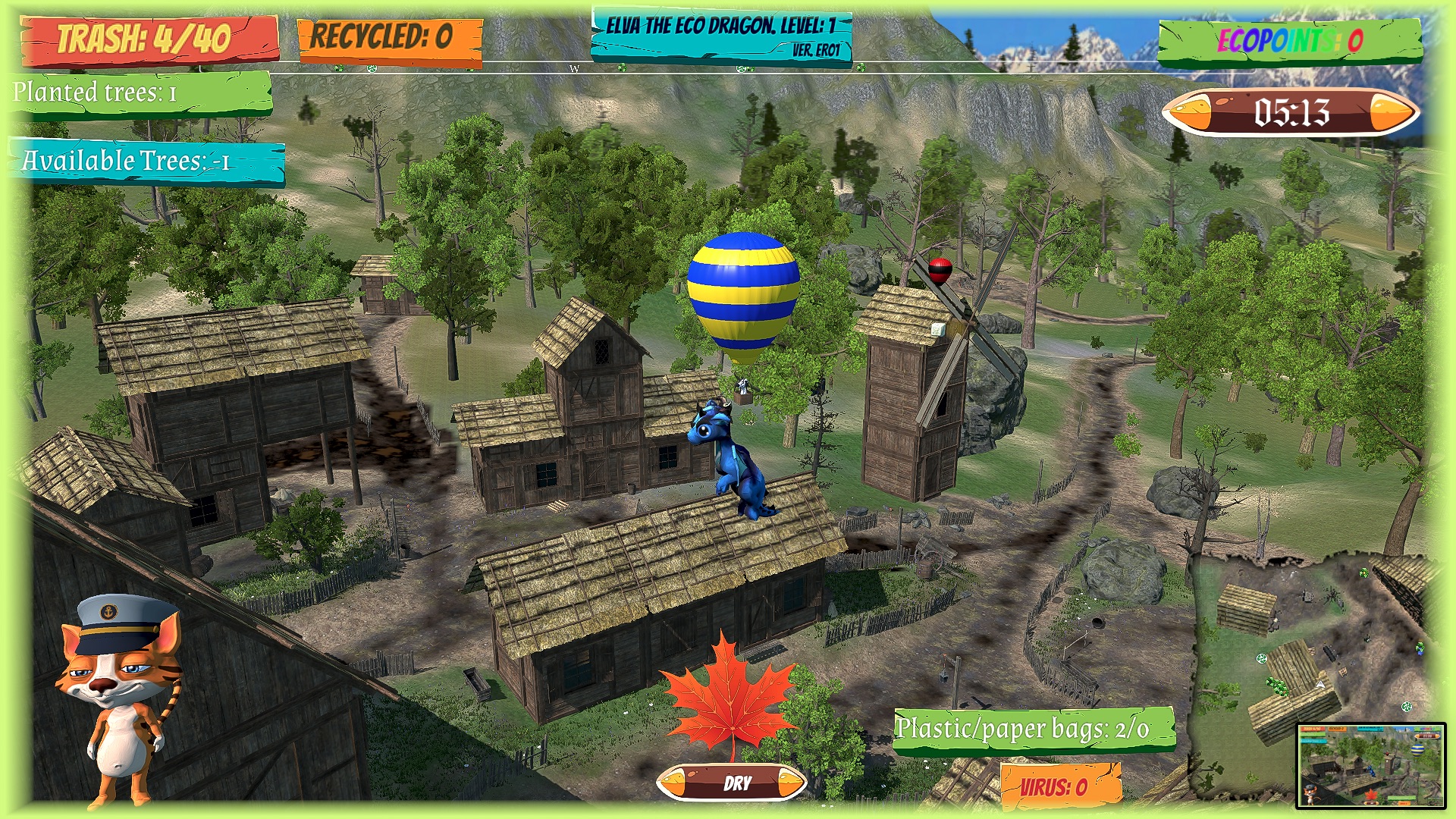 Ancient Valley: An old village with wood constructions and a quiet place that needs your cleaning work. And levels 7 to 9 will include helping people change their plastic bags for paper bags, but first you’ll have to plant trees in order to get the paper. 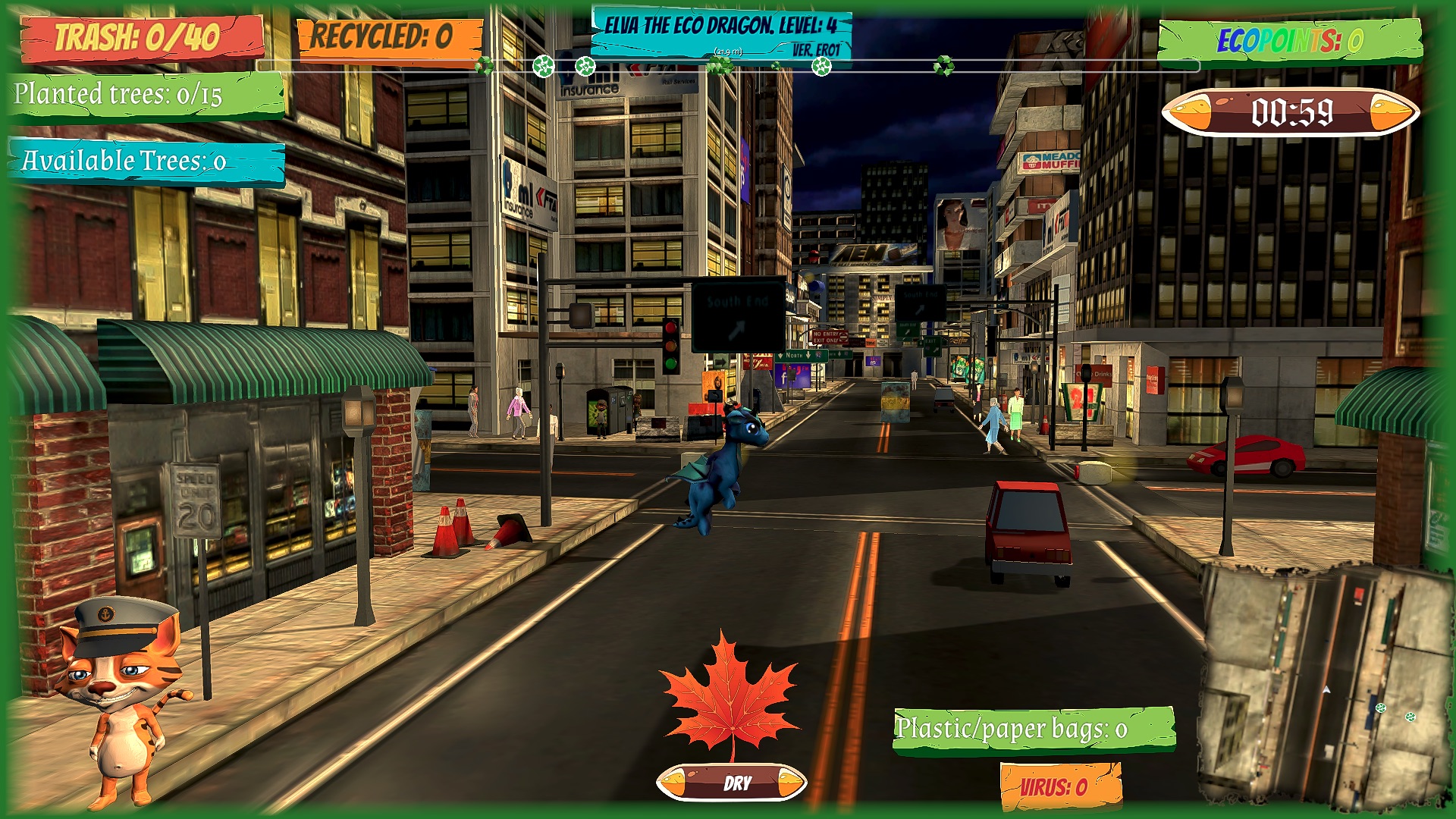 We all know that cities are places that need to be cleaned constantly and with many resources. They’re also a place where diseases are everywhere. Levels 10 to 12 will need you to find bacteria and viruses to be cleaned, and also you’ll have to clean smoke from the aire so people can breathe with no consequences.

Active after the 4th level. Just clean the virus spreading everywhere. Try to clean those virus in the shortest time.

When an area has been won you can play it again with the campaign menu. But if you click here, a random area will be loaded with new hidden surprises, and everything will be really fast. Take your medicine before playing.

These areas are in development and will be included for free in the game after release, once per month.

This area will arrive some time later after the release at no cost. Clean the seas and help wild fauna to be free.

This area will arrive some time later after the release at no cost. The space is full of debris. Go with Elva to the space and clear the space of debris. The International Space Station will be grateful.

This area will arrive some time later after the release at no cost. The Moon has been colonized. And, as usual, many debris is everywhere. Take your rocket to the Moon and clean our satellite.

Last, but no least, we're developing new videos and documentation. As you can see yes, this is an early release, but we think we're providing some good stuff to being with the game.

And that's all for now, have a nice and clean day!